Haval H9 the latest to not meet the highest Australian safety standard.

China’s best-selling SUV manufacturer, Haval, is one of the newest brands to enter the Australian market, but its H9 flagship vehicle was recently tested for crash safety by ANCAP and failed to achieve a five-star rating. A Chinese-built vehicle is still yet to earn ANCAP’s highest rating.

When the seven-seater Haval H9 - the largest in a three-car line-up which also includes the H2 and H8 SUVs - was put forward for testing, the company’s engineers were confident of a five-star result.

However, ANCAP awarded the H9 a four-star safety rating after it scored 30.65 points out of a possible 37. The H9 was unsuccessful in the frontal offset crash test, recording inadequate results for driver protection, and ANCAP’s report found it particularly lacking in lower leg protection and with a slight risk of serious chest injury. 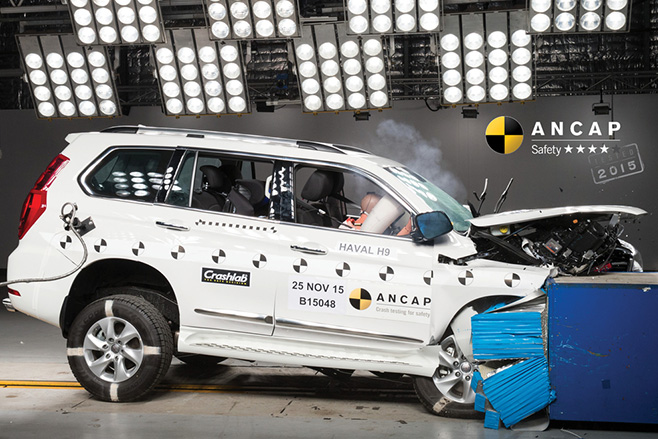 “Our engineers have been working very hard to deliver a five-star safety rating and all our testing indicated that we would achieve this result,” said company spokesman Andrew Ellis. “The results of the ANCAP test were clearly unexpected.”

“It’s disappointing to get so close,” said Ellis. “We’re committed to a five-star rating.”

Data from the ANCAP tests has been supplied to Haval engineers in China, including the head of research and development, Suguya Fukusato. The company has vowed to improve its product and have it re-tested as soon as possible.

ANCAP responded saying that Haval would need to make structural changes to the H9 and provide evidence of the changes in order to qualify for a re-test.

“[H9] didn’t fall down in any other areas. It’s not lacking in technology,” said ANCAP spokeswoman Rhianne Robson. “If Haval make structural changes and frontal offset tests improve, it should be in the realms for five stars.”

Haval is the premium SUV spin-off of Chinese car brand Great Wall and this four-star result is an improvement over earlier vehicles, in particular the Great Wall V240 dual-cab ute, which scored a two-star crash safety rating in 2010.

ANCAP has no plans at this point to test the other two vehicles in Haval’s line-up, though the company did add that new entrants to the market are of particular interest.