These are the first unofficial images of Citroen’s soon-to-be-launched C3 which have been leaked by a French website ahead of the car’s official unveiling – slated for midnight tonight Australian time.

Whichcar understands the heavily updated Citroen C3 will be available in three options; a 1.0-litre and 1.2-litre petrol engine as well as a 1.6-litre diesel engine with the larger of the petrol versions likely to be offered in a couple of different specifications.

Judging by the images, the latest generation is inspired by its larger C4 Catcus counterpart, boasting robust side-mounted Airbump panels and an almost-SUV stance.  The colour-contrasted roof, side mirrors and bumper-mounted spotlights are in line with the firm’s strategy of wanting to be slightly left-of-centre in the increasingly crowded small-car marketplace. 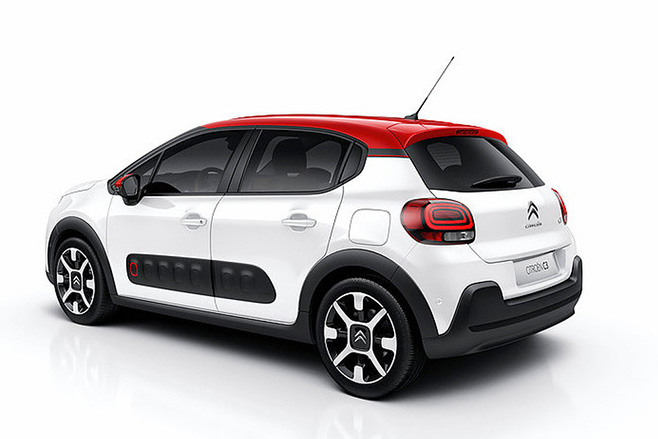 Citroen’s Australian operations are taking a somewhat cautious approach to the new C3. Although the present model sold out in Australia more than 12 months ago, Tyson Bowen – Citroen Australia’s Communications Manager, says that negotiations with France following tonight’s launch will determine whether it will hit showrooms down under.

“Once the new model is released we’ll go into negotiations with Paris regarding local pricing and specification, and if it meets the needs of the Australian marketplace then we’ll push to secure the vehicle.”

While Bowen wouldn’t be drawn on the new C3’s pricing structure, he said that if the negotiations were successful, he’d expect to see delivery in Australian markets within six to nine months after its European launch.

The reveal will mark the compact hatch’s third major upgrade since its 2002 release, and tonight’s unveiling kickstarting a long line of heavily updated products expected by 2021. 12 new vehicles expected within the next five years; seven of which due as early as 2018.