The hugely aspirational Lamborghini Huracan has been treated to its first significant update since the model launched in 2014 and, unlike some more mainstream vehicles that make do with a new grille and a lick of paint, the 2019 Evo is a very different animal. 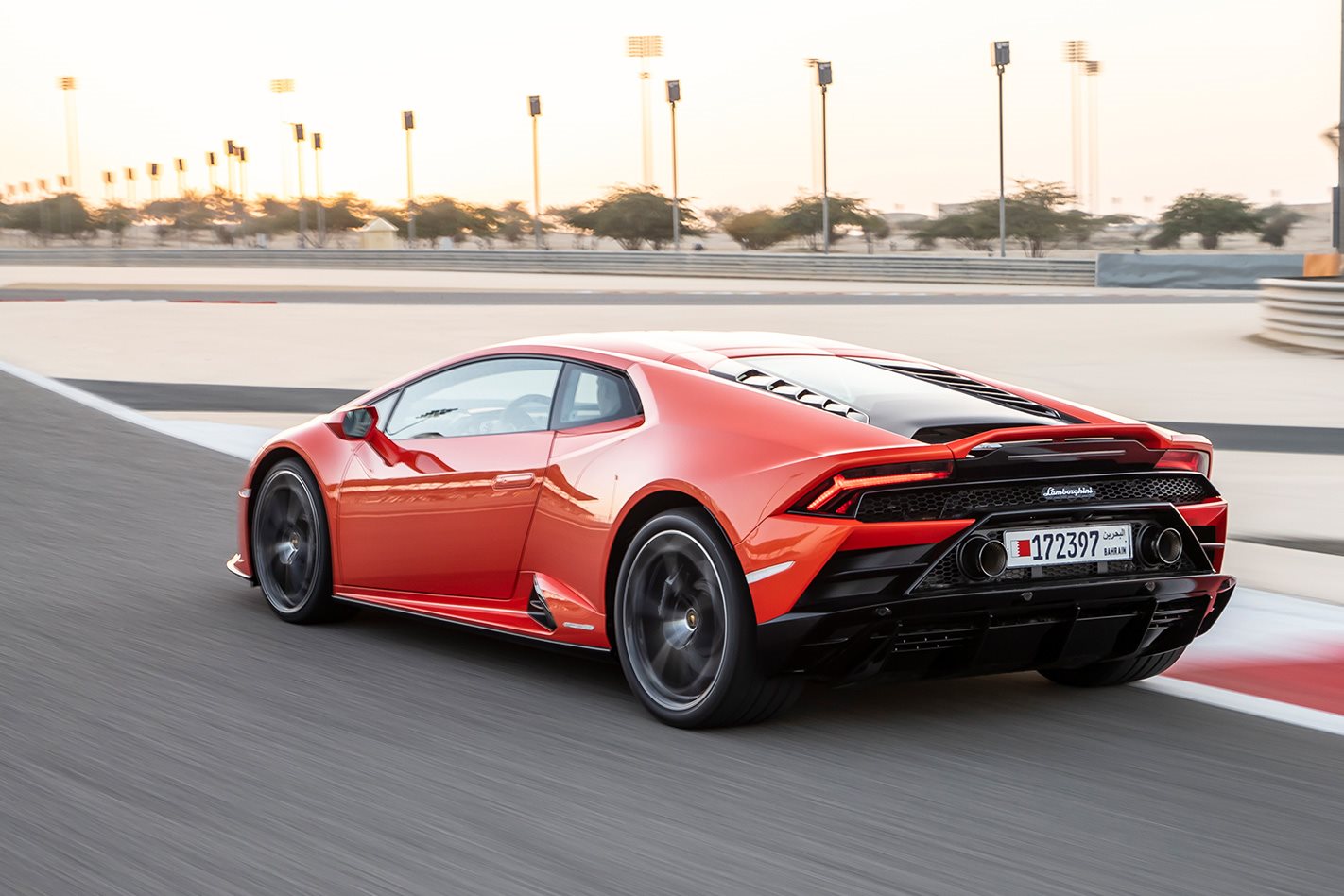 Here are our six favourite features Lamborghini has introduced with the newest Huracan.

Pics or it didn’t happen
Available as an option, the Evo can be equipped with a new dual-camera telemetry system which is incorporated into a new 8.4-inch touchscreen. When blasting around your favourite circuit, the on-board cameras capture the view from the front of the car and inside the cabin too. 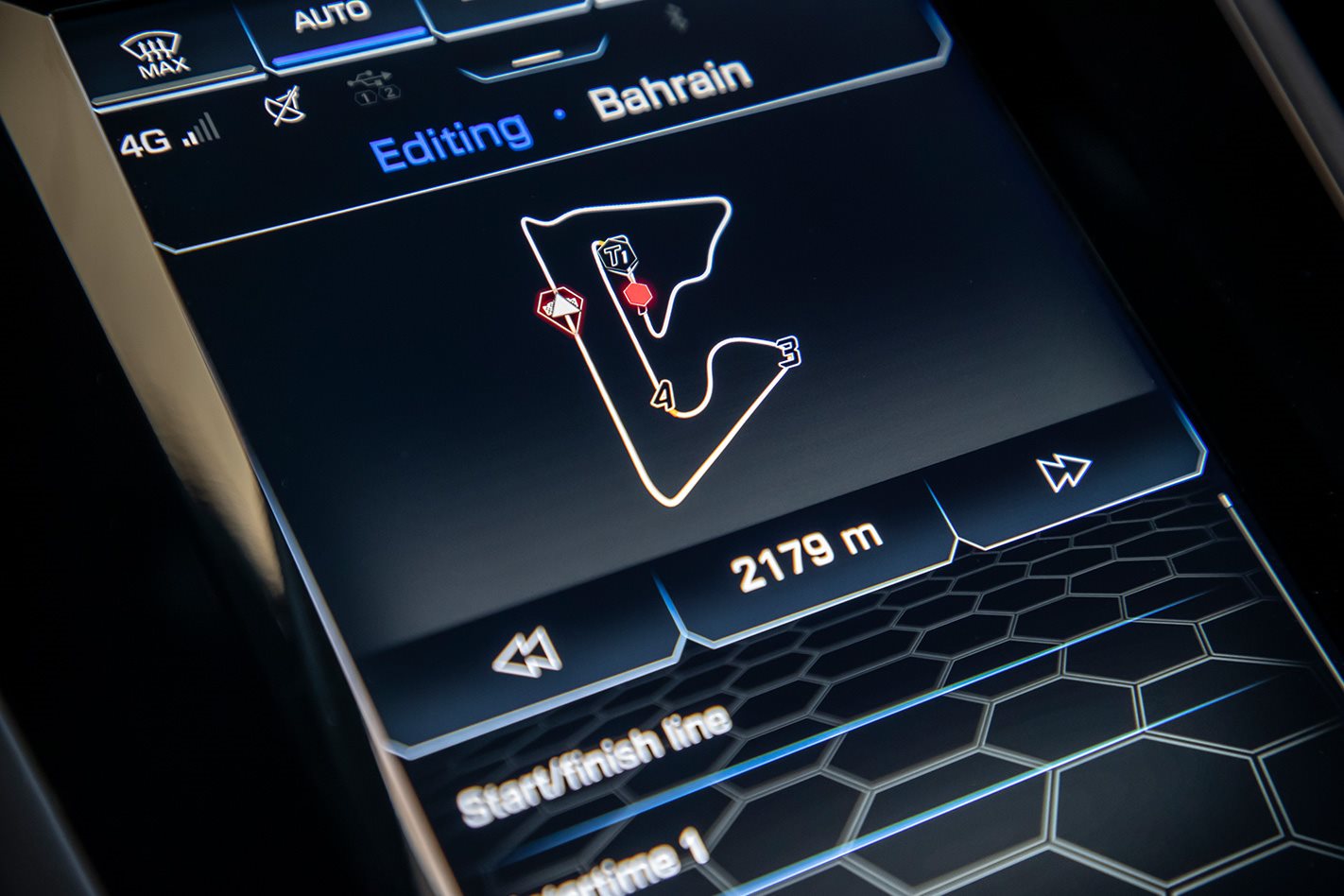 The footage is complemented by a GPS map of your progress along with lap times, maximum speed points and even G-force readings. So there will be no questioning your PB or heroic powerslides.

Pinch and swipe
Gone are a number of switches and knobs with many information and entertainment functions consolidated into the new portrait-oriented screen. The result is a cleaner dash layout, simpler cabin design, and operation similar to a smartphone.

Finding your way around the various menus is like using a smartphone, says Lamborghini. 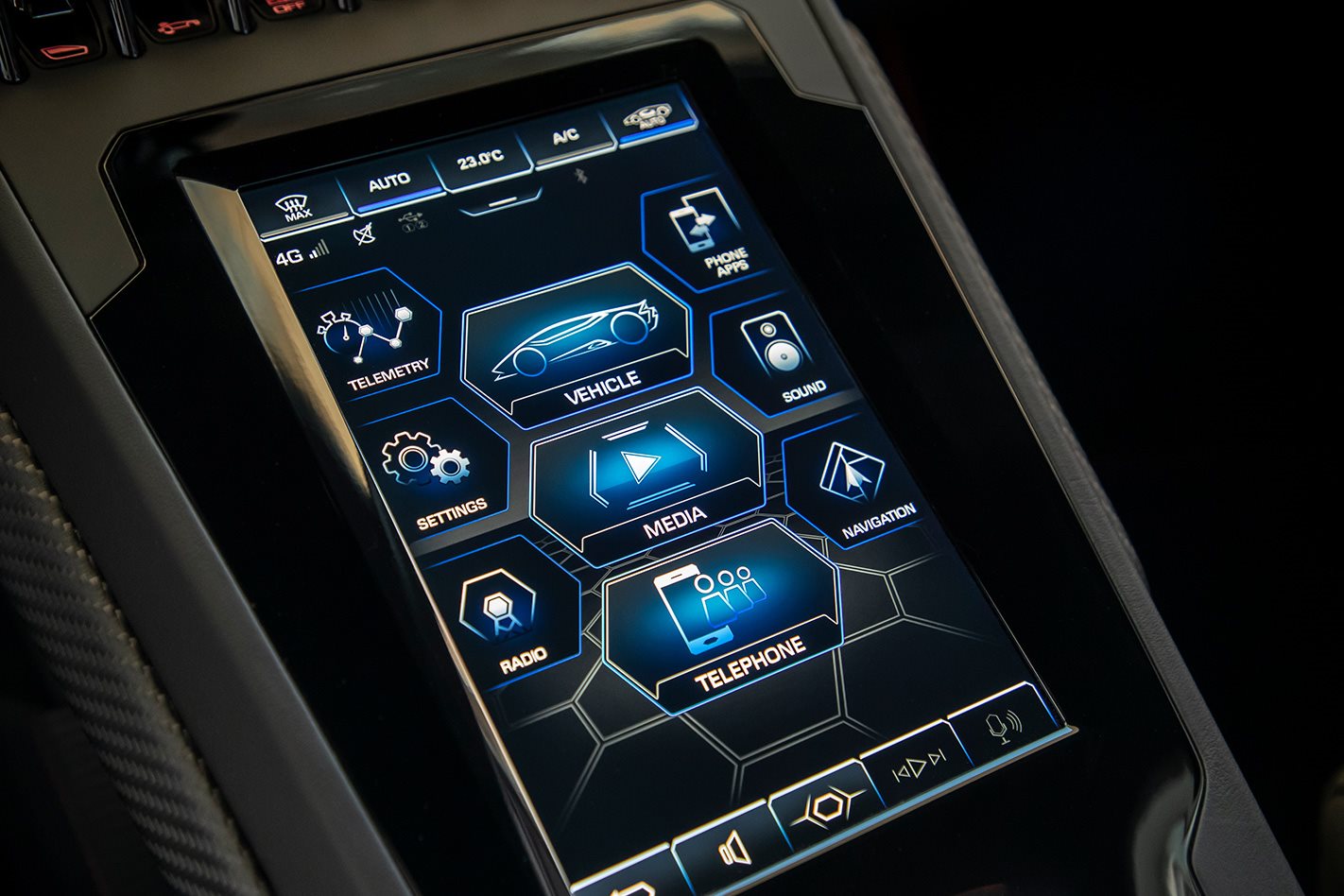 Nose job
Unlike some mainstream models, the Huracan has a massive nose cone which enabled Lamborghini’s designers to significantly restyle the front end without having to touch expensive sheet metal. As a result, there’s 16 percent more cooling airflow and company’s trademark Upsilon has been incorporated.

For the record, we also think it’s the most handsome Huracan conk to date. 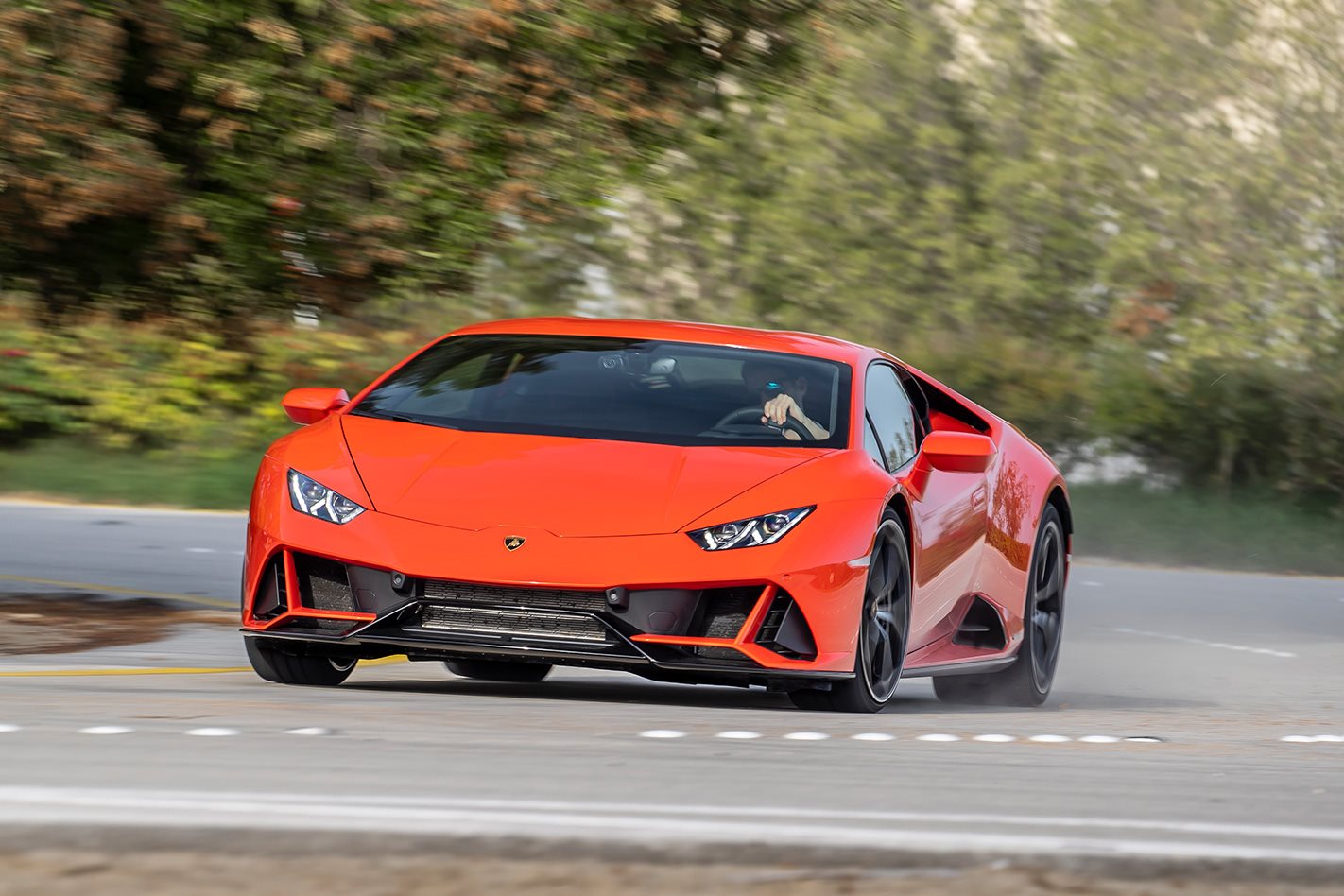 Slippery tail
And it’s the same story with the back end. A massive diffuser has dramatically improved underbody airflow in conjunction with new deflectors. Its boot spoiler now has a slot that helps increase downforce and rear-end stability, as well as drawing hot air out of the engine bay using the venturi effect.

The new Huracan doesn’t generate quite as much downforce as the Performante, but it is the most aerodynamic since the model was introduced. 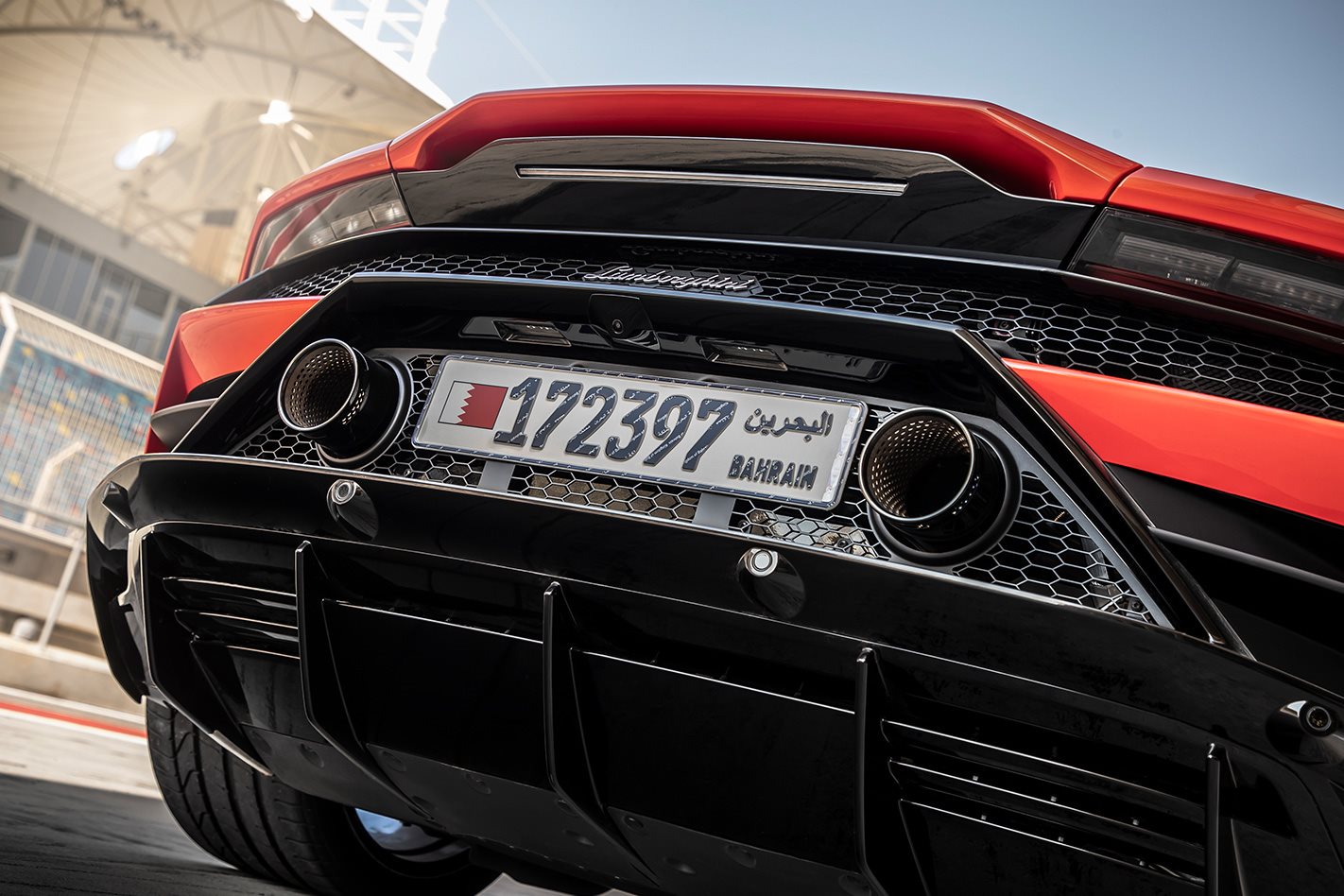 Higher volume
Unlike the first Huracans, the Evo has adopted a high-exit dual exhaust that was introduced by the Performante. With shorter pipes from the engine and more compact silencers, the Evo is not just louder with the bi-modal valves opened, it’ll actually shoot blue flames under hard acceleration.

Get really close and you’ll even see the catalytic converters glowing white hot. 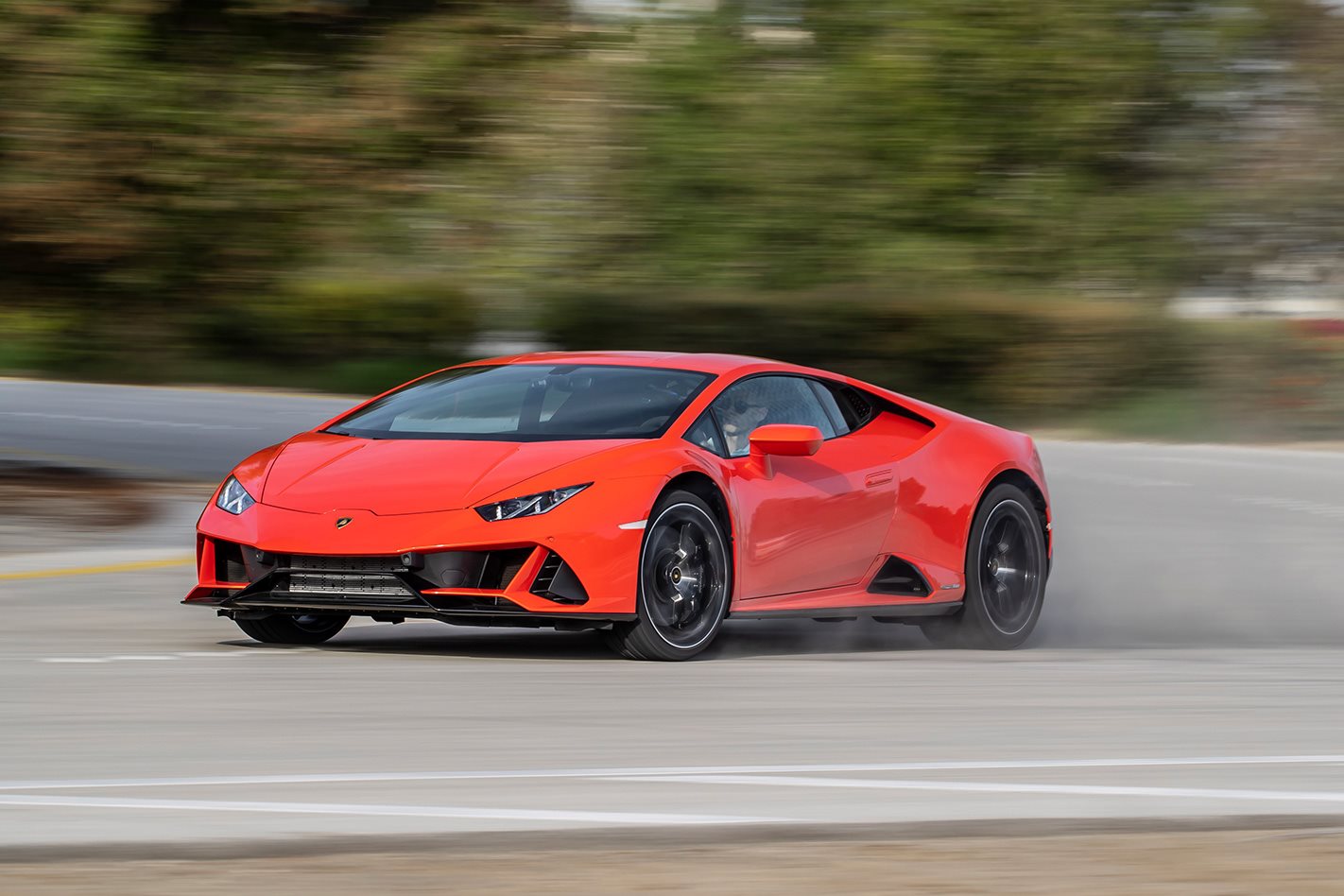 All for one
Pinched from the Huracan’s Aventador SVJ big sister, rear-wheel steering is now available for the first time. A low speeds, the rear wheels turn in the opposite direction to the front axle for greater maneuverability - as if its wheelbase has been shortened. At higher speed, the rear wheels steer in the same direction which allows the car to almost crab for a far more stable reaction.

It’s all overseen by a new LDVI central processor that masters the dynamic systems with predictive technology to anticipate your every need. We’ll settle for not spinning.