What a Jeep Grand Cherokee taught me about stereotypes

A trip home in a Jeep Grand Cherokee taught me more about automotive stereotypes than any Internet meme ever could.

There’s nothing I love more than challenging a stereotype. It’s for this very reason I decided to drive a Jeep Grand Cherokee to visit my hometown, Adelaide.

Stereotypes are in abundance in the automotive industry – it would seem the car world can be more judgmental than a movie critic at an amateur’s film night.

For the most part, stereotypes are a historical reference but things change, companies develop and technologies have come a long way.

In my former life as a journalist for 4X4 Australia, I spent a lot of time driving Jeeps, from Wranglers, Grand Cherokees and even the latest Renegade. Even as each of my fellow off-roaders laughed at the concept of my choice of 4x4, I managed to get through every trip without fault – when my Jeep sat safely at the top of the mountain with no assistance from another vehicle, it earnt me instant bragging rights. And yet, the jokes continued.

I’ve never really understood it. Stereotypes exist, but I am yet to see them live up to reality. Take Volvo for example; often labelled ‘mummy cars’, Volvo has an excellent reputation for safety, which of course is true. But as far as the ‘boring’ label goes, I don’t see it in its modern cars. I drove a V40 on a skidpan recently and I loved it. Then there’s Volvo’s newest member of the family, the XC90 – the promotional video for this feature Avicii, so it must be cool. 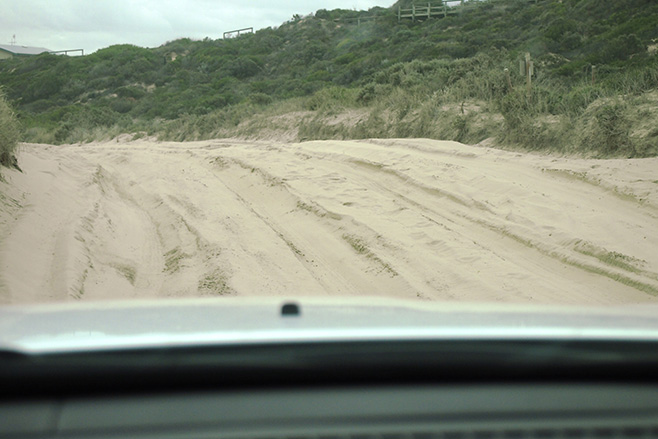 It was time to see what these stereotypes were about and the test vehicle of choice was a Jeep Grand Cherokee Overland. The plan was to see the car through the drive to and from South Australia, take it on a sandy off-road trip and then, its biggest challenge, a one-year old’s birthday.

First up was the epic journey home. The Grand Cherokee (GC for short) made for a happy eight-hour drive. There is one stand out thing about the Grand Cherokee – it comes packed with gear for a decent price. With Nappa leather, dual climate control, heated front seats, it was pretty easy to get comfortable.

At the time, it was also the first car I had driven with adaptive cruise control which was fast becoming one of my favourite features. I could go into lengthy detail about technology and complacency (read here) but on a straight road, with speed limits changing, it was a godsend.

Eventually I made it to Adelaide without problem. The Grand Cherokee didn’t falter. Nor should it. But it was comfortable, easy to drive and aside from a hum coming from the fuel pump (which was replaced shortly after) there was very little to complain about.

After a few days driving through the luxuriously traffic-free Adelaide, I was starting to get the adventure itch and was ready to put the GC’s Selec-Terrain traction control system to the test. I didn’t have off-road tyres, a bulbar or a snorkel, so really the Jeep looked like your everyday SUV. I started to feel like a sparrow set amongst the eagles and I felt like I needed to prove my worth. 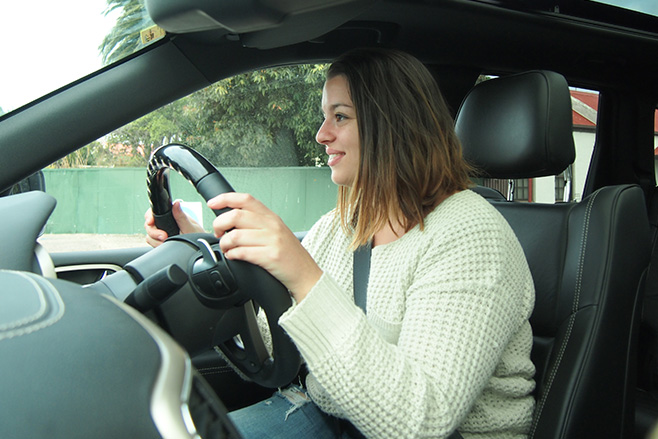 Unfortunately for Radelaideans, there’s not really a lot nearby when it comes to off-road. Luckily for me, my family are frequent visitors of the Fleurieu Peninsula which plays home to a sand-driving mecca. It was time to flick up some sand and see what this baby could do.

The Fleurieu is a popular summer destination – wineries, coastal towns and beautiful beaches. Keen fishers and families can explore Goolwa and its 11km sand drive to the Murray Mouth, where the Southern Ocean meets the River Murray. Perfect! Kilometers of pure sand driving was just wanted I needed to test the GC’s off-road ability.

I put the Jeep’s selec-terrain dial into sand mode and we were off. Granted that the only way to the Murray Mouth is via 4WD, you can imagine the other vehicles I was surrounded by. My wild imagination kicked. In my mind, a group of men in the big, tough-looking 4WD behind me were laughing at the woman in a Jeep attempting to get to the Mouth. Then, in a Mad Max: Fury Road style race (obviously I was Charlize Theron), the Jeep took off as I yelled “sayonara bitches” and I zoomed down the ‘Goolwa Highway’ watching them eat my dirt… or in this case, sand. It didn’t quite happen like that, and chances are the men weren’t laughing at me nor were they aware we were racing – regardless, I still won.

But I felt very confident in the GC and the only thing making me nervous about the drive was the handful of kids running around collecting cockles (otherwise known as bivalve). 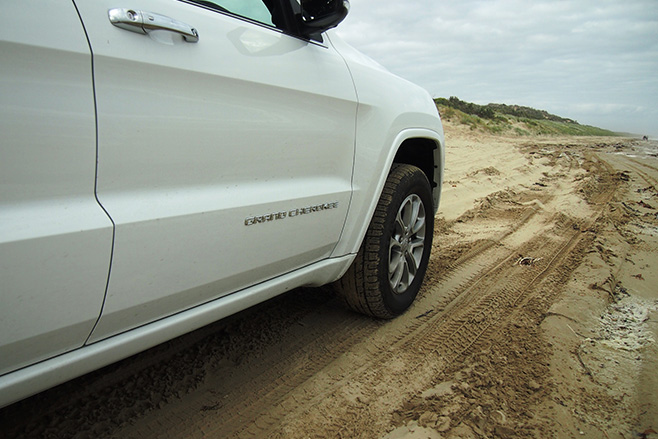 Did I make it to the Mouth? Well, in short, no. But I didn’t get stuck either and I only had to turn back because I mucked up the tides and I really didn’t want to get stuck. Off-roading, tick.

So far, the Grand Cherokee had disproved the Jeep stereotype. No nasty glitches or costly problems.

It was time to put it to the final test. A first birthday party. I loaded the Jeep with as much gear as I possibly could. Everything but the jumping castle needed to get to the park, plus a couple of passengers. The GC could fit plenty of gear, enough to move a small apartment. The biggest letdown in the Grand Cherokee was its lack of a seven seat option. But, we’re talking about stereotypes here, not the GC’s lack of ability to facilitate two extra bums, which wouldn’t really be a problem for a small family.

Aside from all the “You’re going to need a bigger boat” and “Anna bought a Jeep” jokes, I was sad to see the GC leave my driveway.  When I finally arrived back in Melbourne, I was no closer to solving the mystery of the stereotypes.

There’s no doubt some people don’t like particular car brands for various reasons and experiences, and that’s ok. No car is perfect. But should you rule a brand out based on a reputation? I say give them all a go, you might be pleasantly surprised.

Click here to read the full review on the Jeep Grand Cherokee.