Mazda’s flagship gets upgraded with solid improvements to an already impressive package. Mazda is on a major roll.

It feels like the third-gen Mazda 6 has only been around for five minutes, but Mazda’s on a mission to keep its range as fresh as Kate Upton’s complexion, and this in the ‘new’ 6.

Actually, the outgoing model’s been in market for two years, and program development chief Hideki Matsuoka says the updated car’s a product of Mazda’s Kodo design and Skyactiv tech maturing and improving over time. Adding, the overall aim of the refresh was to improve the flagship model’s sophistication in design, dynamics and safety.

There are four grades (Sport, Touring, GT and Atenza) available across sedan and wagon, with a choice of 138kW/250Nm 2.5-litre petrol four or 129kW/420Nm 2.2-litre turbodiesel four, both matched to a six-speed auto transmission. 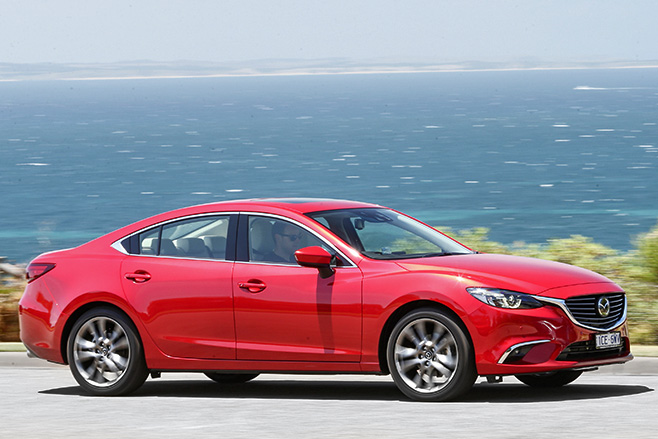 The new 6 is launching into a medium car market, which by Mazda’s own admission, is “doing it tough” because of this country’s seemingly insatiable appetite for SUVs. That said, Camry clobbers the segment, consistently out-selling the Mazda 6 (in second spot) almost three-to-one.

But that doesn’t mean the competition’s sitting on its hands. Subaru’s already lobbed the new Liberty/Outback into the mix, there’s a heap of fresh metal this year from the likes of Ford (Mondeo), Holden (Insignia), Hyundai (Sonata), Kia (Optima) and VW (Passat). And just to keep everyone honest, Toyota’s upped the ante with a Camry update. So this is Mazda’s pre-emptive strike to maintain the 6’s position as best of the rest. 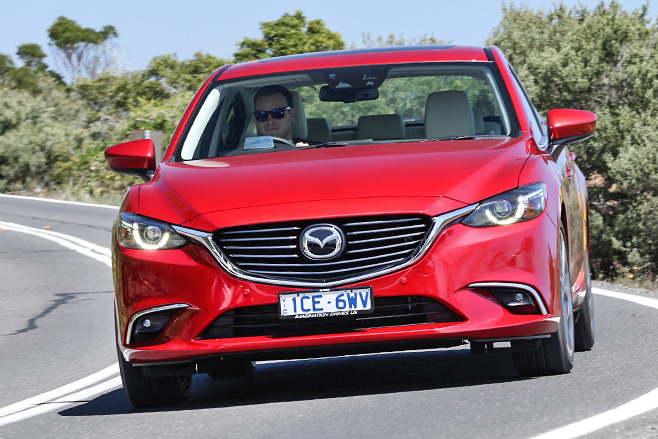 In terms of design, the 6 more strongly reflects Mazda’s Kodo ‘eye of the cheetah’ expression, the look reinforced by a distinctive front and rear lighting signature. The grille has also been tweaked with more clearly defined fins.

Mazda says a sizeable number of existing 6 owners have criticised the car’s interior for being “dark and drab.” So a lot of focus has gone into the cabin design, with the biggest changes being the seven inch MZD Connect colour touch screen standing proud of a more sweeping dash top, a refreshed centre stack and inclusion of an electric park brake.

The instrument binnacle has also been made lower and sleeker, HUD (Head Up Display) is included on premium variants, and cabin storage has been increased.

A range of new trim materials, including a rich, dark red finish on the dash and door cards, as well as brighter decoration and ornamentation deliver a richer, more premium feel.

Dynamically, the move to revised dampers on raised mounts front and rear, as well as new bushes for the front lower suspension arms is designed to improve ride comfort and NVH (Noise, Vibration and Harshness).

Petrol models also pick up a ‘Drive Selection’ control in the console which, when switched to Sport, sets the transmission to automatically select first gear from rest, and once underway, increase the amount of torque delivered for a given amount of accelerator pedal travel.

Headline safety inclusion is BMW and Merc-equalling adaptive LED headlights, fitted standard to all models above the base Sport; a first for Mazda. Among other things, they selectively drop out part of the main beams to accommodate oncoming traffic, using data from a smart on-board camera. 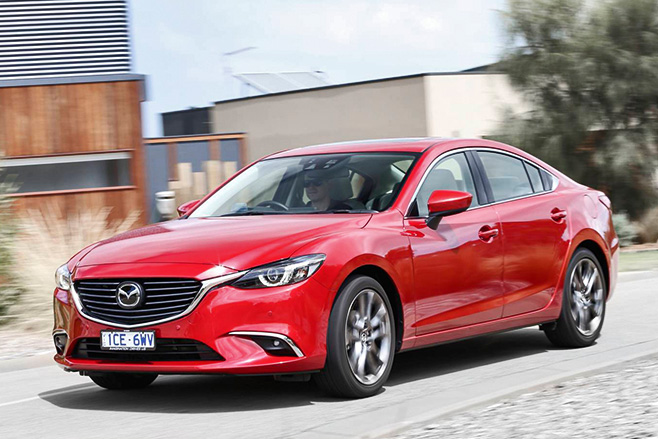 We’ve had no major complaints with the 6’s dynamic performance or ride quality, but maybe we should have because this car’s a distinct step forward in both departments.

The launch program took in a mix of open highway and twisting hills around Albury Wodonga on the NSW/Victoria border, and we drove the turbo-diesel in second-top GT spec, and the petrol four in entry-level Sport trim.

As well as the suspension work, there’s extra sound insulation and improved door sealing in all models, and first impression of the diesel is how quiet and civilised it is, the six-speed auto cycling through its ratios sweetly, with cabin noise levels at 100km/h on a coarse chip surface exceptionally low.

It’s no powerhouse, but it’s not a slouch either. Peak torque arrives at 2,000rpm, and there’s enough urge for swift overtaking and stress-free cruising. Steering weight is light, but road feel is good, the 6 is well balanced, and the nose is impressively sticky in quick cornering.

The petrol engine feels sharper, especially in Sport mode, and once you’re into the mid-range its slight power advantage and more free-revving nature delivers a stronger push in the back as the rev counter swings towards the top end. 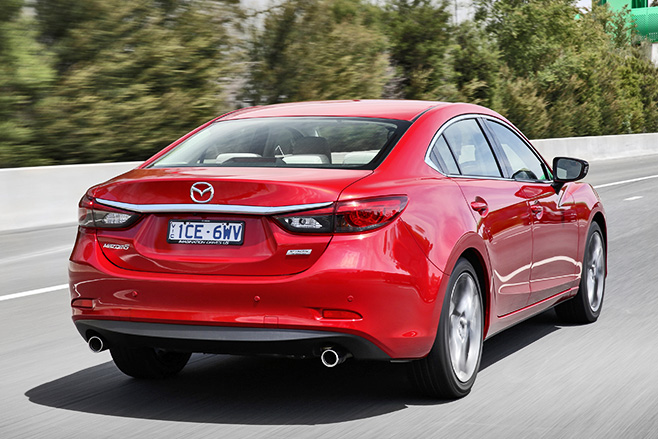 The interior makeover gives the Mazda flagship an even more premium feel. The seat cushions (front and rear) have been re-profiled for greater comfort, and proved their worth after several twinge-free hours behind the wheel.

Mazda says the exterior mirrors have been repositioned for a better rear view, although we struggled to sense a notable improvement.

But on the entertainment front, even the base Sport picks up six-speaker audio as standard with Bluetooth phone and music connectivity, internet radio, USB inputs and steering wheel controls. Anything above that cops a Bose 231 watt amp and (11) speakers. Nice.

A new front console with roll-top storage bin not only looks cool, but extra padding for knees down each side, and elbows along the top is welcome. 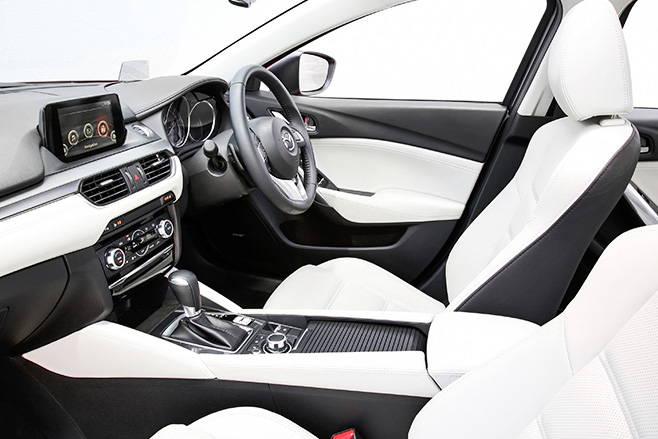 More grunt would be a plus for both engines. Come on, as we’ve said before, there’s plenty of planet left, and enough environment for everyone. Maybe a little less sky, and a bit more activ(e)?

And despite good road feel, the overly light steering would benefit from more balanced (variable?) assistance.

Almost all prices have been reduced, with more tech and features added; pricing covering an $18k spread between $32,540 for the petrol Sport sedan, to $50,920 for the diesel Atenza wagon. That’s definitely competitive, bordering on aggressive.

Would you take the Mazda 6 or Subaru Liberty?

Close, but the Mazda takes it on the basis of superior dynamics, particularly ride comfort. On a more subjective call, we also think the Mazda tonks the Subaru out of the park when it comes to visual appeal.

Click here to read the full review on the Mazda 6.