In the past, Mercedes-Benz’s C63 was Liam Neeson. It had a bit of older man about it and looked serious and a little bit reserved, but if you dared to take it on you’d find that it was, surprisingly, pretty goddamn hard. You certainly wouldn’t want to kidnap its daughter.

Now there’s a new one and, much like the latest version of its dear old enemy, BMW’s M3, any semblance of subtlety - its former Q car-ness - is gone, and someone appears to have been shovelling steroids into the fuel tank.

The new C63 S - the range-topping, even harder-core version which is the only one we’ll be offered locally, because Aussie AMG buyers are all mental - is more like Chris Hemsworth. Or, considering it’s still aimed at the slightly older, slightly richer man, Arnold Schwarzenegger.

The styling is now more in your face, more pumped up, and undeniably sexier, with an F1-aping chin, go-faster strakes down the sides and a neat rear end with cool quad pipes.

That sporting, track-day-special intent carries over to the interior as well, which gets the no-nonsense - and very little padding - sports seats from the awesome A45, as well as a racing-car steering wheel, giant, colour head-up display and splashings of carbon fibre everywhere.

The intent, as Christian Enderle, AMG’s director of engine and power train development told us, was to create “a seriously tough C63” that reflects his brand’s mad passion for motorsport.

It was Herr Enderle’s department that had to cope with the move away from its predecessor’s vast and sonorous 6.3-litre naturally aspirated V8 to something smaller, turbocharged and more fuel efficient.

What they’ve created is an engine that’s theoretically too small to perform like a proper V8, at a mere 4.0-litres, yet produces 50kW and 25Nm more than the old swords-and-anvils version. That adds up to a HSV-humbling 375kW and a monstrous 700Nm of torque, all of which is yours for the plundering from just 1750rpm, resulting in a 0 to 100km/h time of just four seconds flat.

Those numbers look slightly intimidating on paper, but in practice they’re borderline frightening. Forget any fears about bottom-end lag, because the biturbo system the boffins have come up with spools up with all the sudden shoveiness of those gas-propulsion systems that hurl fighter jets off aircraft carriers.

The first few times you put your foot down it’s impossible not to laugh out loud - partly through nerves and partly joy - and then you realise there’s a little detente at the bottom of the throttle pedal travel, and if you stamp through that it goes even faster. And you cackle some more.

The sheer heady temptation of doing this, over and over again, is why no owner will ever get near the impressive claimed economy figure of 8.6 litres per 100km. Benz can describe it as the world’s most economical high-performance V8 in the world all it likes, but in the real world it’s still going to drink like Oliver Reed.

One big concern about the switch to turbocharging was that the C63 would lose its devilish, belly-wobbling growl, but it seems the engineers have, if anything, over compensated. The new S version comes with an exhaust button that opens up a series of flaps to increase the orchestral bellowing from behind you - so much so that we were convinced some of the noise must be fake and amplified through the car’s speakers, as is so often the case these days, but apparently it’s all real.

The percussive bangs and coughs it makes on the overrun are, if anything, almost too loud, and to hear a few of them going down the straight at the Autódromo Internacional do Algarve in Portugal where the car was launched was like being strafed by the Luftwaffe.

As you’d expect for such a hard-charging, focused car, the C63 S was superb on the track, smashing into the limiter at 250km/h down the straight and exploding - metaphorically and aurally - out of the corners.

The steering is sharp and precise but could possibly do with some more weight, even in its Sport + or Race modes, and the chassis is superb. It feels, and sounds, more like a bespoke race car than a four-door sedan with ample room for your children in the back. 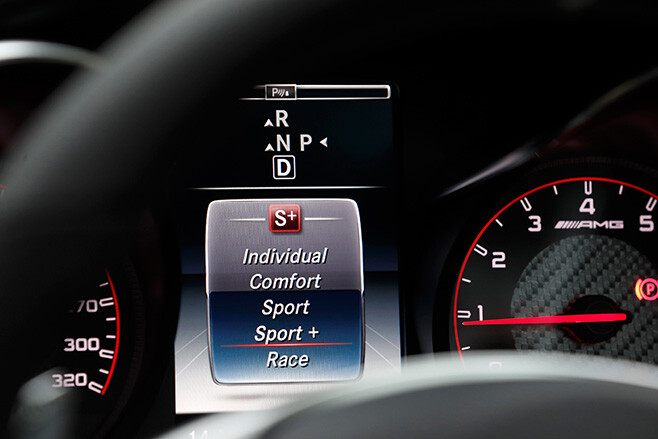 Out on the road, however, this is perhaps the new C63’s one failing. Even in the Comfort setting, the car is so tied down and rides so firmly that we came to fear big bumps, and found ourselves getting alarmingly airborne on more than a few occasions.

It’s not the kind of ride that rearranges your teeth, not quite, but it’s certainly hard enough that you’re always aware that this is, primarily, a performance car. The dual nature this ultimate C -Class used to possess has been hit for six.

Your spine might need rebuilding every few years, because the ride was firm on European roads and could be damn near brutal here, steering just a teensy bit too light in feedback terms.

Mercedes-Benz Australia has made this extremely popular car even more attractive by rolling back the pricing to the same level as its ancestor, the C36, which was launched here 20 years ago. At $154,900, the sedan is $15,000 cheaper than the last C63 was at launch.

Australian AMG buyers have a particular love for the harder, faster, stronger approach - making us one of the skunkworks’ best markets, on a per capita basis - and they’re going to seriously love this seriously tough C63.

What BMW doesn’t offer you is a station wagon version, and the C63 S Estate is an absolutely fantastic load hauler, which loses very little against the sedan and would be my pick, even over an Audi RS6 Avant. It also seems like a comparative bargain at just $157,400.

Click here to find out more about the Mercedes-AMG C63 S.