Our first local drive of Mini's performance flagship finds a rewarding hot hatch with speed and class to burn.

And now, for those wanting to take their hot hatch experience from Jalapeno to Habanero, the latest Mini John Cooper Works (JCW) performance flagship has arrived in Australia.

Compared to the Cooper S, the new JCW adds 20 per cent more power (+29kW) and seven per cent more torque (+20kW) to reduce 0-100km/h acceleration by more than half a second. It’s also 0.2sec faster than the previous generation JCW. 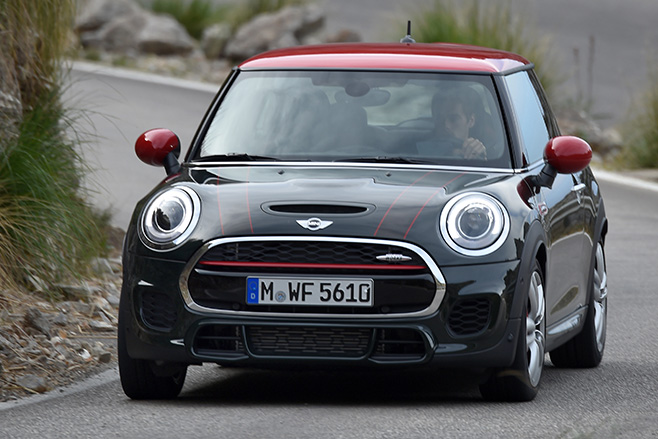 Engine upgrades include turbo tweaks for increased boost pressure, new pistons delivering a higher compression ratio, and a sports exhaust. A specifically developed Brembo braking system ups the ante on stopping power, and the aero package has been optimised with a revised front apron (larger cooling vents), side sill panels, rear apron and the addition of a roof spoiler.

The national launch was centred on no lesser venue than the Phillip Island race circuit; a track session followed by several hundred kilometres of twisting back roads on a circuitous route between the island and Melbourne.

First impressions are dominated by the 2.0-litre turbo’s strength and flexibility. It features BMW’s Valvetronic and VANOS variable (valve and cam) timing, and the turbo system is integrated in the manifold for shortest possible exhaust ducting. The result is a satisfyingly linear flow of grunt. Max torque is available from 1,250-4,800rpm, with peak power arriving at 5,200rpm, and the JCW pulls like a train right up to its 6,500rpm rev ceiling. 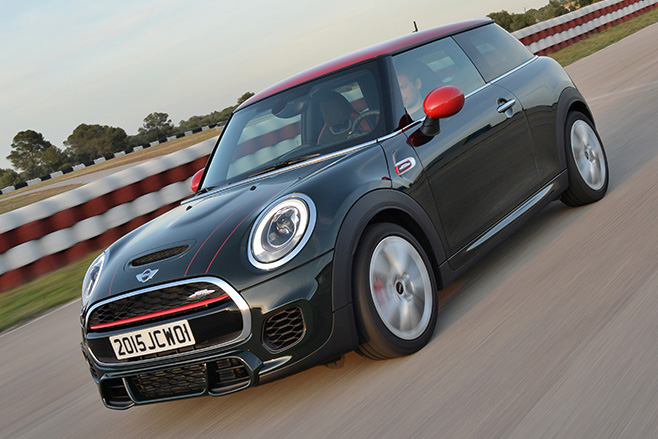 The bonus is a soundtrack reminiscent of an old-school Mustang 289ci V8; a hard-edged, hammering engine noise, accompanied by the exhaust’s snap, crackle and pop on the overrun.

The six-speed manual version ($47,400) was yet to arrive at the time of our review, so this spin was confined to the six-speed auto, and it’s good.

In manual mode, shifts through the wheel-mounted paddles are rapid, each gear holding to the limiter. On the way back down, a continued squeeze of the paddle sees the transmission flick through ratios to the lowest possible gear. A racy touch.

The standard Driving Modes function can be used to sharpen throttle and steering response, while the JCW’s Head Up Display (HUD) can be configured to include a rev counter as well as speed and gear, which works well in ‘enthusiastic’ sessions.

Standard sports front seats, with integrated head restraints look and feel great, with excellent lateral support. Braking, with meaty four-piston calipers up front is brilliant, even under the pressure of Phillip Island at full bore, and the sports steering wheel is nice and grippy. 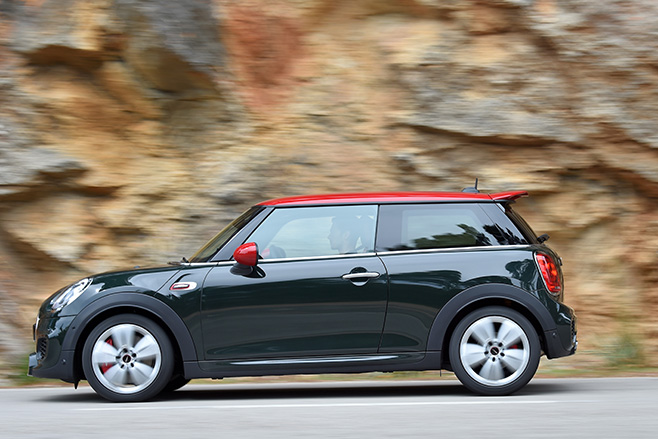 The standard Dynamic Damper Control (DDC) system allows for a quick switch between comfort and sport settings, and the difference is pronounced. Sport is perfect when you’re really on it, but far too firm for slower touring. Flick to comfort and the road is magically ironed out.

In terms of outright grip and cornering balance, the JCW is all class. Road feel from the Servotronic electrically-assisted steering is good (but not great), and after a quick but progressive turn-in the front end sticks resolutely. A big contributor here is the Performance Control system, subtly braking both inside wheels to apply torque vectoring type assistance.

Standard rubber is run-flat 205/40 on unique 18 inch rims, with brands on the batch of launch cars varying between Dunlop Sport Maxx RT and Pirelli P7. Overall, the car feels balanced, steady and predictable.

In comfort mode, the Mini is relaxed and refined. The engine’s torque makes it an easy drive through the urban grind, and the standard 410 Watt, 12-speaker Harman Kardon stereo cranks. 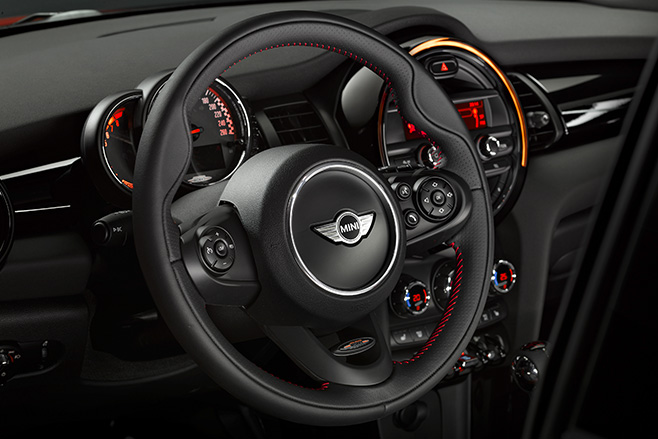 Although the current Mini is a step ahead of its predecessors in terms of function getting a better hearing over form, the interior will still feel overly fussy for some. There’s also the not insignificant matter of a $50k price tag.

The Golf is a heavy hitter dynamically, with more grunt, and it’s a second quicker to 100km/h. But it’s $5k dearer. We’d go the Mini JCW.

Click here to find out more about the Mini Cooper JCW.