Has the latest iteration of Mini's iconic hot hatch done enough to continue its rich legacy?

A compact high-performance hatch that takes its name from a 60s Mini racer and tuning specialist, and these days signifies the most focused, expensive as well as the fastest Mini Cooper. Earlier iterations of the JCW, as it’s known, were revered by enthusiasts for their brilliant blend of speed and driver involvement; this third generation aims to continue the legacy. 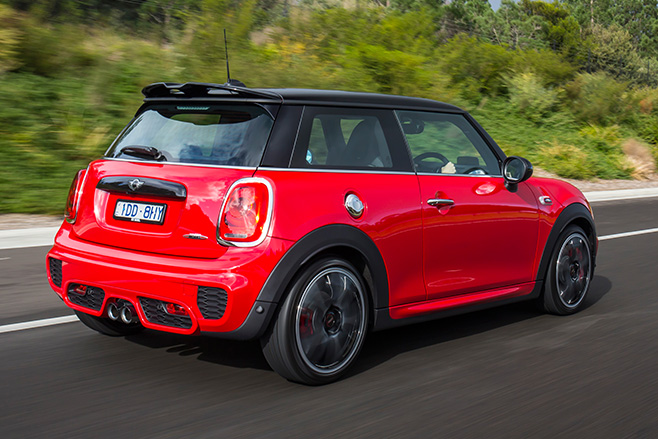 It’s built on an all-new platform used by parent company BMW to underpin front-drive models such as the 2 Series Active Tourer and the X1 compact SUV.

The aim was to add interior space without blowing out the exterior dimensions too far, and it mostly succeeds. The styling hasn’t made such a happy transition. The first New Mini was a skillful reinterpretation of the original – a larger, yet tightly drawn small car that cleverly acknowledged much of what made its 1960s forebear such a hit.

The third generation has lost much of that, instead becoming a slightly bloated, garish caricature. The nose juts awkwardly, the tail-lights bulge proud of the sheet metal like there’s a subcutaneous infection going on, the front end is a collision of angles and vents, not all of them functional. 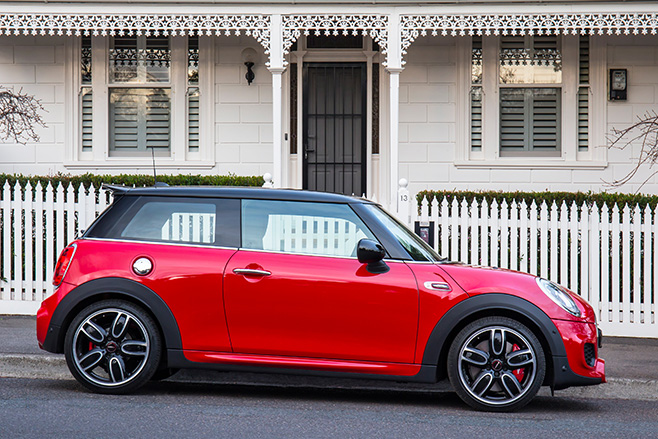 Inside, the cartoonification continues, with garish decals, fluro lighting options and dumbed-down infotainment messages aimed at the youth market. But how many young people who like this treatment actually have $50K-plus to drop on a top-of-the-range Mini?

It should be an absolute blast; an eager bundle of energy that fizzes and crackles and goads you into pushing the limits. So does it? Not entirely. The steering is direct to the point of hyperactivity, which can create the impression that the back of the car is struggling to keep up with the super-fast changes of direction from the front.

Compounding the problem, if you’ll excuse the pun, is Mini’s inexplicable choice of comfort/eco-biased tyres, rather than the high-performance rubber a car like this demands. The 18-inch Pirelli P7s are designed to reduce rolling resistance, with the result that the car can feel skatey on typical blue-metal (as opposed to hot-mix bitumen) Aussie roads. 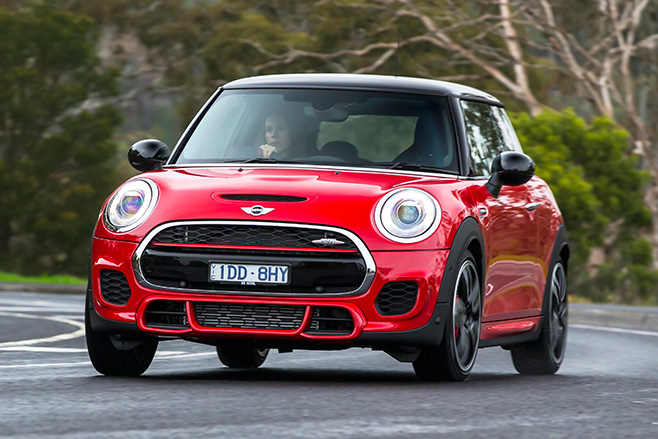 What you end up with is a car that doesn’t feel completely glued down in the middle of a corner, and begins to wag its tail if the driver has to back off the throttle or start applying the brakes before things are all in a straight line. Skilled operators may find this fun and interactive, but plenty of others will find it unnerving. There’s no question better tyres would transform the JCW driving experience and bring a level of dynamic cohesion that’s currently lacking.

At least the engine feels well sorted, which is no surprise, as it comes from parent company BMW. It makes a generous 170kW (up 29kW on the regular Cooper S) and is potent enough to hurl the Mini from 0-100km/h in a claimed 6.1 seconds and make it feel plenty quick enough when driven with gusto. The JCW is also offered with an automatic transmission, which seems a little at odds with its super-sporty intentions, but at least it can be operated by paddleshifters behind the steering wheel, giving the driver back a reasonable level of control.

There’s plenty of blurting and popping from the exhaust when you’re really on it, which goes some way to taking your mind of the grip and balance issues. 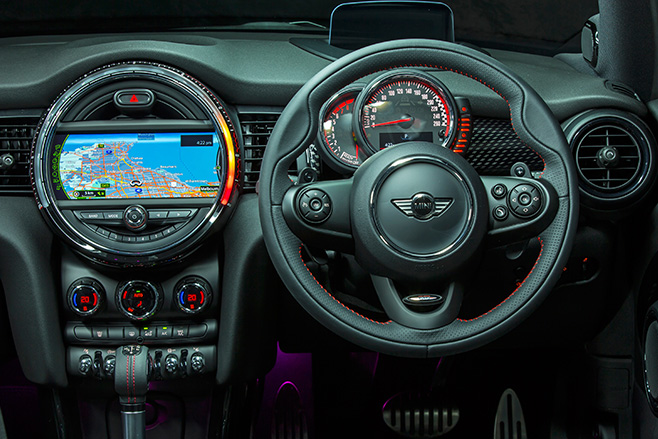 Even overlooking the chintzy treatment, there are problems from the driver’s seat. The dash is abnormally deep, moving the driver back from the windscreen and taking away any sense of intimacy and connection. The rear seat only offers enough space for very small kids, while the luggage compartment will struggle to take a weekly grocery shop for a typical family, unless you fold down the rear-seat backrests. Otherwise it’s reasonably civilised, with a Comfort mode to soften the suspension, light, direct steering, and a powertrain that is happy to lug taller gears and cruise quietly.

Oh dear – another area to weaken the case for a JCW. The automatic version we tested sells for $49,950; the manual is $2550 less. The regular Cooper S hatch (minus the JCW) is $39,300. Yes, its engine, among other things, is less muscular, making 141kW/280Nm, but given the $10K more expensive JCW doesn’t having you gagging to thrash every last bit of performance from it, it’s not hard to convince yourself that the regular Cooper S fills the role more roundly.