While it’s not quite true to say that the Triton is a ground-up, 100 per cent new vehicle, it’s pretty close. More than 80 per cent of the body and 40 per cent of the chassis is completely new, while the leftover bits – including the suspension and steering – have been completely overhauled.

And did you know that more than 495,000 Tritons have been sold in Australia? 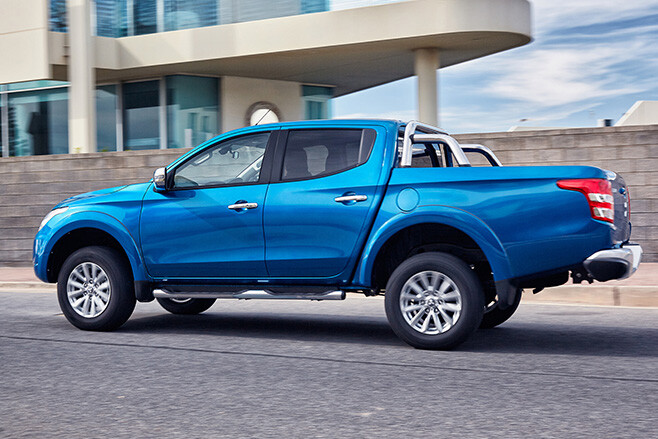 No, I didn't know that. What else is new?

Mitsubishi is pretty proud of the 2.4-litre MIVEC-equipped four-pot turbo diesel. It is, it says, the best of the best from a company that knows its engines. It loses out on capacity to, say, a Toyota Hilux or a Ford Ranger, but 133kW and - more crucially - 430Nm of torque is handy.

It's also scored a raft of safety updates to bring it up to an ANCAP five-star car - that was as much about selling into the mining sector as anything else, though.

There's also a revised six-speed manual and a five-speed auto that's been poached from the Pajero. While everyone has dreams of touring the top end in their holidays, the reality is that a dual-cab ute might haul a couple of toolboxes around during the week, and a few motorbikes or kid's toys on the weekend - so it has to behave on road.

It has an easy-to-live-with personality, a settled, dynamic ride quality even when unladen, and truly low levels of noise intrusion from either the engine or the tyres.

The reborn Triton is one of the most pleasant dual-cab utes we've ever driven on sealed roads. Quiet, refined, good body control, great visibility... the Triton wins the battle of suburbia hands down against the current Toyota HiLux, Mazda BT-50, Ford Ranger (themselves very good in that department) and Nissan Navara.

Wow. So obviously I'm not going to go fast in it, but what about off road?

The Triton lacks a few of the bells and whistles of more modern 4x4s; there's no hill descent control or rock crawling functionality, for example, just a cabin-switchable high- and low-range 4x4 set up.

We tested it over the deep-ish sands and rutted dirt tracks of Fraser Island, and the Triton handled it all with aplomb, with plenty of torque down low where you need it most, predictable behaviour under your fingertips and a comfortable cabin in which to spend time.

It can also tow 3100kg while carrying up to 640kg of payload (including passengers). Anything wrong with it?

There’s no doubt that 4x4 ute customers are still on the receiving end of a commercial vehicle mindset, with very few extra mod cons included in a reasonably high ticket price. There’s but a single USB port, for example, no rear vents, satellite navigation and smart keys are reserved for the range-topping Exceed.

And those front-end looks are definitely a take it or leave it proposition.

What am I paying for it? Worth it?

The range-topping Exceed is $47,990, while the next one down, the GLS, is $43,490. The 4x4 dual cab game is set to change massively this year, with new entrants from Nissan and Toyota as well as facelifted models from Ford and Volkswagen. The market is running hot, so you may be able to negotiate a deal. Mitsubishi is also running the previous model out next to the new one - there's definitely good buying in there.

So, this or a new Navara?

On balance, the Triton is the better rig for a lifestyle that leans towards suburbia. It's lighter, more agile and more involving than the new Navara - or any other dual-cab ute out there, for that matter.