The hottest Cayman gives big brother 911 a fair fight. The GT4 is a proper Porsche Motorsport car. Get one... if you can.

It’s the hottest incarnation of the Cayman, fast and laser-focussed enough to give big brother 911 a fair fight around almost any track in the world. Many of us had assumed that was what had held Porsche back from doing the hot Cayman sooner: the little one couldn’t be seen to be treading on the 911’s toes. Andreas Preuninger, boss of Porsche’s GT cars division, is emphatic on this point: it’s just not true.

The reason Porsche hasn’t built a GT Cayman before has nothing to do with potential overlap or concern about it being better than a 911 GT3, but a whole lot to do with the limited manpower and resources of the Porsche Motorsport squad. “But let me tell you we have wanted to do this car for a long time, and now I think the little brother should be allowed to show what he can do.” 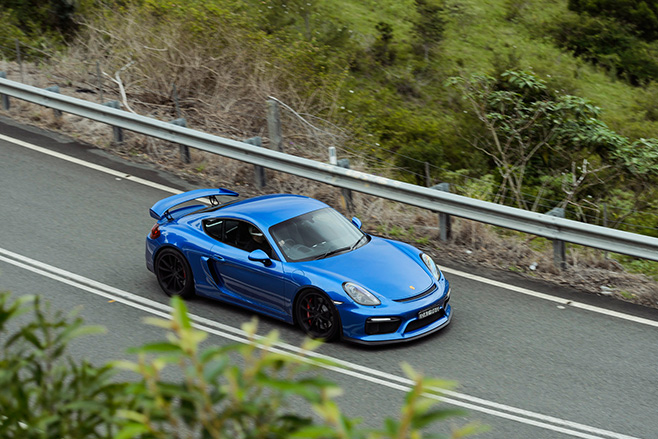 It’s taken just 22 months from pitch to the board of directors to arrival on sale – the fastest-ever development of a GT car, which probably means they had a good idea of what they were going to do before they got the go-ahead. The 3.8-litre flat-six is borrowed from the Carrera S, but turned through 180 degrees so the motor sits directly behind the seats with the gearbox trailing behind.

There are a few tweaks to help with fitting and breathing, but power and torque remain the same at 283kW and 420Nm. Despite the extra capacity over the 3.4-litre Caymans, this engine is only about 7kg heavier, contributing to an all-up weight of 1,340kg, the same as the Cayman GTS. Not bad at all, considering the extra strengthening that’s gone in. And yes, your only choice is a six-speed manual gearbox. No PDK on the options list here.

Plenty of other stuff is, though. Like the Club Sport pack (half cage, harness, fire extinguisher), one-piece carbon seats from the 918 Spyder or a nifty lap-timing app for your phone. But the addenda don’t define the product – it’s what you get as standard which does that. 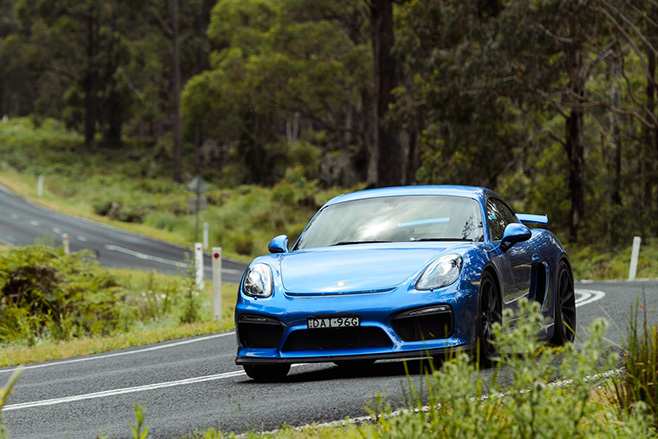 The front suspension is largely carried over straight from the 911 GT3, while at the back the standard Cayman set-up has been reinforced, plus there’s PASM active damping and, given a trolley jack and half an hour, a wide range of suspension-adjustment options. The front and rear anti-roll bars have soft, medium and hard positions, and you can fiddle with the spring/damper units and even the aero. Remove a couple of trim pieces that cover the front-axle diffuser channels, tilt the rear wing another three degrees to balance it out, and there’s your extra downforce.

The GT4 rides 30mm lower than standard, front track width is up 13mm, and with its new front bumper, 20-inch GT3-alike wheels, various cooling slats and the rear wing sat up on those aluminium supports, it looks the absolute business.

The message is clear: this is a motorsport division car, every bit as focused as big brother GT3. 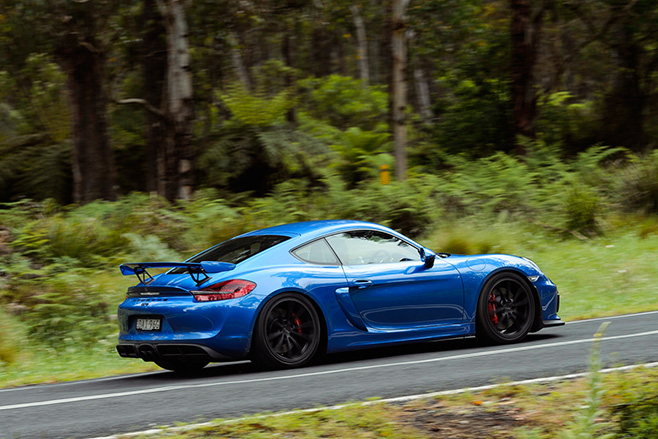 You’re aware of the GT4’s serious credentials from the moment you set off, having dropped a long way down to the 918 seat, and discovered that its padding has been adjusted so that you sit deeper into it and seem to be a little less upright. Still no chance of slouching, but you won’t want to once you get a grip on the new, smaller, slender-rimmed wheel and stubby little gear lever – 20mm shorter than in a standard Cayman.

The clutch is weighty, but first engages smoothly and you realise the positioning of the pedals, the ergonomics and the layout of the switchgear is all so intuitive. You’re low to the ground, and the movements are ultra-positive. There’s no slack in the suspension at all – it’s all control, control, control. The damping is abrupt, those big tyres (245/35 front and 295/30 rear) roar, it’s not fidgety at all, but you can’t really relax, can’t fiddle with your phone. Or the satnav, or the stereo, because it’s not there.  Unless you spec it.

The front end is rock-solid. There is always more grip. Always. I caught myself out on a bend that tightened dramatically and dropped away. I knew the Cayman couldn’t cope with it, couldn’t possibly grip with the panicky extra steering demands I’d just placed on it without succumbing to understeer. It did, though. And with an air of authority, and that gave me total confidence in what it was capable of. I felt the forces build through the steering and chassis, knew which bits were having to work hardest, what I should do next. It allows you to think ahead of the car, to know what it’ll do in any situation before you get to it. 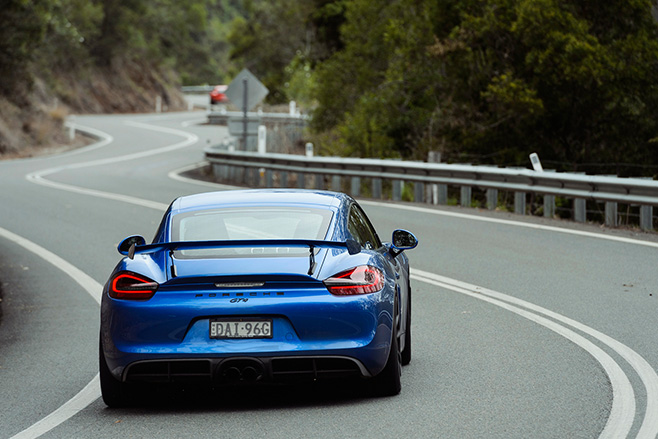 It’s both incredibly agile and beautifully balanced, the centred weight distribution allowing you to take liberties with it that you can’t with the 911 GT3. Because you have to give that car more respect, work around its foibles, ultimately the GT4 isn’t quite as beguiling and richly rewarding as the GT3. But it’s damn close. And $100,000 cheaper, which looks something of a bargain.

What the GT4 lacks is the GT3’s engine pedigree. You can tell the Carrera S’s 3.8 isn’t a pure-bred Porsche Motorsport unit. It doesn’t operate with the same frenzy, snarl and snap, and is all done at 7,800rpm, rather than 9,000rpm. Deficiencies are masked by the noise – it’s loud and angry – and the strong mid-range pull which, when the Variocam system gives it both barrels above 5,500rpm, develops into GT3-threatening pace.

The gearshift is a honey, too. Same basic transmission as a Cayman GTS, but the shorter lever means punchy shifts. You just jab the lever around the gate, and if you have the Sport button pressed, it does the rev-matching for you. In fact, that is the only thing the Sport button does. 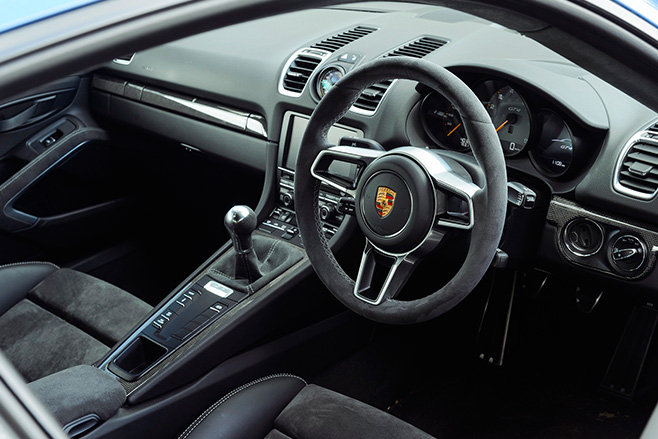 What about driving it around town?

It’ll sit happily enough on a motorway, a more willing companion than say, a Lotus Exige or Alfa 4C, but less accommodating than the current 911 GT3. I remember driving that car and thinking I could happily live with it every day. The Cayman GT4 is less forgiving than the 911 GT3, but if you’re buying one and are worried about motorway manners, boy, are you buying it for the wrong reasons. Have a Cayman GTS, have a base one – they’ll do a much more acceptable, pleasurable job for you on the daily commute.

One minor drawback to the gearbox – those Cayman GTS ratios are too long for the GT4. Porsche explains it away by saying that it doesn’t want people to have to change up during overtaking opportunities, but more sprint-oriented gearing would suit the car better. Don’t bother firming up the standard PASM dampers, either – the Nürburgring lap time was achieved with them in Normal.

Incidentally, it deals with the Green Hell in 7:40. That’s only eight seconds slower than the PDK-equipped GT3.

What’s it cost, and is it worth the coin?

At $190,300, it’s not cheap – it’s $60k more than the Cayman GTS, and not too far from double the price of an entry-level Cayman. On the other hand, if you’re looking for a serious performance Porsche, it’s abot $100k less than a 911 GT3 – and it gives you the full Porsche GT experience for a lot less money.

Click here to find out more about the Porsche Cayman GT4. 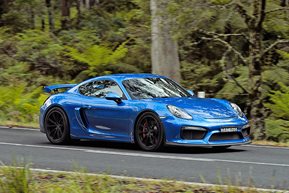