Škoda has been chipping away at the local car market since its owner VW Group introduced the brand here in 2007. The mid-size Octavia is the first model to go through a range re-fresh, and this is the third and final variant to arrive, following the standard car and RS sports sedan.

As the name implies, the Scout 4x4 is a high-riding, all-wheel drive, SUV version of the Octavia wagon, powered by a choice of petrol turbo or (two) turbo diesel four cylinder engines.

The previous Octavia was out of step technically, riding on the same chassis as the VW Golf Mk5, but this third-generation car sits on the same (MQB) platform as the current Golf Mk7.

When asked about their car, Škoda owners tend fire up into an evangelical tirade about its all-around brilliance in terms of quality, performance, value, etc, etc, etc. And on the basis of this outdoorsy wagon, we think they’re on to something. Centrepiece of the all-wheel drivetrain is the latest fifth generation Haldex electronic coupling, allowing up to 95 per cent of drive to be directed to the rear axle, working in concert with an electronic diff lock to manage distribution of torque to individual wheels.

Ground clearance is 31mm higher than the standard Octavia (at 171mm), macho plastic mouldings adorn the wheel arches and lower body, as well as the key underbody components including the brakes and fuel lines, and 17-inch alloy rims are standard.

The Scout offers a similar proposition to Subaru’s Outback; plenty of off-highway ability, combined with comfort and driving dynamics closer to a conventional sedan when you’re on it.

Although most Aussie drivers in 2015 will rarely see a dirt road, let alone drive on one, the Octavia Scout’s launch program took in a bunch of it, courtesy of a loop through some of Tasmania’s great driving roads north west of Hobart.

We scored seat time in the 135 diesel and 132 petrol, and each delivered an impressive performance.

The top-spec diesel is seriously grunty with maximum torque available from just 1,750rpm all the way up to 3,250. Strong acceleration, followed by plenty of mid-range pulling power makes this version a highway star, with heaps in reserve for rapid overtaking and open road carving.

Although the 132 petrol’s peak torque number is 100Nm down on the diesel, it’s available from even lower revs (1,350rpm), and doesn’t start to taper off until 4,500rpm. Combine that with maximum power kicking in at 4,500 and remaining on tap until 6,200, and you have an even more lively and responsive package. Claimed 0-100km/h for the base diesel is 9.1secs, with the petrol and premium diesel both locking in at 7.8.

Engine noise is subdued in both versions at cruising speeds, although the petrol starts to emit a fruity rasp as revs rise. Steering feel is good rather than brilliant, but its gearing is just right for relaxed back-road cruising, while ride comfort and overall dynamic composure is excellent.

Dipping and twisting dirt roads did little to upset either version, the car remaining quiet and grippy across sealed and broken surfaces. 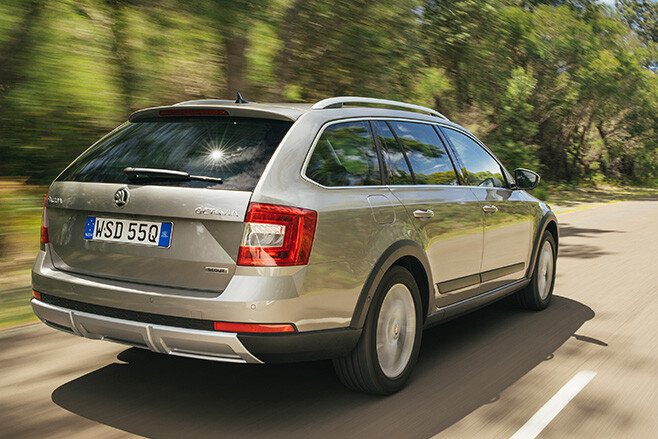 The interior conforms to the VW Group design feel, with key elements virtually interchangeable with VW siblings in particular. That’s not to say it’s bad. The treatment is minimalist, with subtle coordination of materials and finishes contributing to a relatively conservative feel. In typical Teutonic fashion the front seats feel firm initially, but provide twinge-free support over the long haul.

Even the base car features a 5.8 inch touchscreen for control of infotainment functions including the eight speaker audio, with the higher spec cars stepping up to an eight inch screen and extra features like sat-nav and Apple connectivity.

There’s more than adequate room in the back for full-size adults and plenty of cargo space, with 588 litres available, even with the 60/40 split-fold rear seats upright. There are also four folding hooks for shopping bags, two lights and a 12V socket back there; plus a nifty double-sided mat in the boot with carpet on one side and a water-repellent membrane on the other, to suit your load type’s mud and H2O quotient.

The DSG dual clutch throws a hissy fit and briefly dulls engine response if you happen to brush the brake pedal with your left foot while squeezing the throttle with your right. Annoying. 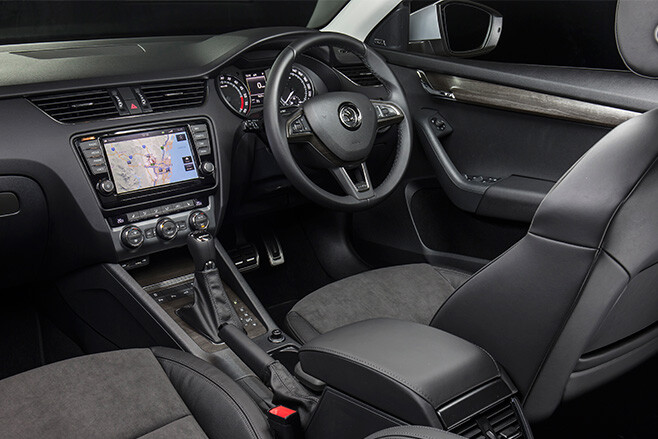 There’s also an optional ($4,400) ‘Premium Pack’ for the base car to lift its spec closer to the upper variants, and a ($3,900) ‘Tech Pack’ available across the board, including adaptive bi-xenon headlights, park assist, adaptive cruise, lane assist, Canton 10-speaker sound, and driving mode selection.

Škoda has also announced a guaranteed future value program called ‘Škoda Choice’, where owners can dial in an agreed term (up to four years), km per year, and a total payout figure to stabilise residual value (an Achilles Heel factor for a brand relatively fresh to this market).

Would you take the Škoda Octavia Scout 4x4 or Subaru Outback?

Both are excellent packages, but like-for-like the Subaru Outback has the edge on value for money and space. A close win to the Subie.

Click here to find out more about the Skoda Octavia Scout 4x4.