Volvo's second-gen seven-seater steps up. It’s the company’s first shot at the luxury SUV big leagues and it’s a good one.

In launching its second generation XC90, Volvo isn’t skimping on big, sweeping statements. According to the Swedish chefs from Gothenburg , the seven-seat SUV represents “a new beginning” and “defines the company’s future direction.” Which is code for Ford sold us to Geely five years ago, and we’re free to do what we want without wading through masses of red tape in Detroit.

In fact, Volvo claims it will turn over its entire line-up in the next four years, and believes all that fresh metal, marketed under a new ‘Made by Sweden’ positioning, will finally make it a credible contender in the upper-luxury ranks. It cost $11B over three years, and Volvo’s calling its ambition out loud and proud, saying the XC90 has been designed to “lead the market” in terms of comfort, luxury, and user interaction. 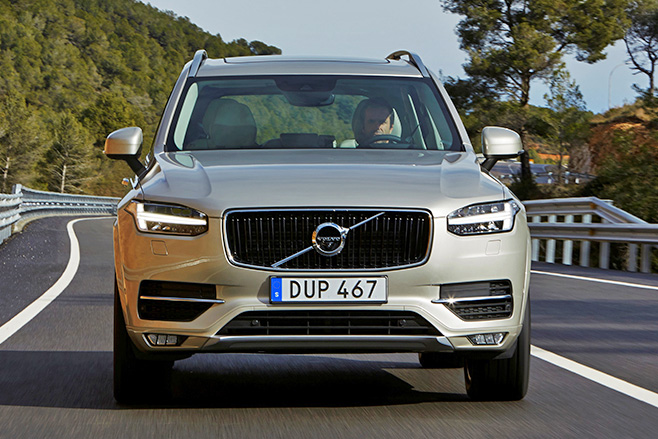 Although overall proportions are similar to the car it replaces the second-gen XC90 sits on the brand’s new modular SPA (Scalable Product Architecture) chassis, which is likely to underpin many of its upcoming siblings due by 2019.

Initially there’s a choice of two engines in the Volvo XC90, a 165kW/470Nm twin-turbo diesel four (D5), and a 235kW/400Nm twin-charged petrol four (T6). The latter uses a supercharger to enhance torque at lower engine speeds, with a turbo taking over to boost the top end. Both are matched with an eight-speed auto, produced by Aisin-Warner to Volvo’s in-house design.

Six months down the track, Volvo will add a plug-in hybrid version of the petrol unit (T8) which tips in another 65kW/240Nm of electric grunt for a family fast 5.6 second 0-100km/h time.

There are three model grades – Momentum, Inscription, and R-Design, the latter available from the fourth quarter of this year.

Beside the platform and drivetrain there are several key tech features that stand the new XC90 apart.

Next, the ‘Auto brake at intersection’ system automatically brakes the car if the driver turns in front of an oncoming car.

Plus, the tablet-style ‘Sensus’ infotainment interface uses an infrared screen (so you can wear gloves and still tap or swipe) for everything from nav and audio, to phone and on-board vehicle functions. In certain sections icons can also be positioned on the ‘desktop’ in line with user preference. 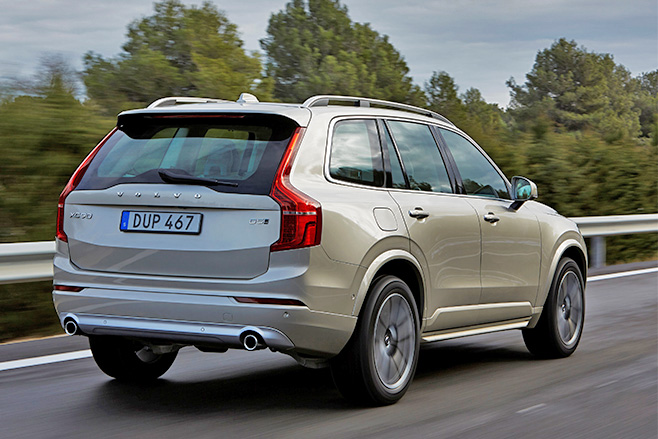 The XC90’s local launch in and around Canberra took in a mix of freeway, coarse-chip b-roads, as well as the odd dirt section, and the first few kays in a Momentum T6 had us double-checking we weren’t in a diesel, because at idle and slow speeds the twin-charged four sounds comparatively coarse. But get it up into the mid-range and the new engine is spirited and the eight-speed auto smooth. The transition from supercharger to turbo is imperceptible, and maximum torque is available from 2,200rpm all the way up to 5,400.

Road feel from the electrically-assisted, variable power steering is OK, braking is strong, and the design and development effort that’s gone into the front seats has paid off with great long-distance comfort combined with excellent (adjustable) lateral support.

Swapping to a D5 Inscription, the twin-snail diesel chips in with an extra 70Nm of torque, delivered across a relatively narrow peak brand from 1,750-2,500rpm, which is perfect for towing, (max weight 2,250kg).

The step up to 20-inch rims, wearing 275/45 tyres, doesn’t harm the ride/handling balance, and highway cruising is relaxed, with plenty in reserve for rapid overtaking. Optional 21 and 22-inch wheels are available.

The interior design is classic Scandinavian minimalism, with the Sensus system incorporating most of the functions normally handled by dash and console switchgear. The base Momentum we drove featured a dark colour (leather) upholstery and interior trim, and while the standard of fit and finish is high, the overall impression is flat; lacking a sense of occasion. Our advice would be to stump up an extra $700 for birch or walnut wood trim elements. They make a big difference, as did lighter Nappa leather upholstery in the Inscription.

The Sensus interface is super easy to use, the 12.3-inch digital driver instrument display is clear and easy to configure, the widely adjustable second row seats incorporate Volvo’s signature built-in child booster cushion in the centre position, and the third row is tailor-made for kids, with more than adequate space for grown-ups on short to medium trips. Plus folding seats for a multitude of load positions is stress-free. 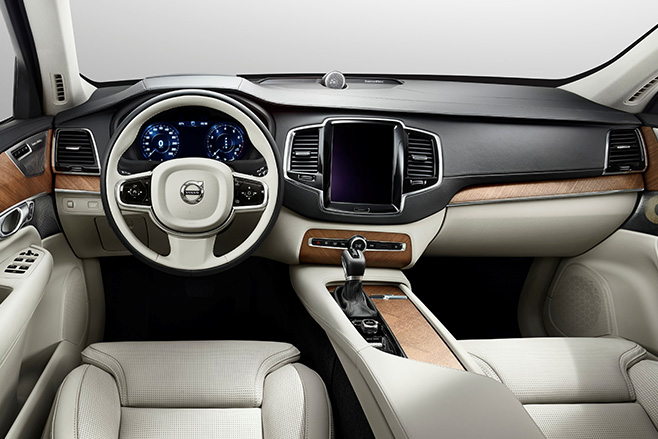 As mentioned, the petrol engine sounds un-prestige at low revs, the steering could be more feel-some, and the dark interiors feel a bit, well, dark.

On the face of it, that’s a roughly $20k increase from the out-going model across the board, but Volvo’s confident the new drivetrains, innovative tech, and increased spec more than justifies its pricing strategy.

Then the R-Design adds, ‘Drive Mode’ adjustable power steering, Charcoal headlining, sports seats, and interior carbon trim elements. And with the T8 drivetrain the R-Design cops an Orrefors crystal gear lever and panoramic sunroof (a $2,950 option on other models). Lots of cash, but lots of fruit.

Would you take the Volvo XC90 Momentum T6 or BMW X5 xDrive35i?

Click here to find out more about the Volvo XC90.