Despite the RS3 being some $28K pricier than the RS, this pair go toe-to-toe for key features and equipment. Both feature dual-zone climate, cruise, smart-key entry and start, auto headlights and wipers, LED DRLs, tyre pressure monitors and multimedia system with digital radio, Bluetooth connectivity, reversing camera and satellite navigation.

Typically cool mood-lit Audi cabin theme is evident, with some RS-style sportification. It’s a class act. More generously padded front seats are comfier than the Ford’s while offering lateral support up to its prodigious cornering ability. The RS3 also has a slightly bigger boot – 280 litres plays 260 – though neither is especially capacious for their size.

Five-pot arrangement gives the RS3 an aural edge. It’s more tuneful and wilder-sounding than the RS; it sounds like half a Huracan. At 2.5 litres, it also has capacity on its side, and an extra 13kW and 35Nm driving through the seamless seven-speed dual-clutch transmission makes it a bit snarlier in a straight line than the six-speed manual Ford. 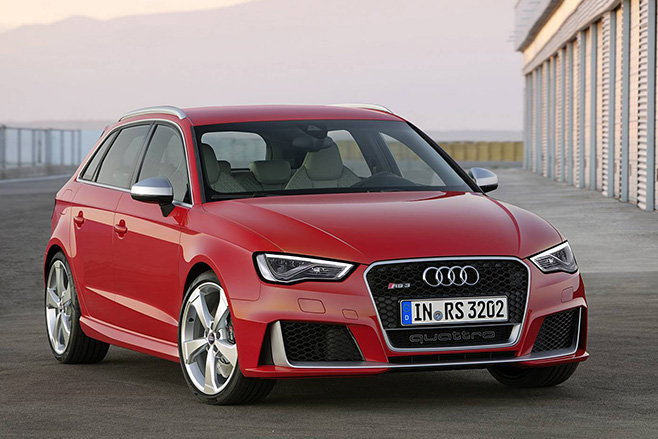 The Audi manages a better splitting of its personalities – rapid premium compact and road-rocket – at the expense of ultimate engagement and ability. But for those times you’re not back-road strapping, the RS3 makes noticeably smoother, quieter and calmer transport, and you don’t have to deal with operating a 465Nm-capable clutch.

The ability to send 100 percent of torque to the rear tyres does not make the RS3 behave like a rear-drive at the limit; it favours mild understeer and resists wild attitudes. The RS3 needs Audi’s Sport rear diff (an S4 option that can send 100 percent of torque to either rear wheel) and greater feel from the flat-bottomed wheel to be a true great.

Given the price gulf, we’ll forgive the Ford for not having some of the Audi’s niceties. It misses out on driver’s knee and front side airbags – the latter because of its track-oriented Recaro seats that also rule out powered lumbar support and seat heaters. They’re standard in the Audi, though you pay $4500 for optional bucket seats in that.

The tangible result of Ford containing the RS to $51K is its considerably less-special cabin. However, given the RS’s performance, erm, focus, we’re happy with a pair of uncompromising Recaros, liberal blue stitching and a nicely sculpted and trimmed wheel. Pity the front seats are not height-adjustable – and they’re set too high.

They’re both in the hyper-hatch league, but the RS isn’t quite as quick. The 2.3-litre Ford has masses of low-down torque and an urgent top-end. It’s especially responsive in Race mode, where it hits hard, backed by an induction, exhaust and cracking soundtrack on shifts. Slightly lower outputs translate to lower fuel use at an official 7.7L/100km. 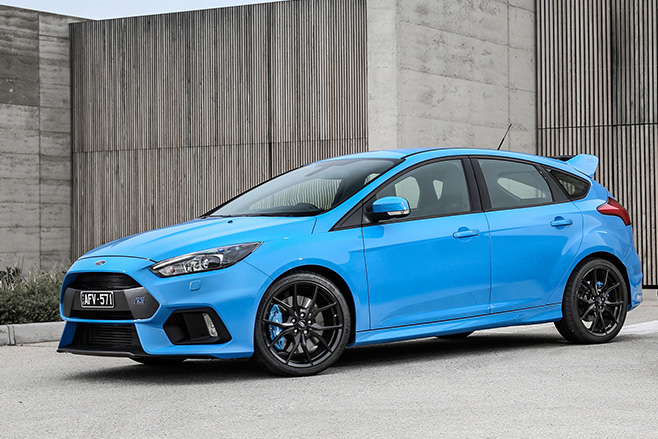 The RS’s track tendency comes across in its ride as much as heightened dynamic qualities. It’s firmly sprung and damped, and the thinly padded Recaros magnify the sensation. The ride is well judged in Normal and Sport modes – only just – but the hardcore Race is over-the-top. It’s too harsh for the street, but that’s why it’s called Race.

This is where the Ford hurts the Audi, and for $28K less! Purists will love the RS, whereas the RS3 leaves something on the dynamic shelf. For all its rival’s point-and-shoot pace, the Ford has steering connection and feel and chassis adjustability that would be entertaining on their own, let alone with a desperately eager 257kW underfoot.

Before the Focus RS, the circa-$80K hyper-hatch – championed by the Mercedes A45 and Audi RS3 – presented a compelling case for spending large for speed in a concentrate. Now the Ford does much of what its pricey premium rivals do for fewer dollars – some 35 percent fewer, or $28,910 less than the Audi. On the other hand, cabin class, speed and soundtrack are the justification for spending more for the RS3. As ever, it will come down to your preferences. Bothered by the Ford’s four-star safety rating? You’ll choose the Audi. You’re a purist who puts steering and dynamic involvement first? It’ll be the Ford, then. Simply looking for the biggest bang for your buck?

Our winner is the Focus RS.

This article was originally published in Wheels Summer 2016.