The Honda Civic is a household name in Australia. Civic hatchbacks and sedans have been faithful family members for many over the years, and the small car that could is now in its 10th generation.

This new model is a complete redesign with a new body, new interior, new engine, new infotainment and new safety tech. So let’s get to know it.

The last few iterations of the Civic saw Honda take its eyes off the road a bit. It’s only now that the Japanese brand has been able to spend money on redeveloping the Civic formula into something once again worthy of a home in Aussie driveways.

The new sedan has arrived first, with the hatch expected in early 2017, and it’s a much better car than before in just about every conceivable way. It’s bigger and more spacious inside, it’s quieter and more comfortable, its new turbo engine is excellent and its talented chassis is lighter, better to drive and safer.

You may notice the Civic has a strong European influence about it, which is definitely not accidental. Honda ambitiously set the Volkswagen Golf and Audi A3 as the targets for the Civic’s ride, handling and refinement, and its engineers have done a fine job in developing a smooth and solid-feeling car.

All models except the base VTi have front and rear parking sensors, and only the top-spec VTi-LX gets a the full suite of lane departure warnings, radar cruise and pre-collision warnings. It also gets heated leather seats as standard.

There are five Civic sedan models to choose from. The two entry-level models are Civic VTi and VTi-S. Both use a 104kW/174Nm 1.8-litre four-cylinder engine that’s carried over from the old car. The other three are VTi-L, RS and VTi-LX. All of these feature a 127kW/220Nm 1.5-litre four cylinder turbo engine which is brand new.

We’d have the Civic VTi-L. It comes with a good level of included kit and the new turbo engine, which is more powerful and uses just 6.0L of fuel per 100km. It misses out on built-in satellite navigation, but having Apple and Android integration means your smartphone can handle that job.

If a sportier appearance is more your style then the Civic RS is for you, and if you really must have all the gadgets and the luxury of leather seats then the VTi-LX is the way to go. The CVT gearbox in the Civic is the only transmission available and stands out as one of the better CVTs on the market.

Honda has really impressed us with its refreshed small sedan and we expect the same from the upcoming hatch. It’s an accomplished package that should reinstate the Civic on people’s shopping lists and win back those who have been long-time fans of the marque.

TESLA has nothing on the Honda Civic as far as being a disruptor is concerned. Back when Elon Musk was still in elementary school, Honda’s original 1972 Civic brazenly broke ranks with major carmakers by exceeding proposed early emissions regs that others claimed were impossibly tough, with smooth, efficient, clean-revving ease. The rest begrudgingly fell into line and the green car movement was born. Elon owes a debt.

We all do. Although BMC introduced the template for modern front-drive small cars in 1959 with the brilliant but flawed Mini, the Civic democratised it by making everything work properly. Subsequent generations added innovations such as multi-valve engines and variable valve timing, double-wishbone suspension and eco-enhancing engineering, plus revered CRX and Integra coupe offshoots. 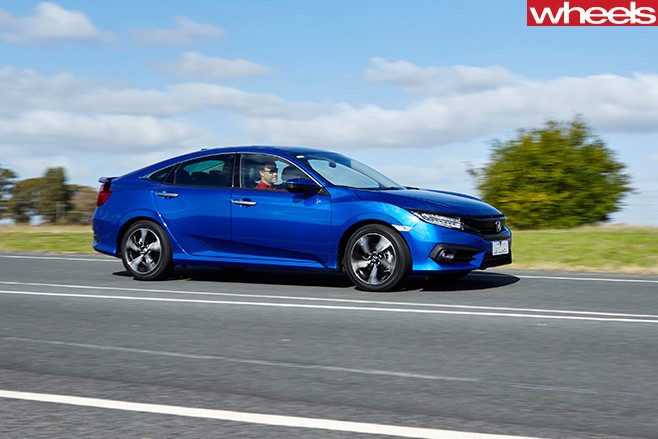 Until the new millennium, the Honda Civic was truly Japan’s Volkswagen Golf. Then the Americanisation of Honda happened.

Cost-cutting made the last three Civic iterations interminably dull, and in the sedan’s case, downright depressing. The crisis culminated at the Tokyo motor show in 2011, when CEO Takanobu Ito made an astonishing apology for the outgoing Civic’s inadequacies. Last year, VW sold five times more Golfs and Mazda nine times more 3s in Australia. The disruptor was in disarray.

Such history is vital in understanding why this 10th-generation car carries Honda’s reputation on its fussy flanks, even if little has changed conceptually.

There are two petrol engine options – a carryover 1.8-litre single-cam unit in the entry VTi and VTi-S, and (at last) a box-fresh 1.5-litre turbo in the mid-spec VTi-L, sporty RS, and tech-heavy VTi-LX – each controversially tied solely to a CVT auto. While all mirror Mazda’s positioning strategy, the 10th-gen Civic’s creators set their horizons well beyond Hiroshima. 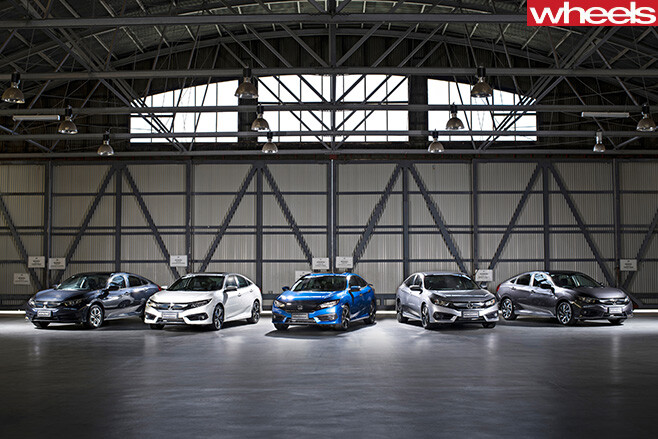 Engineered in Japan, with significant American and European – as well as some Australian – input in design and packaging, development work kicked off immediately after that Tokyo show disaster. As far as automotive atonement goes, none are more sincere than all-new everything – body, cabin, platform, powertrains (except for the 1.8), multimedia and safety systems.

No doubt styled to appeal to Americans – perhaps even overstyled – one could argue that the sedan’s 22 percent better aero-cheating fatback (sorry, fastback) silhouette pays lip service to the two-box ’72 original. Pleasingly thin A-pillars that aid vision and a bonnet line that’s 35mm lower hark back to Honda’s golden years.

Honda even hopes that the longer, wider and lower Thai-built newcomer will attract former Accord Euro buyers. Wishful thinking? Maybe, but that parallel certainly seems appropriate when you sit inside what is almost a Toyota Camry-sized cabin. 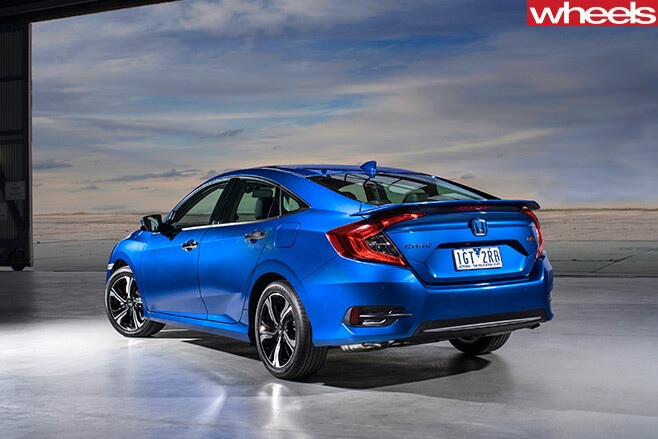 Riding on a 30mm longer wheelbase, 45mm greater in girth and with a 20mm-lower seating position, the Civic interior feels vast, with more space for knees and feet. And its boot has ballooned to a Commodore-scalping 519 litres.

Foibles include side vision when reversing, fiddly audio volume control and a lack of face-level air vents in the back seat, but this is nit-picking considering how on-script the all-new Civic is.

The Germanic influence isn’t just inside, either. At the local launch, Civic program chief Tadashi Inazu revealed that the Golf and Audi A3 were the sole development benchmarks for ride, handling, refinement and noise suppression.

To that end, the body-in-white is 25 percent torsionally stiffer, thanks to high-tensile steels and advances in body-joining and welding techniques, yet it’s also 25 percent lighter. Backing this up in the name of quietness are new inner-frame structures, underbody covers, smarter insulation, one-piece carpet boot liner, triple door seals and thicker glazing. 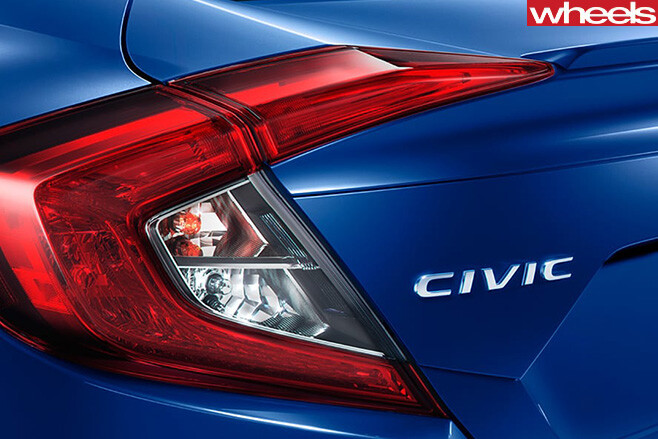 One of the many upshots is a quieter and comfier ride, lushly so over rutted and gravel surfaces. That’s something nobody saw coming. Though droney at times over coarser-chip bitumen, gone finally is Civic’s hollow tinniness. This right here is the crux of Honda’s achievement. Is there a more grown-up small sedan for the money?

Progressively weighted yet engagingly responsive steering is another series first. Electric, of course, but with a variable gear ratio offering an extremely pleasing 2.2 turns lock-to-lock rather than 3.1, it equates to deft, involving and confident handling control, especially at high speeds.

Upping the ante to 215/55R17 rubber in the RS, the chassis gels in a similar, delightfully fluent and fun way as we’ve enjoyed in recent Peugeots and Renaults.

Prototype tuning in rural Australia has resulted in improved stability and traction tuning. If for nothing else, the chassis is worth the Civic’s price of entry. The Type R hatch due in 2018 should be a blinder. As for the powertrains, the carryover 1.8-litre single-cam four is your typical unobtrusive, sweet-revving Honda i-VTEC unit, providing stronger than expected mid-range urge as compensation for a lower-down torque deficit.

What might be unforeseen is what a fine fit the new-gen CVT is, utilising a torque-converter and two variable-width pulleys To provide natural auto-trans responses. Gone is the slipping and flaring associated with CVTs, unless you provoke it.

Honda expects half of Civic sedan sales will be the new 1.5 turbo, and here the game gets more interesting. While the heavier-duty CVT application is equally laudable, aided by a deep well of low-down torque uncharacteristic of previous Civics, it absolutely cries out for a slick six-speed manual ’box, which – shockingly – isn’t coming. For the 5-10 percent of buyers who’d opt for a manual, this is deliberate and detestable discrimination.

Step-off acceleration is eager and largely lag-free in a way no dual-clutch alternative matches, and performance builds rapidly and deceptively thanks to the rock-solid chassis and hushed cabin that conspire to mask your actual speed. Spry point-to-point, you’d call the turbo Civic warm-hatch nimble. Perhaps the only false note is that Honda’s zingy VTEC sweetness gives way to an ever-so-slight gruffness.

It may not be the disruptor of old, but this 10th generation is a skilful amalgam of the C-segment leaders’ attributes – poise, performance, refinement, quality and packaging cleverness – propelling the series from latter-day also-ran to potential front-runner. Civic is back, folks.

A dash of class

The previous Civic’s cluttered and confused double-decker dash has been banished for a more conventional and coherent layout. Now even the base VTi offers a profound step up in quality and presentation. Removing the conventional handbrake for an electric item liberates space, too.

Honda Australia was prepared to continue with ‘Sport’ rather than ‘RS’ for the Civic 1.5 turbo, as those letters are famous for signalling ultimate performance in models such as the Ford Focus RS and Porsche 911 GT3 RS. But the locals were forced to fall in line with global naming policy, which sees RS sit below Si and Type R in the Honda hierarchy.

Key chassis advancements include the implementation of subframes for the redesigned MacPherson strut front and multi-link rear suspension, with the latter also gaining liquid-filled compliance bushings to stop noise and vibration paths. Improved underbody aero properties also promote quietness. Considering how much the new Civic has grown, weight for the VTi rises only 53kg due to the use of lighter yet stronger steel.