BMW’s returning 8 Series is a judicious nod to the original, but packed with cutting-edge features

It has been two decades since the BMW 8 Series badge was last seen in Australian showrooms, but the model is back, marking a return of the German car maker’s flagship coupe. An even more vicious M8 is on the way, but for now the M850i is the only option locally, effectively taking the baton from the runout 6 Series.

It’s certainly not going to be a volume seller for BMW but the mighty two-door stands in as a new halo model for the marque drawing attention to the company’s wide range of other vehicles, not just itself. Nonetheless, this wheeled statement will appeal to a small but savvy customer base that’s prepared to sacrifice a little in the way of practicality and a serious investment, for a car that will never fade into obscurity. The original 8 Series is a testament to that. 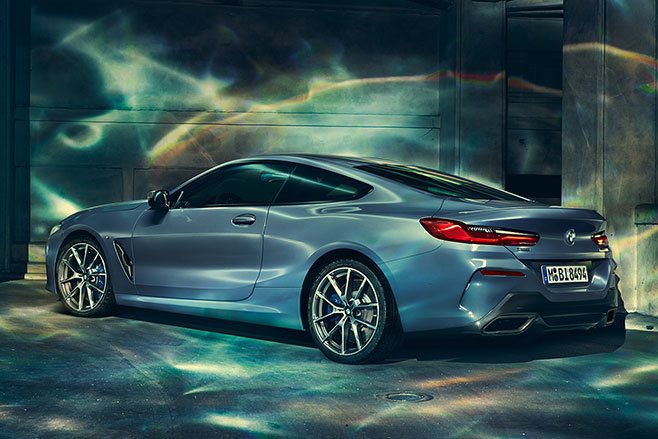 With a $272,900 price tag, the BMW 8 Series has both feet firmly in aspirational car territory, though that doesn’t mean lavish, expensive 2+2 coupes like this can’t offer good value too.

If you’re looking to get into a large, luxurious coupe with four-ish seats and a seismic power output, the options are limited. Bentley will take $422,600 from you for a Continental GT, Aston Martin charges $374,995 for the DB11, while Mercedes can offer an S-Class Coupe from $314,900.

In fact, only Lexus weighs into the segment with something that can conceivably compete with the 8 Series for less cash. Its LC 500 slips under $200,000 for both the V8 and V6 hybrid.

That actually makes the M850i fit into the more affordable end of the market and, even if you step up to the $295,900 First Edition that arrives in July. 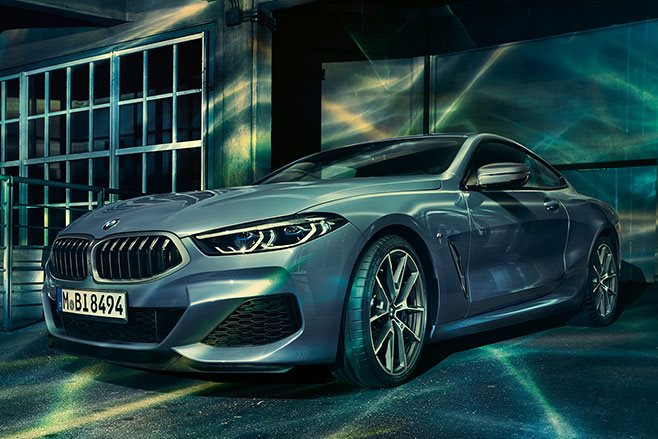 Standard oily bits include a 4.4-litre twin-turbocharged V8 petrol engine that sends 390kW and 750Nm to all four wheels via an eight-speed automatic transmission and M Sport differential. This beast of a car rolls on 20-inch wheels with run-flat tyres with pressure monitoring and adaptive suspension.

Its carbonfibre roof is unpainted for all to appreciate the exotic material, but if you can’t be bothered explaining to inquisitive passers-by that the lighter, stiffer roof saves weight, lowers the centre of gravity and looks cool, you can option a painted aluminium top for no extra cost. 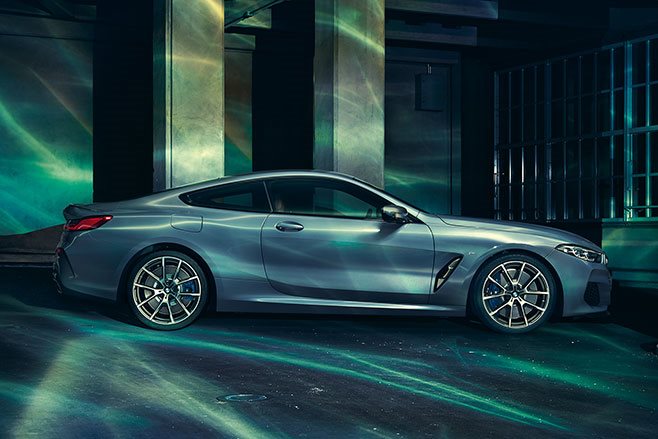 The M850i is big, really big, but its imposing exterior dimensions do not translate to similarly generous interior space. The 8 Series is spacious only in the amount of room it occupies – not the amount it provides.

Its boot offers 420 litres of space which isn’t much for a car of this size and the load area is deep but narrow, limiting its versatility. Then there are the back seats, which are little more than a gesture when the front seats are rolled back to a comfortable position.

For a car that is so massive, it’s hard to see where all the space has gone once you jump aboard. Strangely though, this too is an impractical homage to the original E31 8 Series, which also had a tiny boot and borderline claustrophobic cabin despite a hulking exterior.

But being big is not always about being practical.

At nearly five metres in length and 1.9 metres wide, the M850i has an incredible presence. Unlike hefty SUVs, it is proportionally low at 1.3 metres tall and that gives the big coupe an irresistible allure on the road. Regardless of the more detailed styling and subjective lines, the size alone is a huge part of what makes the model attractive and imposing. 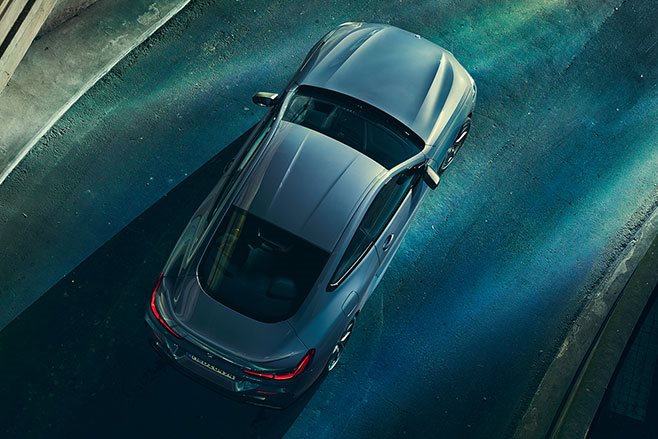 Besides a permanent all-wheel drive system that helps the big Beamer get its prodigious power to the road in all conditions, there are some other interesting safety highlights.

The company’s Carbon Core that first appeared as part of the current 7 Series construction now finds its way into this model and adds high-strength carbon composite material into critical areas of the body and passenger cell without adding the weight associated with steel.

The innovation not only reduces overall weight with the associated handling and performance benefits, but provides improved impact protection and durability if a crash is unavoidable.

Housed in the M850i’s nose are BMW’s proprietary Laserlight headlights – another feature that enhances the exterior looks with safety bonuses. After dark, the cutting-edge lights cast a brilliant blue/white beam that is effective to more than half a kilometre.

And if that’s not enough, a standard night-vision camera allows otherwise completely invisible objects to jump out of the dark. Instead of reflected light, the specialised camera looks for heat sources in the dark and can pick out pedestrians, other cars and wildlife, long before the human eye. 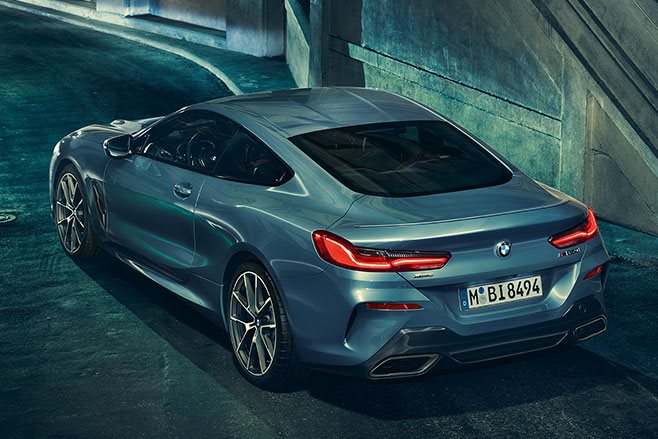 A head-up display has a screen that’s 16 percent larger than in any other BMW, the cool mood lights in the doors switch to flashing red if the reverse sensors detect approaching traffic including cyclists and, on the freeway, the 8 Series will maintain its distance from a car ahead and position in lane with the touch of a button.

Generally speaking, the advanced safety systems are seamlessly integrated but on more than one occasion the ‘gesture control’ (which allows occupants to adjust audio output volume, entertainment source and manage phone calls with hand movements) mistakenly thought I wanted to change radio station. And the lane keeping technology is perhaps a little aggressive and late in its operation.

Top marks however, go to the voice recognition, which effectively renders all buttons associated with navigation, entertainment and phone connection obsolete, such is its effectiveness. Chatting to the BMW like it was a stoic PA was both useful and a novelty that never wore thin. 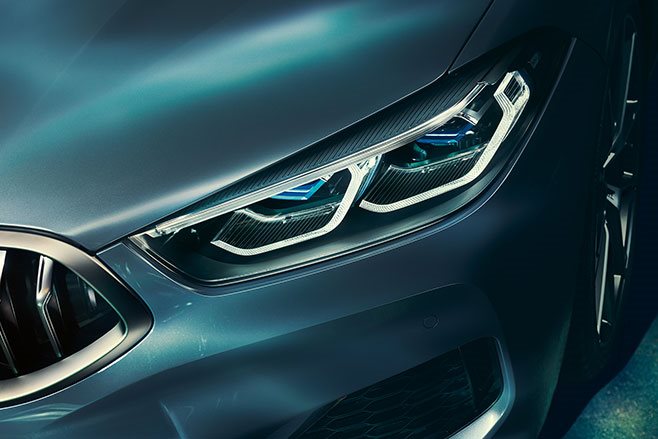 As a large GT, the M850i promises to offer the perfect vehicle for demolishing extended stretches of freeway, not just at searing speed, but in total comfort too.

And to a degree it does. The deep sports seats combined with cosy cabin creates a cosseting and protective space for covering long periods of cruising. The driving position is typical BMW with an ergonomically perfect arrangement of controls and displays. The crystal gear selector, iDrive dial and start/stop button will no doubt divide opinion, but will win more hearts at night when the sharp facets illuminate. Cool.

Cabin noise insulation is incredibly effective even with wide, sticky rubber rolling at each corner but the adaptive suspension may have been tuned just a little on the stiff side for a true GT mile-muncher.

In its original form, the E31 850i was a bit of a barge, hauling its heft lazily between corners while soaking up road imperfections and kilometres with aplomb. I can’t help but feel the modern day version could have borrowed a little of its ethos. Especially as an M8 is confirmed and will gladly take the duties of carving corners no-doubt at unbelievable speed.

Even in the softest ‘comfort’ drive mode, the 8 Series is still a little edgy and is constantly reminding the occupants that it has an M badge on the boot. There are no sub-M850i variants planned for Australia at this stage so, for now, the most comfortable option will have to be ever so slightly neurotic. 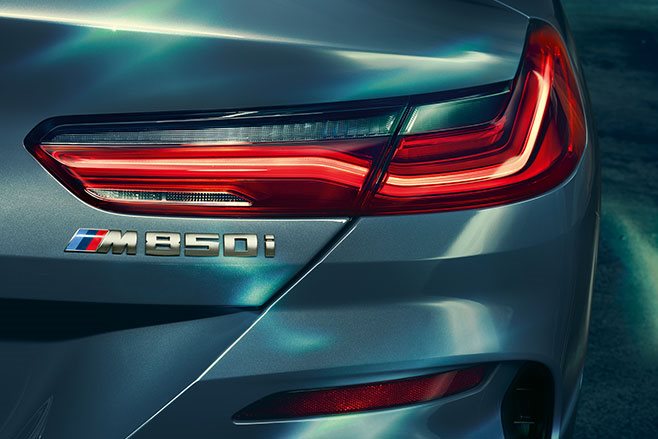 But when you really need to be somewhere in a hurry and the road there isn’t arrow-straight, the same suspension and chassis tune that renders the 8 Series just a little fussy, comes into its own.

It might have a wheelbase that measures an ocean liner-like 2.8 metres but rear-wheel steering makes the big coupe feel far shorter. Pitching into corners, the long snout points exactly where you want it and even though it is full of eight cylinders and two turbos, the steering is light and precise.

With the drive mode set to Sport, the large bore exhausts become more vocal, the adaptive suspension stiffens further and the body resists roll through corners with a defiance I didn’t think was possible in a car of such heft.

Even more impressive is the manner in which its acceleration cheats physics. Off the mark, the xDrive all-paw traction and eagre torque from the new V8 launches the M850i surprisingly fast and on to the 100km/h benchmark in just 3.7 seconds says BMW. I believe it.

And in-gear acceleration is even more impressive with zero turbo lag and a huge shunt from behind no matter what the revs. Let the bent eight wring out to the red line and it delivers a beautifully linear nature from torquey low-end to the howling limit.

Like so many BMW engines before it, I am certain this one will have many rosettes applied to the walls of its tack room.

Even in the wet, it’s possible to push the 8 Series even hard if the prospect is a little daunting at first. With a front-to-rear power split that favours the tail in true BMW character, the M850i feels like it will use its massive torque to swap ends with enthusiasm and little notice when the tarmac turns damp.

But the transmission management system is as sophisticated as the engine electronics and just enough power is fed to the front axle to keep everything pointing the most favourable direction while maximising progress. A true all-weather fast car.

But even when it isn’t going fast, the M850i is an accomplished and deeply desirable machine to behold and enjoy.

Unlike the original 8 Series which made a statement with a grille that was much smaller than the conventional passenger models, the G15 has a vast kidney grille. The adoption of huge nostrils is a bit uncouth on some other models, but the 8 Series proportions embrace the wide grin so much better. 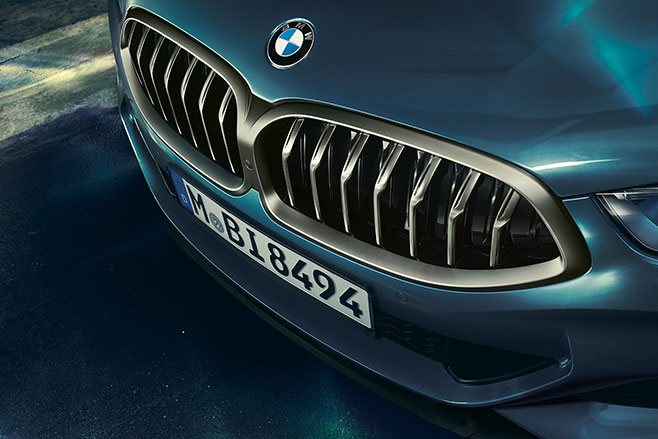 And a final note on a subjective but worthwhile feature: The Frozen Arctic Grey paint that my steed was supplied in embodied one of those greeny-blue electrical storm clouds that is brooding and angry, and about to dump an apocalyptic amount of power on something unsuspecting.

A more perfectly metaphorical colour for this car, I could not imagine.

Monstrously powerful, big coupes are not about being practical and nor are they about rationalised purchase decisions. These cars, including the 8 Series are bought with the heart and not the head.

You can fit more people and luggage in an X5 for the same footprint, an M4 will lay down a better lap time, a 7 Series has a better ride, and all of them will save you cash. But none of them will clear a pathway on the road like an 8 Series and that unapologetic air of badass is exactly what you will love about this car. And now I am completely enchanted too.