Turbocharged Cerato crowns Kia's small car range , but is it a worthy king?

Many range-topping cars from plenty of manufacturers carry model suffixes that suggest something quite special to distinguish them from the lesser siblings. Plenty of these fall are, regrettably, little more than lightly warmed-over, meaning they are tarted up with visual exterior addenda, and bundled with extra equipment, but don’t actually offer any tangible improvement in performance, dynamics, or general driver appeal.

The newly launched Kia Cerato GT is not one of those cars. It steps clear of the three models below it by not just providing an appreciably higher list of standard equipment, but also by having a far better, much punchier (and more frugal) turbocharged engine, as well as a thoroughly revised suspension, tyres and braking set-up to increase its appetite for corners and deliver a far greater level of driver satisfaction.

The jump to this top-spec Kia Cerato is not insubstantial at $4250 over the Sport+ model below it, but overall, the GT’s driveway pricing of $31,990 is keen when rated against similarly equipped competitors such as the Mazda 3, Ford Focus, VW Golf and Toyota Corolla. Factor in the industry leading seven-year/unlimited kilometre warranty and Kia’s reasonable servicing costs, and the GT starts to look very attractive. Historically this model has not been a resale champion, but that remains unproven with the current iteration and if you intend to hold onto it for four or more years, this may be less of a concern. 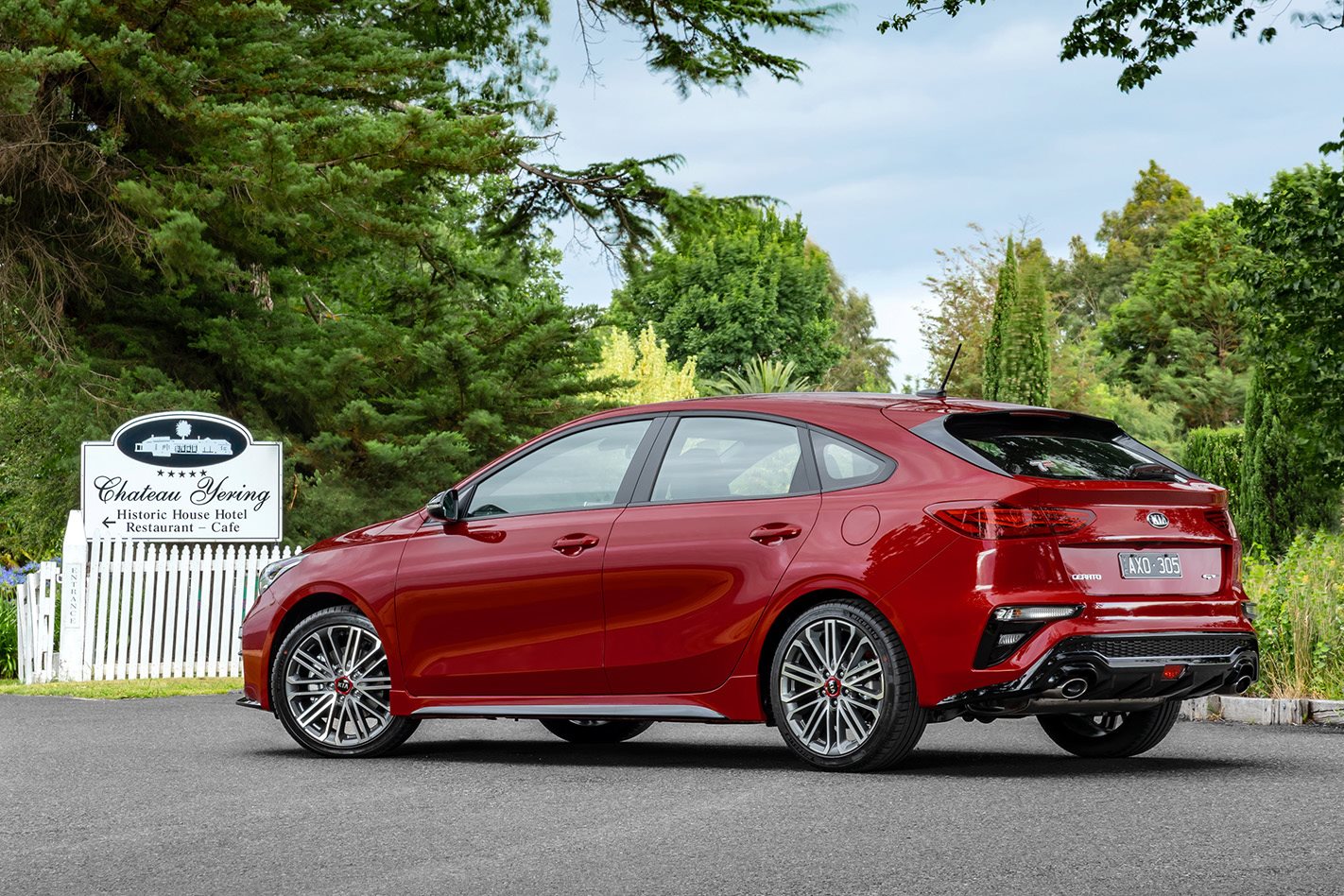 Even the base Cerato S is not exactly a povo pack, but the GT ramps up the standard equipment with a stack of desirable gear to help justify that price jump from the Sport+ model below it.

In terms of exterior upgrades, you’ll quickly pick the GT via its body-coloured sideskirts with black accent strips, and a revised rear fascia with twin exhaust tips. At the front, LED headlights light the way, while exterior mirrors feature a high-gloss black finish.

Inside, the GT is an appreciably more sporty and visually appealing offering. The seats are far more deeply bolstered, trimmed in perforated leather with red accent stitching, and offer extra adjustability and two-position memory function. They also also feature three-speed ventilation (as well as the heating provided in the Sport+ spec.) The wheel is a nicer flat-bottom item, the pedals are finished in aluminium, and wireless phone charging is there to avoid cable-spaghetti syndrome. 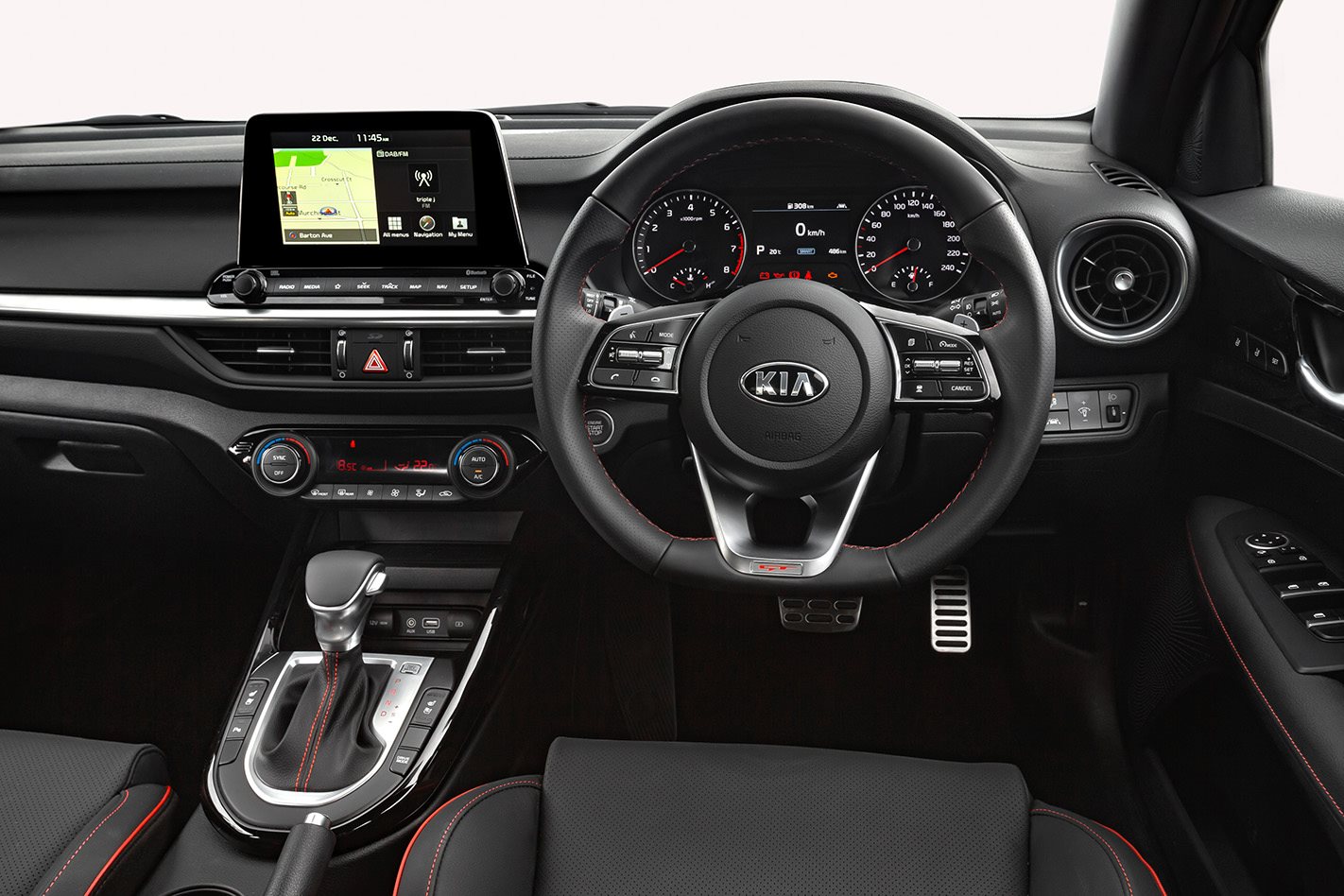 Music fans will also instantly hear the improvement delivered by the eight-speaker JBL audio system, which replaces the regular six-speaker set-up, and features separate amplification and a rear-mounted subwoofer. The 8.0-inch central touchscreen is home to factory satellite navigation. The level of standard safety equipment is also excellent, which we’ll get to in a second.

We’d say ample for a family of four with kids up to early teens. Rear seat legroom can get tight if a tall driver or passenger need their seat slid all the way back, but if that’s not the case then the back seat feels perfectly adequate. Boot space for the hatch is a healthy 428 litres with the seats up, stretching to 741 litres with seats folded. 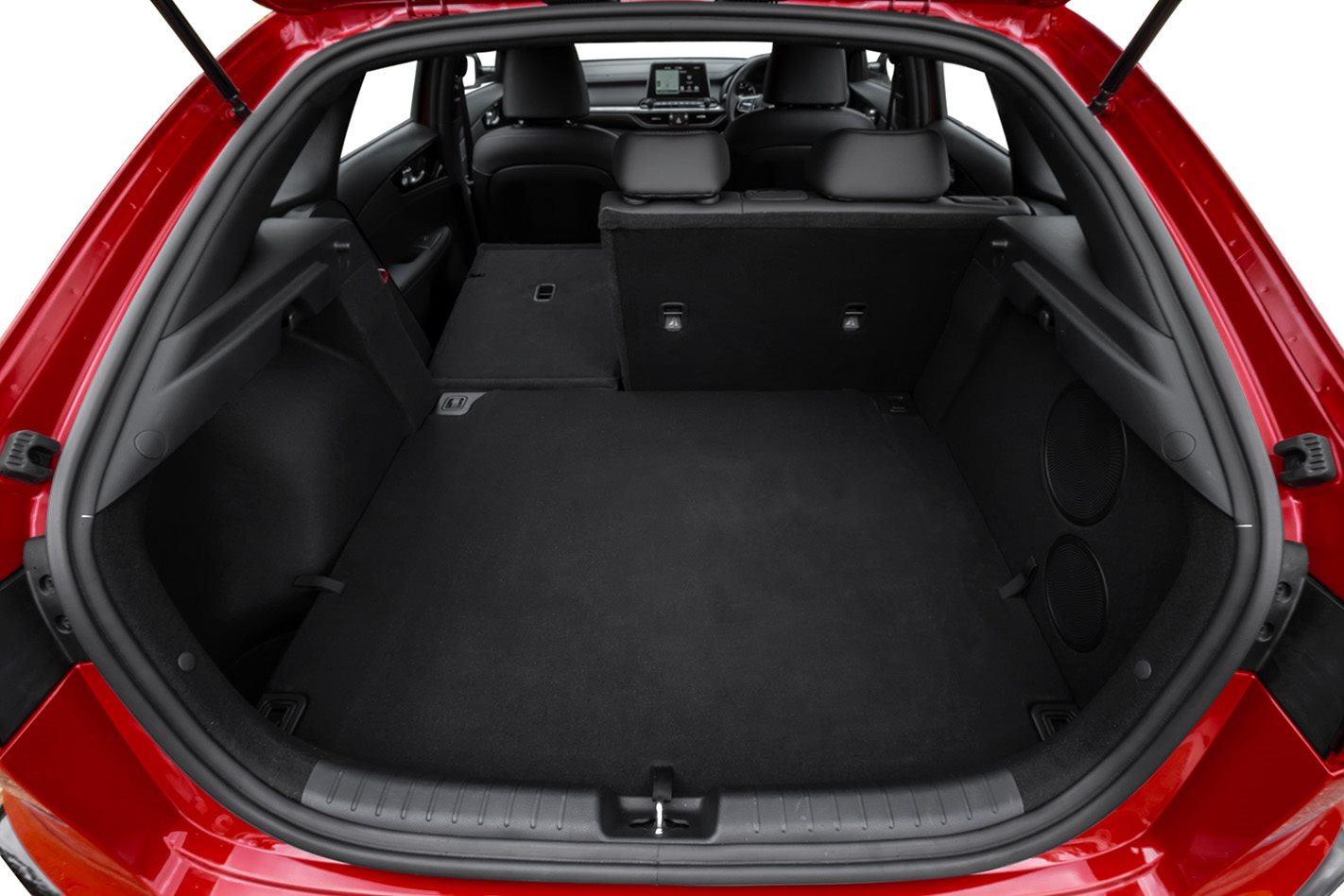 We rate the GT quite highly here overall, and very strongly in its class. It features adaptive cruise control, lane-departure warning, blind-spot monitoring, driver fatigue alerts, speed-sign recognition, rear cross-traffic warning, and AEB. Not all AEB systems are created equal, though, as evidenced elsewhere in the Cerato range (which take a less-capable AEB system and receive a four-star ANCAP rating as a result). This is the more sophisticated system, which uses a combination of radar and camera to detect cyclists and pedestrians as well as cars. So yes, excellent job, as evidenced by its five-star ANCAP rating. 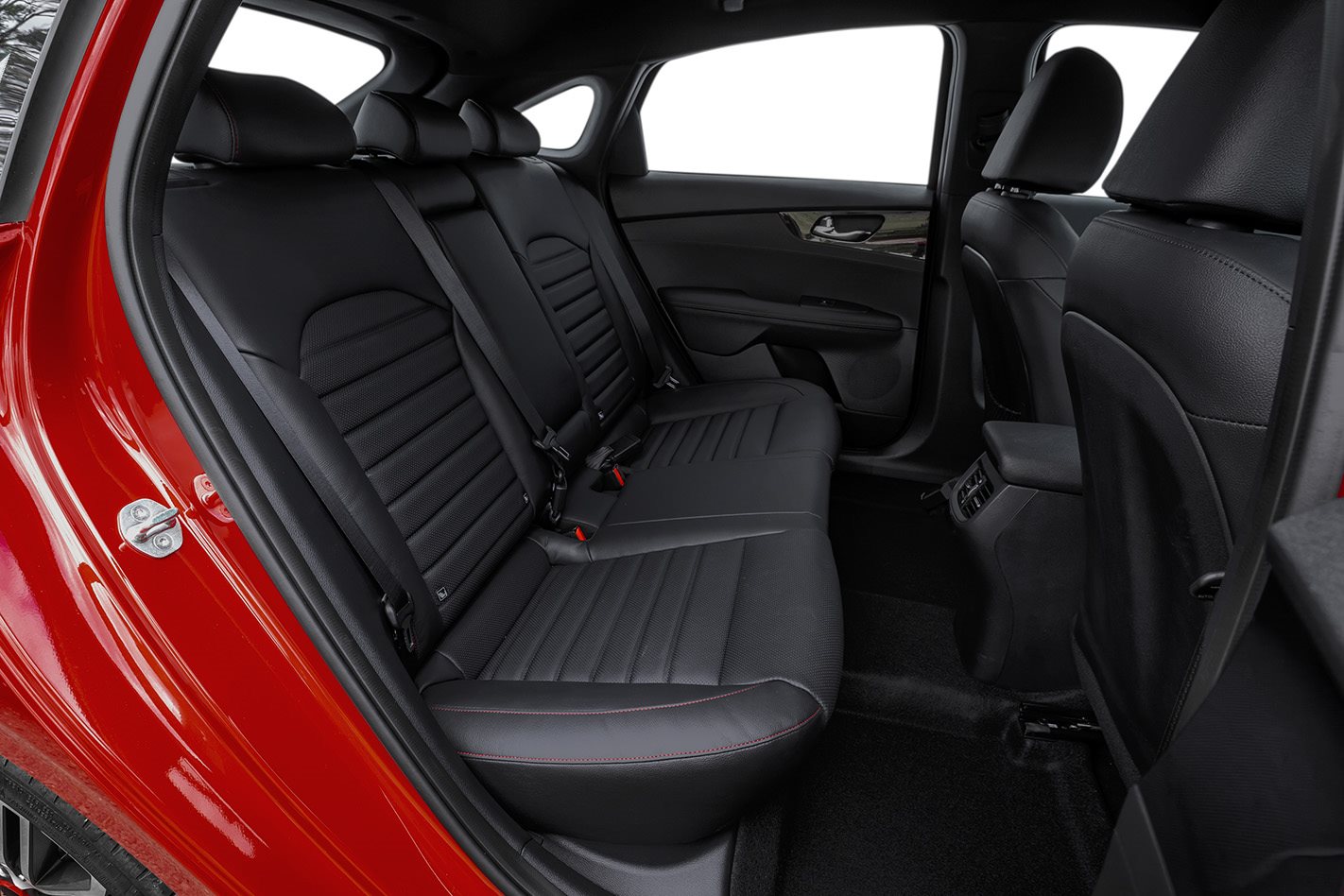 Let’s start with those front seats, which are far more deeply bolstered that those in the lesser Cerato models, meaning much better lateral support through corners, and greater comfort and support overall. Wind noise is well supressed; tyre noise is not excessive, but the high-performance Michelin Pilot Sport 4 tyres on 18-inch wheels are quite surface-sensitive, and can create a moderate roar on coarse-chip bitumen. In terms of climate control, seat ventilation or heating, space to drop your phone and wallet, the GT scores top marks. No complaints about the rear seat either; its base is long enough to support adult legs, and there’s ample shoulder and headroom for two burly blokes; plenty for everyone else.

As for ride comfort, it’s far from plank-like, but it does lean more towards ‘futon’ than ‘pillow topper’. You need to be willing to accept this trade-off for the reduced bodyroll in corners that comes with the revised suspension. 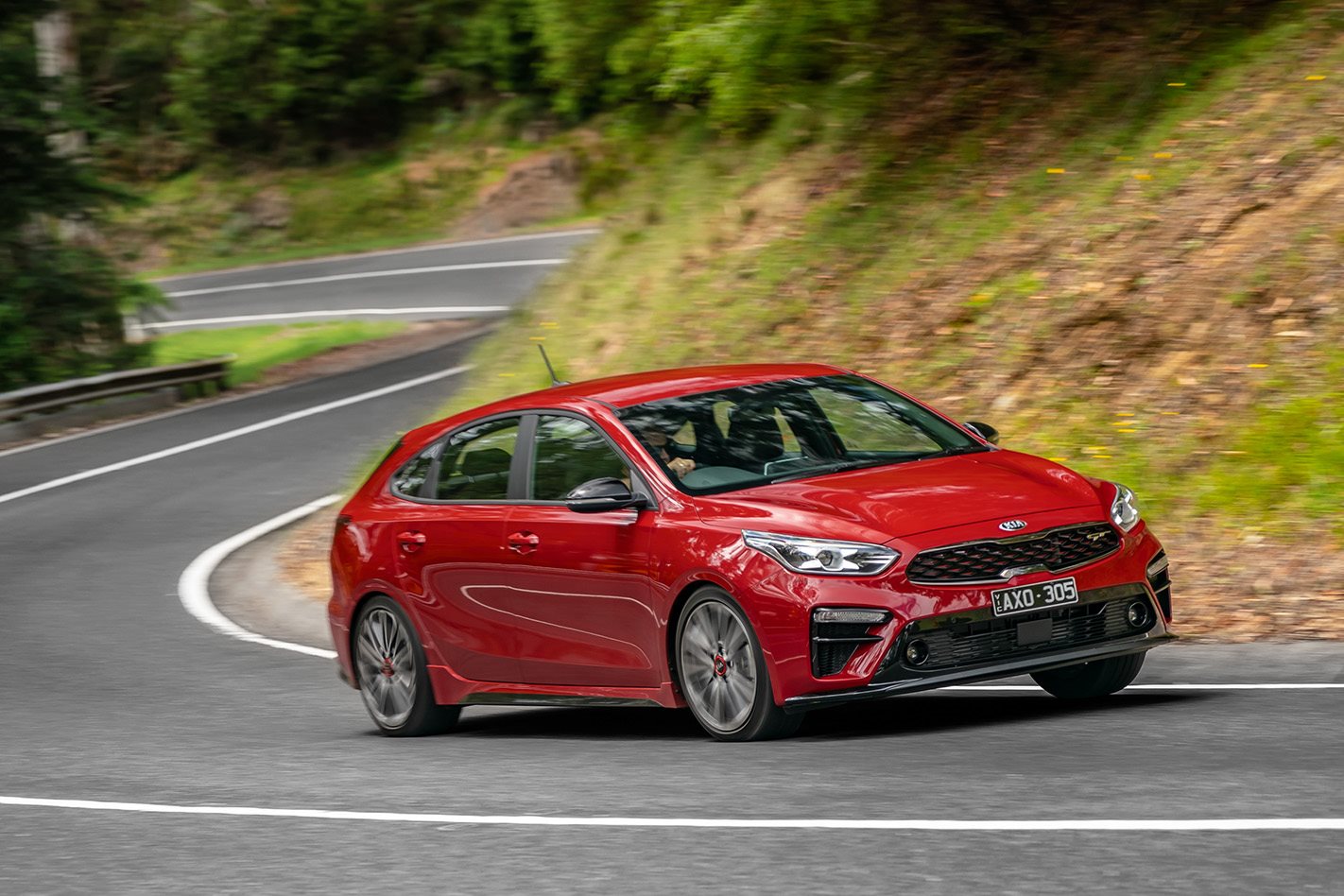 The most significant difference, initially at least, is that the way the new engine raises the GT’s responsiveness compared to the rest of the range. Rather than running the dated, noisey atmo 2.0-litre petrol four used across the rest of the range, the Cerato GT is fitted with the a 1.6-litre, direct-injected turbo-petrol four that is used in the Hyundai i30 N-Line (formerly known as i30 SR.) It produces 150kW and 265Nm, and makes a world of difference to how the Cerato drives. Instead of a fairly hollow and languid midrange delivered by the 2.0 atmo, the 1.6 turbo digs in early and feels eager and strong. At higher revs it’s not exactly hushed, but is way less intrusive and strained sounding compared to the 2.0-litre.

Fact is, though, you really don’t need to stretch it to maximum rpm to hustle along swiftly or overtake quickly and safely. Upshifting around 5500rpm is ample for even press-on driving conditions, and there’s not a huge amount to be gained by wringing it out anyway. Like most turbo engines, this one does its best work in the midrange, feeling grunty and robust from around 3000rpm to that 5500 point. Also aiding its response is the move to a seven-speed dual-clutch transmission, replacing the six-speed conventional automatic used by other Cerato variants (a manual is offered only on the entry-level S model). 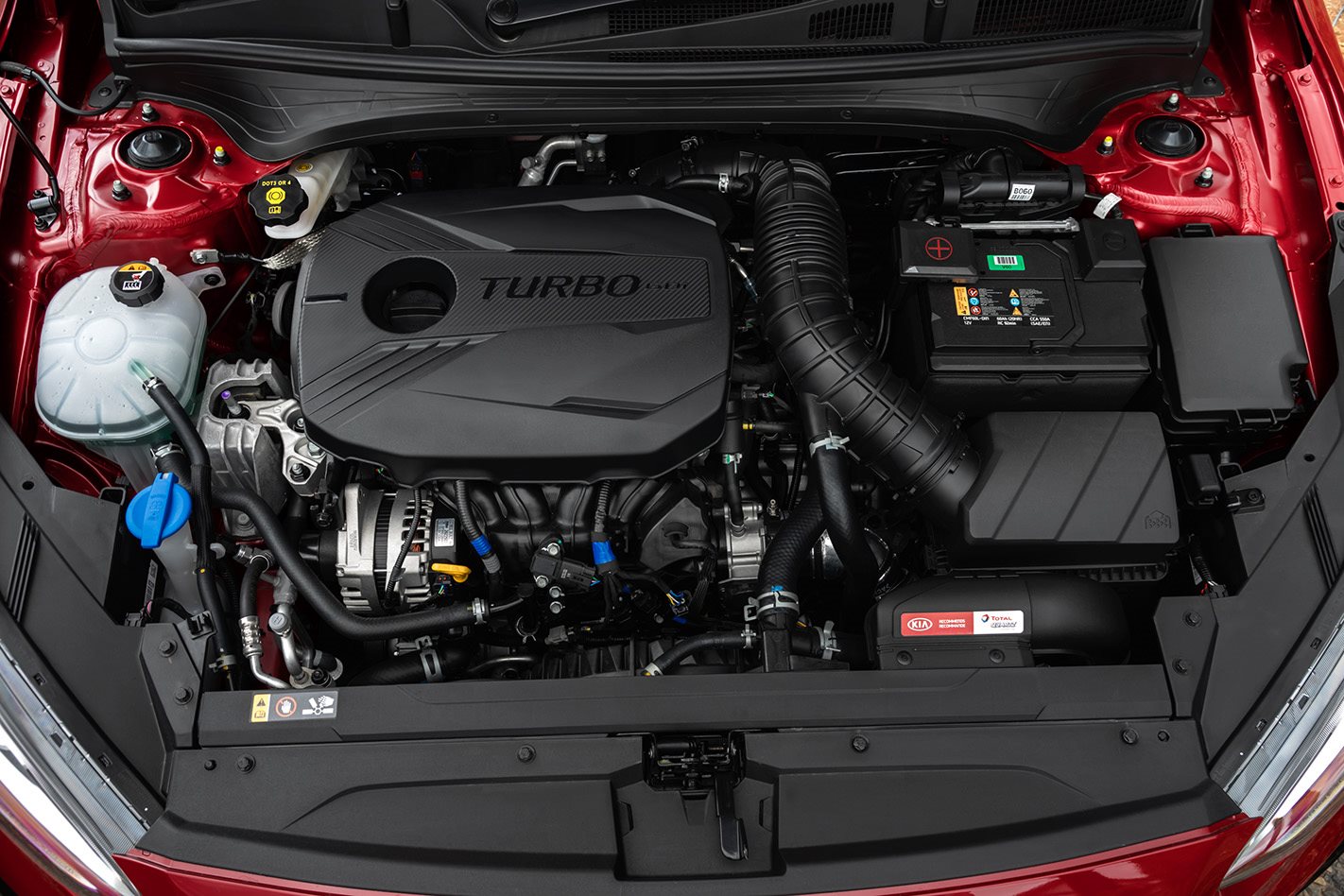 Further driver satisfaction comes from the revised chassis tune and improved wheel and tyre package. Regarding the former, Kia’s local suspension tuning division arrived at a set-up that is significantly firmer than that run by non-GT-spec Ceratos, featuring stiffer springs, upgraded dampers, and thicker anti-roll bars. The software for the steering power assistance has also been recalibrated to deliver more weighty, driver-centric feel through the wheel. Appreciably more grip is delivered by larger 18-inch wheels (up from 17s on the Sport+ model one model rung below) running 225/40 R18 Michelin Pilot Sport 4 tyres.

The trade-off is that ride as mentioned - it’s unapologetically firm, and can feel a bit reactive and restless at suburban speeds. However in more flowing, open driving conditions, chances are you will appreciate the better body control and absence of the occasional wallow that can afflict the softer, lesser models below the GT. 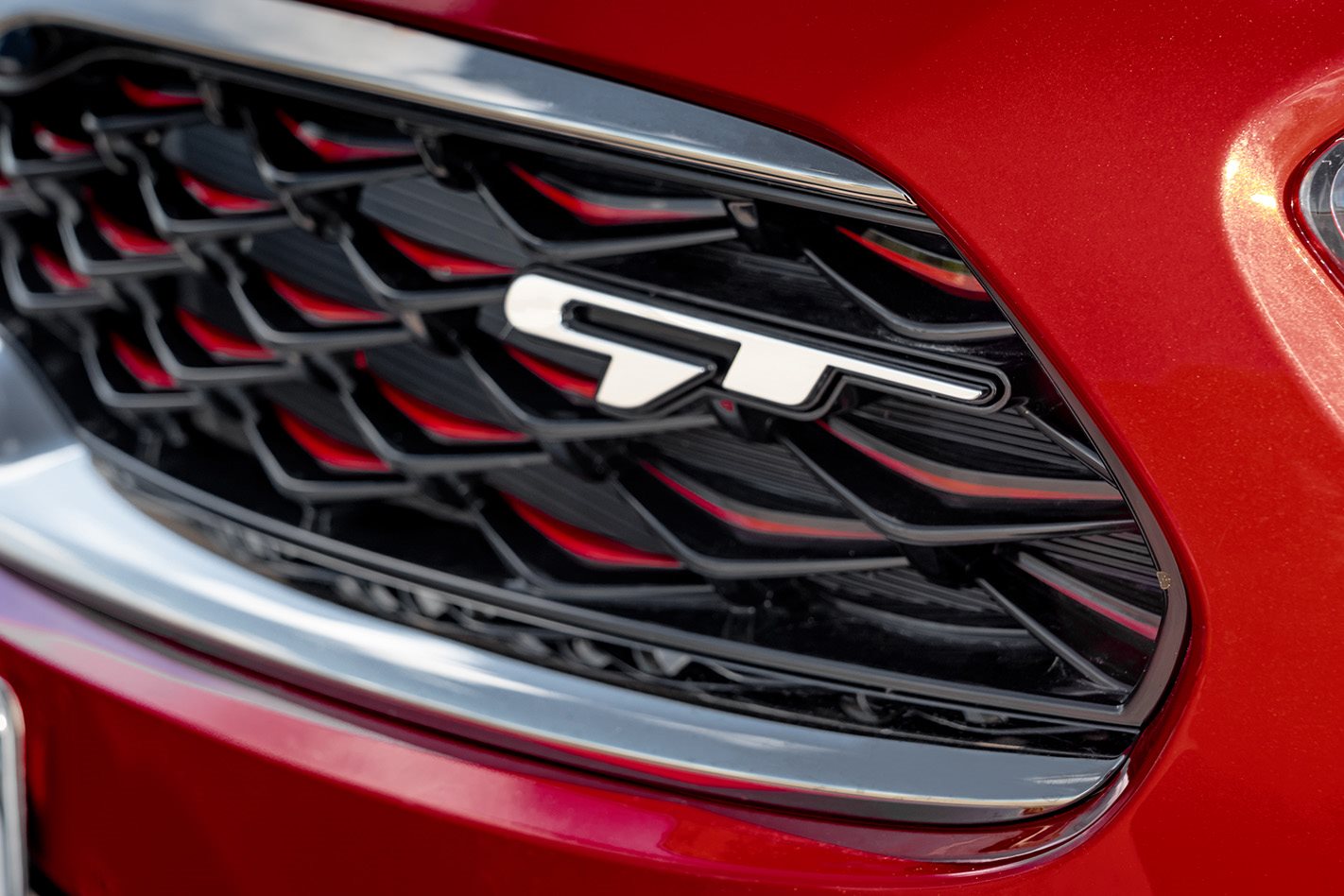 Apart from the Stinger, we reckon this could just be the best-driving Kia in the range. It sets out to be a warm (not hot) hatch (or sedan) and mostly nails the brief.  If we’re being picky, we’d like a slightly sweeter engine note at high revs, and keen drivers who really probe the limits of grip in appropriate driving conditions will notice that the stability control system intervenes too early and with little subtlety. But overall, the GT delivers enough improvement and provides enough driver involvement to justify its price hike over the Sport+, and gets a resounding thumbs-up from us.