When you look at the enormous range of small SUVs available now, it’s hard to imagine a time when such a model of car was revolutionary – but in 2010, it was. The Range Rover Evoque went against everything Range Rover stood for.  Instead of big, bold and bad-ass, the low-slung and clamshell-like Evoque was small, fashionable and feminine.

At the time, it was considered by many as the hairdresser car of the SUV world, a pox on the tough, utilitarian house of Land Rover. In short: the Evoque was the Audi TT of SUVs. Even Jaguar Land Rover itself didn’t even expect it to be a hit.

Fast-forward to now, and more than 772,096 Evoques have been sold around the world, helping forge the luxury compact SUV’s place as a fashion item. And unlike many of its competitors, the Evoque has the looks AND the 'can do' capabilities and integrity of a Land Rover (even though many will probably never experience the cold embrace of a river or rocky incline).

The new MY20 Evoque arrives in dealerships this week, with sales starting on June 1. Aside from its grown-up exterior and slightly more spacious interior, it is more high-tech and more environmentally woke than ever before. Just ahead of its arrival we look at five of the new Evoque’s coolest and most futuristic details to note.

A common complaint with the Evoque was the lack of vision out the rear window, a concern the British marque’s engineers have taken on board. Much like the one installed in the Nissan Patrol, with the flick of a button, the rearview mirror can be turned into a camera for high-definition, 50-degree wide-angle views, no matter what your cargo is.

But where Range Rover gets it right is that the ClearSight Rearview camera is actually placed on the roof (where an aerial fin would be), and has a water-repellent coating, so even if you are offroading, it’s less likely to get covered in mud, dust or water.

Further to the mirror camera, the Evoque uses cameras on the front grille and door mirrors to project a virtual 180-degree view of the road under the car, projected onto the centre console. It's helpful for navigating rocks, water and tight curbs, which, when you’re spending between $320 and $3500 on wheels, is handy. 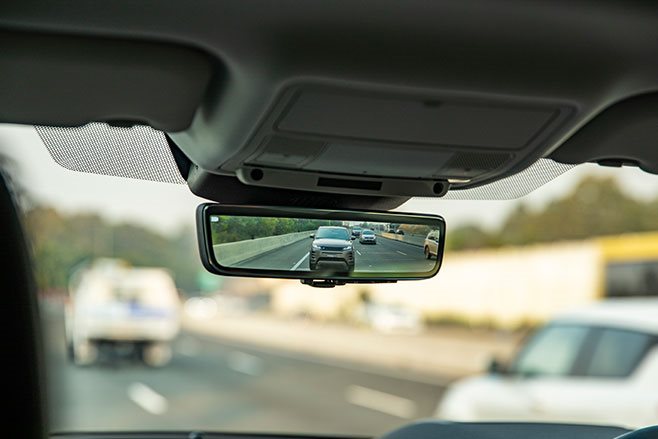 Using Land Rover’s InControl Remote app on a smartphone, Evoque owners can lock, unlock, pre-heat or cool the cabin, find the car, check fuel range and more. The car will also receive over-the-air updates to its systems, taking away the need for a dealership pit stop every time there’s an infotainment update (and yes, this time Apple CarPlay and Android Auto come as standard).

Rolling on from Land Rover’s carbon neutral manufacturing certification and the vegan and eco-friendly interior that made its debut in the Velar, the new Evoque continues Land Rover’s commitment to sustainability. Containing 33 percent recycled materials, including plastics, natural fabrics and post-industrial sourced materials.

In fact, vegans have the option of leather-like performance material or a Kvadrat interior, a wool blend and synthetic suede cloth that is made from 53 percent plastic bottles (per vehicle). The Evoque also boasts a brand new textile made from Eucalyptus.

The advantage of this new Eucalyptus textile over a typical car interior is that it uses less water, therefore has less impact in manufacturing and sourcing. 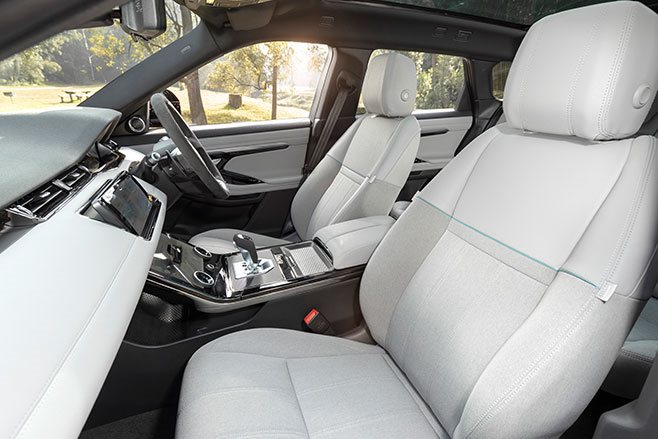 Those interested in stylish electrification can rejoice with the news that a plug-in hybrid (PHEV) Evoque will be arriving within 12 months. However, from launch, Land Rover has announced a 48-volt, mild-hybrid powertrain option that, at speeds below 17km/h will kick in and shut off the engine to minimalise emissions.

It’s small, but the MHEV ends up reducing around 8g of CO2 per km and reducing up-to six percent of fuel consumption.

Read more: What is a mild hybrid?