Hyundai's most basic hatch is now anything but

This is a high stakes game. The latest generation Hyundai i30 has consistently ranked among Australia’s favourite cars.

READ Facelifted Hyundai i30 pricing and features
It must be very stressful replacing a best seller. You must add but not subtract, whether that be styling, performance, specification, convenience and, in particular, pricing! 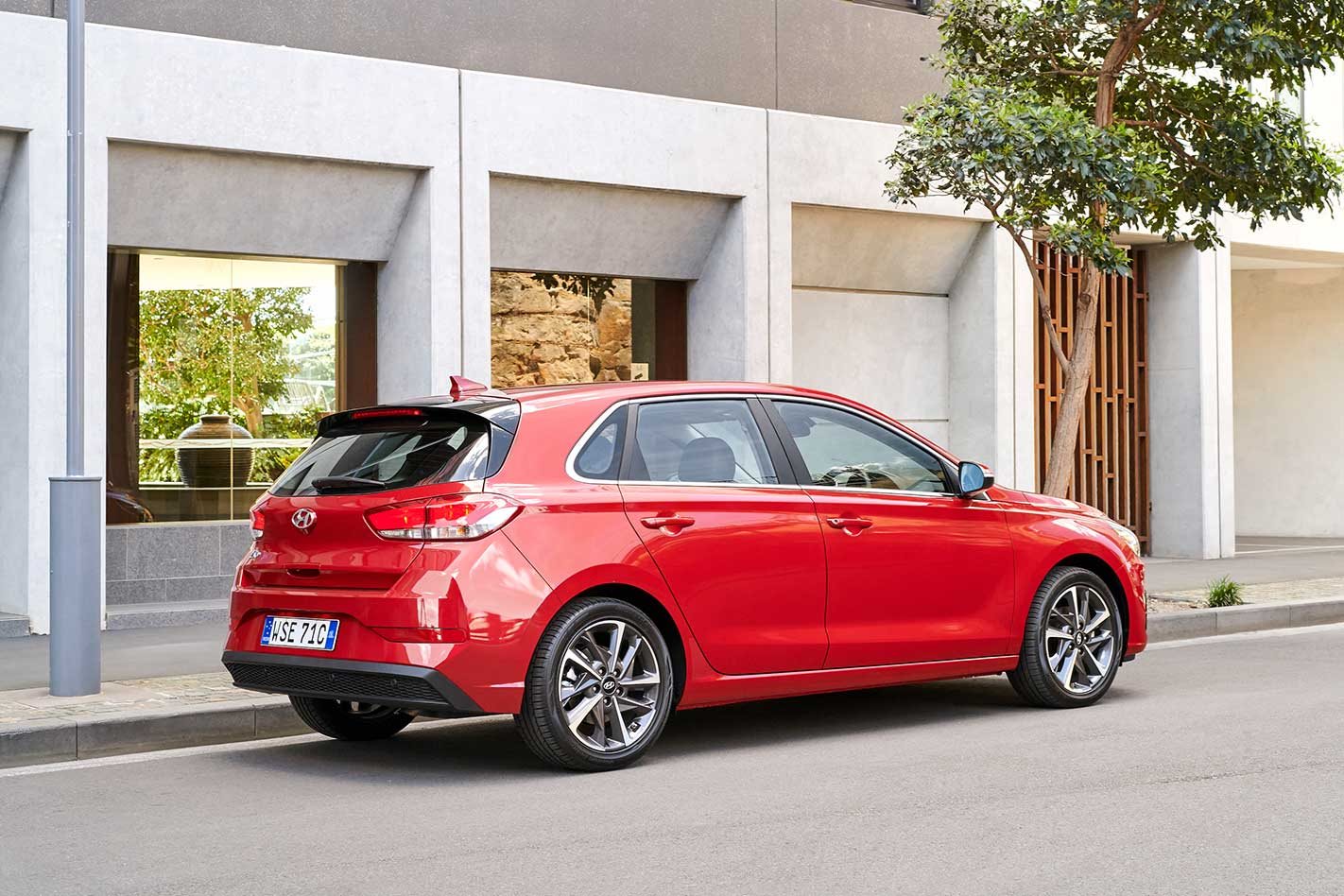 In this case there is good news and bad news. This is the entry-level model, which has dropped the ‘Go’ suffix to be simply called i30, and the bad news is its predecessor’s eye-catching $19,990 (MSRP) entry ticket is a thing of the past.

The new i30 starts at $23,420 (MSRP) but this is with a six-speed manual, so for the majority of buyers the range kicks off with the base automatic at $25,420, which equates to $27,490 driveaway according to Hyundai’s website at the time of writing.

READ Which manufacturers offer the longest warranties?
Every i30 scores a five-year unlimited-kilometre warranty and Hyundai offers pre-paid servicing, with three years quoted at $777, four years $1136 and five years $1395. 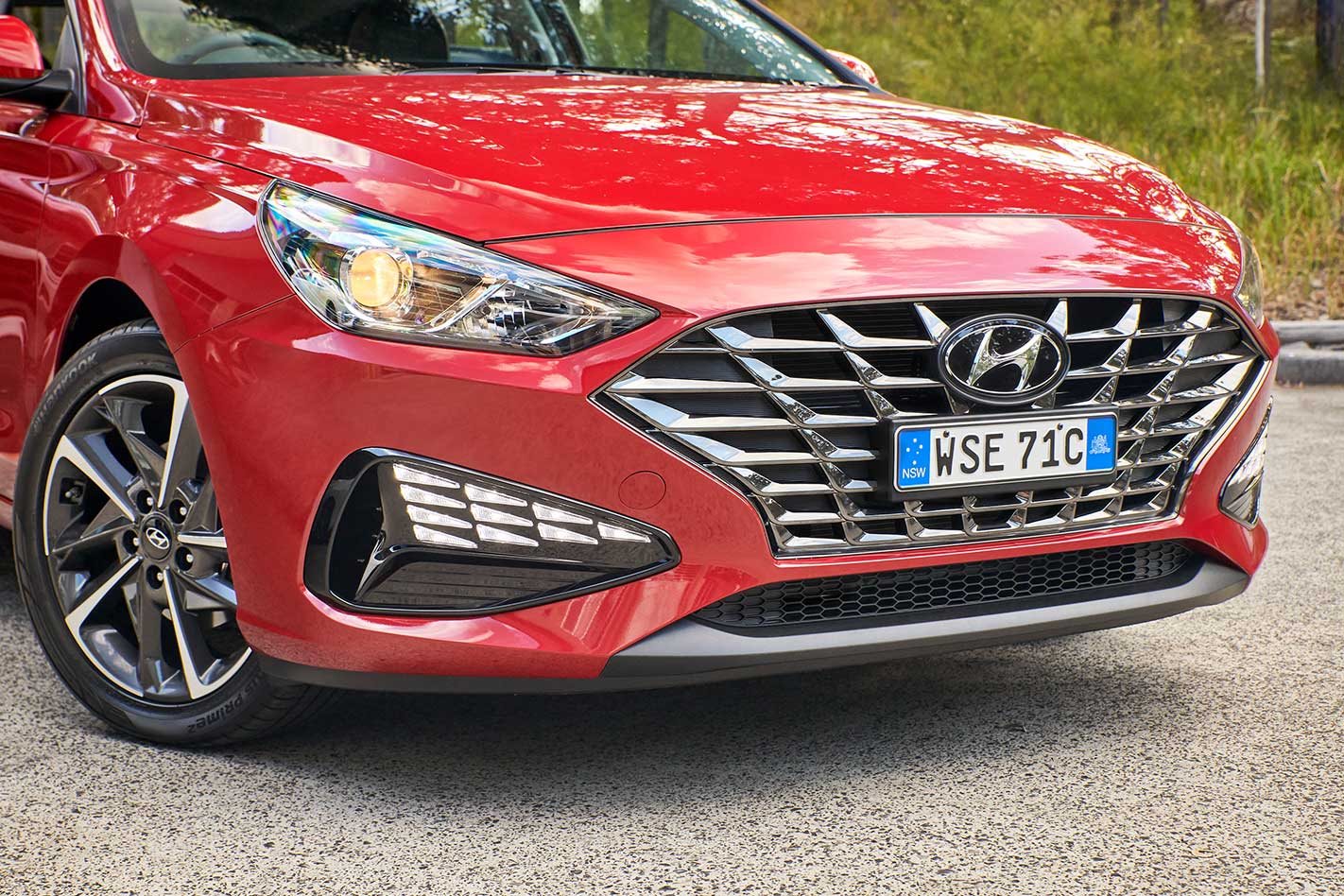 Hyundai has made the i30’s styling much bolder, obviously happy to be a little more polarising as a trade-off for grabbing more attention. The front grille is bigger, more aggressive and with more ‘bling’, while there are also new lights and a new front bumper.

At the back the bumper has been redesigned with the reflectors positioned lower and a black roof spoiler added for a sporting touch. 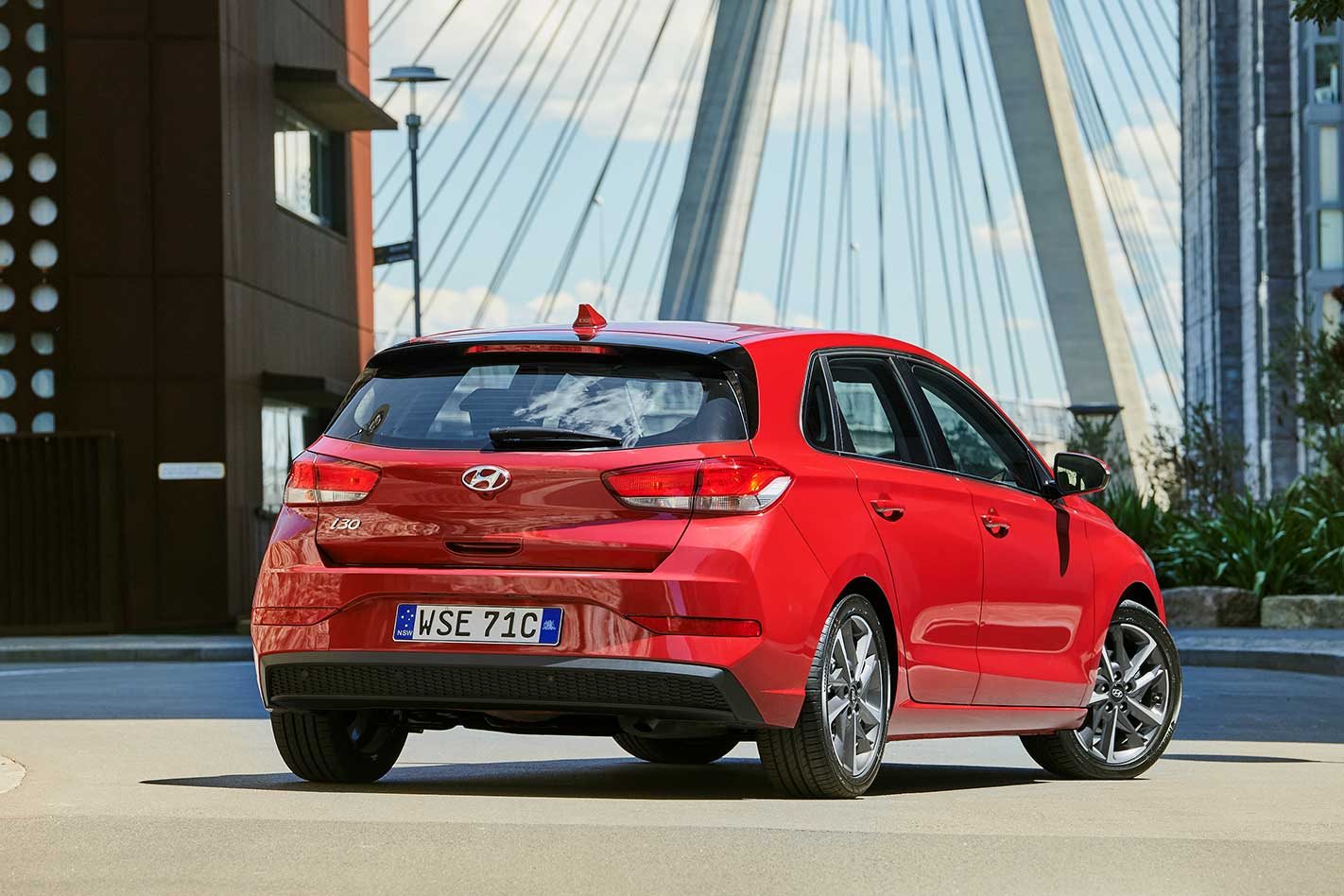 There is a full-size spare on board, too, which you won’t think about until you need it the most – well done Hyundai. 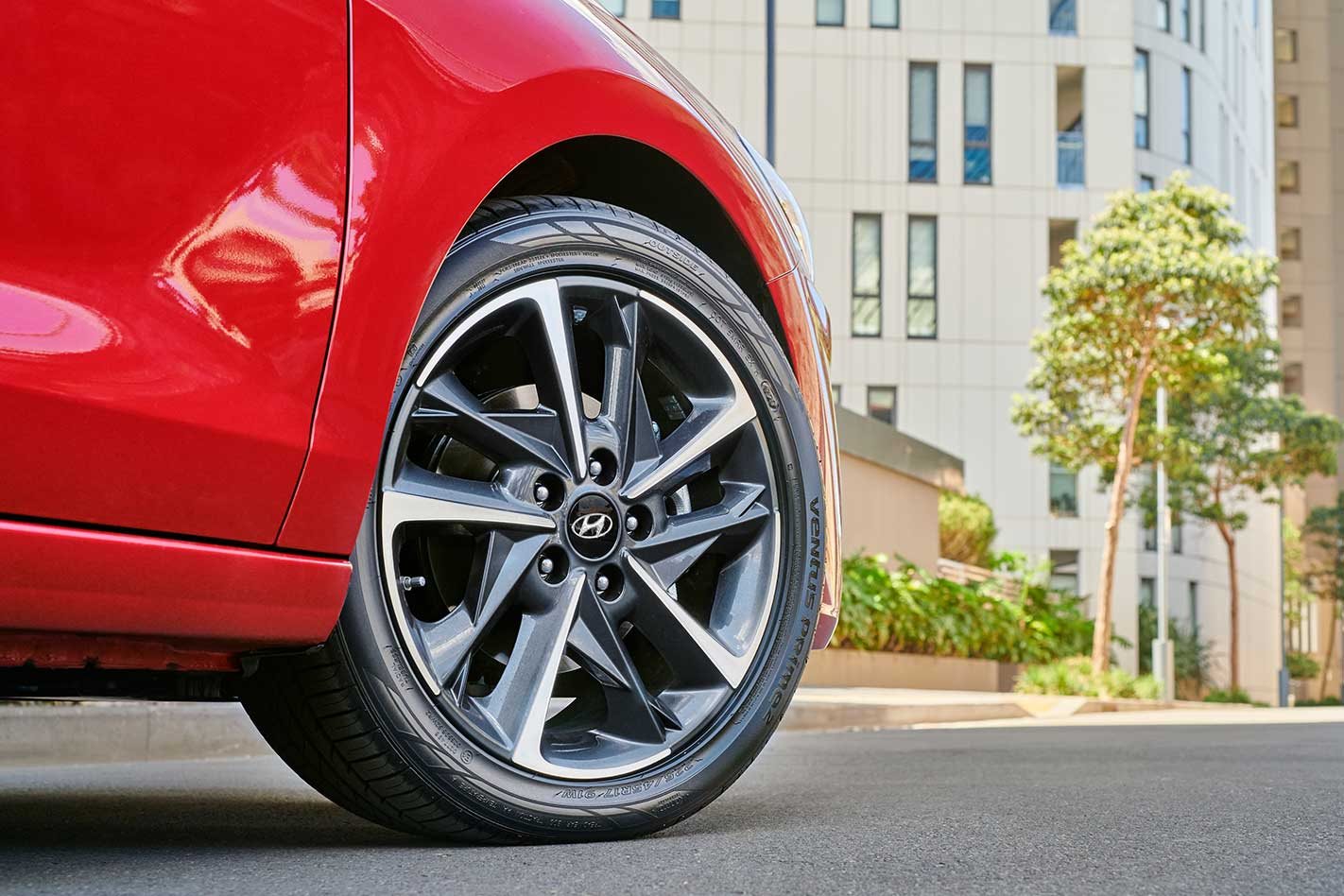 Personally, I don’t love the new look but it definitely makes more of a statement and the small touches, such as the standard alloys and spoiler, mean no one will suspect you bought the ‘base model’.

Inside it’s a similar story: the basics are the same but small touches have elevated the look and feel of the interior. The biggest lift has been the addition of leather to the steering wheel and gear knob, a minor upgrade that yields a huge improvement over the shiny, slippery plastic of the previous i30.

The manual handbrake has been replaced by an electric one, creating another storage cubby in the centre console, while the storage space in front of the gear lever now has a door covering and passengers in the rear will be thankful for the installation of air vents. 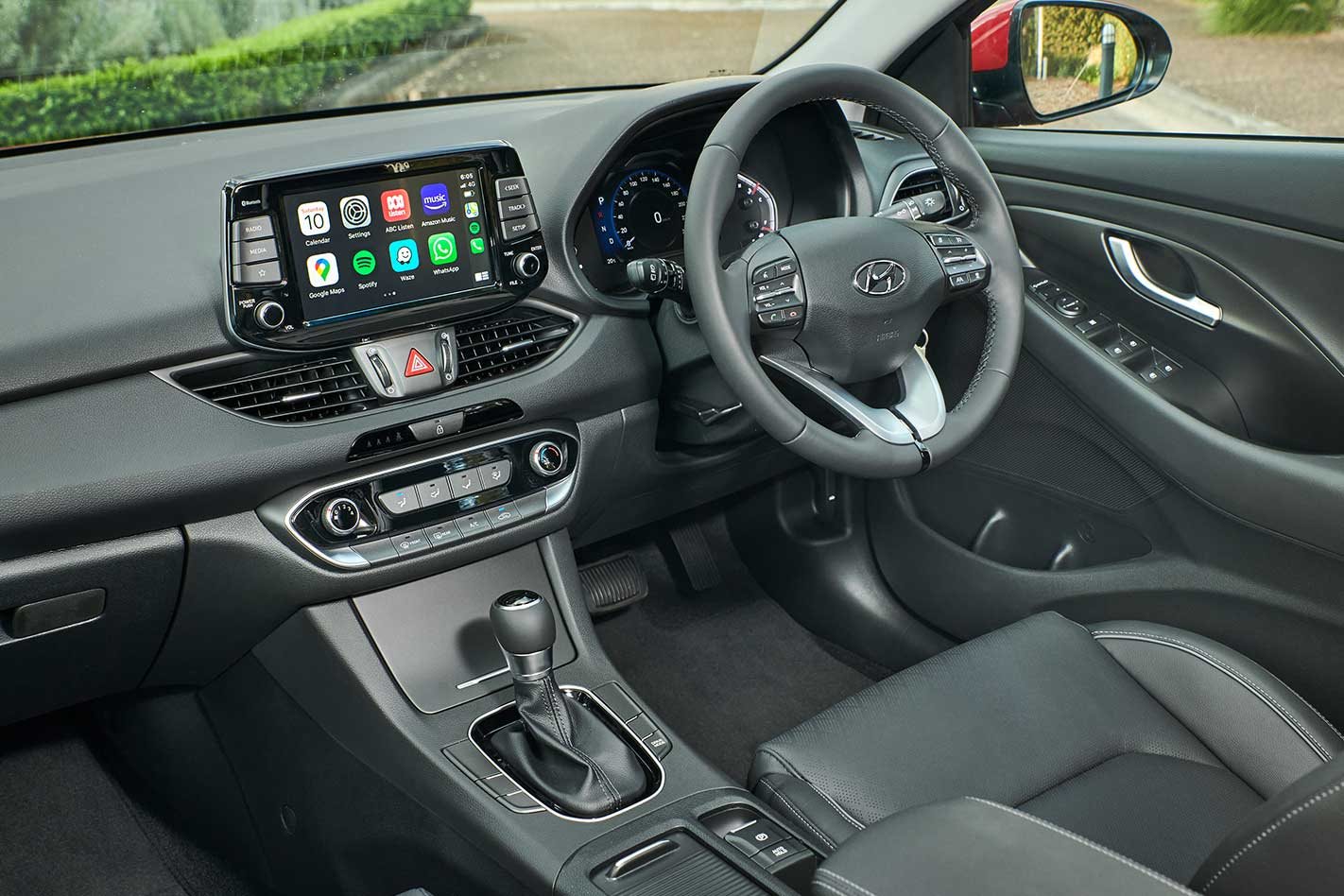 There is plenty of space front and rear on the cloth seats, which might seem like a downer for those who equate leather with luxury, but it’ll save you from burning body parts in the summer and freezing them in the winter.

Space will be plentiful for up to four adults and the driving position is widely adjustable, while in the rear the boot can accommodate 395 litres of luggage with the rear seats in place and 1301L with them folded.

This is well ahead of the likes of the Toyota Corolla and Mazda 3, though slightly less than the Kia Cerato and the Honda Civic. 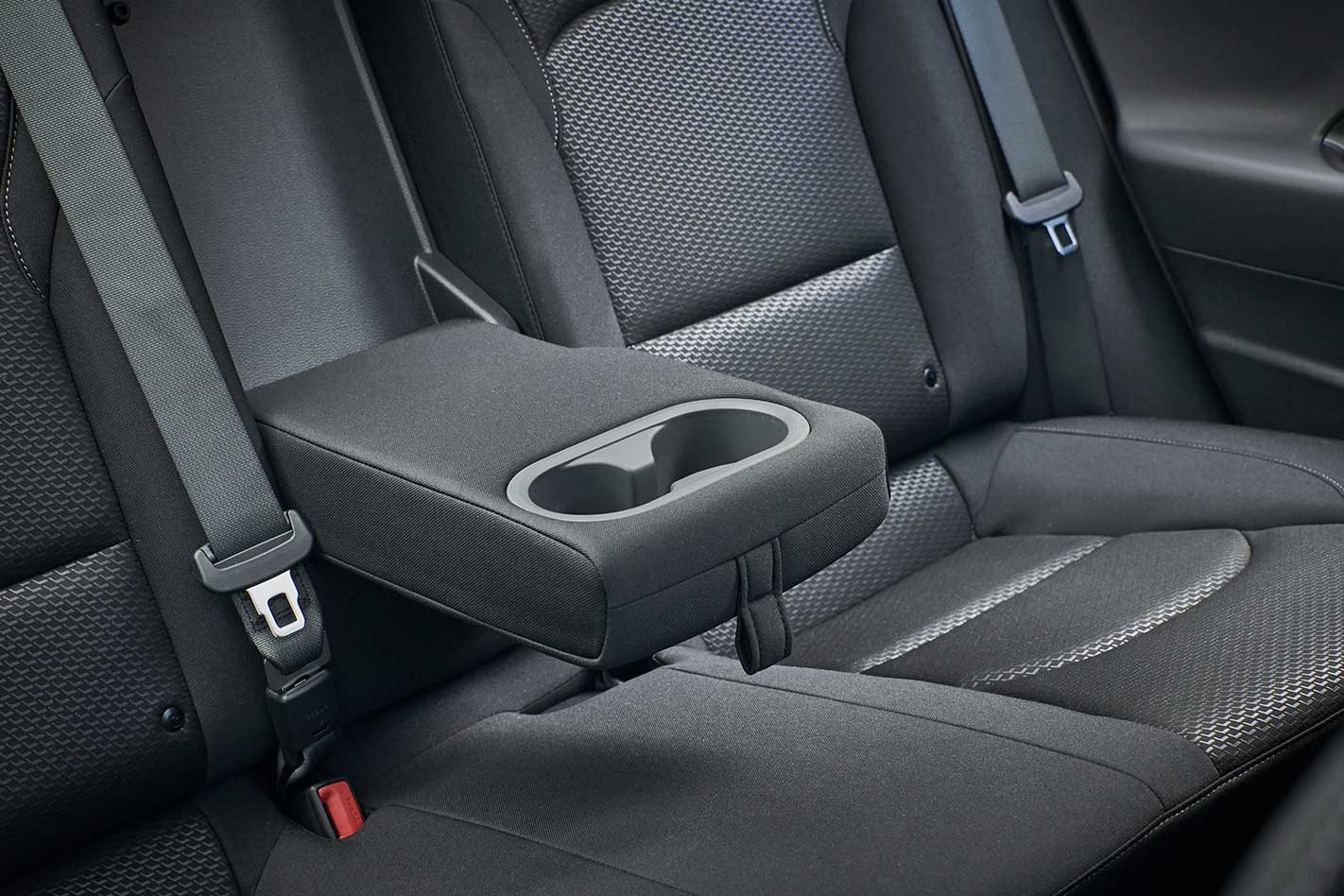 Be aware, though, that the folded rear seats create quite an obstacle halfway through the load space that can be a bit awkward when loading larger objects.

Where the new Hyundai i30 has taken a big leap forward is in technology. Even this base model includes a larger 8.0-inch touchscreen infotainment system with wireless smartphone mirroring, as well as Bluetooth connectivity and USB input.

Not all the tech is good news, the previous i30’s clear, simple analogue instruments (speedo and tachometer) being replaced by a 7.0-inch ‘Supervision’ display flanked by analogue tachometer, fuel and temperature gauges. Flashier, for sure, but a less elegant solution in my eyes. 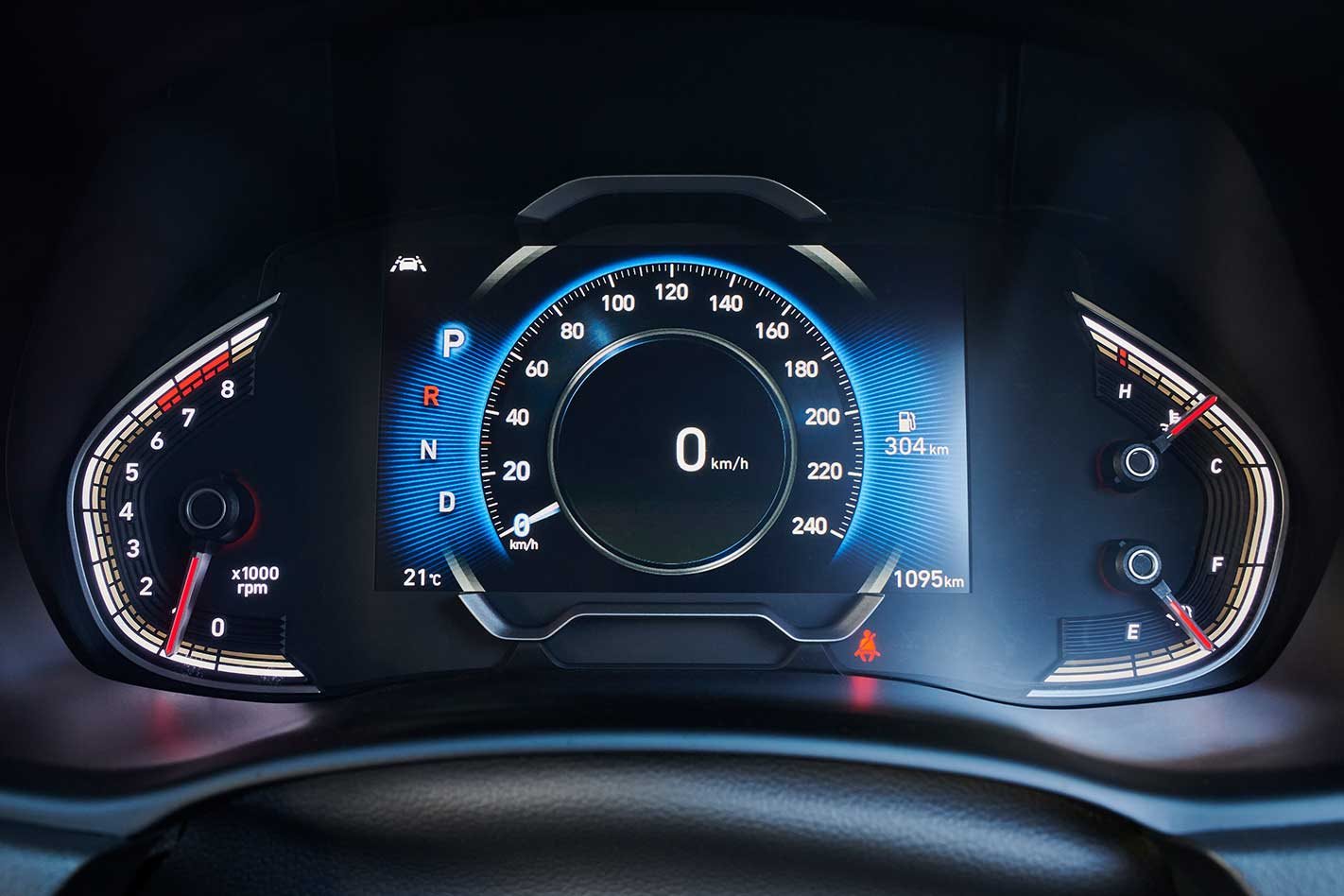 What is good news is a vastly upgraded list of active safety equipment, bringing the i30 right up to date in the small car class. Every i30 has Forward Collision Warning and Assist, including pedestrian and cyclist detection, Lane Following Assist, Lane Keeping Assistant and Smart Cruise Control with Stop & Go function (automatic transmission only).

There are a couple of notable omissions such as blind-spot warning and rear cross-traffic alert, which are limited to the Elite variant, but for a basic hatch to offer semi-autonomous driving technology like this is impressive and suggests the i30 would have no trouble retaining its five-star ANCAP rating from 2017.

That said, the lane-keep assist can be a bit over-zealous and was usually turned off in an urban environment.

Under the bonnet is a 2.0-litre four-cylinder engine producing 120kW and 203Nm. Europe has a number of smaller, more efficient engines available but Australia’s Korean-built i30s use the older naturally-aspirated unit, unless you stretch to the N-Line and its 150kW/265Nm 1.6-litre turbocharged engine. 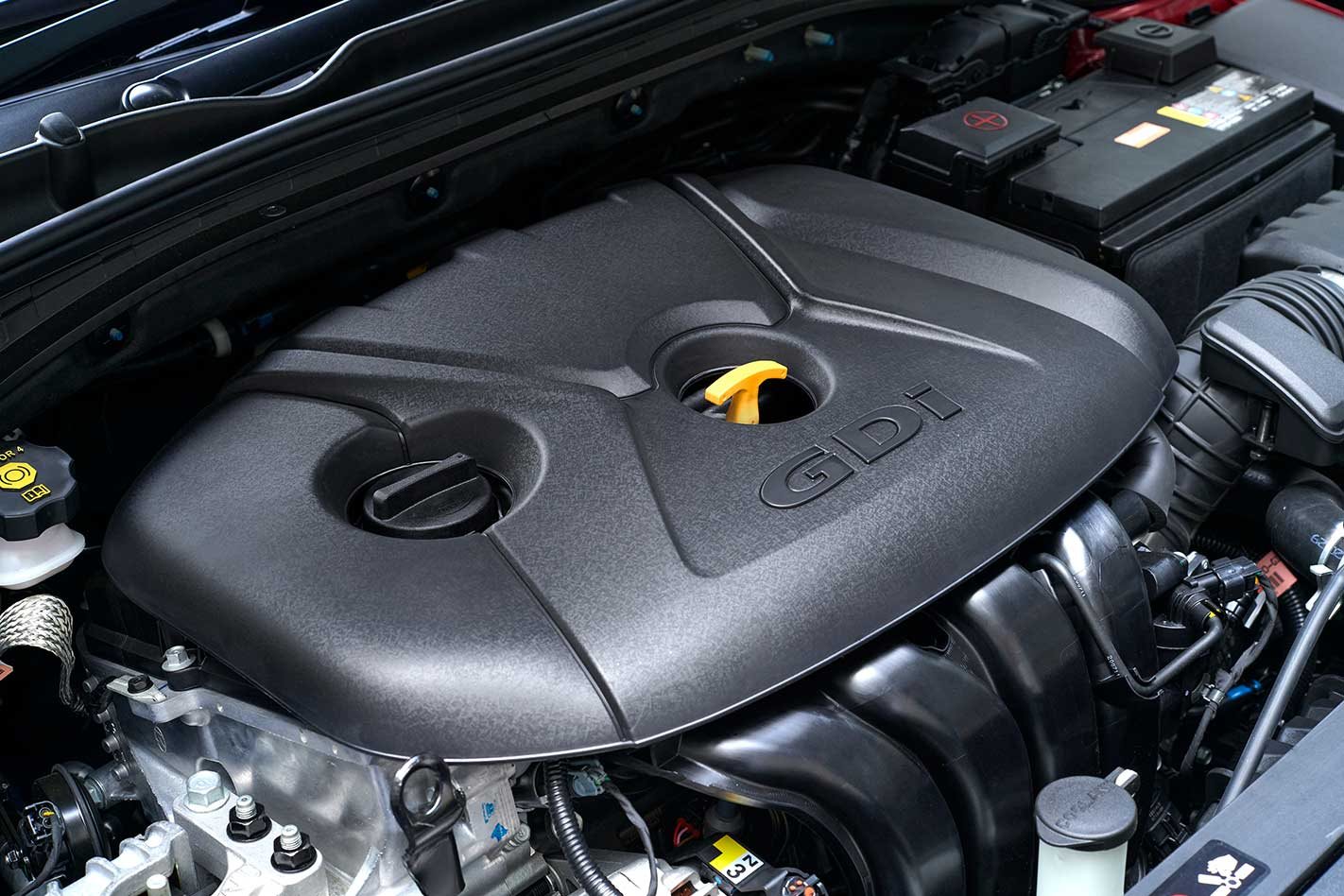 It’s not a huge penalty as the 2.0-litre is a reliable, dependable unit with adequate power and respectable real-world economy. Despite making peak torque – essentially the pulling power of the engine – at a relatively high 4700rpm there’s enough grunt that you don’t have to be constantly using lots of throttle and revs to make decent progress.

Fuel use will certainly be higher than some competitors, especially when compared to Toyota’s parsimonious hybrid Corolla, but the i30’s 7.4L/100km claimed combined figure is achievable and matching the 5.9L/100km highway figure results in a range of almost 850km. It’s also happy with 91RON fuel and is compatible with E10.

On the road, the new i30 feels better than its predecessor, even though there is no reason for it to be so. Hyundai swears that all the suspension settings, dictated by the work of its local chassis tuning group, are unaltered, but this latest model feels easier to drive and more compliant. 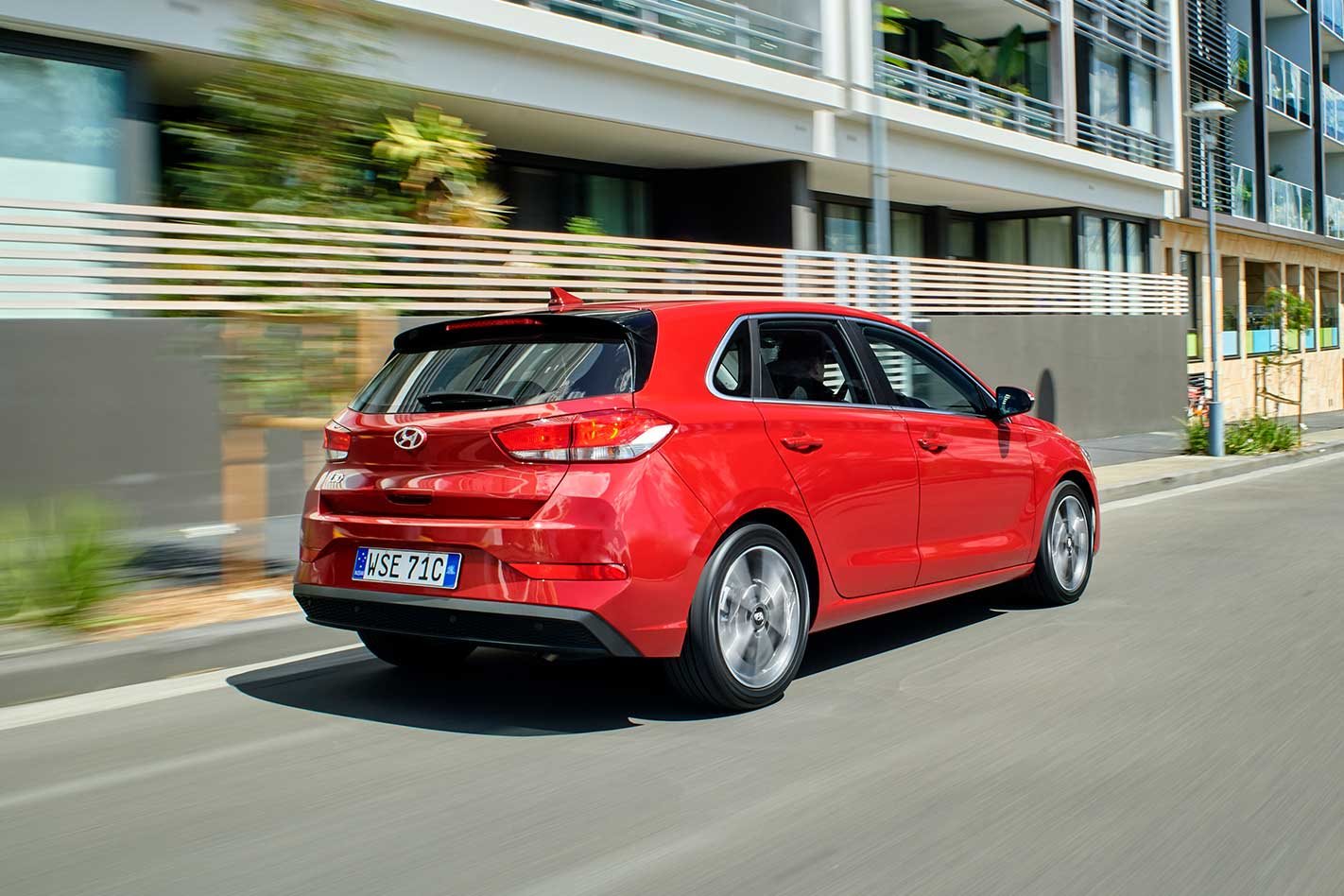 Usually it would be difficult to be so specific with the changes but in this case my wife owns a 2017 i30 Active. While an excellent machine, the weight of the steering and firmness of the brakes and suspension have always felt slightly at odds with the car’s use case – handy when driving in an enthusiastic fashion, not so much on a daily basis.

Driving on the same roads, this latest i30 felt more comfortable and smoother to drive, however, it must be a placebo! If you do find yourself on a twisty road even Hyundai’s most humble hatch still has the ability to entertain, with solid fundamentals like decent balance and accurate steering, though the Kumho tyres aren’t designed for such shenanigans.

If you’re a keen driver, a stretch to the sporty N-Line is worth the extra as it uses better Michelin tyres as well as a multi-link rear suspension setup rather than the more basic torsion beam found in regular i30s. 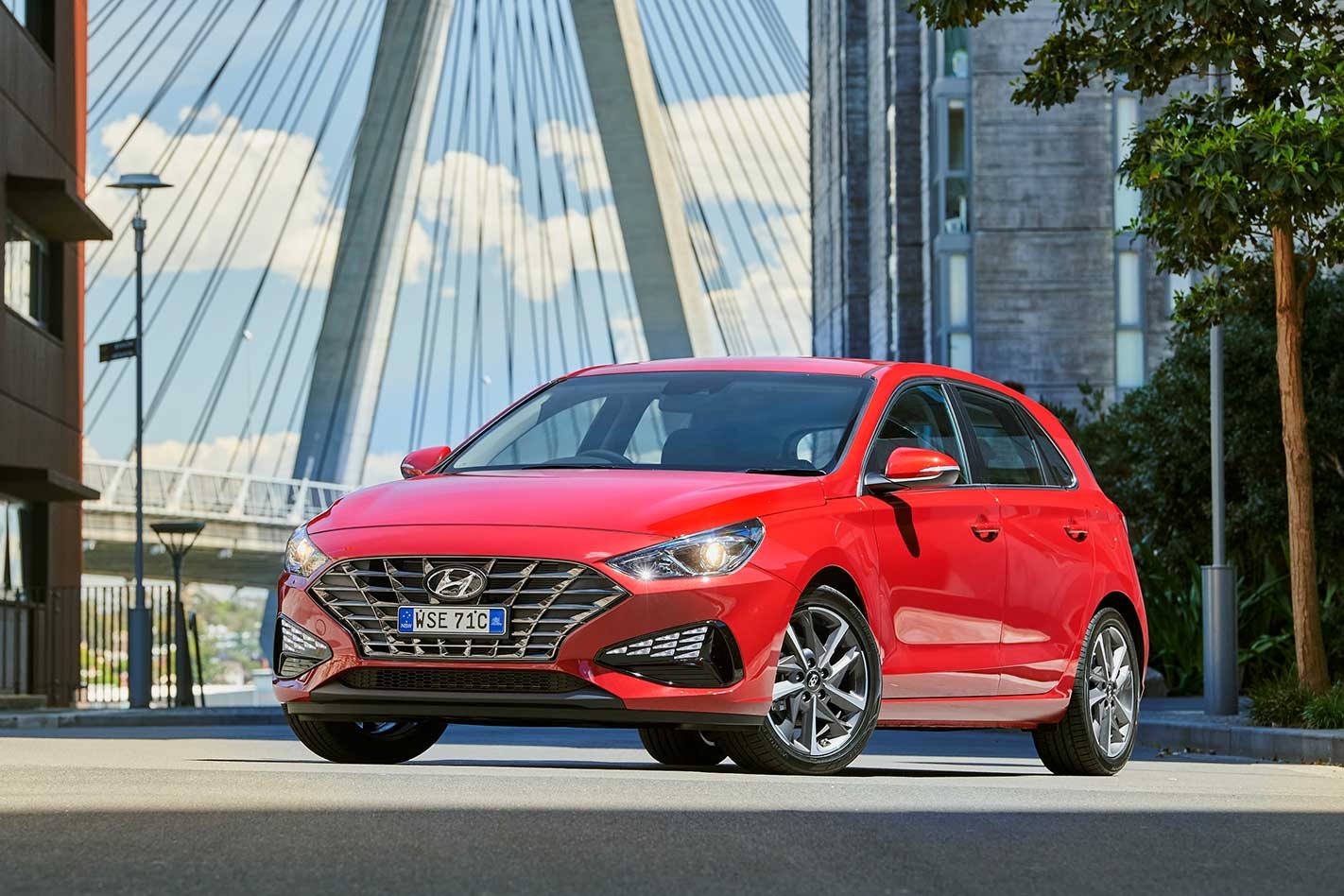 All in all, though, Hyundai has done a great job with the i30 update. It remains a sensible transportation choice that drives well, has plenty of space, reasonably-priced servicing and a solid warranty.

However, it now has a touch of surprise-and-delight to it, too, with greater design flair, improved interior material quality, more equipment and added safety.

Hyundai might have been playing a high stakes game but it’s played it well and come out smiling. 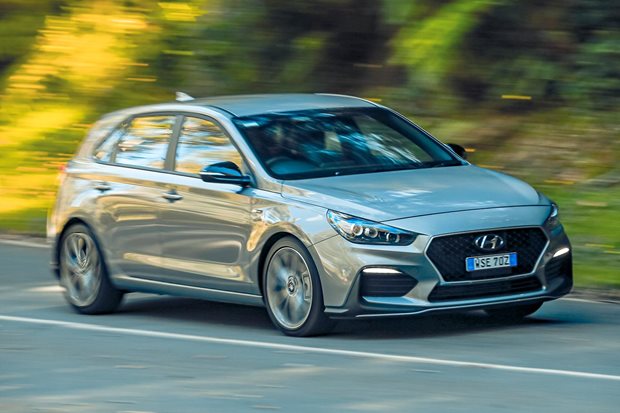 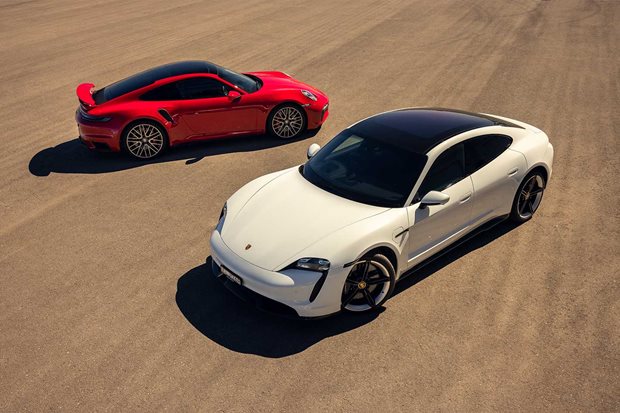