The BMW X5 xDrive40e is a plug-in hybrid, meaning it has a battery pack under the boot floor to power an electric motor that works in tandem with a conventional petrol engine under the bonnet. The battery pack is recharged in around five hours when plugged into a standard domestic socket, or more quickly (2.5 hours) via a special wall box installed in your garage by an electrician.

The xDrive40e aims to reduce petrol consumption and emissions by using the electric motor when it’s most efficient; namely in around-town driving.

2. When the petrol engine does cut in to help the electric motor, or when charge is low (or exhausted), it’s completely seamless. At suburban speeds, you are barely aware it’s happening.

3. A menu of three driving modes allows you to best choose the combination of petrol/electric propulsion. You can leave it to the car to juggle between the two, or demand electric only, or petrol only (so you can preserve the battery charge for when later entering a city, for example).

4. If you’re still driving once the battery is depleted, the car will start to recharge it using energy harvested via the braking process, or you can direct the petrol engine to act as a recharging generator.

1. The real-word electric range is only around 25km, so not far. Depending on traffic and speed limits, that may only be 35 minutes or so driving time. So once the charge is gone, and before the ‘re-gen’ function’ can start to add charge back, you will be burning fuel at the rate of at least 10 litres per 100 km around town.

2. Regular petrol or diesel X5 models can be optioned with a third-row seat which turns the car into a seven-seater. Around two out of every three X5 buyers choose this option. Unfortunately the battery pack located under the xDrive40e’s boot precludes this seven-seater option.

3. The battery pack also sees the deletion of the skinny space-saver spare tyre, replaced by an inflation kit and tyre sealant that only work for small punctures caused by nails or similar. A more serious flat in a remote area could see you stranded until a recovery truck arrives.

4. If you regularly drive sizable distances in one hit, the xDrive40e will be less economical overall than the comparably priced xDrive30d diesel model.

5. If you park on the street each night, you face issues of cable trip hazards, vandals unplugging you, etc, probably making the xDrive40e unviable. 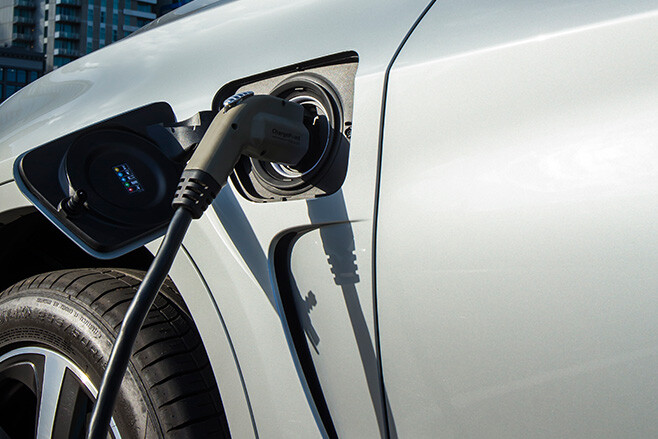 Yes, all of BMW’s German rivals – Mercedes Benz, Audi, and Porsche – do or will (later this year) offer comparable plug-in hybrid models. The Mercedes-Benz model is called the GLE 500e and it’s due here in the third quarter of this year. It teams an electric motor with a six-cylinder twin-turbo petrol engine, and will be more expensive, at around $140K.

Audi’s competitor, called the Audi Q7 e-tron, will also be more expensive, (like the Merc, around $140K) but uses a 3.0-litre turbo-diesel engine mated to an electric motor. It can travel around double the BMW’s distance in electric-only mode.

Finally, there’s the Porsche Cayenne S e-Hybrid, which is also around  $140K, has a short electric-only range like the BMW, and becomes thirsty when relying solely on its supercharged 3.0-litre petrol V6 engine.