JUST like Hansel in Zoolander, SUVs are so hot right now. This year, they’ve galloped past traditional passenger cars in terms of sheer sales numbers, and the trend doesn’t look likely to reverse itself.

Of all the SUVs, the Mazda CX-5 is the reigning king of the (not too difficult to climb, as it’s only a pretend off-roader) mountain. That sales peak may grow slightly taller, too; the CX-5 has just evolved into a new form that answers a lot of the problems of the old one.

Scrapping at its heels are the pick of the mid-size SUV litter, including the old-is-new-again Ford Escape (it used to be called the Ford Kuga), Korean upstart Kia Sportage, Subaru’s nature-loving Forester, and the Teutonic Volkswagen Tiguan.

Here, we’re looking at mostly front-wheel-drive versions of the SUV (the Forester has all-wheel-drive as standard) priced in the low- to mid-$30,000 bracket – not quite entry level, but packaged with enough of the creature comforts we’d need to make living with them a pleasant experience.

Ford Escape Trend
If you’d bought this car last year it would have worn a Kuga badge. But a change of name to align the car with its more widespread moniker has also allowed Ford to give the car a mid-life spritz, including a more conservative – read that as slightly boring – styling package.

But the $32,990 Escape is very much a driver’s car. Getting settled behind the wheel is easy, the seat is supportive and the layout of the instruments is classy and practical. It’s the same level of comfort as in the back seat, where a higher seating position in supportive pews gives a good view of the road ahead. 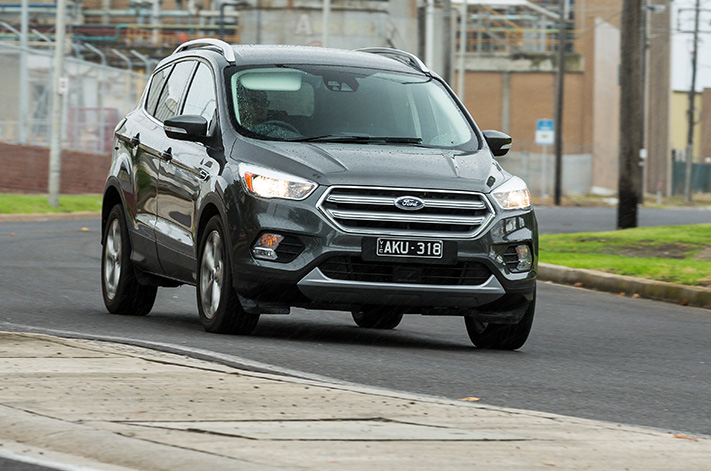 Throughout, there’s a generous level of kit, including a digital speedo, Ford’s latest-generation Sync voice control (that works really well), a capless refuelling system, and one of the best luggage compartment covers in the business.

Don’t be fooled by the Escape’s engine, a tiny 1.5-litre turbocharged four-cylinder producing 134kW/240Nm – big numbers for this class of vehicle. It’s punchy, and combined with the six-speed automatic (the steering wheel has paddle shifters allowing manual control) the Ford accelerates briskly, yet doesn’t drink that much fuel. 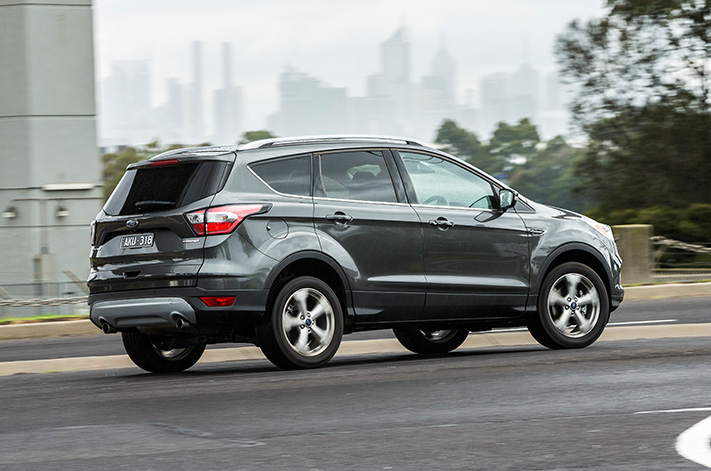 The ride on the Escape’s 18-inch alloy wheels is among the best of these cars, although it does feel a bit firm when it first encounters a bump. Road noise is reasonably well contained, too.

Criticisms? The car’s multilayered centre stack looks likes Darth Vader’s helmet, and the tall gear lever looks silly in contrast with the rest of the interior’s proportions. The front passenger seat has no height adjustment, which means those in the jump seat feel as though they’re perched on, not in, the Escape. 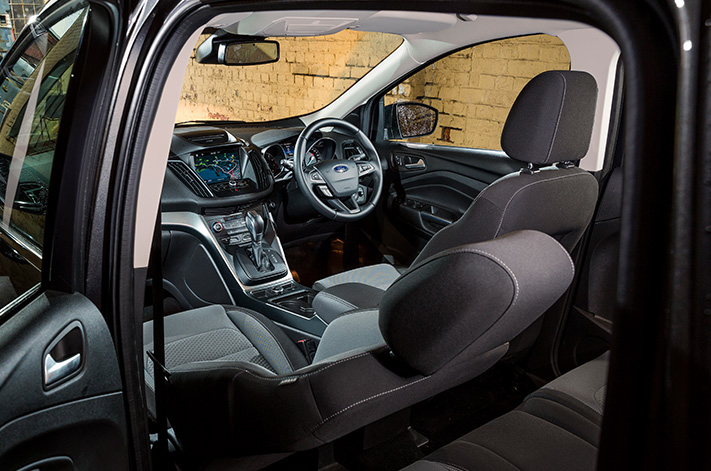 Kia Sportage SLi
It may have Korean car-making giant Hyundai as its owner and the Hyundai Tucson as a showroom rival, but the Kia Sportage is different enough to stand slightly higher in our regard to be worthy of inclusion here.

The $34,690 Sportage’s exterior has more Euro influence than the US-led Tucson, so it’s a lot more appealing to look at. It carries over inside too, where the Sportage eschews conservatism for an edgy, premium feel. 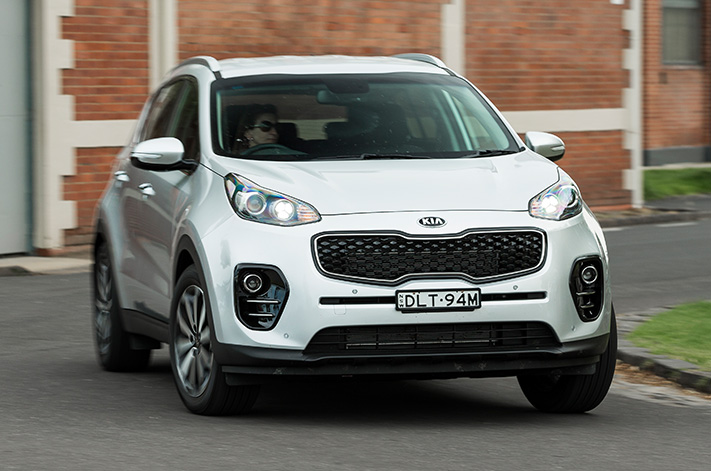 The interior of the Sportage is probably the best here to sit in every day if all seats are occupied. The front seats are comfy and the driver’s adjusts electrically, and the design of the instrument cluster and layout of the dash are useful and inviting.

That likeability extends to the rear seat. The Sportage’s rear doors are more wing-shaped than the other cars here, meaning you don’t have to bend your head around a pillar when getting in and out of the roomy back seats. All the extra glass this yields also makes the rear seat a bright, airy space. And then there are the rear air vents and a USB port that add even more rear-seat versatility. 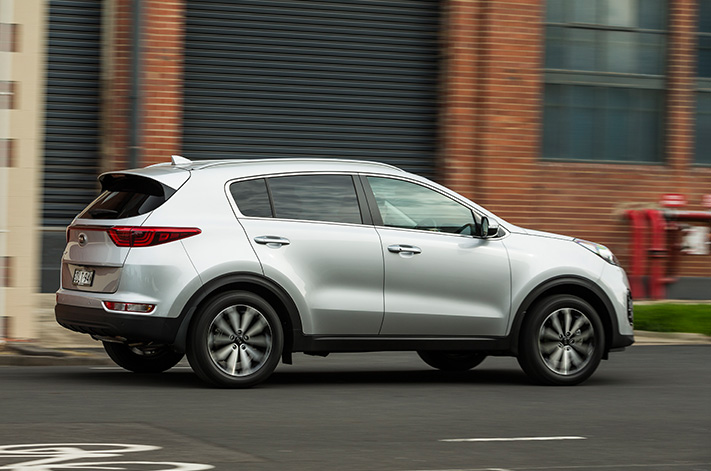 The ride quality of the Sportage isn’t as refined as the Ford Escape, but it does have a sense of playfulness when pushed enthusiastically. The SUV will lean on its rear wheels when pushed through a corner, demonstrating good poise balance.

However, there are problems. The first is a trigger-happy electronic stability control system that calls in the fun police way too early when you try and enjoy the Sportage’s balanced handling. The slightly lumpy ride could be better too.

The second is the engine. While the Hyundai-badged Tucson is built in Europe and gets a smooth and efficient 121kW/203Nm direct fuel-injected 2.0-litre engine, the Korea-sourced Sportage sticks with the old 114kW/192Nm multi-point fuel injection tech that makes it coarser the higher the revs rise, and significantly less fuel-efficient. 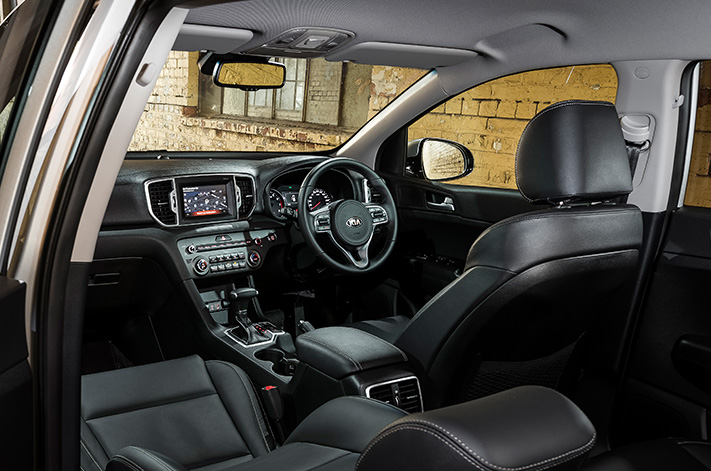 Mazda CX-5 Maxx Sport
The $34,690 CX-5 is the newest of this litter. We’ve expected big things; its bigger brother, the 2017 Wheels Car of the Year-winning Mazda CX-9, shows what the Japanese carmaker can do when it sets its mind to the task.

Which it has with the CX-5. One of the first-generation car’s biggest problems was an interior that seemed to channel every bit of road noise possible into the cabin. This new CX-5 weighs more thanks to much better sound-deadening that really only catches up with the pack, and doesn’t leave it behind. 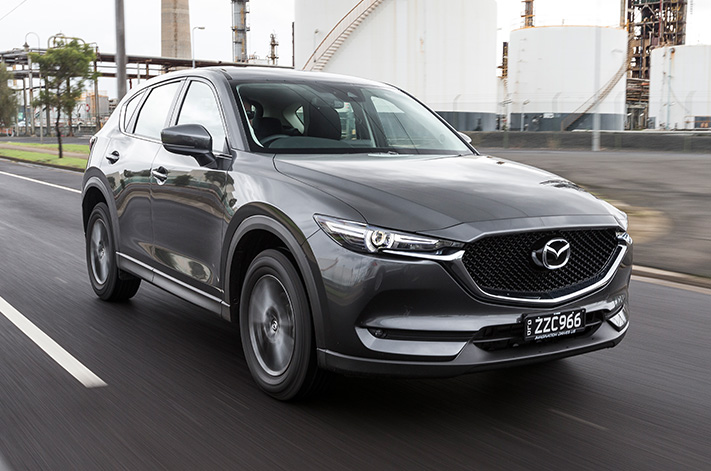 Behind the wheel, the CX-5’s interior looks a cut above the rest, helped by a high-set multimedia screen that stands tall from the dash, and plenty of soft-touch stitched surfaces. The only obvious omission is a digital speedo.

Both the comfy front seats gain height adjustment – the CX-5 is one of only two cars here to feature this – and down the back there are two USB ports tucked into the centre armrest that lose all their teen-attracting advantage when all three seats are occupied. 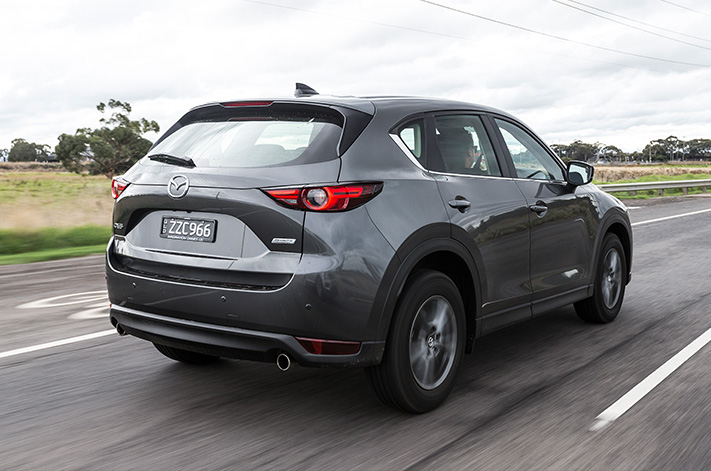 On the road, the 114kW/200Nm 2.0-litre four-cylinder engine feels just a little underpowered, with the six-speed automatic transmission hunting around on hills to find the best balance of performance and fuel economy.

The ride could use a bit more work, though. The CX-5 struggles to smooth over low-frequency bumps, which on longer trips could become a bit tiresome. However, drive it with a bit of enthusiasm and all those concerns fall to the side as it delivers a dynamic experience close to that of the Ford Escape. 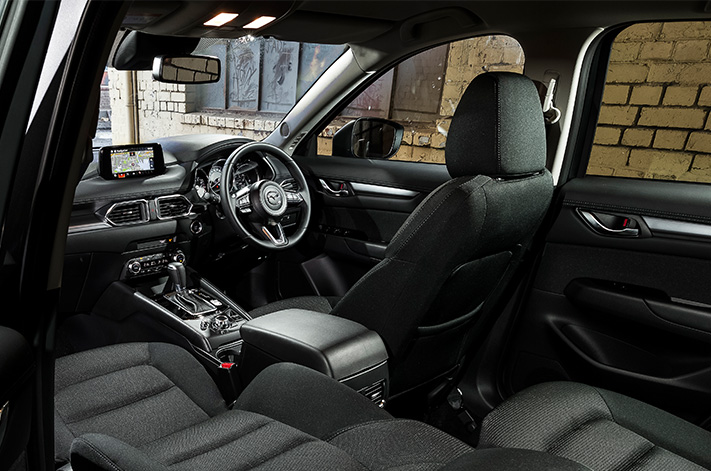 Volkswagen Tiguan 110 TSI Trendline
Three words sum up VW’s mid-size SUV: Fast, roomy and frugal. Right from the outset the $34,990 Tiguan has a lot going for it.

You need to weigh that cost against what it has, though. It’s the only car here to feature a second-row bench that slides to either increase rear-seat legroom for passengers, or increase cargo space in the boot. It’s the only one to feature an infinity-adjust driver’s seatback (the other all use a ratchet); the multimedia screen recognises when a finger hovers near it, popping up menu functions even before it is touched; and the frameless rear vision mirror adds a premium air to a functional, crisp interior. Door bins are lined with sound-absorbing cloth, and the passenger seat adjusts for height. 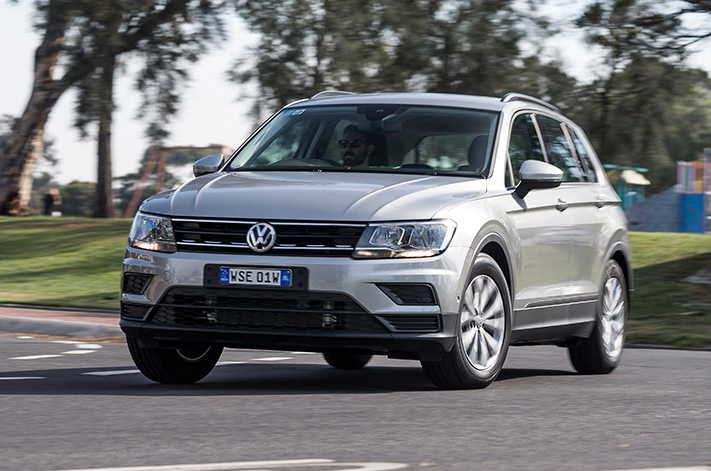 It will brake itself to avoid a crash, front parking sensors guard the plain-looking nose from scrapes, it can monitor the driver for fatigue, an electric parking brake and a host of other things the others here can’t come close to matching as a package. But strangely, the Tiguan misses out on a centre rear armrest and seatback pockets.

Under the bonnet is a frugal yet peppy 110kW/250Nm 1.4-litre turbocharged four-cylinder engine that has an enjoyable turbo whoosh to it. It matches up with a seven-speed dual-clutch automatic transmission that, in the usual VW way, is snatchy and grumbly at low speeds – such as when you’re trying to back into a car park. 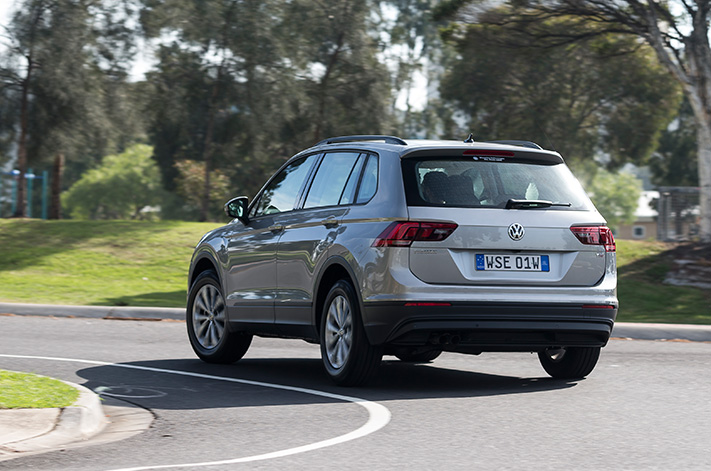 On song, the engine matches the Volkswagen’s great driveability. Combined with poised handling and cornering confidence, it’s the easiest one to drive with enthusiasm.

But notice there’s nothing about the Tiguan’s ride in that three-word set? That’s because the on-road manners are upset by a ride that’s too stiff-legged to be comfortable at any speed. The underbody stiffness translates to plenty of road noise making its way from the hard-pumped tyres – the Tiguan runs very high pressures in the rear – into the cabin. It takes the edge off what would otherwise be a winning combination. 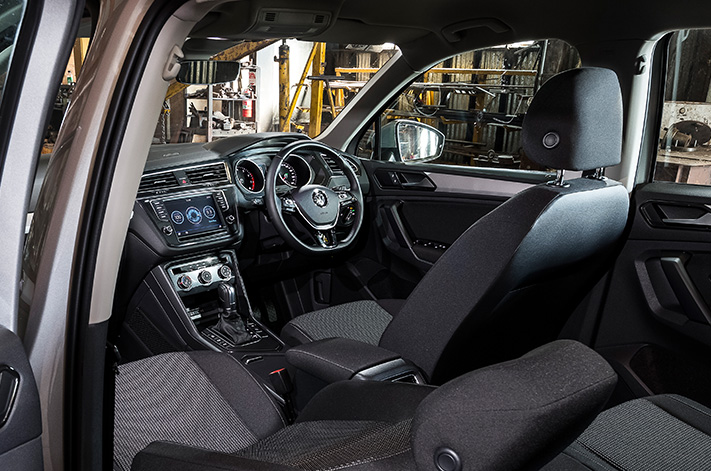 Subaru Forester 2.5i-L
Remember when SUVs were justx station wagons on stilts? It comes as something of a surprise, then, that the $33,240 Subaru Forester 2.5-L that eschews the high-riding hatchback set for some old-school two-box design values can count itself among this lot.

What sets it apart, though, is its best-in-class ride. Smooth, absorbent and insulating, it just wafts along even the roughest road surfaces, cosseting those inside. Despite the plush ride, there’s none of that sense of carsickness-inducing floatiness. 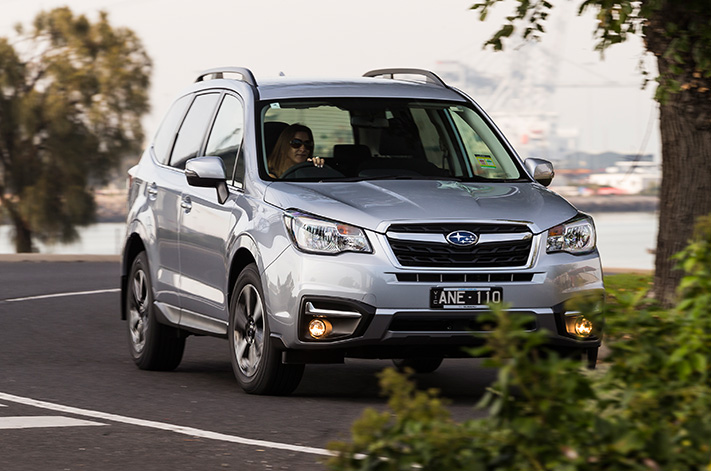 It’s also the airiest of the cars here. A low beltline and a high roof combine to provide the cabin with acres of deep glass, making the interior akin to something like a fishbowl compared with the other cars here.

The Subaru’s engine and gearbox are unique among this company. The Forester uses a 126kW/235Nm 2.5-litre flat four engine with the cylinders parallel with the floor, mated to a continuously variable transmission. That transmission allows the engine to sit in either its most powerful, or economical, rev range while accelerating or cruising. 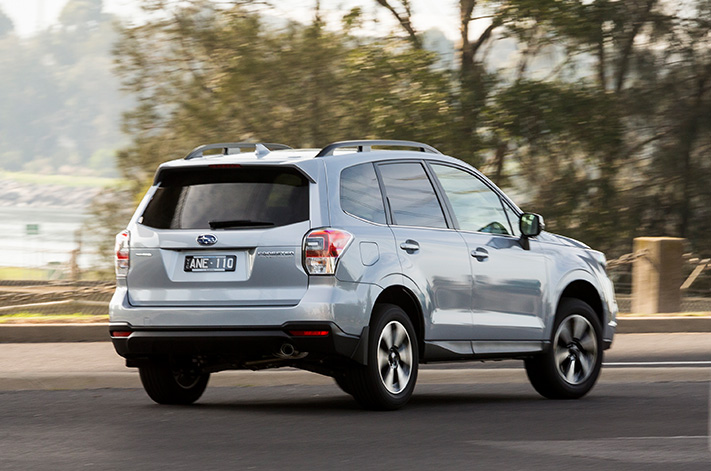 It’s a combination that works well, with the Forester accelerating briskly even if the steady drone of the engine can become a bit annoying if you’re jumping from rest to freeway speeds. Combined with the plush ride, the Forester makes for a comfortable long-legged cruiser for all the family, though.

However, the Forester’s interior leaves a bit to be desired. Surfaces are mostly hard, although the Japanese carmaker has tried to remove some of the hard contact points using softer material. And the interior design, too, fails to match up with a field that has moved on a long way – especially that cruddy multimedia head unit.

VERDICT
It’s important to note that none of these high-riding SUVs do anything better than a conventional passenger car. In reality, they do a worse job via higher centres of gravity, the weight of all the extra metal they carry and the extra bulk they introduce to the driveway or garage.

But some do better than the SUVs they’re compared with. The Ford Escape drives well but doesn’t look after anyone well but the driver. The Sportage gains big ticks for looking after rear-seat passengers, but is let down by a lack of refinement. The Tiguan surprises and delights, but who can live with that ride every day? And the Forester floats across the road, but lacks in-cabin comfort and appeal.

Which leaves us with the Mazda CX-5. It’s by no means a standout in this crowd, but it blends bits of the best elements of the others to deliver an all-round ability that combines a pleasant, livable interior, an engaging drive, steady on-road dynamics, and a few surprises along the way.

But more competition is on the way. An all-new Honda CR-V is due on sale in Australia in July; in October Holden’s replacement for the Korean-sourced Captiva, the Canadian-built Equinox lands; and Peugeot’s more SUV-styled 3008 due sometime this year should challenge VW’s premium standing.

Given the looming fight, the Mazda CX-5 now has everything to lose – admittedly from a very well-rounded base.