Expand Section
Based on the tried and proven Commodore sedan, the Holden Ute is easy to drive, performs well, and can cart around mountain bikes, large dogs, jet-skis and pretty much anything else. SS models use the same, 6.2-litre, V8 engine as V8 Commodores.

Expand Section
Friends asking you to help them move house.

Expand Section
There’s only one body style in the Commodore Ute, and that’s the classic two-door cabin with the tray out back. With an aftermarket hard tonneau (sort of a fibreglass roof for the tray area) or a canopy (the same thing but higher), you can make the vehicle more secure but potentially less versatile when it comes to bulky loads.

The Commodore Ute is rear-wheel drive. It is classified as a light commercial vehicle.

What features do all Holden Utes have?

Expand Section
Cruise control, a reversing camera, and steering-wheel controls for the audio and info systems.

Headlamps that switch themselves on when it gets dark. Dual-zone air-conditioning, which allows the driver and passenger to set temperatures independently.

Front and rear parking sensors, and a park-assist system that steers the car into a parking spot while the driver handles the engine and brakes.

Six air-bags: two directly in front of the driver and passenger, one outside each front occupant to protect the upper body, and side-curtain airbags for both to protect the head.

Electronic stability control, which helps prevent skidding. (This is not mandatory on commercial vehicles, and so some alternative utes don’t have it.)

The least costly model, the Ute, comes standard with a tyre repair kit but no spare; however you can option either a full-sized spare or a space saver. The SV6, SS and SS-V come with space-saver spares, while the SS-V Redline relies on just a repair kit.

Satellite navigation and a DVD player are available as options on the Ute, SV6 and SS.

All Commodore Utes have a three-year/100,000km factory warranty.

Expand Section
A mid-sized petrol V6 is the basic engine in the Commodore Ute. It’s lifted straight from the Commodore sedan, and has an official combined (urban and highway) fuel consumption figure of 9.0 litres/100km in all variants.

This is the most fuel efficient engine, but if you use the Ute for towing heavy loads, you might find it struggles up hills and at highway speeds.

That’s where the enormous V8 of the SS, SS-V and SS-V Redline comes into its own. Yes, this 6.2-litre engine will guzzle plenty of fuel (especially around the suburbs), but it has lots of muscle for towing or just accelerating from the traffic lights.

The least costly model, the Ute, is fitted only with a six-speed automatic, while the other models have the option of that gearbox or a six-speed manual.

Expand Section
The Ute rolls on 16-inch wheels made of steel. Move up to the SV6 and you get 18-inch alloy wheels, with wider tyres of a lower profile that improve steering and grip. The suspension is firmed up, to promote flatter cornering. A body kit distances it visually from a council vehicle.

Inside, there’s a leather-clad steering wheel and gear-shifter, and a soft tonneau is included.

The SV6 (and every model above it) also gets blind-spot monitoring, which can warn the driver if there’s a car in the lane next to them, and a reversing alert, warning that a car could be crossing behind. Manual gearbox versions come with a limited-slip differential, which improves drive on slippery surfaces.

The SS is the first variant to get the V8 engine. That’s pretty much where the extra money goes there, except that from here on up the autos too get a limited-slip diff. The SS-V and SS-V Redline gain bigger, 19-inch wheels with tyres slightly lower in profile, along with satellite navigation and a DVD player.

The range-topping SS-V Redline model also gets a forward collision alert, to warn the driver that a nose-to-tail crash could be about the happen, and a head-up display, which projects a speedo on to the car’s windscreen, within the driver’s line of vision. The Redline also has a lane departure warning, which alerts the driver when the vehicle strays out of its lane on the road.

The Redline is the only model to get extra-wide tyres at the rear, a high-performance braking package and rain-sensing wipers.

Expand Section
The bigger tyres of the SV6, SS and SS-V variants will cost more to replace, and will wear out faster as well. These will also ride a little more roughly than the Ute on its more cushioning rubber.

The bigger brakes of the SS-V Redline model use very expensive brake pads and these are a normal wear item.

How comfortable is the Holden Ute?

Expand Section
This is where car-based utilities have truck-based competition such as the Toyota HiLux, Nissan Navara and others licked.

Simply, things like the Commodore Ute are as easy to drive as a conventional sedan (on which they’re based, after all), and with passenger-car suspension they are also much nicer to ride in.

The Holden Ute’s cabin is pretty plain in base-model format but even so, it seems well put together.

The more upmarket versions start to get busy looking inside and there seems to be a lot of different materials and surfaces.

The seats are comfy for long periods, although the base-model gets cloth and less bolstering and support than the more expensive models. That said, the cheaper seats are also easier to get in and out of if you were using the vehicle for, say, deliveries.

The Ute is a little noisier inside than a Commodore sedan, but it’s still quite civilised even at highway speeds.

What about safety in a Holden Ute?

Expand Section
Despite the range of models and their various price-points, the Commodore Ute has similar safety gear across each version. It’s how the whole range has achieved a five-star safety rating in Australasian New Car Assessment Program (ANCAP) testing.

On the Which Car safety scale, all Ute models except the top-shelf SS-V Redline score in the Excellent range, elevated by the standard stability control and reversing camera. The Redline does even better, with features such as its forward collision alert and head-up speedo pushing it into Standout.

The major primary safety issue is with the thick windscreen pillars, which make seeing through intersections difficult.

Expand Section
Yes, mainly because the Ute doesn’t drive like a truck; it’s definitely more car-like in terms of the way it accelerates, corners and rides.

Both engines offer plenty of overtaking urge and they’ll happily cruise all day at freeway speeds.

Opt for the V8 and you’re suddenly in the realm of even more acceleration and a luscious V8 soundtrack from the exhaust system. Many will love that distinctive roar – a sound that Holden has ingeniously enhanced inside the cabin – but those looking for a relaxed, refined ride may be put off by the bellowing and burbling.

The SS-V Redline also gets a more serious set of brakes than the other models, so it’s an all-round performance car in every respect. Many owners take them to race-tracks for weekend thrills.

Expand Section
There is, of course, no rear seat in a utility like this one. That also limits its suitability for child restraints.

As for accommodation beyond the front seats, you’d best ask a dog.

Expand Section
Brilliant. This is why the Holden Ute exists, really.

For moving heavy or bulky loads, a vehicle like this really takes some beating.

All Utes get a plastic tray-liner, which means the metal the car is made from won’t be scratched and dented by the loads you carry.

The downside is a relative lack of security for those loads, with only a soft cover supplied by Holden (and even that’s missing from the base-model).

Towing is another of the Ute’s fortes, and with the Holden-approved towing package, the Ute can haul towed loads of up to 1600kg (a decent-sized boat, or a horse float with one horse on board).

All Utes get Trailer Sway Control, which monitors the trailer’s behaviour and applies the car’s brakes to control any sideways motion from the towed load. Hopefully.

Where is the Holden Ute made?

Expand Section
All Holden Utes are made in Australia.

Expand Section
Truck-based utes can carry much heavier loads. Apart from that, about the only thing the Holden Ute can’t offer that some utes can is four-wheel drive and extra ground clearance.

But it’s not designed as an off-road vehicle, so that’s hardly a criticism.

The other car a Commodore Ute shopper should short-list is the Ford Falcon Ute.

It’s broadly the same concept but thanks to its more rugged rear suspension, it can – with the appropriate Ford-approved package – tow more than the Holden.

Expand Section
The SV6 emerges as our pick of the bunch. In its latest guise, Holden has finally made the V6 engine as civilised as it always should have, and for just a little more money it steps away visually from the work-truck look.

But if you’re a keener driver and can afford the fuel, then the seismic grunt of the V8 is hard to resist.

Are there plans to update the Holden Ute soon?

Expand Section
Thanks to the imminent death of the Australian car industry, this is the last Holden Ute we’ll ever see.

There was a small facelift in October 2015, which added ducting to the front bodywork and brought a slightly bigger and more powerful V8 engine with enhanced sound production. 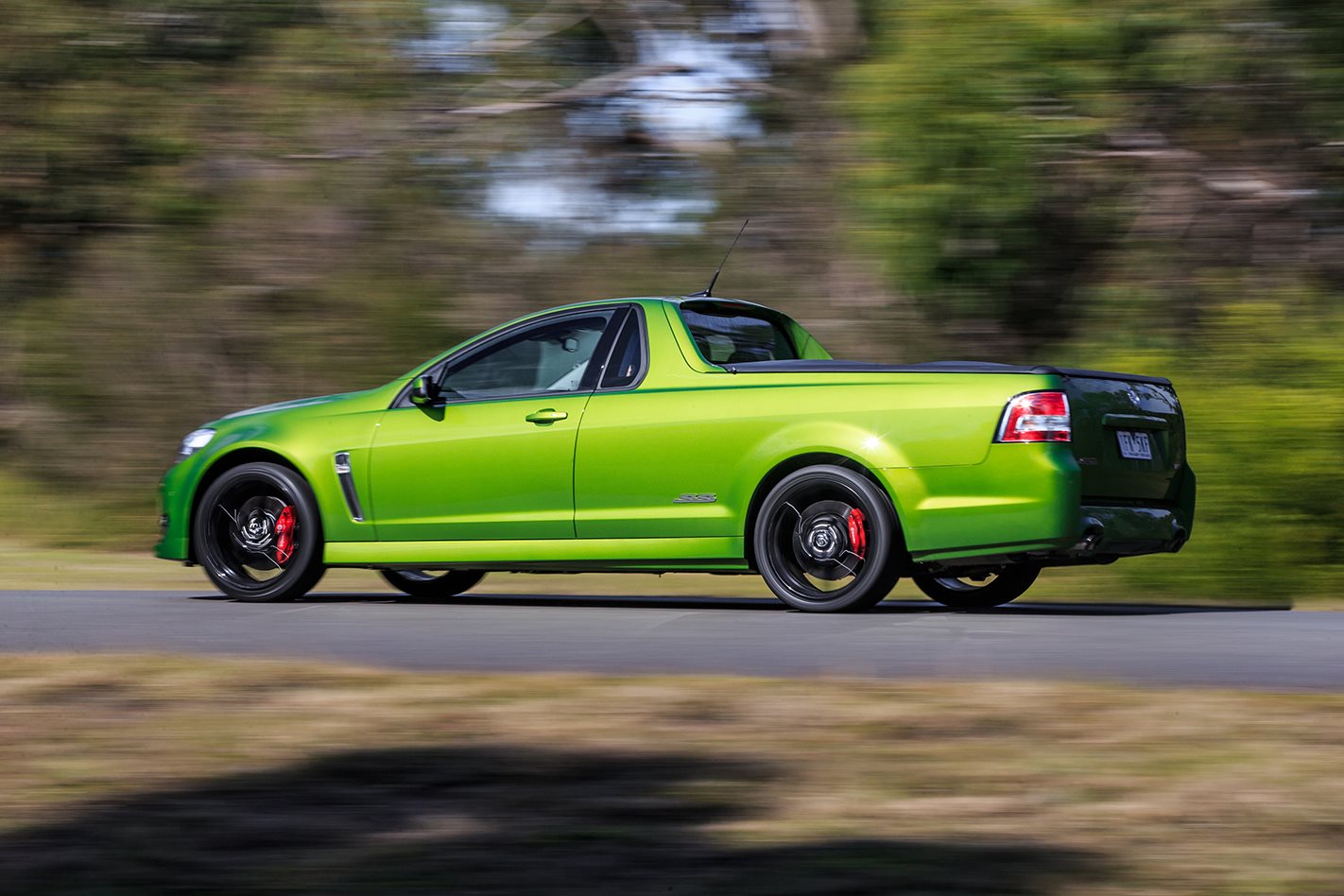 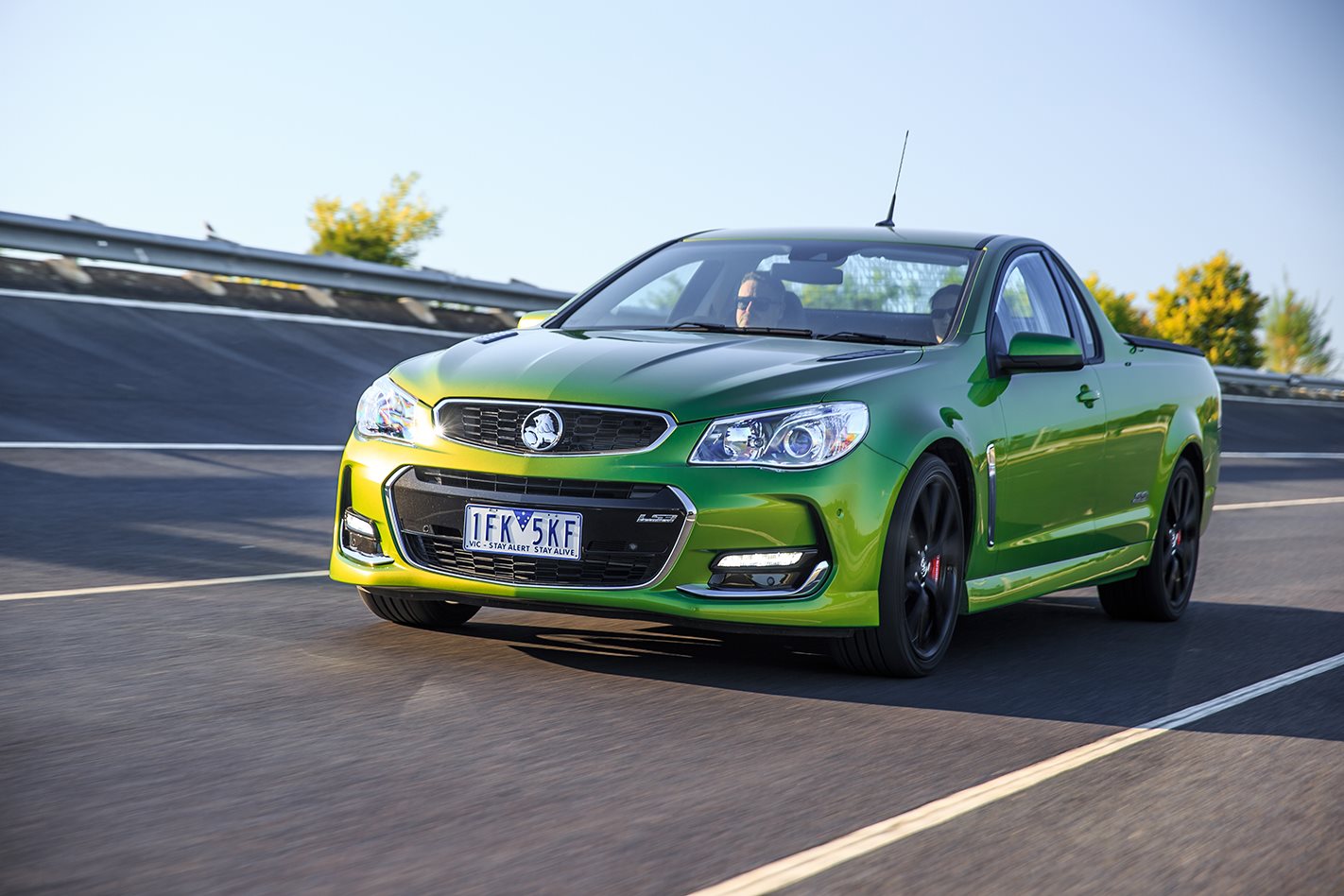