We all know by now that the internet comments, generally speaking, is not the healthiest place to reside. But when it comes to opinions around the Lexus RC F Track Edition, I’m afraid that many of the keyboard warriors have a point.

From the fair 'this is what the Supra should have been',  to the brutal 'thank god BMW had nothing to do with this', 'Toyota and Yamaha partnership > BMW and Toyota' (referring to the engine tuning collab that dates back to the early development of the 2000GT in the late 1960s) to my personal favourite:  'The RC-F looks more Supra than the new Supra.' I might have to agree.

When it comes to hair-on-end enjoyment, track capability, performance and bragging rights, it is worth wondering if Toyota’s big, luxurious sibling has it in the bag with the RC F, even with an entry-level price difference of around $35k?

If the boxes you're ticking include 'livable', 'track' and 'pure', most definitely. But hey, maybe the rumoured Celica will make up for it...

After more than a decade since Lexus first created the F performance line, and almost just as long since we first laid eyes on the magnificent LFA, the RC F Track Edition attempts to keep the flame burning.

It takes the form of a naturally-aspirated, 5.0-litre V8 inspired by the legendary supercar and fitted with tried-and-tested GT3 tech, dripping in carbon fibre reinforced plastic (CFRP), stamped with a luxury pedigree and served on a platform that is a conglomerate of the GS and IS platforms.

This is Lexus’ first real attempt at a liveable track car... and for $165,690, it’s lighter, cheaper and in many ways, more capable than its German rivals. Here, we highlight four of the best points to justify its place in your (or my) garage.

The fabled LFA continues to be the pinnacle of performance and self-indulgent engineering for Lexus. Now worth over a million dollars, the V10 supercar is a rare breed, especially when you take into account that of 500 made, only 10 were ever allocated to Australia.

In fact, next time you hear someone scoff at the idea of an investment car, remind them that value of those 10 vehicles has increased at the same rate as the property market (minus the recent downturn, that is).

All this considered, it makes sense that when creating a performance car, Lexus would draw inspiration from its own icon. Much like the behaviour of the LFA’s finely tuned V10, the 5.0-litre, naturally aspirated  V8 of the RC F is also high-revving and at its most symphonic at higher speeds.

And with a 0-100km/h jump of 4.3 seconds, it is the closest any Lexus production car has gotten to the sub-4second time of the LFA. It is also the first Lexus to offer launch control since.

It has been on a diet

Following on from the above point, the RC F owes a lot of its weight loss to a diet tried and tested by its supercar cousin. Having gone through some extensive weight reductions, the revised RC F includes more carbon fibre reinforced plastic (CFRP), a lighter intake manifold made of aluminium, a smaller air conditioning compressor, aluminium upper support mounts and brackets in the suspension and hollow rear-axle shafts.

Lexus also went through its engine components with a fine-toothed comb to shed any extra kgs while also dropping the centre of gravity. All this resulted in a kerb weight loss of 15kg over the previous generation RC. 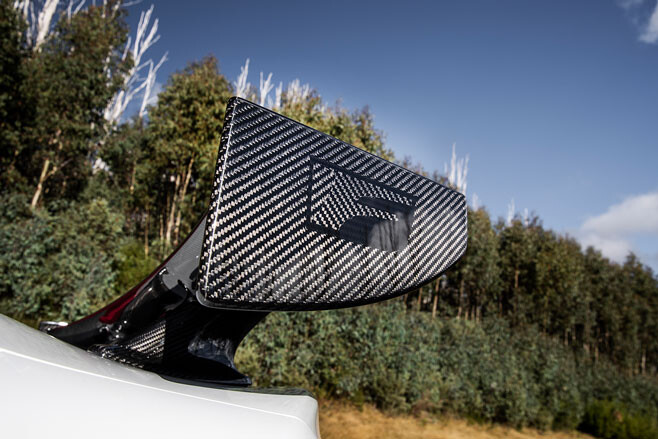 The Track Edition takes this further with Brembo brakes with carbon-ceramic rotors and 19-inch BBS alloy wheels, resulting in an overall loss of 25kg of unsprung mass.

And when you swap in a signature blue-tipped titanium exhaust, CFRP bonnet, roof, rear diffuser, side skirt and rear-seat brace, as well as the first fixed rear wing to appear on a mass-production Lexus (and what a beauty), all crafted from the same woven carbon material found in the LFA, the total reduction of weight comes to a whopping 65kg,

The end result is a kerb weight of 1715kg, 80kg lighter than the RC F before it.

Breathe if you want to go faster

“The extensive aerodynamic knowledge gained from the RC F GT500 and RC F GT3 race cars has been applied to the exterior of the new RC F," he said. “Every shape has been given function, embodying 'race-bred design'. Extraordinary effort has been placed on reducing front lift.

"As a result, even at ultra-high speeds around 250 km/h, the front feels firmly planted on the road surface."

It has made its intergalactic debut

In the spirit of fun facts, last month, the RC F’s 5.0-litre V8 made its interstellar debut as part of a celebration around the car’s cameo in Men In Black: International.

With help from the astrophysics team at Melbourne's Swinburne University of Technology, experts at decoding radio transmissions from outer space, the sound of the engine was encoded into an audio waveform and beamed into the sky from the Molonglo Observatory Synthesis Telescope (UTMOST) in the ACT.

It was, of course, aimed directly at Orion Nebula, with the message “New Lexus RC F. Earth. We've been expecting you."

Sadly, it may take a few centuries before we know what the aliens think of one of our last naturally-aspirated engines...