The Mazda CX-9 has been lauded since its launch for the ample space, comfort and standard features on offer, and for the performance of its gutsy 2.5-litre turbocharged petrol engine that hauls its 1850kg mass pretty well.

Its one weakness is the lack of a diesel offering, as available in the smaller CX-5, which has the potential to return better fuel economy on highways. While the seemingly obvious solution would be to shove an oil burner under the CX-9’s bonnet, Mazda opted instead to create a stretched version of the CX-5 with a diesel option, a car we now know as the CX-8. Created specifically for the Japanese market – where the CX-9 is not sold – the CX-8 became available in Australia in 2018.

In February 2020, Mazda introduced a 2.5-litre four-cylinder petrol engine to the CX-8 range, also sourced from the CX-5, to make it more attractive to urban buyers.

To those not in the know the CX-8 and CX-9 look very similar and perform much the same family-focused mission, albeit with different powertrains. But there are enough differences between the two to sway buyers who may not be too fussed about what’s under the bonnet one way or the other.

So let’s see how they stack up. 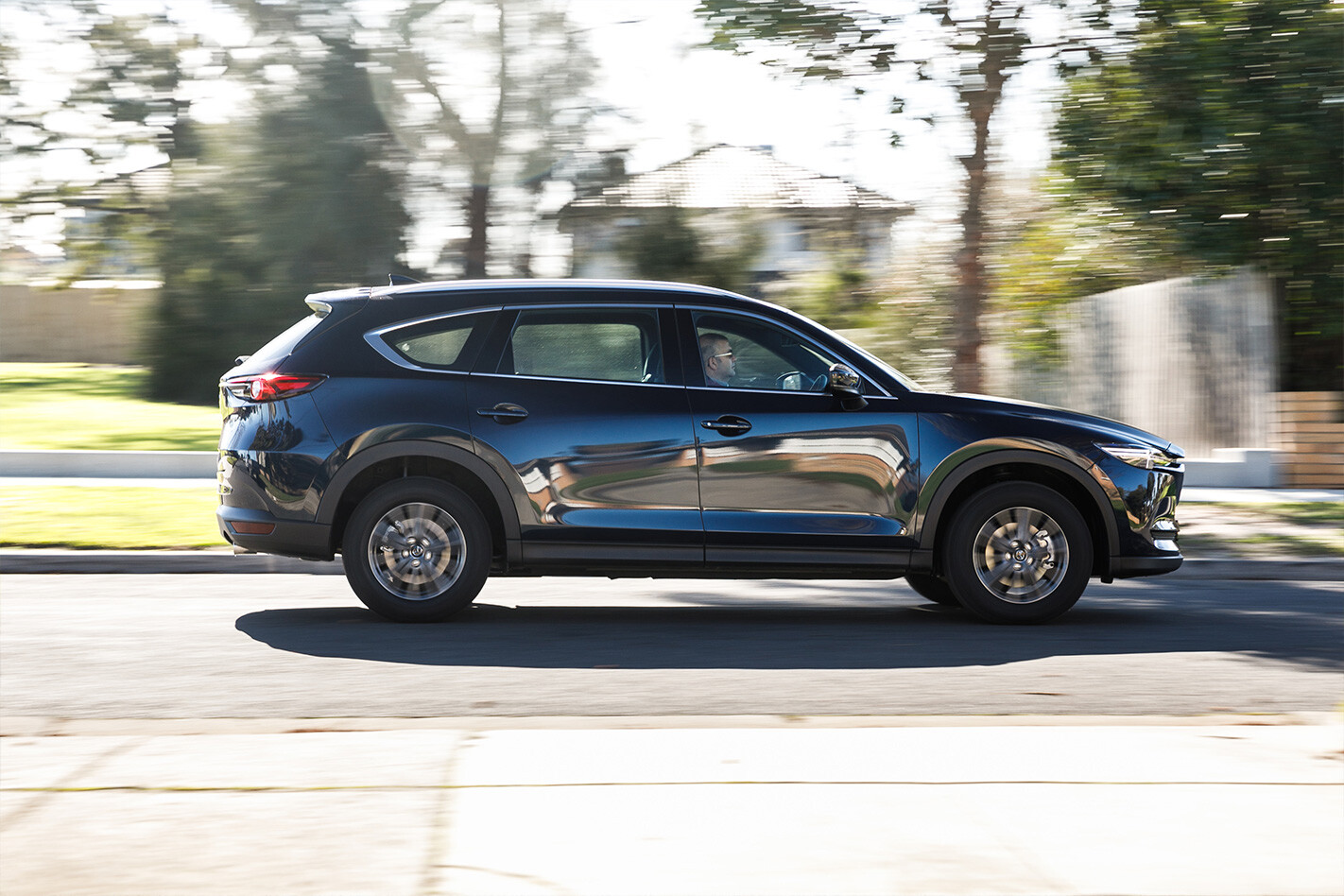 The CX-8 originally only had just two variants, Sport and Asaki, making it the smallest line-up in the Mazda stable. But this was extended with the 2020 update to also include mid-spec Touring and GT versions, which filled a huge price gap between variants.

The entry-level CX-8 Sport FWD petrol costs $6500 less than its CX-9 counterpart, though it's worth noting the CX-9 has a more advanced turbocharged 2.5-litre petrol engine with much better performance and identical fuel consumption.

Both cars’ entry-level Sport versions are very well equipped and have a premium feel despite their cloth trim. Features common to each model include:

The bigger CX-9 comes standard with 18-inch alloys, while the CX-8 Sport rolls on 17s.

The range-topping CX-9 Azami (from $64,893) and CX-8 Asaki (from $61,440) are each brimming with features that are extra-cost options in some pricier Euro SUVs such as Nappa leather upholstery, heated front seats premium sound system, remotely operated tailgate, multi-element LED headlights and 360-degree view parking monitor. The CX-9 Azami has 20-inch alloys, the CX-8 Asaki 19s.

The CX-9’s 5075mm  x 1969mm overall dimensions are 175mm longer and 129mm wider than the CX-8’s (4900mm x 1840mm) however, both have the same 2930mm wheelbase. This provides the CX-8 with the same legroom in the first two rows, but its shorter and narrower shell loses a little elbow room while making parking a little easier.

Both SUVs are very comfortable, with plenty of legroom and third rows that will accommodate adults over reasonable distances. The CX-9’s additional width gives it the edge when it comes to elbow room, particularly in the second row.

The CX-9’s front seats feel a little wider and more embracing, and second-row seats also feel more comfortable – you sit in them whereas you feel like you’re sitting on the CX-8’s.

Both cars are very quiet. The CX-8’s diesel naturally dishes out a little more engine noise, but it’s a lot quieter than the CX-5 diesel, with plenty of sound insulation that’s evident by the weight of the bonnet. They also ride very smoothly.

The CX-9’s third row provides usable accommodation for adults, rather than being a kids-only proposition, while the CX-8’s back seats are designed to accommodate occupants up to 170cm tall, which makes it a little tight for most adults. Once they squeeze in though, most people will cope with a 20-minute run across town.

Children will have no problems, with heaps of leg and elbow room in each car.

The CX-9’s second row is comfortable and delivers a good view over the front seats and out the side windows, and there’s plenty of headroom. In the Touring, GT and Azami versions, the central fold-down armrest has a handy storage bin and a USB port built in.

The second-row seats in the CX-8 can slide forward and aft, and recline 22- and 30-degrees from vertical, and the rear door opens out to 80-degrees to make getting into either row easier. All versions have a fold-down centre armrest with storage and two USB sockets. The two outboard seats in the Asaki are heated.

Neither car has third-row air vents, but their second rows have dedicated vents and independent air-conditioning controls that also benefit the rear seats.

With the third row in use, the CX-8 holds 209 litres of luggage space, which Mazda reckons is just enough to hold two golf bags. There is also a sub-boot below the main boot floor with a large opening and a depth of 100 mm, offering 33 litres of underfloor storage space, which is especially useful for valuable or fragile items.

With the third-row seatback folded down, the available luggage capacity increases to a sizeable 742 litres. Folding down both the second and third-row seatbacks brings a capacious 1727 litres and creates a flat floor space large enough to hold two bicycles. That last figure is slightly more than the CX-9 thanks to the flat-folding rear seats.

The CX-9’s additional width increases luggage space behind the third row to 230 litres. In five-seater mode that grows to a substantial 810 litres. Fold the 60/40 middle-row seats down and there’s a van-like 1641 litres of space – enough to accommodate big pieces of furniture.

The petrol engine responds strongly from low speeds and pulls with plenty of guts for overtaking. It’s a sporty engine that teams well with the six-speed automatic to give the CX-9 a surprising turn of speed.

The CX-8's naturally aspirated petrol engine has significantly less power and torque so has to work harder resulting in a slightly higher official combined fuel economy rating of 8.5L/100km - by comparison the same engine in the CX-5 consumes 7.5L/100km

The CX-8’s 2.2-litre SKYACTIV-D turbocharged diesel engine is the same as the one in the CX-5. It consumes just 6.0L/100km on the official test cycle (city and country combined).

Despite its slightly smaller dimensions, the diesel CX-8 is about 110kg heavier than the CX-9 because of the heft of its diesel powertrain and additional sound-proofing. So it drives like a heavier, slighter softer-riding CX-5, and not quite like a CX-9, though the 2.2-litre diesel has no problems pulling its bulk.

The Mazda CX-9 is the best handling large SUV available near its price, and a genuinely good drive despite its bulk and high centre of mass. Its greatest strengths are a suspension that blends comfort brilliantly with handling, and slick and accurate steering, particularly with the AWD versions.

The CX-8’s narrower footprint means it doesn’t feel quite as planted as the CX-9, but overall body control and general dynamics are good and often imperviousness to road imperfections. We're yet to drive the petrol CX-8, but the lighter engine should result in improved handling characteristics. The CX-8 is one of the easier seven-seat SUVs to park.

It will be interesting to see how the CX-8 affects CX-9 sales. They are different cars, and even though the CX-8 now has a petrol option their main point of difference is the powertrains.

A couple of things going against the CX-8 include less cargo space, fewer spec choices and the fact the diesel isn’t the best choice if most of your driving is short inner-city runs.

But on the plus side, the entry-level CX-8 Sport FWD petrol is significantly cheaper than its CX-9 equivalent, which could help attract a few more buyers.