What is it like to live with a 2015 Mercedes-Benz SL400 sports convertible? Wheels editor Glenn Butler offers insight one month in

I’ll admit there’s more than a touch of indulgence in running a Mercedes-Benz SL roadster as a long-term test car. But there has to be; that’s why people buy these luxurious two-seat sports convertibles after all.

Equally, there has to be more than just hedonism behind the SL’s astonishing longevity, which stretches back six decades to the 300SL hardtop in 1954, and the 190SL convertible that followed shortly after.

Ask me again in four months. Normally, Wheels runs long termers for six months, but Benz was only willing to loan this $240K beauty for four.

The model I’m driving is the new SL400, freshly facelifted and receiver of a mighty heart transplant in January. Continuing Benz’s modern habit of ignoring synergies between badge numerals and engine size, the SL400 has a new 3.0-litre direct-injection V6, twin-turbocharged for 245kW and 480Nm, the latter kicking hard from 1600rpm. In this turbocharged age where performance and economy co-exist, the SL400 is claimed to hit 100km/h in 5.2sec and sip just 7.3L/100km.

That last number is the combined figure, one I’ve so far failed to get anywhere near. On my vastly reduced, 2015-spec, 4km commute to work – see ya Mt Martha, it was fun – I’m averaging closer to 20L/100km. You read that right. Makes sense, though, because that 4km takes about 12 minutes and involves lots of stopping and accelerating.

With a couple of freeway runs over Christmas to collect relatives from the airport – one at a time, please, and pack light – the SL400’s trip computer reported a more tolerable 10.9L/100km, but that’s still nowhere near the official average.

All up, our first few weeks and 454km together returned a mediocre 11.9L/100km. Next month’s trip to Phillip Island will give the SL a chance to demonstrate its long-distance prowess, and hopefully bring some country balance to the so far exclusively urban economy average.

I have to take some of the blame for the SL400’s sizeable thirst. The engine is a thruster! Sounds pretty good, too. Like a deep, distant earthquake, all thrum, boom and rumble. There’s even a deliberate cackle on lift-off in Sport mode, which is nice but far too subtle for my enthusiast ears. 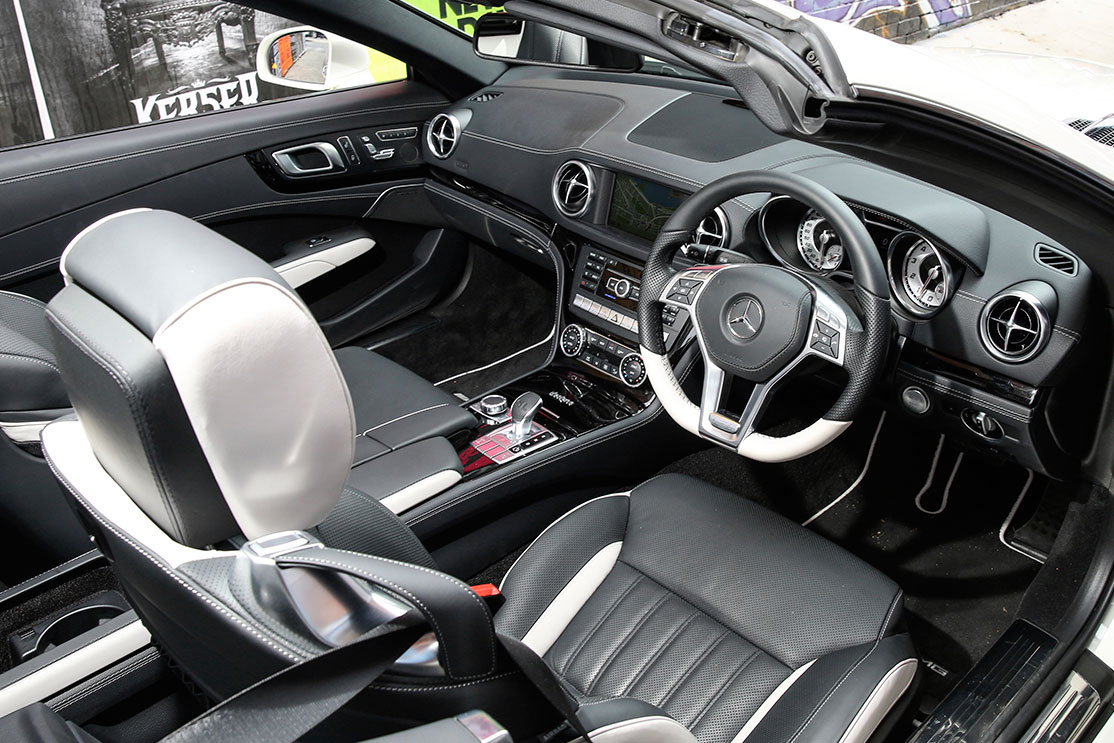 This SL400 is the ‘entry-level’ model, the first step on a price list that peaks with the awesome twin-turbocharged V12 Mercedes-AMG SL65 at $481K. The SL400’s $229,000 ask is less than half that, and while the performance gulf between the two is considerable, the visual differences are not. Seems even shoppers perusing the ‘affordable’ end of the SL range like to look the goods while whipping wind through their surgically-enhanced coiffs.

This particular test car has a little help from the $9K Designo package, which adds some AMG body touches and 19-inch alloys, plus lashings of black and white leather inside – which subtly advertises my support of the mighty Magpies AFL team to other motorists.

The SL400’s ride is good on 19s, when the road is in a good mood. There is some shudder over joins, particularly with the roof down, but it’s quickly over, and far better than previous SL generations, some of which weighed more than two tonnes. This much lighter 1655kg model feels far more solid and planted.

The steering is a pleasant surprise; it’s quick and really makes the big roadster pivot into corners, a sensation accentuated by the driver’s seat being so far back in the wheelbase. Not a massive amount of feel for the road, but it’s hard to engage with the front end while negotiating school zones and shopping centres. Roll on next month.

The biggest challenge this SL400 faces is… me. On two fronts.

First, I struggle to see the allure of convertibles, especially in a sun-drenched country like ours. Most summer days, the sun is simply too intense to subject even my well-carpeted pate to a roasting. Nevertheless, in the name of science, I’ll go topless as often as possible.

Second, personal perception. I feel like an imposter driving this quarter-million-dollar roadster around town with the roof down, especially in peak hour. Like a G-list celebrity pretending to be an A-lister.

I wonder if the SL400 will change either of those perceptions? 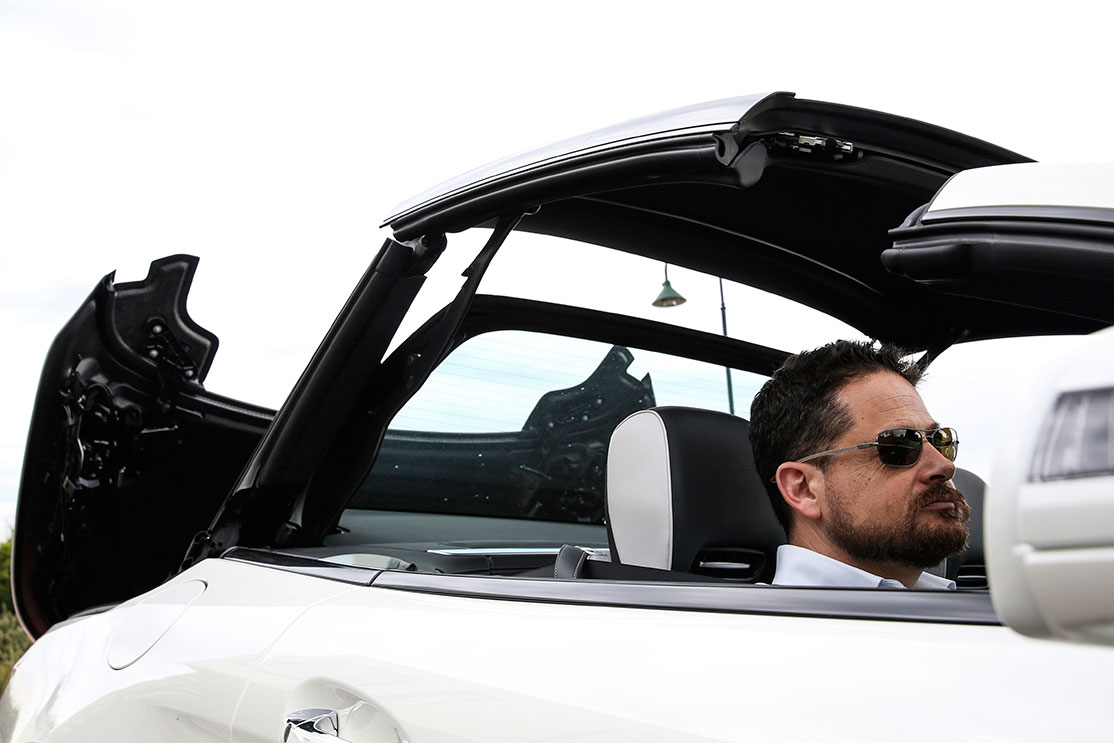 With its folding-hardtop lid stowed away, the opportunity is there to enjoy the SL’s internal combustion soundtrack more than usual. The new twin-turbo six tries very hard to find a good aural balance between sporty and luxury, and almost succeeds.

Even so, it’s nothing like the raucous two-wheeled rocket-ship I once owned called a Kawasaki ZX-9R.

I put an aftermarket pipe on this sportsbike, which made it more characterful and louder – but not overly so – and unleashed an insane crackle, pop and burp on overrun. Evocative. Exciting. Delicious.

Took my enjoyment of that motorbike to new highs. Added a few horsepower, too, but for me the soundtrack alone was worth the price.

A more evocative soundtrack is on the Benz SL options list, but it comes with an AMG price tag attached.

NEVER thought I’d find doors to be a challenge. The concept is simple enough: open door, go through, close door. I’ve been doing this successfully for four decades. Well, there has been the odd painful hiccup, for which I blame alcohol.

The SL has long doors that need a good three feet in which to operate, or the opening is severely compromised. Which it often is. Which means I do a strange contorted vertical limbo as I extrude myself.

Scuff marks on the door’s lower panel give count to my less than perfect starts as I swing my legs way back to where the opening is widest. Then, rather than scratch the car next door, I place my fingers directly in harm’s way between my door’s trailing edge and the other car’s door panel. The tighter my squeeze, the more my fingers are squeezed. It’s never elegant.

The only places I’m assured of an easy egress are my driveway and kerbside spots. Elsewhere, it’s compromised because Australian parking spaces are not wide. I’m not saying they should be, but the SL ownership experience has helped me understand why wealthy types do yoga.

I’ve also started keeping a baseball cap in the car. Last month I vowed to drive topless as often as possible. This, too, has not been easy, but not because of the summer sun’s intensity. I expected that. It’s the delay each time I get in to drive.

The SL’s roof refuses to operate if the car’s moving at anything above Zimmer-frame pace. Benz claims it’ll go up, or come down, at vehicle speeds up to 15km/h. My read of the speedo suggests it’s below 10km/h, which is easy to exceed, even in my driveway. So I’ve been forced to work the roof into my start procedure, right after I put the seatbelt on and hit the starter button. It’s only 15 seconds, but it feels soooo long.

The feeling of being ‘on show’ is acute while the roof does its origami act in public. Also, the roof switch occupies my left hand, so I can’t simultaneously set the nav, or tune the radio, or engage the stubby gearlever, or anything really. A First World problem, sure.

Listen to me whine about what amounts to 30 seconds for each drive. But it’s caught me by surprise how much I really begrudge it. When was the last time you did nothing for 30 seconds and didn’t subconsciously reach for your smartphone? Waiting for an elevator, in line for a coffee, at the bus stop...

Okay, I ain’t catching the bus. Driving the Mercedes-Benz SL400 is much nicer, and the person beside me doesn’t have BO, or mutter to themselves.

Wheels’ resident lefty John Carey holds fast to the law of diminishing returns, which declares that value does not increase commensurately with price. JC wields this baton most effectively during our annual Car of the Year testing week.

The argument goes that a $100K car is not twice a $50K car, therefore it should be judged less favourably on Value. Superficially, it makes sense: a $100K sedan cannot carry twice the people, nor will it accelerate twice as quickly, or cover twice the distance on the same fuel, or be twice as safe and have twice the features.

There’s an obvious flaw here. Is 2m² twice the size of 1m²? No, it’s four times, because both length and width double. So, if only one measurable quality doubles – say, engine output – is that sufficient to overturn the law of diminishing returns?

Cars are too complex to be valued in such a simplistic fashion. And it’s wrong to say that luxury or sports cars don’t represent good value. On the contrary, they represent fantastic value to their owners. 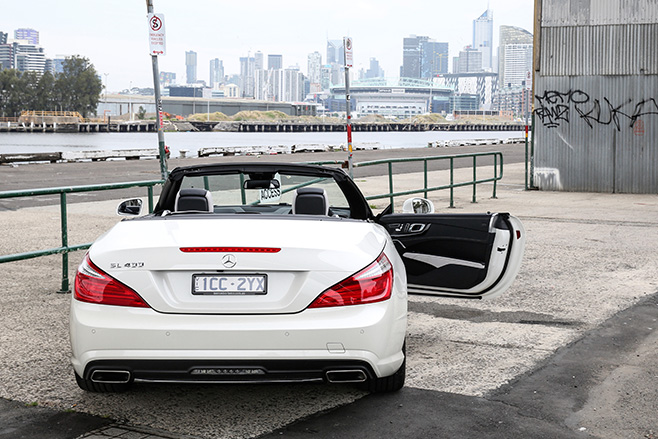 Take the indirect red ambient lighting that gently illuminates the cabin at night. And the way the transmission automatically engages park when a door is opened (I had wanted to make sure I was wholly within my parking spot…). And speaking of doors, the pockets can take an umbrella. Perhaps this is partly why they’re so long.

This SL also has a variety of roadster-specific value-add features, not least the electric retracting hardtop. It wouldn’t be a roadster without it, but don’t underestimate the work that went into finding a way to stow said roof and only lose less than one-third of the SL’s boot capacity.

And what about the boot’s kick-to-open (and kick-to-close) feature? That’s handy to have when my hands are full, though I do feel like an idiot doing the one-legged activation dance.

The front seats have heaters and coolers in them, and air vents to warm your neck. The leather chosen for these seats partially reflects the sun’s heat, a welcome touch on a hot Melbourne day. And there’s a handy window master button that raises or lowers all four simultaneously.

Acoustically tuned voice-control entertainment system, autonomous driving features… How do we value these assistance technologies that no doubt cost millions to research and develop? And how much value should we ascribe to the quieter cabin, more compliant ride, effortless acceleration, and that evocative exhaust note? 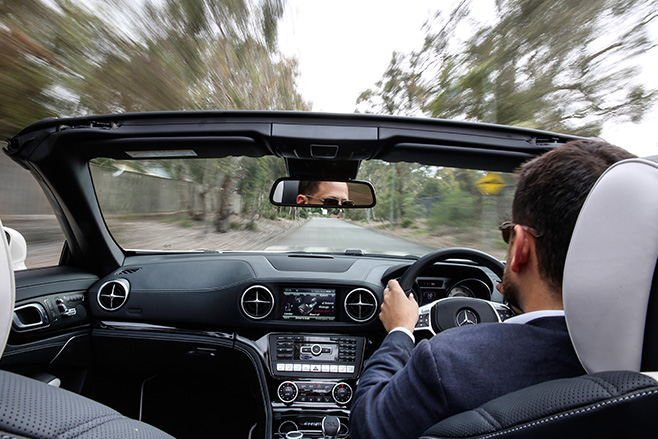 You get my point. The SL400 is not seven times a well-specced Mazda 3, but its ‘true’ equipment list would be.

Those who ascribe to the law of diminishing returns will never see financial value in luxury cars like the SL roadster. But for the few wealthy enough to afford it, the SL’s value goes beyond the obvious. It’s all those thoughtful value-adds that subtly yet tangibly enhance the ownership experience.

And let’s not forget the ego. That is, after all, at the heart of everything Mercedes-Benz sells. No Benz does this better than the indulgent and decadent SL roadster.

At its core, though, sits an impressive and invigorating driving machine. Rides beautifully, sounds meaty, goes effortlessly, steers with alacrity and accuracy. All the while spoiling you better than most cars on the market.

It has a few foibles, which I’ve documented in past reports, but none that diminish the experience in any considerable way.

So, the big question: Would I buy one? No. My automotive palette prioritises performance over panache. But for those in less of a hurry, and for whom motoring should be sumptuous rather than speedy, try an SL400 for size. 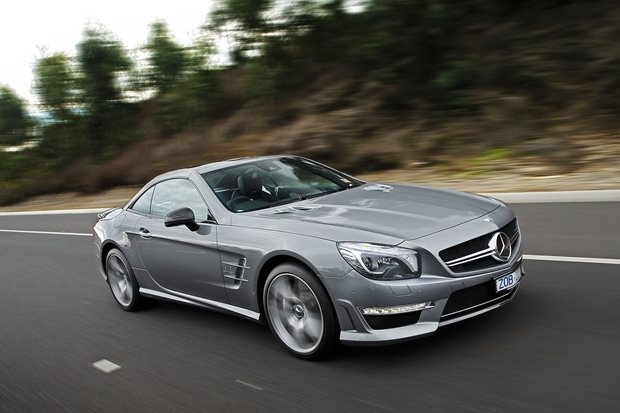 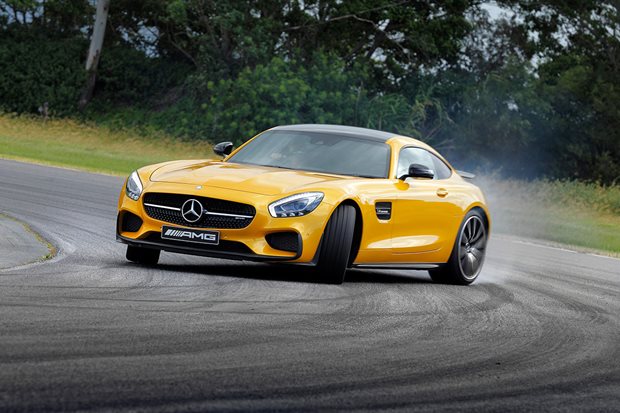 The verdict on AMG's new 911 fighter 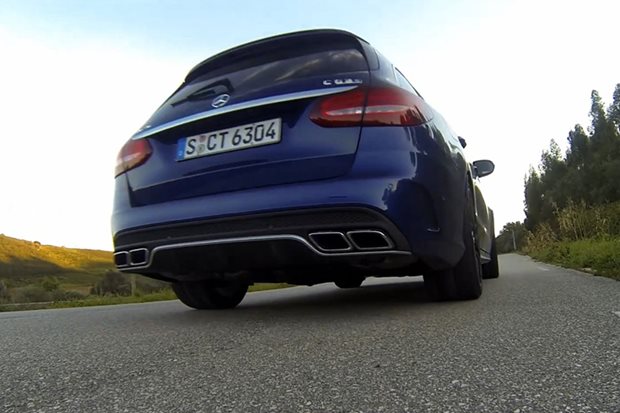