Drivers are spoilt for choice with Nissan’s medium SUV offering. The X-Trail is available in twelve variations, including 2WD or 4WD, five or seven seater, petrol or diesel and with the choice of a manual or Continuously Variable Transmission (CVT).

The Nissan X-Trail ST 4WD Auto five seater, tested here, comes with CVT only. It’s priced at $33,980 (not including on roads). Fuel consumption is a reported 8.3L/100km. This model, launched in 2014, is far more stylish and sophisticated than its boxy predecessors. It has the makings of the ideal cross-over: equally comfortable at both the school pick-up and a weekend away in the snow.

• Talk about bootylicious. The X-Trail’s Divide-N-Hide configurable cargo system - available in every model bar the seven-seater - is pure genius. The boot floor lifts up and splits in two to reveal two separate, hidden compartments - perfect for storing wet ski gear/ sandy towels/mouldy wetsuits. One of the false floor panels can be raised to create a second shelf ideal for luggage or weekly shopping. This model’s rear storage area is an impressive 550L rising to 1520L with the second row seats folded down.

• In keeping with Nissan’s off-road roots, the X-Trail 4WD models allow the driver to select either 2- or 4WD - refreshing in an era of electronic robotic nannies that threaten to remove both choice and control for drivers.

• The X-Trail ST 4WD is spacious. It has a big cabin and comfortably seats five adults with heaps of leg room in the front and back. 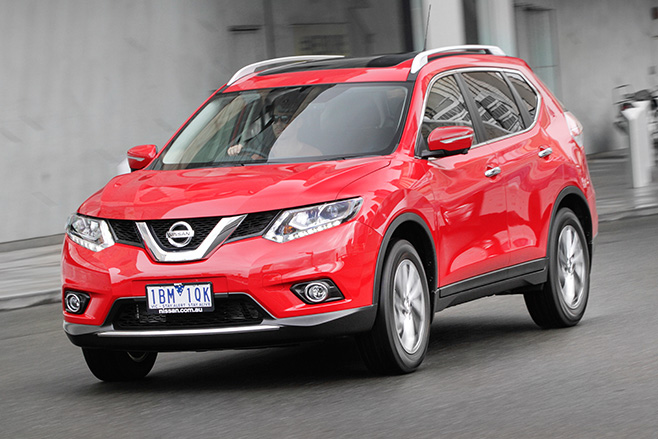 • All models come with rear air vents which are important on long family trips.

• This model looks less boxy and rugged than its pre-2014 predecessors. It’s not quite what you’d call sleek, but the latest X-Trail has moved well beyond its utilitarian roots.

• The X-Trail ST 4WD is powered by a 2.5-litre petrol engine that generates 126kW of power combined with a relatively anaemic 226Nm of torque. It’s a naturally aspirated donk crying out for turbocharging. The X-Trail suffers from slow acceleration in city driving. This medium-sized SUV also struggles up hills, and is frequently overtaken by frustrated drivers on the inside lane.

• Fuel consumption is a reported 8.3L/100km. Our test was closer to 9.3L/100km over 100km of mostly urban driving. If you want a less thirsty option go for one of the X-Trail’s fuel efficient diesel models which consume just 5.3L/100km on the official test.

• While the X-Trail gets a gold medal in the boot department, it bombs out when it comes to interior storage. While the bin between the front seats is not as impractical or narrow as that of smaller sibling Qashqai, it’s too far back and insufficiently deep to hold anything of worth. The side door bottle holders are also little more than perfunctory. 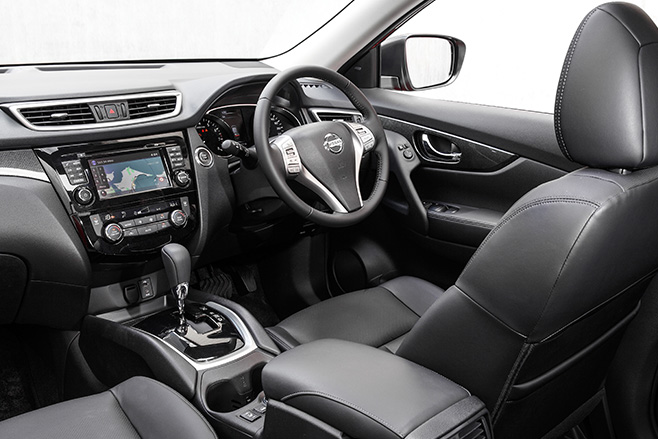 • Rear passengers may be blessed with seat back pockets, but there is no central storage area for little tykes to deposit their toys. While the middle seat folds forward to create an armrest with drink holders, this converts the practical five-seat layout into just four pews.

• Urban warriors will find the X-Trail’s suspension a tad disappointing. When confronted by speed humps, the SUV tends to amplify rather than absorb tarmac hurdles.

• Infotainment is delivered via a five-inch LCD display with a basic CD player, MP3 capability, AM/FM Radio, and Aux/USB capabilities. My biggest gripe, however, is the confusing and cumbersome proprietary app-driven NissanConnect system. It makes connectivity a real chore.

• The cloth trim, standard on all base models, absorbs all manner of nasty kiddie stains, smart buyers should opt for leather trim in the ST-L or Ti 4WD models.

The popular Mazda CX-5. Toyota’s RAV4. The Ford Kuga with its punchy 178kW 2.0-litre turbo petrol engine is also worth a look.

Click here to read the full review of the Nissan X-Trail range.