The Trafic is Renault’s answer to the Toyota Hiace, and the variant we have here is pitched as the most versatile variant in the range. With a second row of seats giving it a six-person capacity and a long wheelbase endowing it with plenty of cargo capacity, it’s perfect for getting your crew to the worksite – or for hauling your family on weekends. 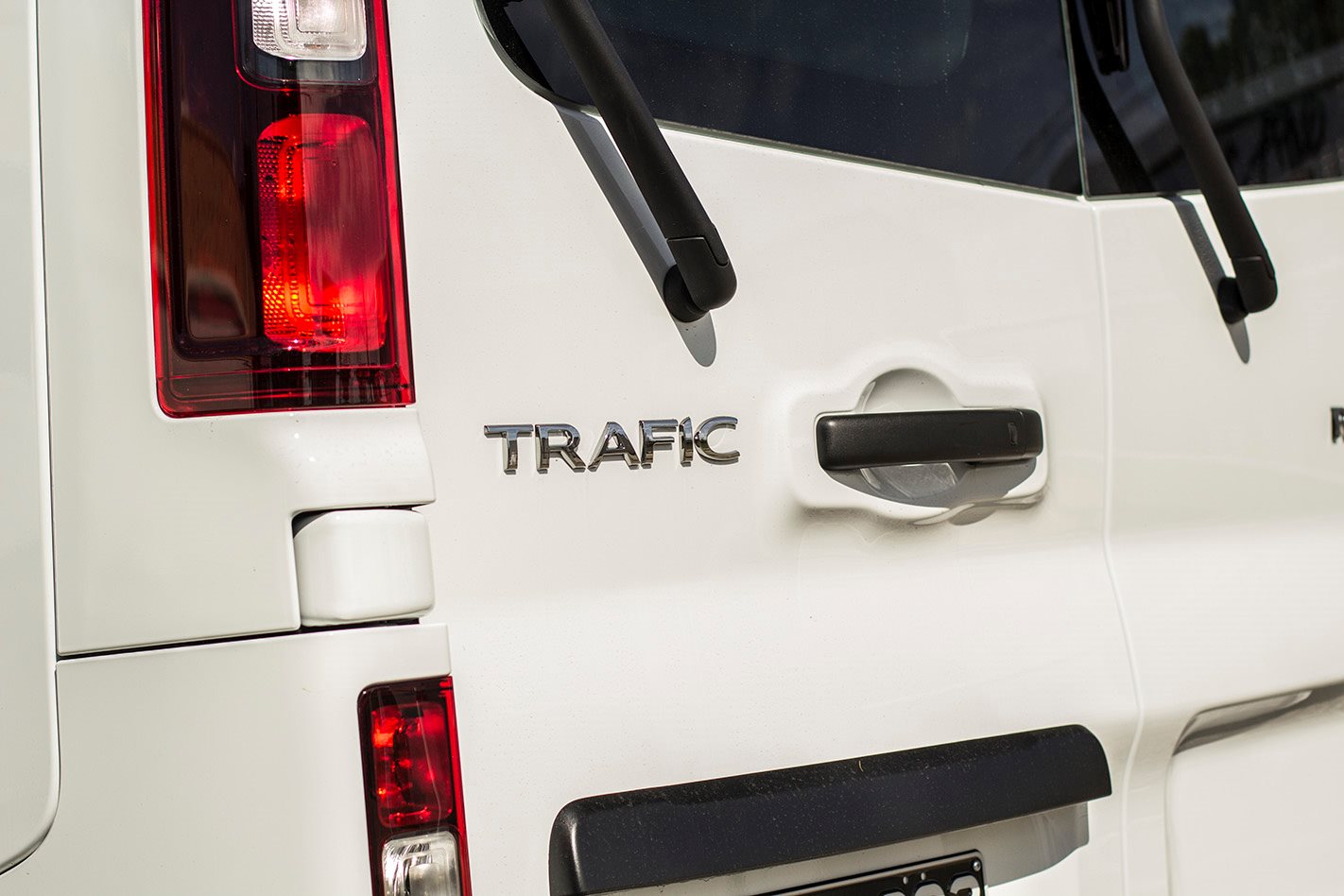 This is also a new addition to the local Renault Trafic lineup, introduced at the end of last year and bringing with it a long-awaited automatic transmission option as well as a more powerful 125kW 2.0-litre turbo-diesel engine.

What's the Renault Trafic Crew like to live with?

Practicality is obviously job number one with a commercial van, and the Trafic Crew scores highly. Sure, you lose the ability to carry outsize cargo if you opt for the Crew variant and its second-row seating, which isn’t easily removable and features an integrated bulkhead behind your passengers, but it’s more versatile as a result. 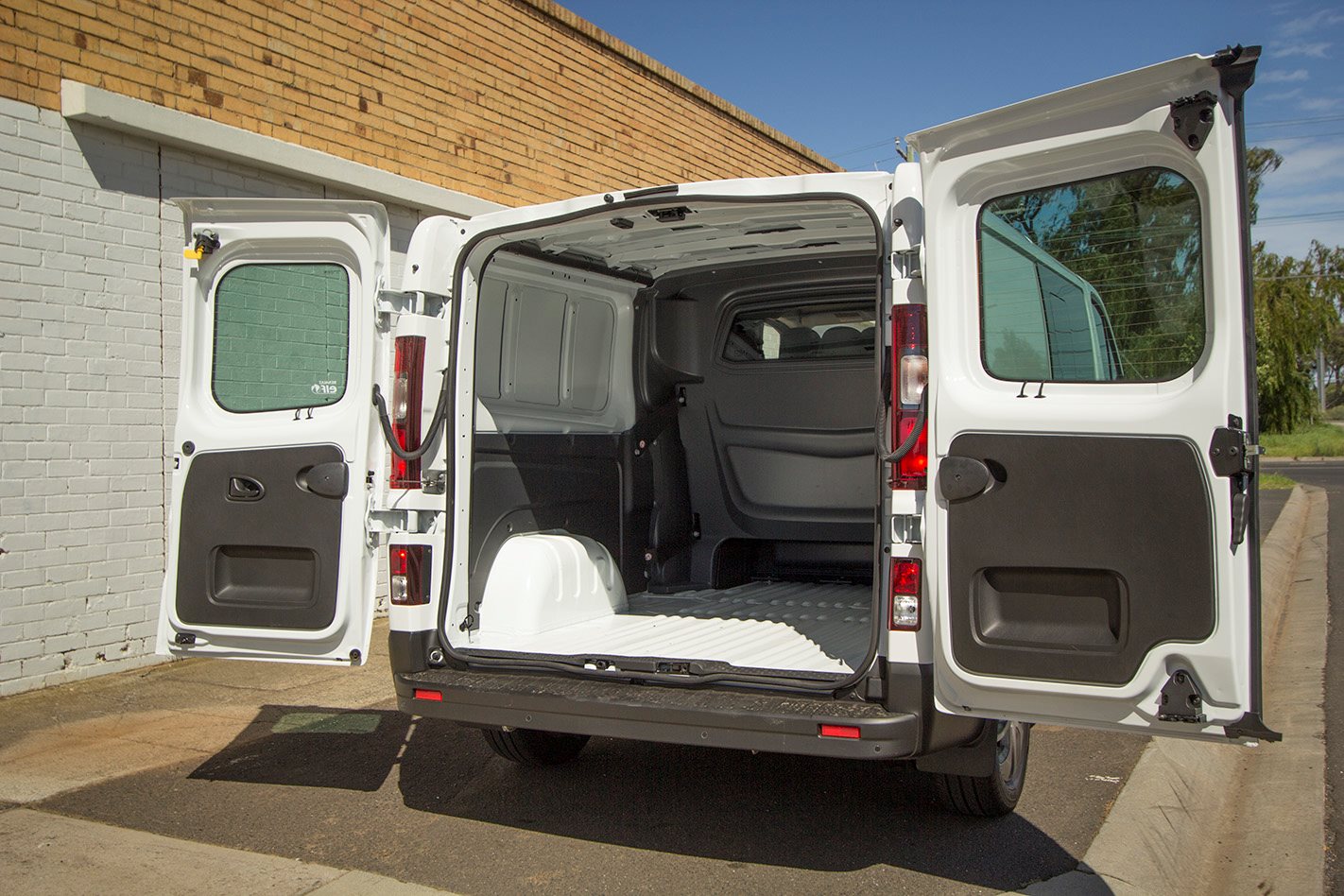 Even with the rear compartment divided between passenger and cargo space, you still end up with up to 2.42m of cargo bed length (if you utilise the space under the rear seats – there’s just 1.74m from the rear doors to the bulkhead itself) and enough room between the rear wheelarches to slide a pallet. Rear barn doors are standard on the Trafic Crew as well, so bringing a forklift right up to the rear is easily done.

READ MORE: Should I buy a ute or a van for my business?

Plenty of tie-downs keep it easy to secure loads to the bare steel floor, but it’s really up front where the Trafic sets itself further apart from the rest of its rivals. For a boxy workhorse, it’s actually pretty nice to be in. The front seats are comfortable and supportive enough for long drives, while the three seats in the rear are nicely spaced apart, equal in size, equipped with fold-down armrests AND are adjustable for recline. 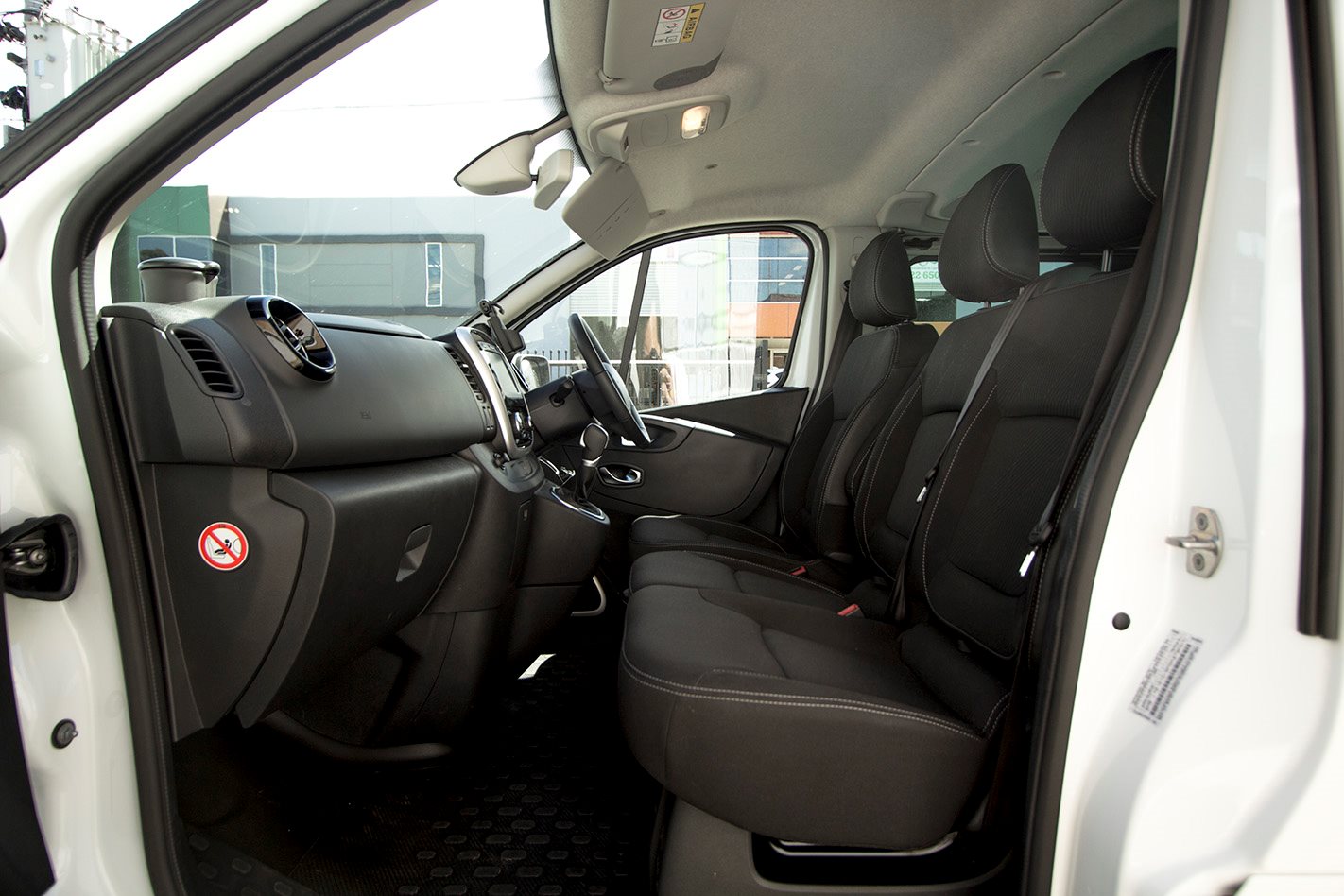 A pair of sliding windows in the rear doors (left and right sliding doors are standard on the Trafic Crew) with retractable sunblinds enhance passenger comfort further, and the roof lining and cabin plastics don’t make it feel as though you’re sitting in a big steel box. It’s all very nicely finished and very civilised, while also taking care of the utility considerations that every work van needs.

A heated driver’s seat and climate control are standard on the Crew, and though the infotainment suite is a little old the touchscreen is easy to get around and there’s Apple CarPlay and Android Auto support as well. 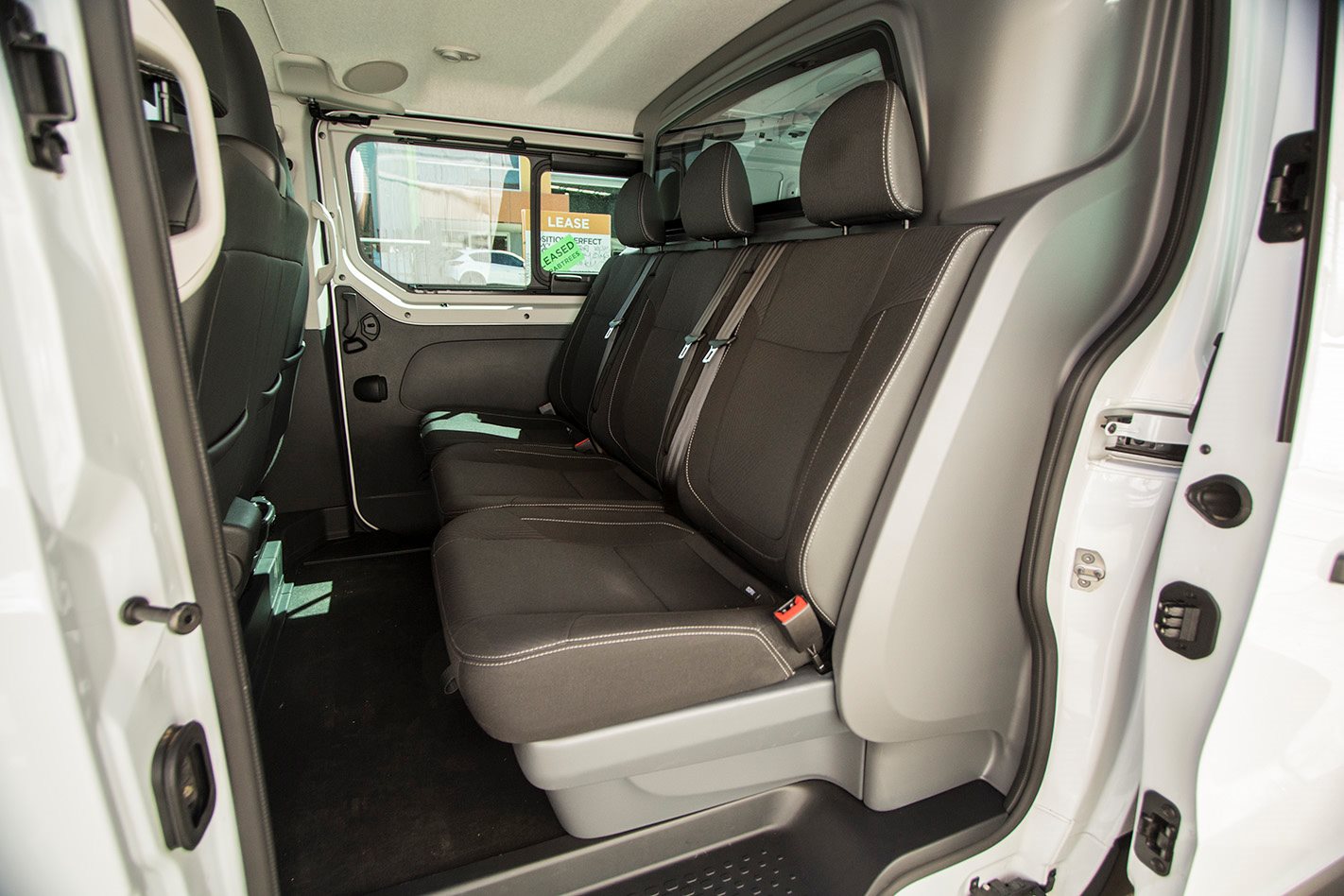 In-cabin stowage is good too, with under-seat cubbies alongside the usual trays, gloveboxes and door bins. Our only major complaint from a getting-work-done point of view would be the shortage of USB power outlets, with just one on the dashboard and none for the rear seats. There’s a 12-volt outlet in the cargo area and up front, but a 230V power point would be a great thing to recharge tool batteries on trips between jobs. 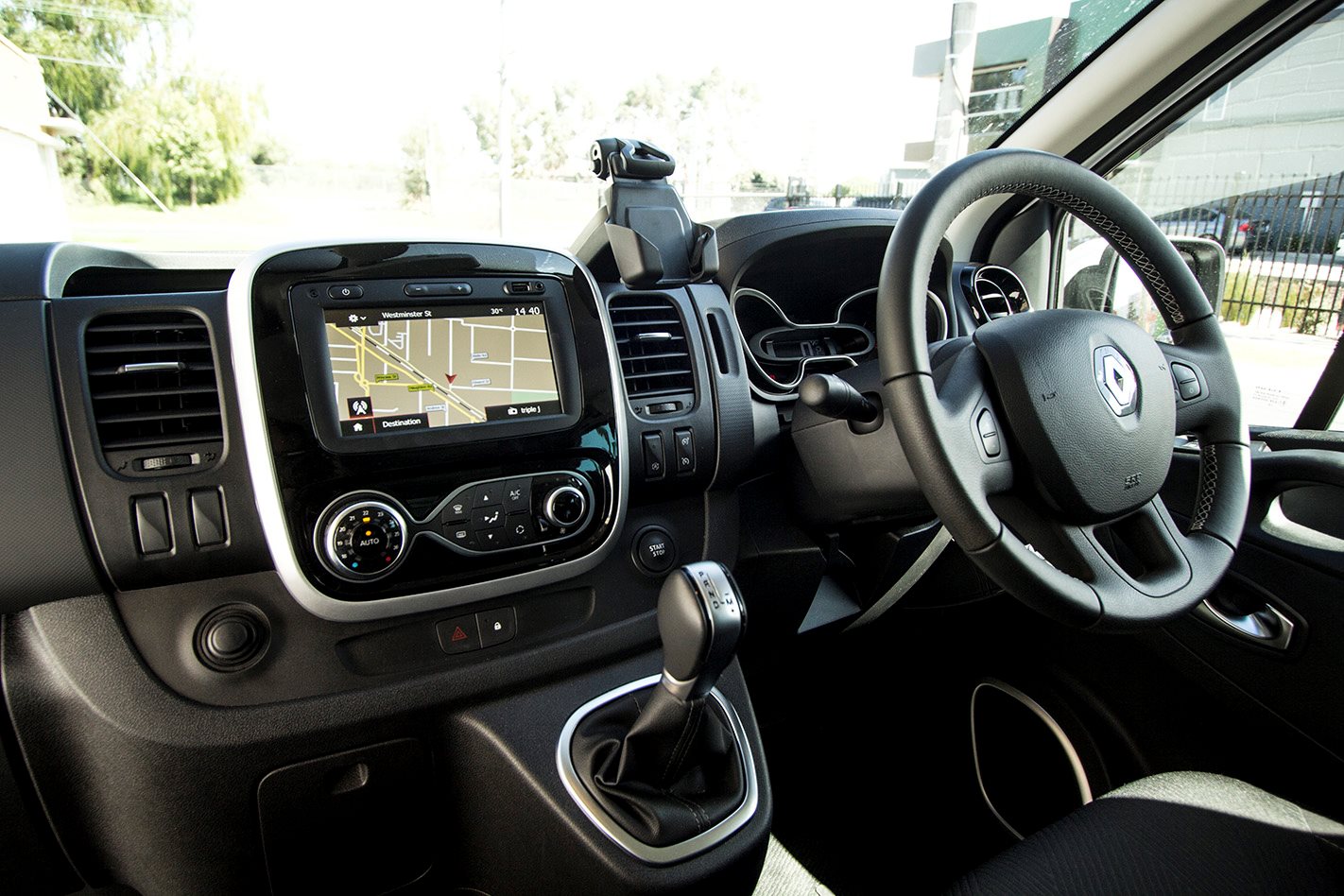 At 5.4 metres long and tipping the scales at just over 2 tonne empty, the Renault Trafic Crew is a big unit. Thankfully, it’s an easy thing to wield.

That 125kW/380Nm 2.0-litre turbo diesel four-cylinder only drives the front wheels, but it’s tractable, smooth and feels less overburdened by weight than, say, the 300kg fatter Toyota Hiace. However, the Hiace’s six-speed conventional automatic is a little easier to live with than the Trafic’s newfound auto. 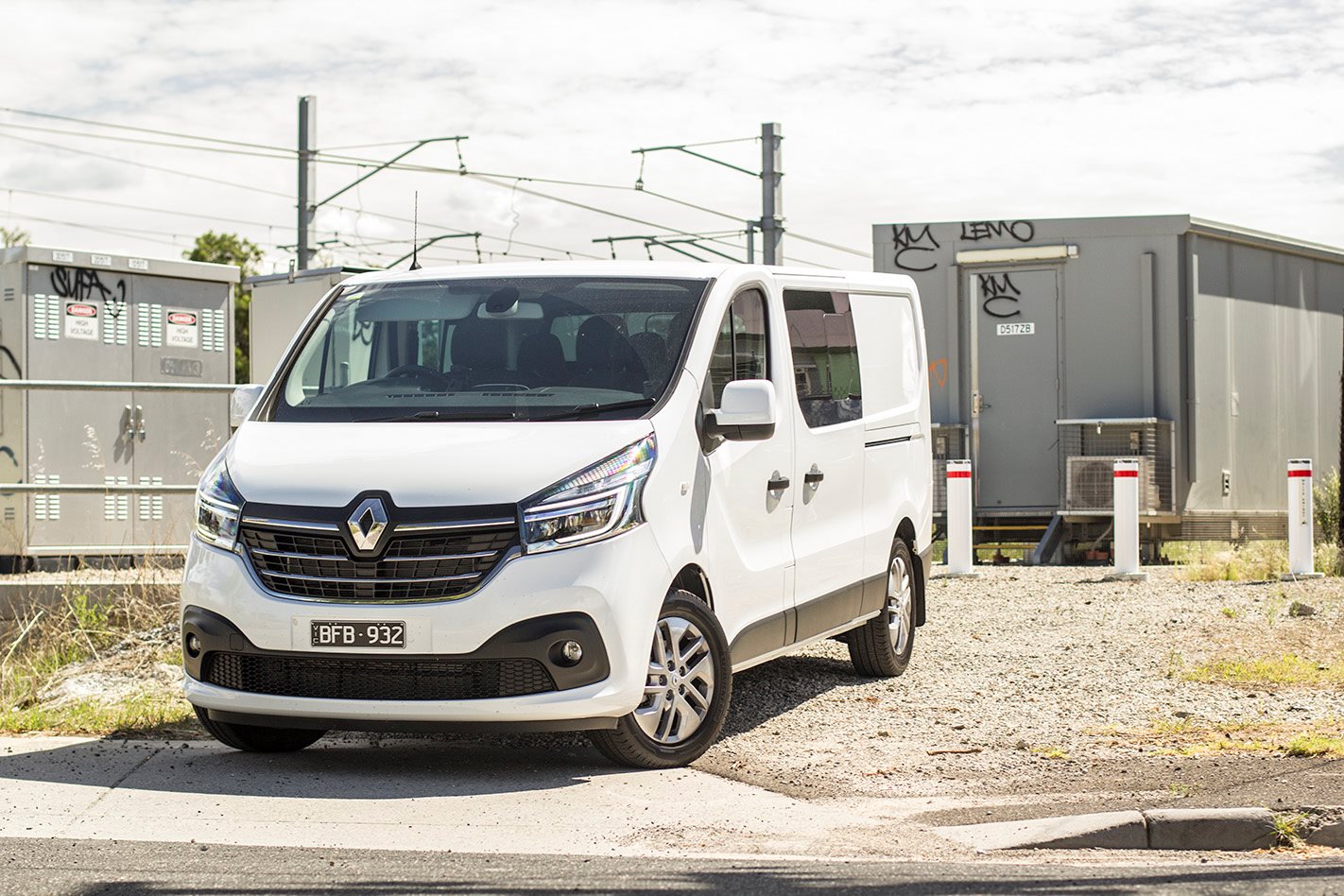 Being a dual-clutch automatic, the take-up from standstill isn’t quite as seamless and progressive in the Trafic than it is in vans like the Hiace. Gearshifts while rolling aren’t super-quick either, which is usually a dual-clutch forte, so the decision to use a dual-clutch is a little puzzling from our perspective. It makes doing those low-speed crawl movements (such as pulling up into a loading dock) more jerky than they should be.

The engine start-stop system can be a little slow to wake up – particularly if you’ve just come to a halt and the light ahead has turned green – which exacerbates the auto’s reluctant nature. It is, however, far more likeable than the single-clutch automated manuals that French commercial vehicles have favoured in the past, and infinitely preferable to rowing a manual all day. 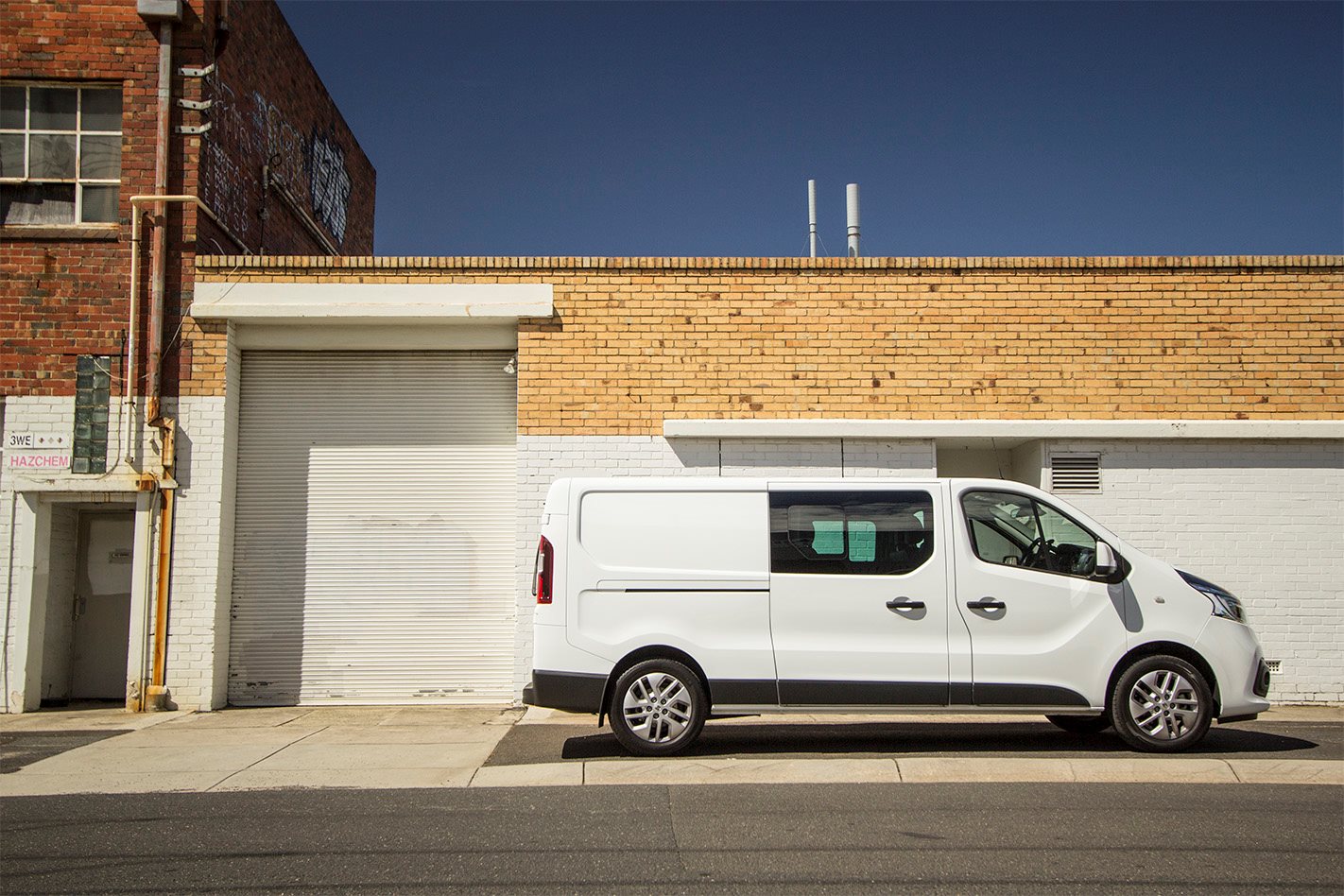 Underway, the Trafic’s 2.0-litre feels strong and gutsy, and copes well when there’s a few hundred kilos of luggage and people aboard. The ride is much better with some weight on the rear axle too, as it usually is for commercial vans, and it feels settled and well-damped. The steering is light but not completely wooden, though the 13.2 metre turning circle of the long-wheelbase Trafic naturally necessitates greater thought when turning in tight city streets.

The wing mirrors are nice and big, augmented by smaller and more convex kerb-watchers underneath and a somewhat unusual blind-spot mirror hidden in the passenger’s sunvisor. A reversing camera is also standard, and essential. 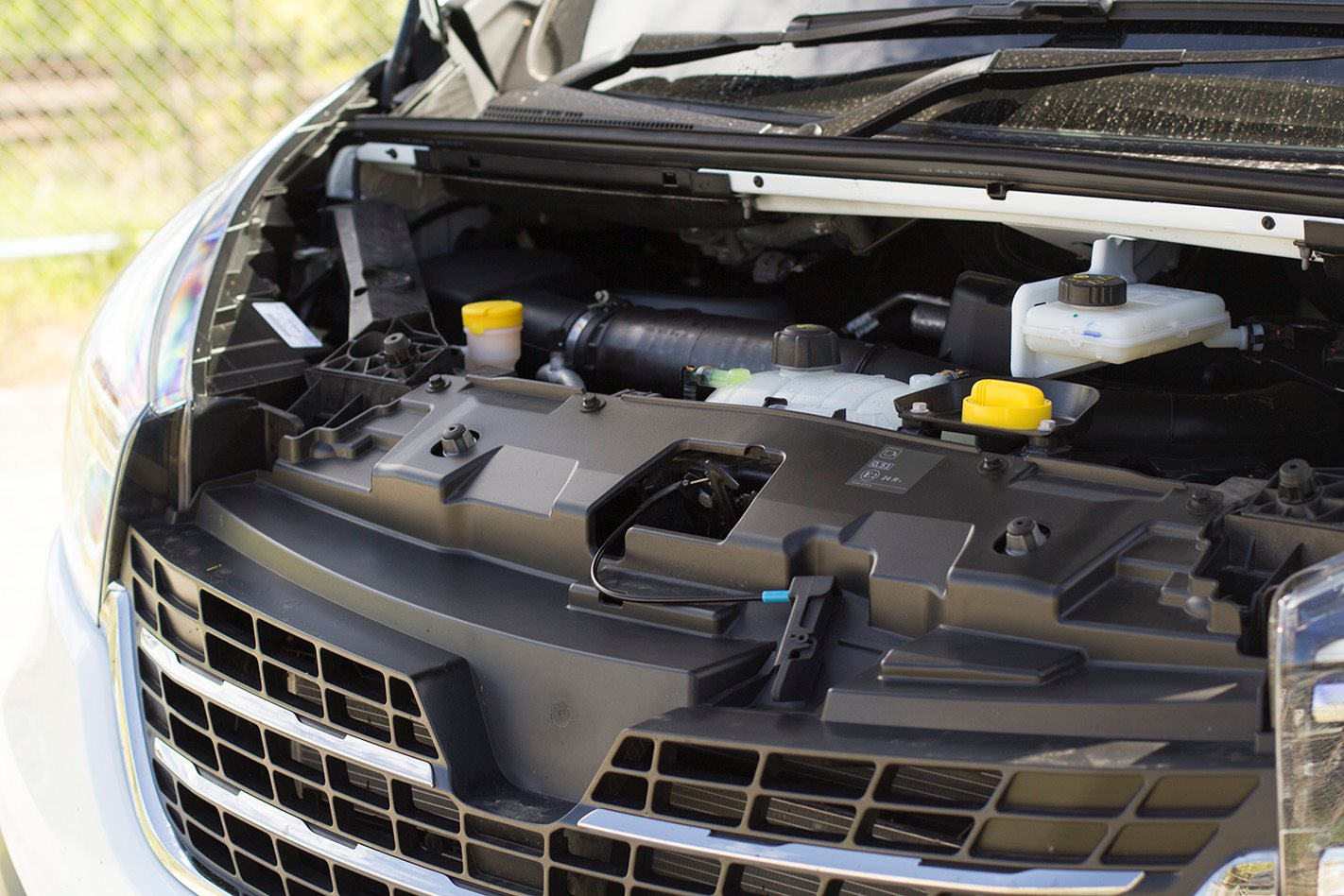 On a fairly even mix of urban and highway driving, we saw a combined fuel economy of 7.3L/100km – just 0.1L/100km above Renualt’s claimed figure and an admirable number for a two-tonne-plus van.

There are a few compromises as a result of being so big, however. The Trafic Crew can only accept a maximum payload of 1118kg, and its tow capacity of 1630kg on a braked trailer isn’t really the best for, say, a decent-sized boat or large caravan. Fine for lighter trades, but not so good for hauling heavy equipment. 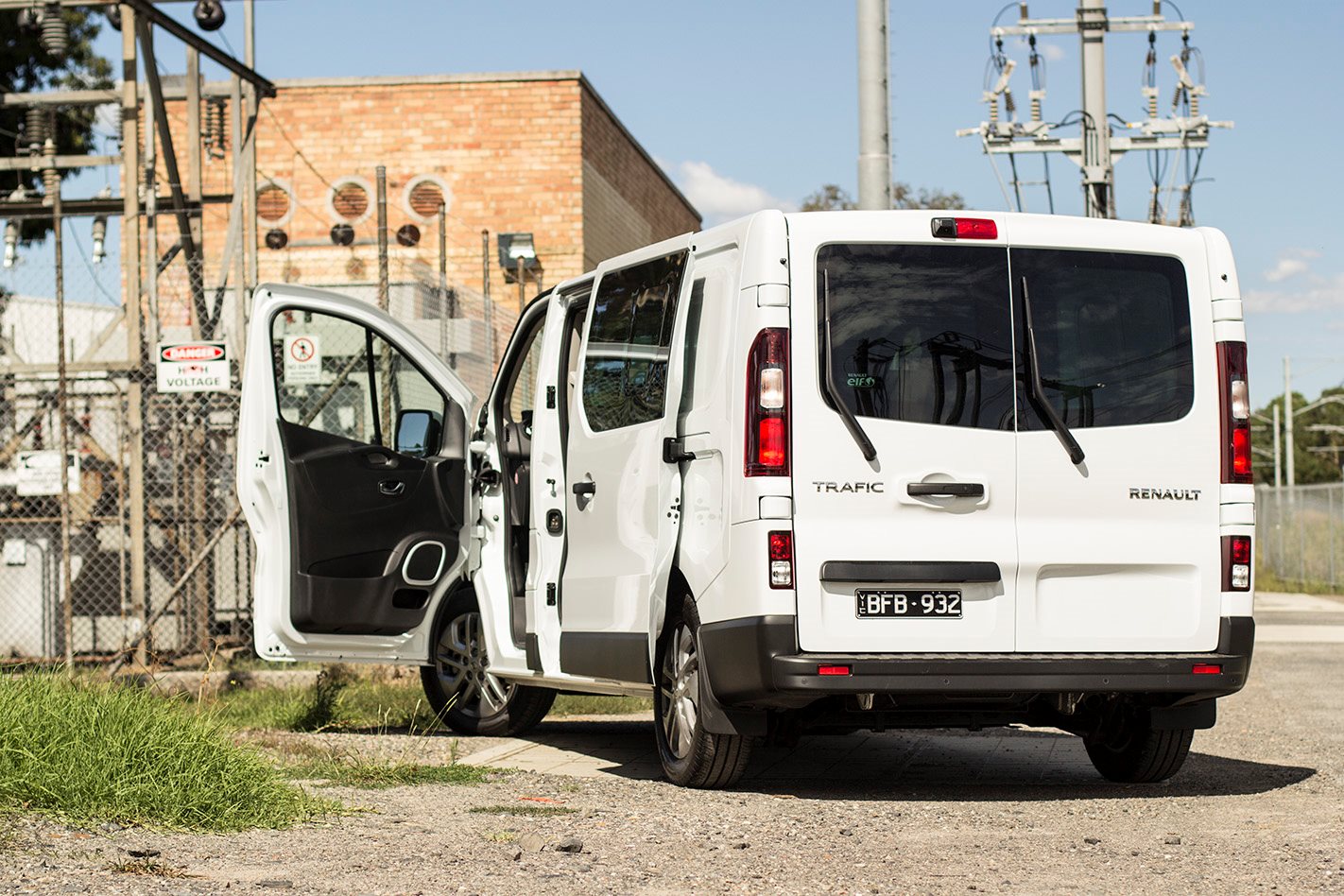 Is the Renault Trafic Crew worth the money?

The Renault Trafic Crew is one of the best-balanced and most civilised midsize commercials on the market, and the combination of an automatic transmission and a gruntier diesel powertrain just makes it even better. If you need to carry some people along with you, it also stands out for not stuffing your backseaters into third-world accommodation.

At $52,490 before on-roads it’s on the high side of its segment, cheaper than only the Mercedes-Benz Vito Crew van. It could use a bit more in the safety department too, with blind spot monitoring, AEB and side airbags for the rear passengers not available.

However, for a big six-seater with plenty of space to get the job done, it’s pretty hard to go past. 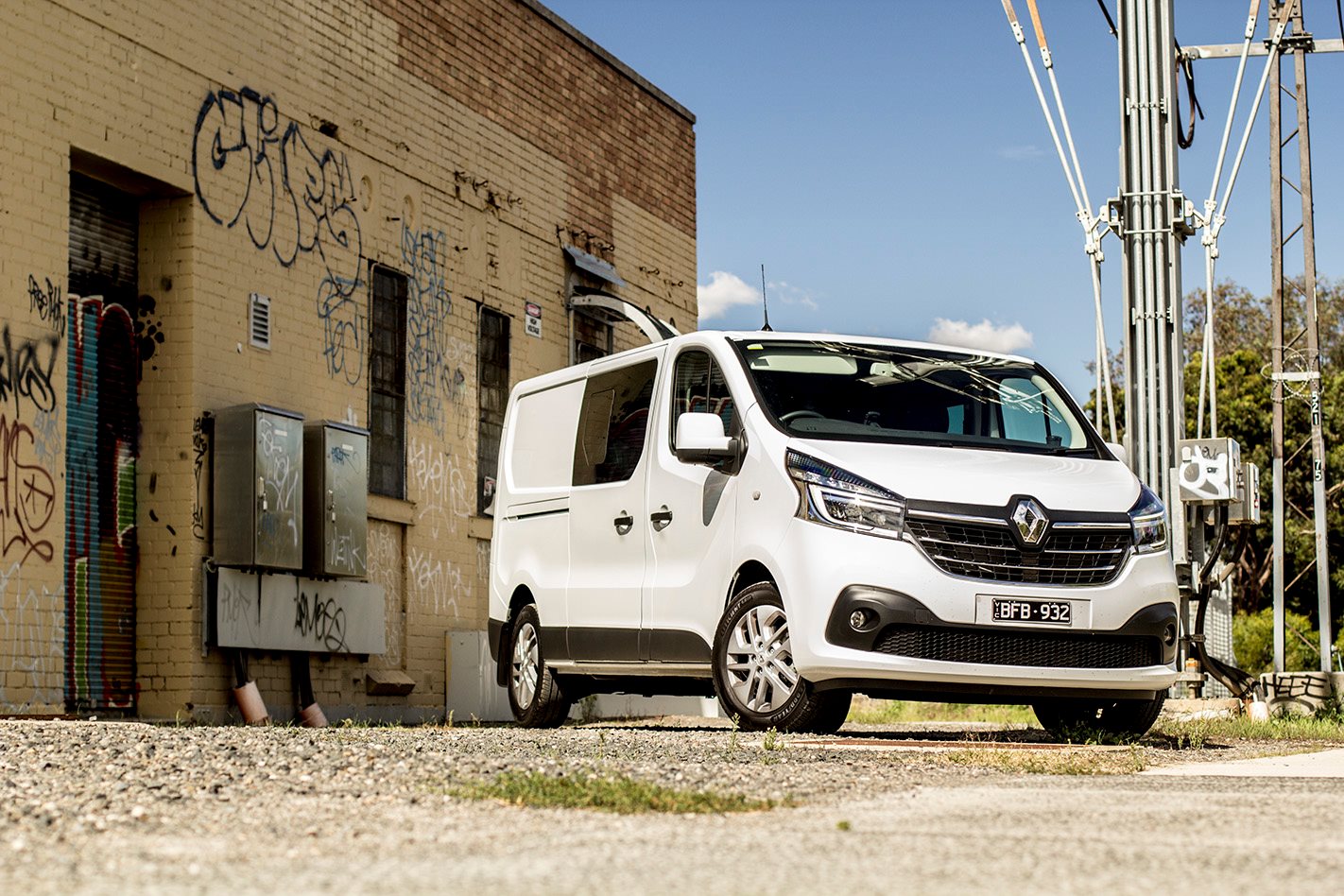 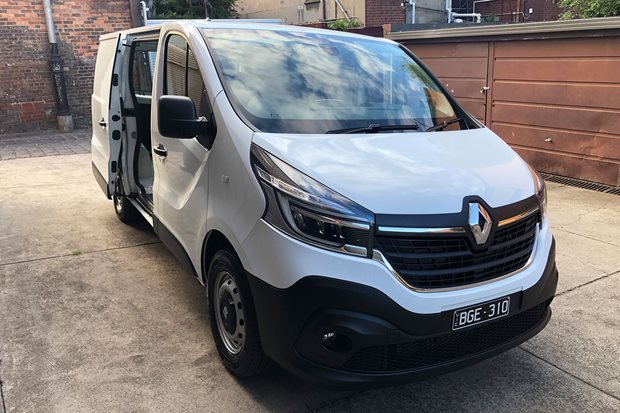