A whole lot of dirt, 1500km and one of Australia’s most notorious off-road tracks wasn’t enough to curb my enthusiasm for a girl’s trip to the Birdsville Races in a Land Rover Discovery Sport.

When you think of road trips through outback Australia, you probably picture an endless mass of land leading to nothingness. Simultaneously harsh and beautiful, and so remote it’s only accessible by a kitted out four-wheel drive. But what if we said you don’t have to trade in the city-faring SUV to experience this spectacular part of Australian country?

Driving the 1578km journey through Outback Queensland from Brisbane to Birsdville is one of those once in a lifetime opportunities that will leave you yearning for more of Australia’s bushland. 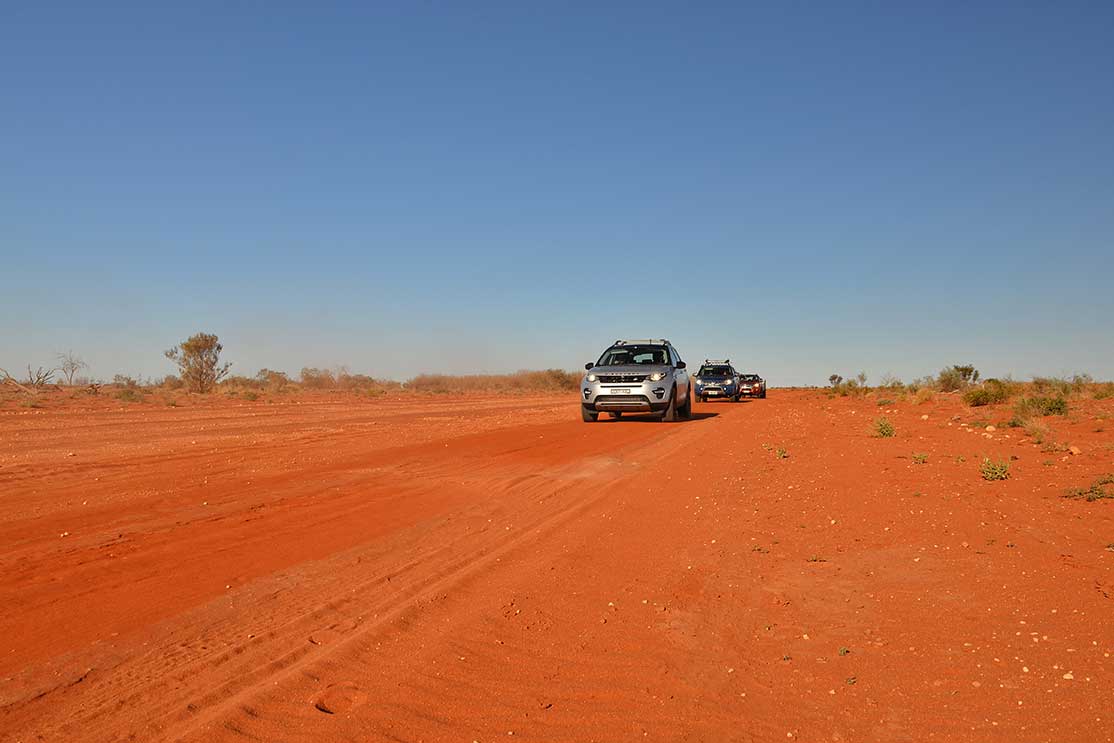 The Discovery Sport gets its tyres dirty. Photo: Reichlyn Aguilar

Birdsville sits on the border of South Australia, Northern Territory and Queensland. It’s the gateway to the famous Simpson Desert. Each September the town, which is also known as the ‘town in the middle of nowhere’, sees its population swell from 100 people to nearly 8000 travellers who make the journey for the horserace that stops the outback – the Birdsville Races.

It’s a journey that’s on the bucket list of every off-road enthusiast, keen to clock a good time on the treacherous Birdsville Track before tackling Big Red, the first of the Simpson Desert’s 1113 sand dunes.

So when we received the invitation for a six-day expedition with 11 other women (plus our trusty guide Dave from Australian Off Road Academy) to the Birdsville Races, and the opportunity to tick a few boxes on our bucket list, we jumped into the next available car. In this case, that was an off-road capable Land Rover Discovery Sport HSE. 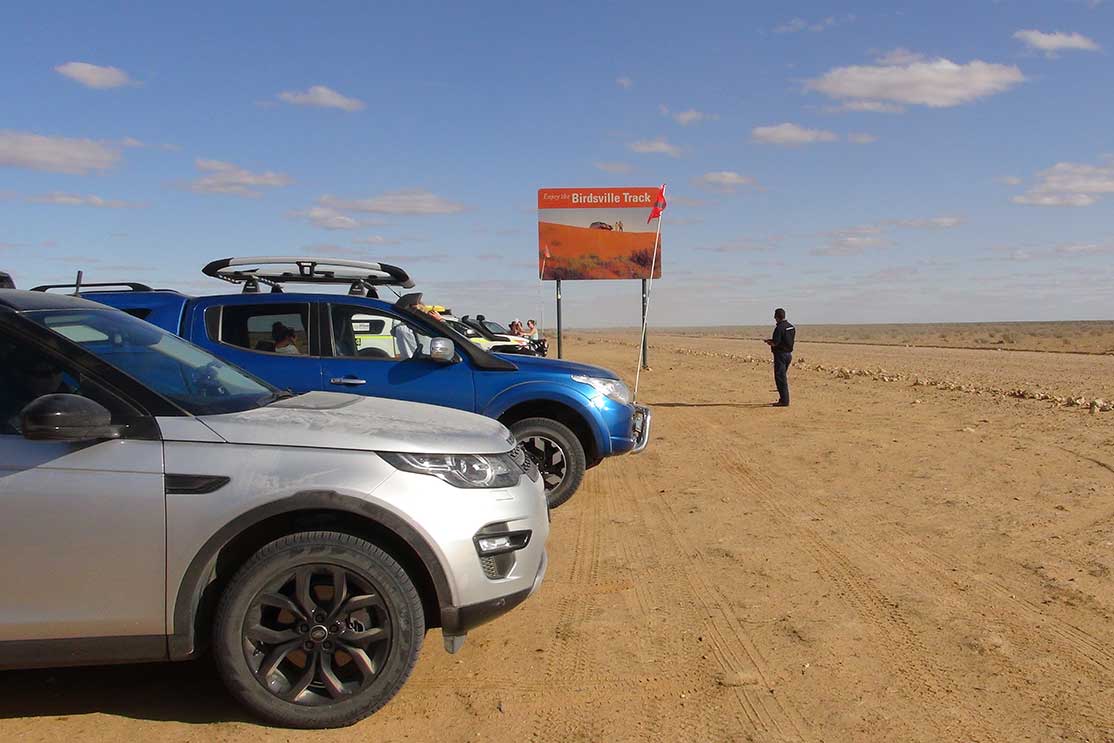 Thousands of kilometres later, we find the Birdsville Track. Are we there yet?

The seven-seater SUV is far more at home on city roads ferrying families with the occasional weekend getaway than it is tackling some of Australia’s most in-land off-road tracks. But the Discovery Sport does have a few all-terrain tricks hidden under its arches.

In the world of 4x4s, the vehicle you drive is like a badge of honour. The muddier the bonnet, the bigger the tyres and the tougher the bull bar, the more respected you are. Throw in the harsh-tongued characters of the outback, and a soft-road Discovery Sport on standard 18-inch road tyres joining our convoy of Mazda BT50, Mitsubishi Triton and Toyota Land Cruiser 79 Series ute, and you’re basically walking into the lion’s den.

The Discovery Sport is basically the compromise for people wanting the style of a Range Rover Evoque, with the space and capabilities of a Land Rover Discovery. It comes kitted out with 4WD technologies like Land Rover’s Selec-Terrain system with different settings for varying road conditions (Auto, Sport, Snow, Sand/Mud, and Rock), Wade Sensoring tech to gauge water depth and a surround camera system that offers 360 degrees of visibility. And aside from the plastic-like feel in some areas, the interiors are as comfortable and classy as you’d expect of a city SUV. 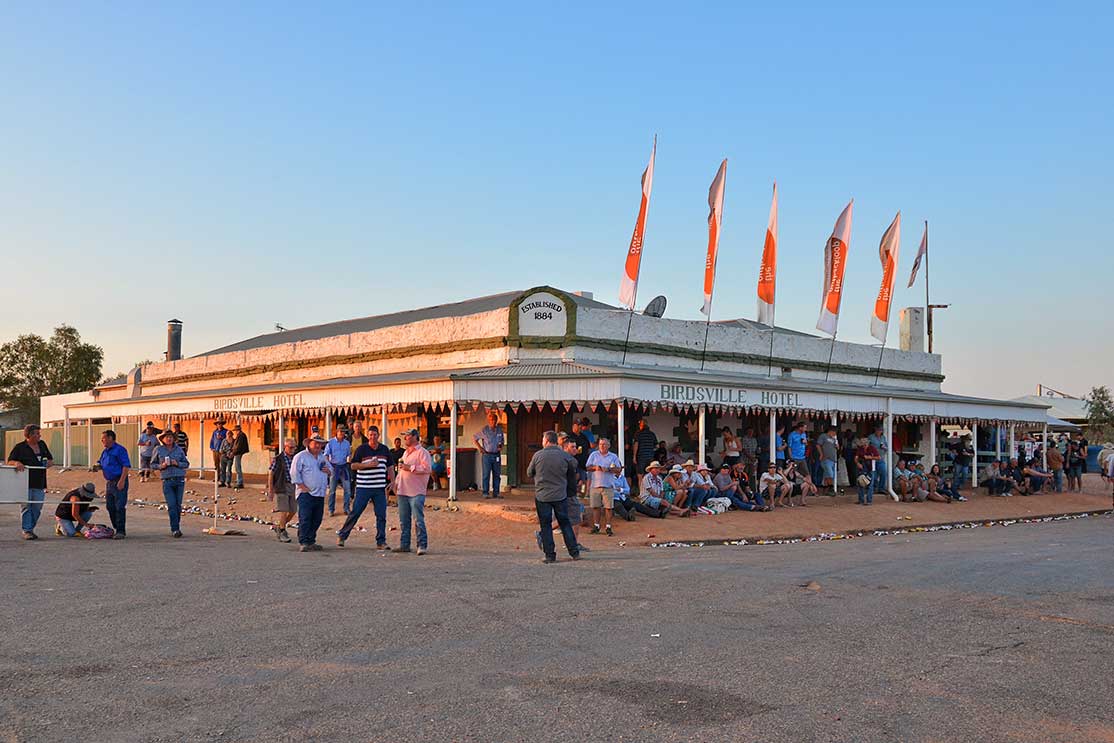 This was our chance to put the Discovery Sport to the ultimate test – how well does a stylish seven-seater SUV mesh with the dusty, rutted tracks of Australia for the trendiest event of the outback?

As the landscape changed from Brisbane’s cityscape to the paler sands of gumtree country, the passenger seat of the Disco was entrenched in a game of musical chairs. The unobtrusiveness of the car on sealed roads with the comfort of the leather seats saw passengers scrambling for a turn in the ‘lux-car’. The transmission was smooth, the engine was quiet and, there was plenty of room inside for leg stretching and more importantly, space to house plastic containers of vanilla slice.

But we knew the comfort of the sealed roads and regular town-stops wouldn’t last and towards the end of the first day, the red dirt finally entered our sight as we passed the famous Nindigully Pub which sits on the edge of the outback. From there it was on to our first night’s accommodation at the quaint and hospitable Bergonia Farm Stay. Things were about to get real and it was time to introduce Hi Ho Silver, as we had affectionately named the Disco, to the real roads of Outback Queensland. 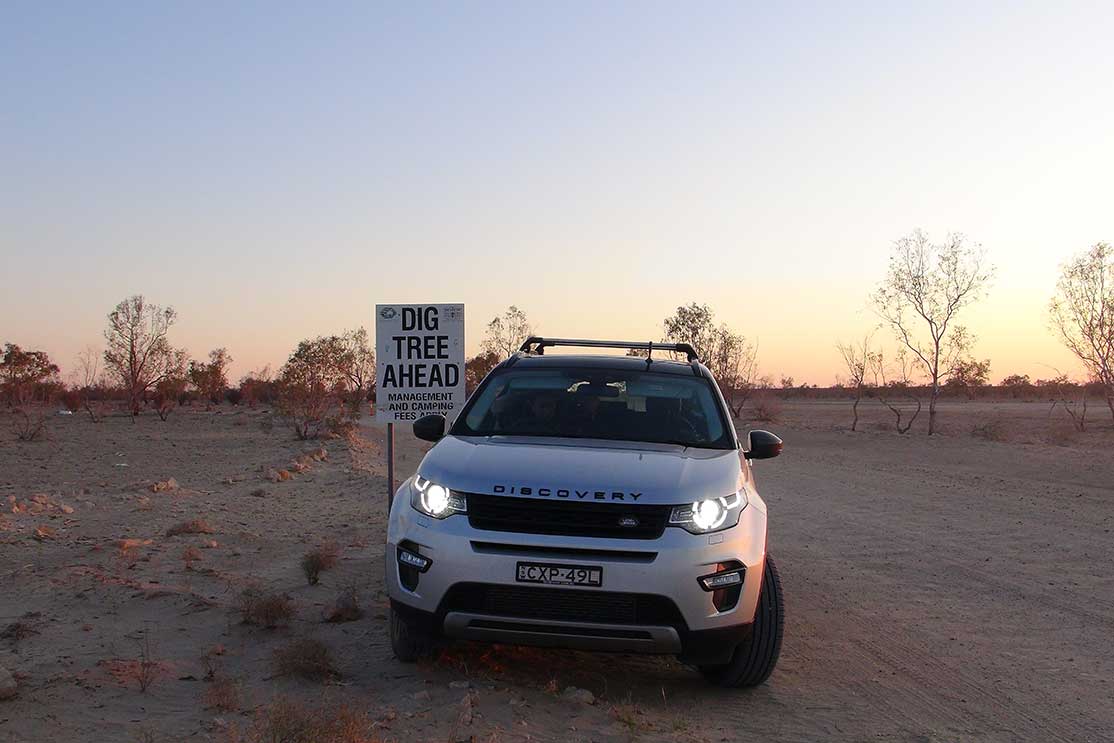 Following the footsteps of the sad tale of Burke and Wills to the Dig Tree.

To get to Birdsville, the Disco had to travel through Cunnamulla, visit the skin-tightening Eulo Mud Baths, pay respects to Australian explorers Burke and Wills at the famous Dig Tree, cross the South Australian boarder to Innamincka, and finally race along the Birdsville Track to beat the sun to the top of Big Red before reaching Birdsville for our beauty sleep at Tent City in preparation for a day at the races where we’d swap our Akubras for fascinators.

With each new landscape shifting from colours of yellows, browns and vibrant reds, the Discovery Sport coped with a prowess unexpected of a compact SUV. Land Rover’s Selec-Terrain system gave us confidence, but we found matching the settings to the terrain wasn’t always going to give us the most comfortable ride. At times, we found turning the system to general offered a nicer ride than the mud/ruts or gravel settings, even while driving through rutted out tracks or sandier patches.

It was the suspension and clearance (height from the ground) we thought would be a real issue on the Birdsville Track, which was probably the most hard-core off-roading we did on this trip, before the dunes. Like a self-fulfilling prophecy, we were almost certain we were going to blow a tyre. So sweaty palmed and butt clenched, we had to take it easier than we usually would have on the track. We were determined to get Hi Ho Silver to Big Red before dark. 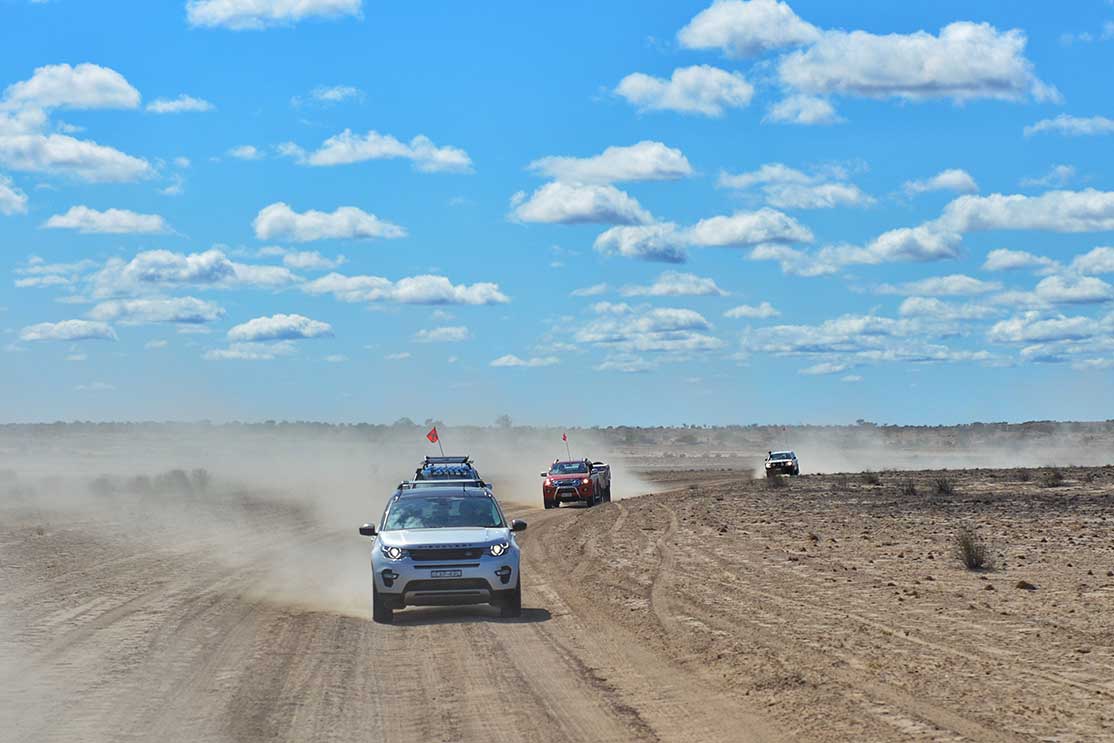 If it ain't got dirt, it ain't Australia. Photo: Reichlyn Aguilar

And as the sun was giving us its last leg of light, we made it through the swelling racing town, past the Birdsville Pub where a couple of country folk threw beer cans to the red-dusty floor and onto the track toward the entrance to the Simpson Desert.

So far the Disco had made it without harm, except for a small dent to the bonnet from a flying bolt off a camper trailer. We woohooed over the radio for a job well done and metaphorically patted our trusted steed on the back for making it this far. But we spoke to soon; a few clunky noises and an uneasy feeling saw us pull to the side of the road, hoping it was merely tumbleweed clinging to the car’s belly. Instead, as we had anticipated, we’d blown a tyre.

It was at this stage we had to make a decision – miss the chance to watch the sunset, or come back to change a tyre in the dark. It wasn’t a difficult choice; as the sun set behind the horizon, highlighting the spectacular colours of endless Australia’s desert landscape, the view from the top of Big Red stole our breath. Changing the tyre in the dark, however, was breathtaking for all the wrong reasons with Land Rover’s tyre-changing kit more complicated than we had expected. 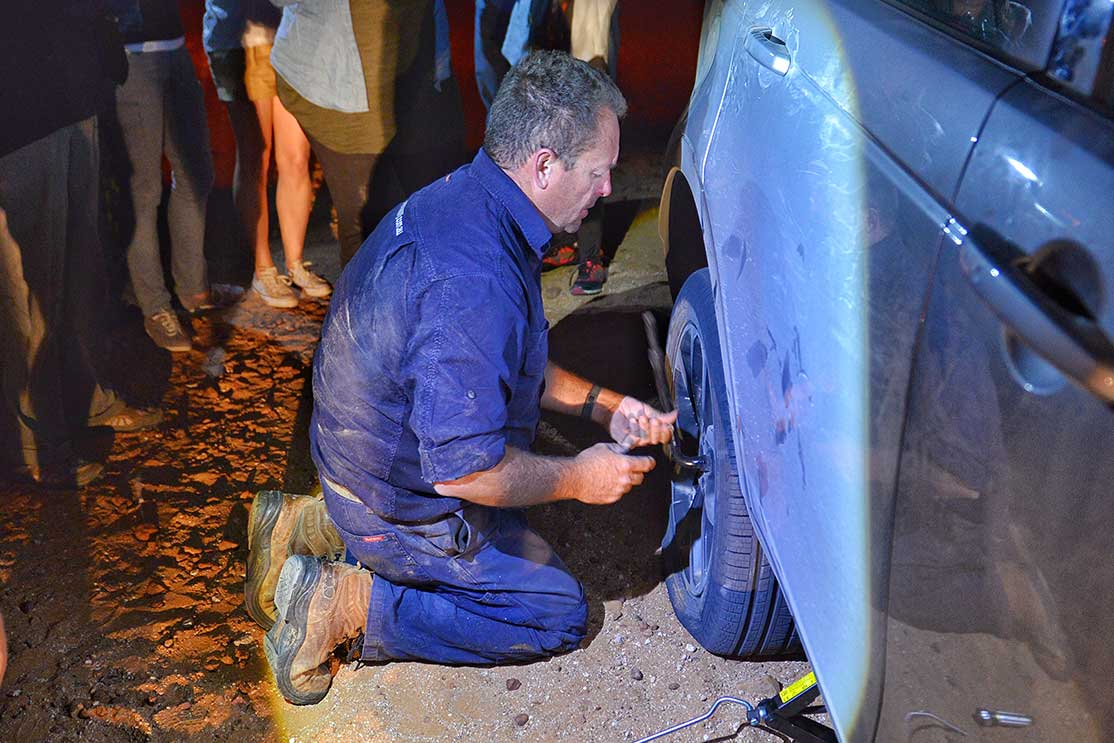 In hindsight, the burst tyre probably saved us from a humiliating bogging on Big Red and any disappointment from not ticking it off our bucket list was quickly cancelled out by a couple of wins at the Birdsville Races – not least of which was the opportunity of a few horsepower laps around the famous racetrack in the Disco Sport.

So to all the old blokes sitting around the campfire at Tent City, drinking their VBs and making jokes at the Disco and my expense (women can’t drive 4WD’s, you say?), take this as proof that you can’t judge a book by its cover and a Toorak Tractor can make it across this sunburnt country – all you need is off-road driving aids, appropriate tyres and a bloody good driver. 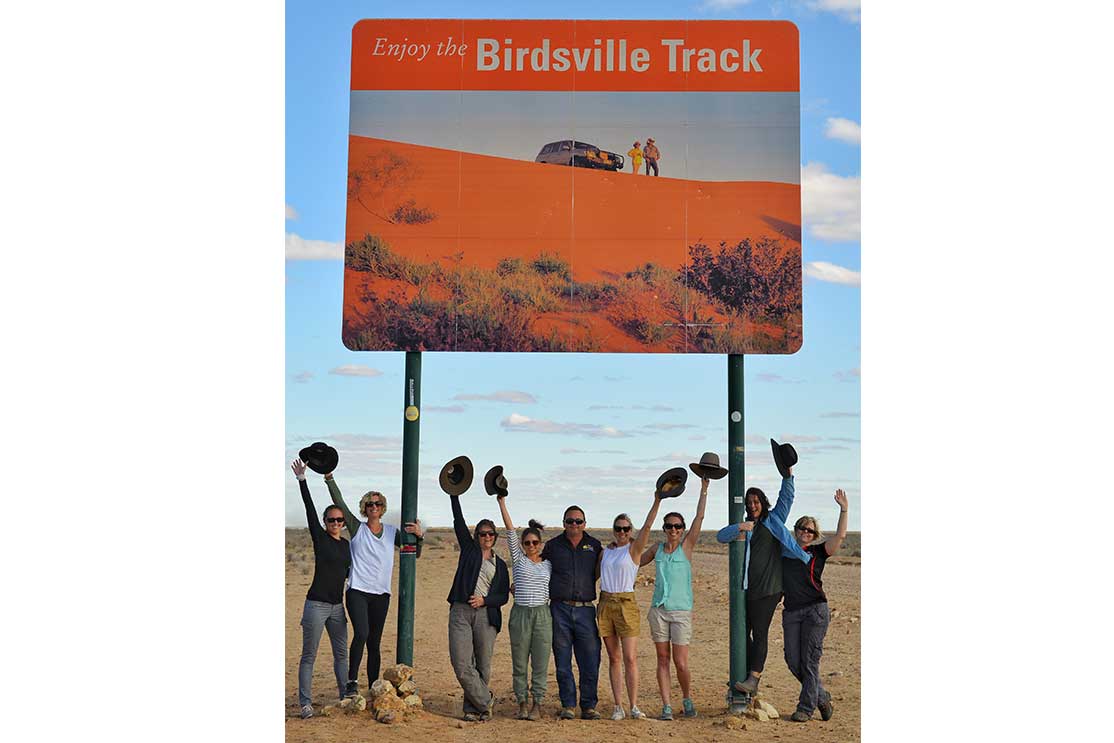 Akubra, 4x4s and a whole lot of Outback. What a way to travel. Photo: Reichlyn Aguilar

The annual Birdsville Races occurs on the first Saturday of September every year, when the little outback town of Birdsville has visitors from all over the country and the world. The trip there is just part of the fun, but it's the town's outback hospitality that'll have you wanting to return.

Special thanks goes to our trusty guides from Australian Offroad Academy. If it wasn't for the off-road savvy Dave leading our convoy, we'd probably still be stuck at the base of Big Red with a flat tyre, or left wandering the Aussie Outback.