As the humble Corolla turns 50, we take a look at where it all began, and how the best-selling nameplate has evolved – 40 million cars later.

It all started in 1966. Post-war optimism was in the air and Japan’s industrial momentum was in full swing. It was then that Toyota gave birth to a new small car and what would eventually be the most successful line of passenger vehicles in the world. The Corolla, meaning “crown of a flower” made its way to Australia in June of 1967 and received instant local acclaim. 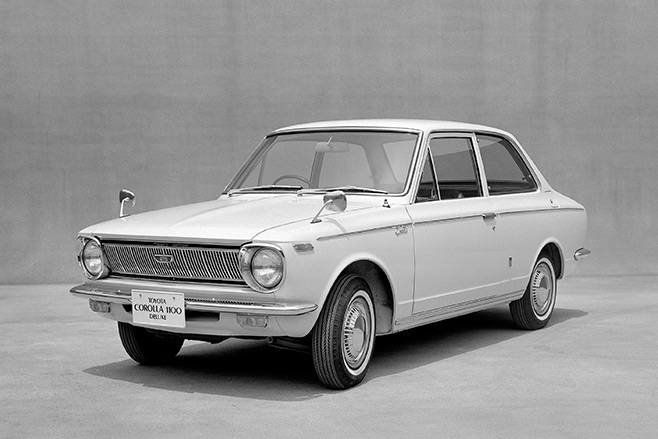 The little Toyota was one of the first Japanese imported cars to really make waves here in Oz. Up until the late 60’s, the modest Australian was (for the most part), restricted to either big-and-heavy or English-and-unreliable car options. The Corolla was priced competitively, was easy to drive and was consistently reliable. No, it wasn’t winning a drag race any time soon.  But for efficient and stylish transport, the Corolla was hard to beat.

The car entered the market as a two-door sedan with a 1.1-litre engine. But before long, Australian assembly of the Toyota began and more versions were added to the range. Various body styles quickly became available, as well as different engine and trim options. 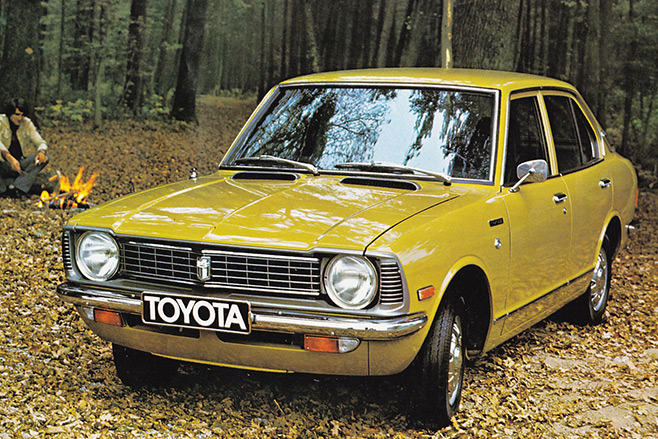 The second generation ‘Rolla was exteriorly and interiorly much larger than its predecessor. As demand grew, the car became available as a four-door wagon, a coupe and even a panel van.  By 1974, the Toyota Corolla was the best-selling car in the world. 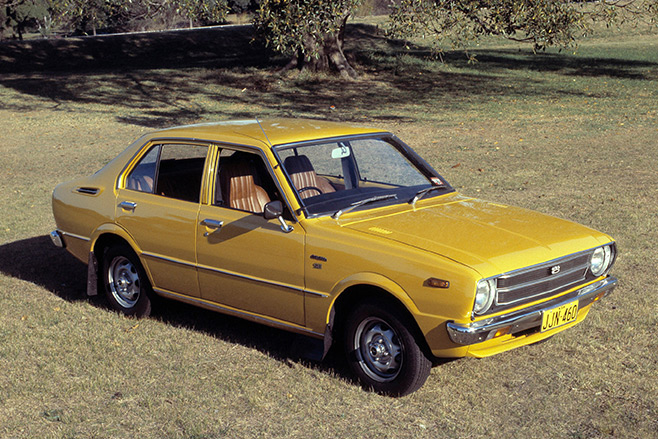 Hot on the heels of the brand’s ‘best-selling’ title, Toyota released the third generation Corolla. In keeping with the trend, the new car was significantly bigger than its predecessor. With added size came added weight, and the small four-cylinder motor struggled to keep up. Fortunately, in 1978 Toyota responded to this issue with a more powerful, 1.3-litre engine. 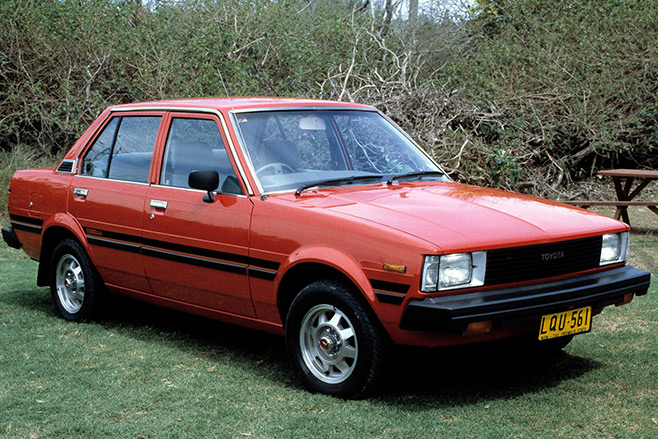 The fourth generation came with a whole lot of new advancements. Weight and size increased again, but so too did the level of safety tech and durability. The car was far more spacious, comfortable and was an all-around more refined version of the well-established Corolla brand.

In 1983, the fourth-gen Corolla was heavily upgraded. Body styling changed, new cabin trim was featured, handling was improved and the option of a more powerful engine was added. 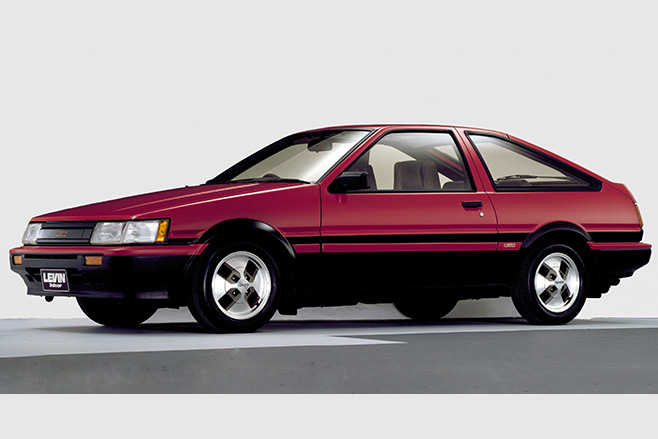 Up until 1985, every Corolla was rear-wheel-drive. The fifth generation of Corolla saw most of the range switch to a more cost-effective front-wheel-drive layout, along with many other similarly budget-conscious vehicles. However, the Corolla Sprinter released in 1986 remained rear-wheel drive and became arguably the most notable Corolla ever. It was a top-of-the-line model, introduced in Japan with the most powerful engine yet; a twin-cam 1.6-litre motor with fuel-injection. To handle the added grunt Toyota added upgraded brakes and suspension. Its chassis code was AE86, was later referenced by the release of the Toyota 86 sports car. Australian versions were not as powerful but remain sought after today. 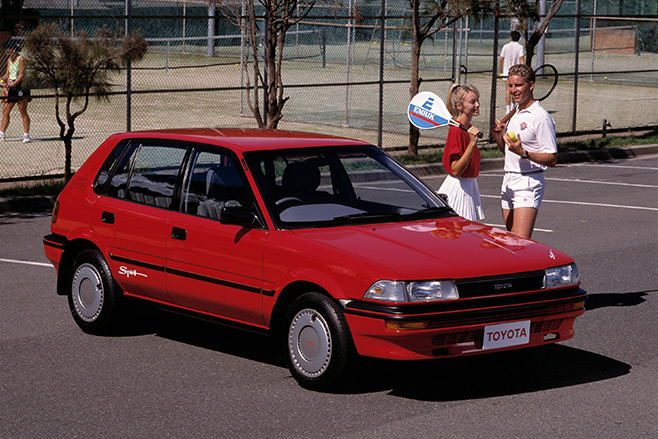 When the new Corolla was released in 1989, critics lauded it as one of the best yet. This is mostly thanks to the settling of fuel prices at the time, allowing Toyota to use beefier engines. This was the first all twin-cam range. 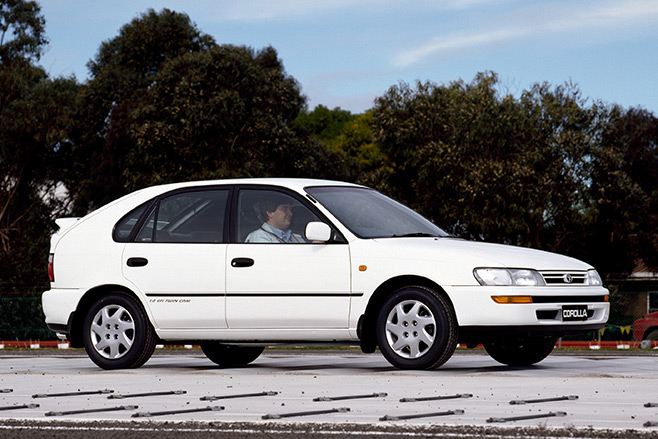 Although the next generation Corolla was late to arrive Down Under, it was the first to be built in Toyota’s high-tech Altona factory in Melbourne. Thanks to Toyota’s ‘trickle-down’ philosophy, this model sported many Lexus-derived developments that aided in comfort and durability. As a result of the brand reshuffling models, this was the last generation of its kind to be built in Australia.

By this time, the Corolla nameplate had overtaken the famous Volkswagen Beetle, and become the best-selling car in the world. Not bad, huh? 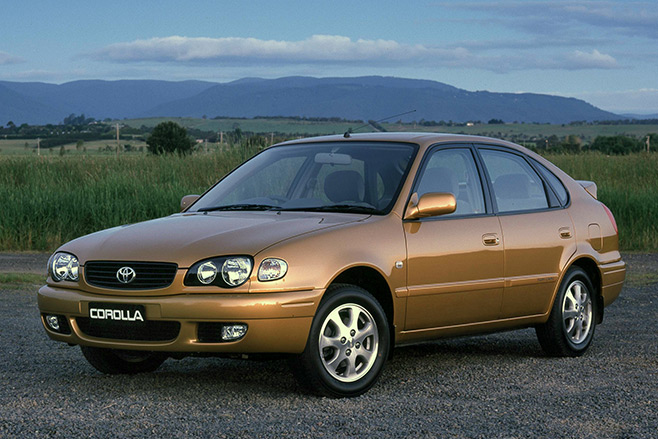 In the late ‘90s, Japan’s car industry was heavily affected by the recession. This forced Toyota to cut costs from its new Corolla. The new car was essentially a re-skinned version of its predecessor and was quickly recognised as such. Fortunately, as the last locally built Corollas left the showrooms, Toyota brought in more models, and extended the range. Some very competitive pricing reinforced the Corolla as a popular choice against its rivals. 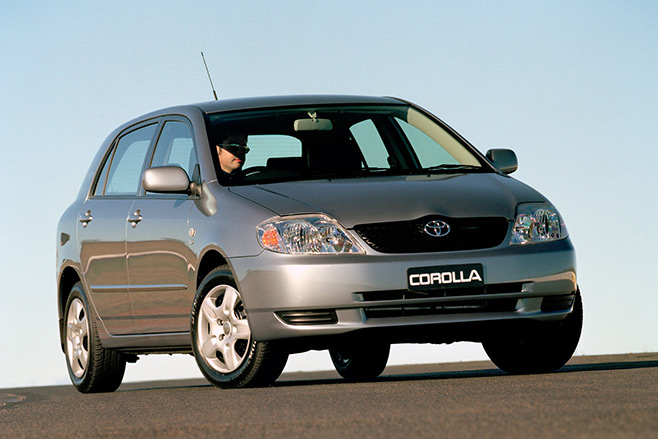 In 2001, the Corolla took on a new shape and style. Toyota reinvented the car, and in turn, reaffirmed its place in the market. The ninth generation came with comforts like power steering, central locking, power mirrors and airbags as standard. It was also much faster than a Corolla had ever been. This was accentuated by the later arrival of the Sportivo variant that was loaded with go-fast and look-good bits like big alloy wheels, side skirts and a powerful 1.8-litre engine. Despite no longer being built locally, the car outsold the Aussie-made Holden Astra with ease. 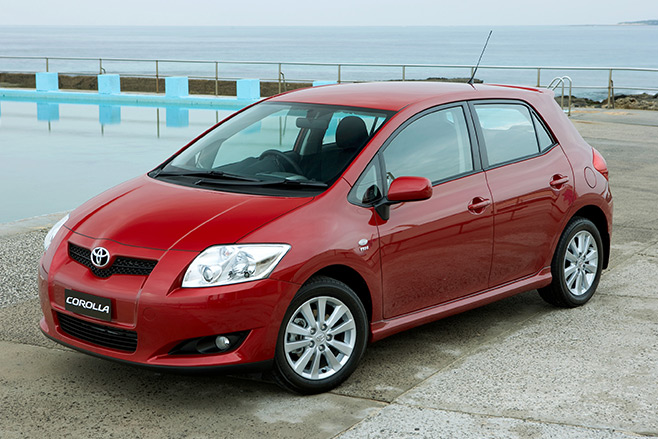 When the tenth generation landed, Toyota set its sights on the premium end of the small car segment. The Corolla competed with cars like the Mazda 3, the Ford Focus and the Honda Civic. The car was still sold in hatchback and sedan variants, but a wagon option was no longer available.

Safety was a big feature with this generation. Dual airbags and ABS brakes were standard, and an ‘Enhanced Safety Pack’ was made available. Those fitted with this pack scored a five-star European NCAP crash test result.

As the technology became available, the Corolla adopted features like MP3-capable sound systems with Bluetooth and USB/iPod connectivity. Higher-spec models even came with a 4.3-inch colour screen. 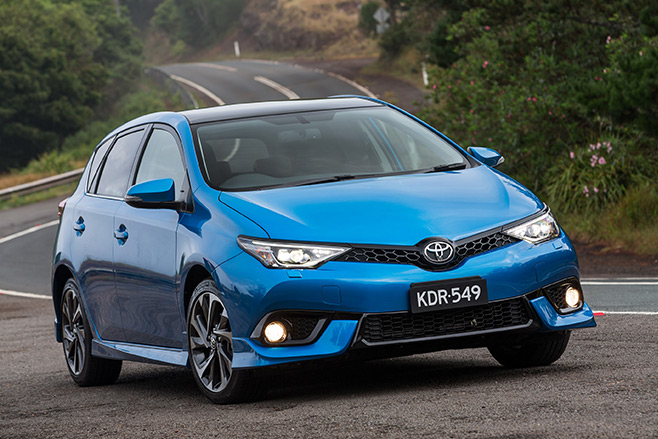 That brings us to the latest and greatest. Launched in 2012, the current generation has been updated externally since then, though in all guises it looks much sportier than ever before. The current car is equipped with all the creature comforts you’d expect from a modern car, and has been awarded a five-star ANCAP crash safety rating. For more information, check out our review of the latest Toyota Corolla.

After half a century, and over 40 million sales worldwide, the Toyota Corolla is still going strong. While it may not be the most romantic vehicle out there, the Corolla has always remained true to itself. It has consistently done what it has set out to achieve, and there is beauty in that. Here’s to another 50.