The 12th-generation Toyota Corolla brings all the necessary ingredients that have long made it the world’s most popular car but in a stylish package that’s considerably more fun to drive than its ‘beige’ predecessor thanks to a dynamic chassis and locally tuned suspension.

Having to pay more for an entry-level Corolla. The Ascent spec grade, which kicked off the previous model range, has been deleted with the line-up now starting with the Ascent Sport that costs about $2700 more.

Not being able to fit much in the hatchback’s 271-litre boot, which holds less than most smaller light-segment hatches including the Toyota Yaris. The sedan has far more useful 470-litre boot space. 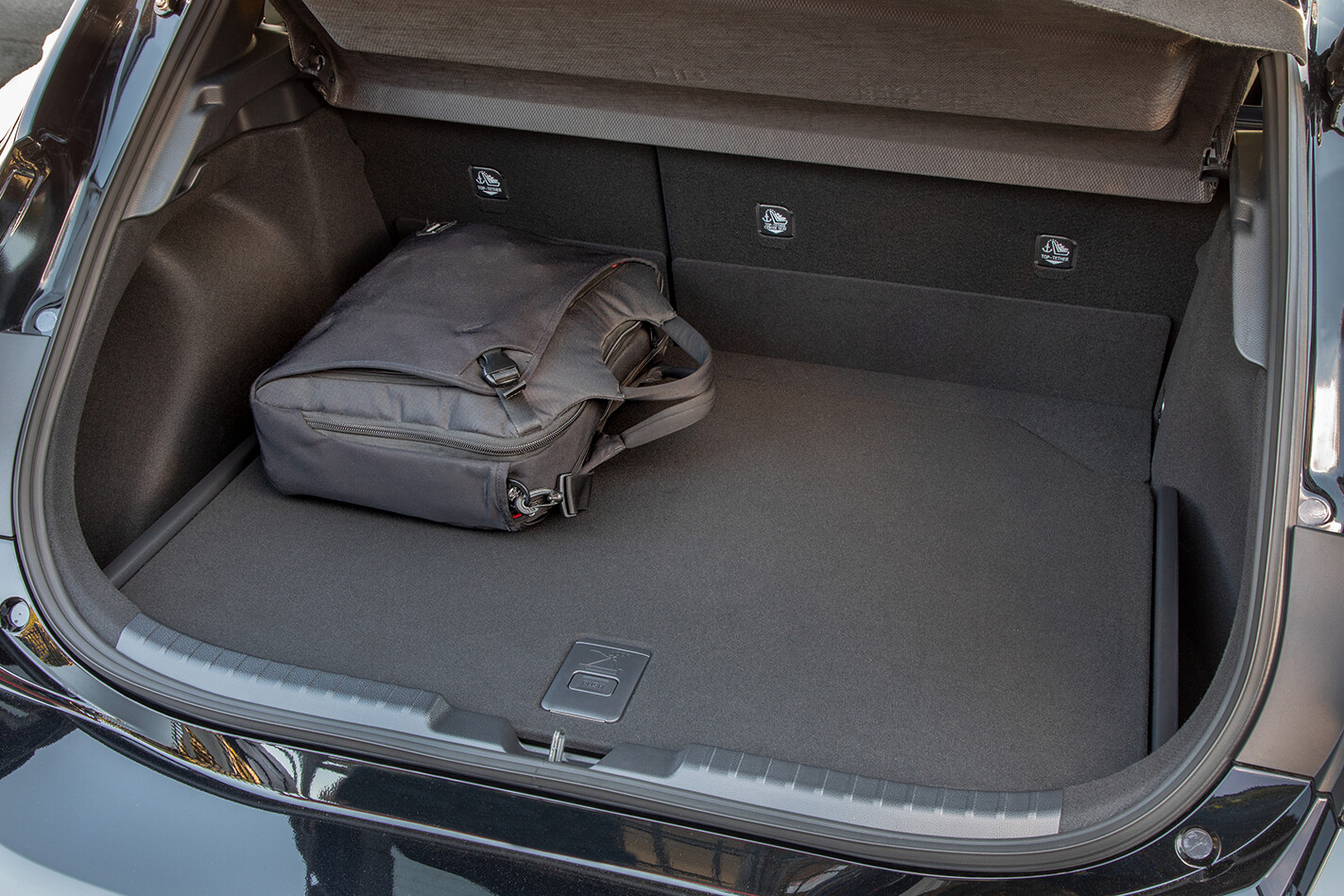 Complaints from the hatchback’s rear seats due to a lack of head and legroom, despite this model having a 40mm longer wheelbase than before.

The Corolla is classed as a small car, lower priced.

What features do all Corollas have?

Which engine uses the least fuel, and why wouldn't I choose it?

The hybrid Corollas naturally use the least fuel. On the official test, the hybrid consumes just 4.2 litres/100km (city and country combined) in the hatchback and just 3.5 litres/100km in the sedan.

The hybrid augments a 1.8-litre, four-cylinder petrol engine with a battery-driven electric motor. When you brake, it reclaims energy that is normally wasted, using it to recharge the battery and hence to propel the car. That makes a big difference to fuel use, and particularly around town where you’re braking a lot. The hybrid powertrain is available across all specification grades except for the ZR sedan. One reason you might not choose it is that you don’t want the cost or complexity of its petrol-electric drivetrain. And, unlike the previous model, the hybrid isn’t the best powertrain in the range in terms of driving pleasure.

One reason you might not choose it is that you don’t want the cost or complexity of its petrol-electric drivetrain. And, unlike the previous model, the hybrid isn’t the best powertrain in the range in terms of driving pleasure.

Every other Corolla uses the new 2.0-litre, four-cylinder petrol engine that feels a lot more vibrant than the hybrid. In all versions, it comes coupled with very good automatic transmission, with the Ascent Sport also available with a six-speed manual gearbox.

The 2.0-litre petrol has the highest thermal efficiency of any engine currently in production, which means it can extract 40 percent of the latent energy in every litre of fuel it burns, resulting in good power and frugal fuel consumption of 6.3-litres/100km with the manual gearbox, 6.0-litres/100km with the automatic transmission.

Automatic Corollas, including the hybrid, use a CVT (continuously variable transmission). Unlike other CVTs, which sound like they are over-revving as they seamlessly cycle through the gears, the unit in the 2.0-litre petrol Corolla steps through gears like a conventional auto.

The least costly hatchback, the Ascent Sport, with the 2.0-litre engine and manual gearbox rolls on 16-inch alloy wheels, has cloth seats, manual air-conditioning and a six-speaker sound system. The petrol Ascent Sport is also the only Corolla with a full-sized alloy spare wheel option.

The Ascent Sport Hybrid has all of the features found in the petrol Ascent Sport, plus dual-zone air-conditioning, and smart keyless entry that doesn’t require you take your key fob out of your pocket or bag. The Ascent Sport hybrid has a space-saving temporary spare wheel.

The range-topping Corolla ZR brings sportier 18-inch alloy wheels with lower-profile tyres. The petrol ZR has a space-saver spare wheel, the ZR Hybrid hatchback has a puncture repair kit – the ZR Sedan only comes with the petrol engine.

The most expensive Corolla, the ZR brings sportier 18-inch alloy wheels with lower-profile tyres. The petrol ZR has a space-saver spare wheel, the ZR Hybrid a puncture repair kit.

The ZR’s seats are trimmed in a combination leather and fake suede. The sports front seats are heated, with the driver’s seat equipped with lumbar support.

The ZR also has a head-up display that shows information like your speed and sat-nav directions on the windscreen at eye level. Music is more enjoyable via an eight-speaker JBL sound system.

The lower-profile tyres fitted to the ZR hatchbacks ride a little more roughly than those on the other Corollas and may cost more to replace.

The best-equipped sedan, the ZR, does not have a hybrid option. All Corolla versions apart from the Ascent Sport petrol miss out on a full-sized spare wheel. Most of the others make do with a skinny space-saver spare that has a recommended top speed of 80km/h, while the ZR Hybrid has a puncture repair kit.

The Hybrid versions aren’t as lively as the 2.0-litre petrol versions.

The only standard colour is Glacier White. The other seven colours cost extra.

How comfortable is the Corolla?

Toyota has put a greater emphasis on cabin design with its 12th-generation Corolla. The design is clean, handsome and ergonomically sound. Build quality is hard to fault and the materials used also have a high quality feel – even the harder plastics of the most affordable Corolla, the Ascent Sport. The cloth upholstery also feels durable and comfortable.

That said leg and headroom is pretty tight in the back seats of the hatch, despite this Corolla having a 40mm longer wheelbase than its predecessor. The sedan, on the other hand, is quite roomy for a small car, with plenty of head and legroom in all seats for adults. 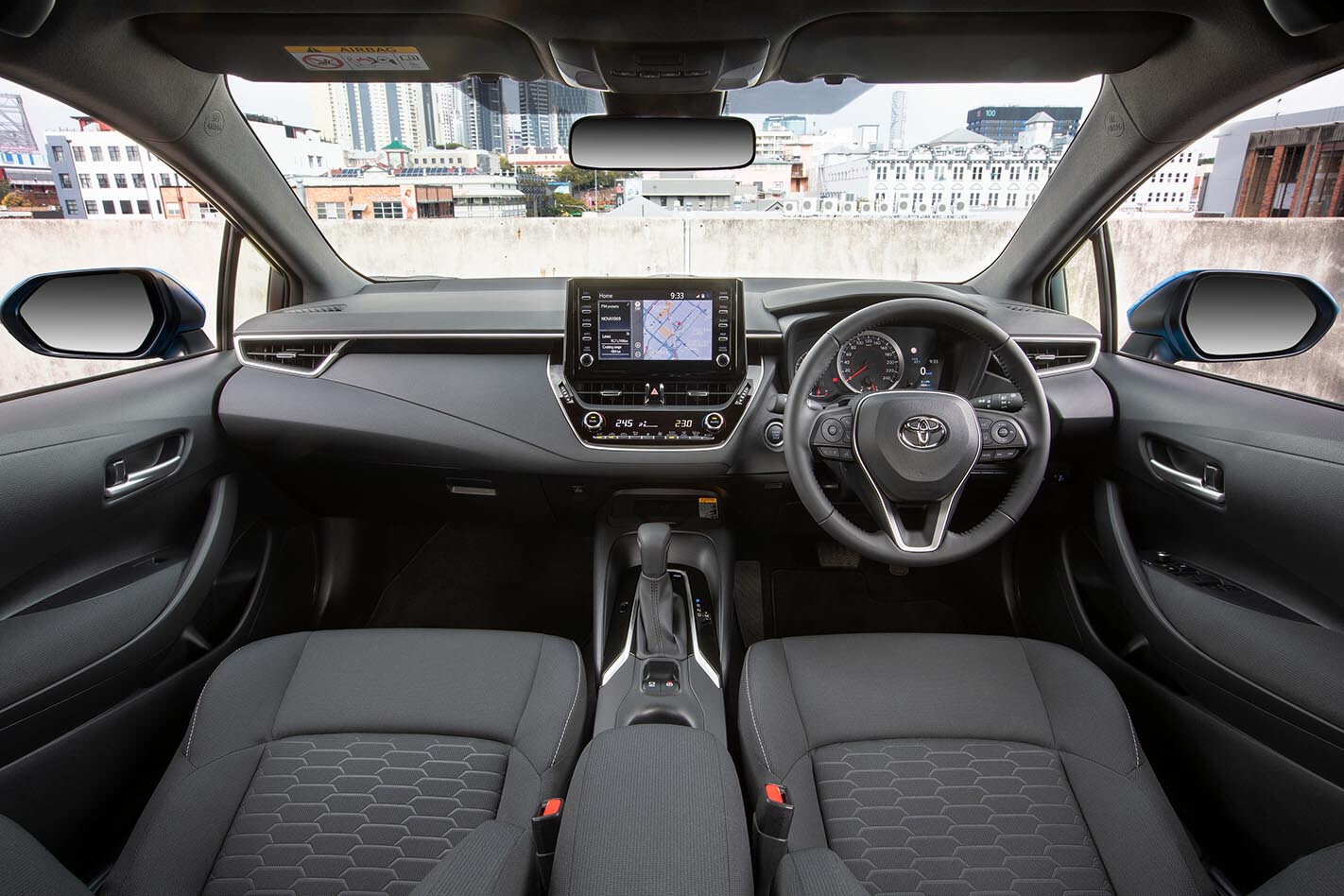 Infotainment is via an 8.0-inch touchscreen, with satellite navigation available as standard in SX and ZR Corollas.

The new Corolla excels when it comes to handling variable road conditions. Its more advanced multi-link rear suspension handles lumpy rural roads in a composed manner. It’s also very stable around corners thanks to the well-balanced chassis and nicely-weighted and direct-acting steering.

What about safety in a Toyota Corolla?

Seven airbags, stability control, a reversing camera, and rear parking sensors, contribute to a respectable safety picture in any Corolla.

There are two airbags directly in front of the driver and front passenger; one beside each front occupant to protect their bodies from side impacts; and a curtain airbag down each side of the car at head level to protect occupants front and rear from side impacts. Finally, there is an airbag at knee level for the driver. The SX and ZR also have a blind-spot monitor that lets you know if there are any vehicles on either side of your Corolla so you don’t cut them off when changing lanes.

The Corolla’s reputation for bland driving dynamics doesn’t apply to this model. It has been re-built from the ground up on a new longer and wider and stiffer chassis with a sophisticated new multi-link rear suspension.

The highly-efficient 2.0-litre petrol engine is the most powerful engine for its size without a turbo and, coupled with the CVT automatic, is the pick of the Corolla’s powertrains. While CVT autos usually have a sluggish rubber-band feel, the Corolla’s has a ‘launch gear’ that steps through the gears like a traditional automatic gearbox. This helps the Corolla take-off sharply from a standstill, while also providing any urgent demand for acceleration while on the move, such as when overtaking. 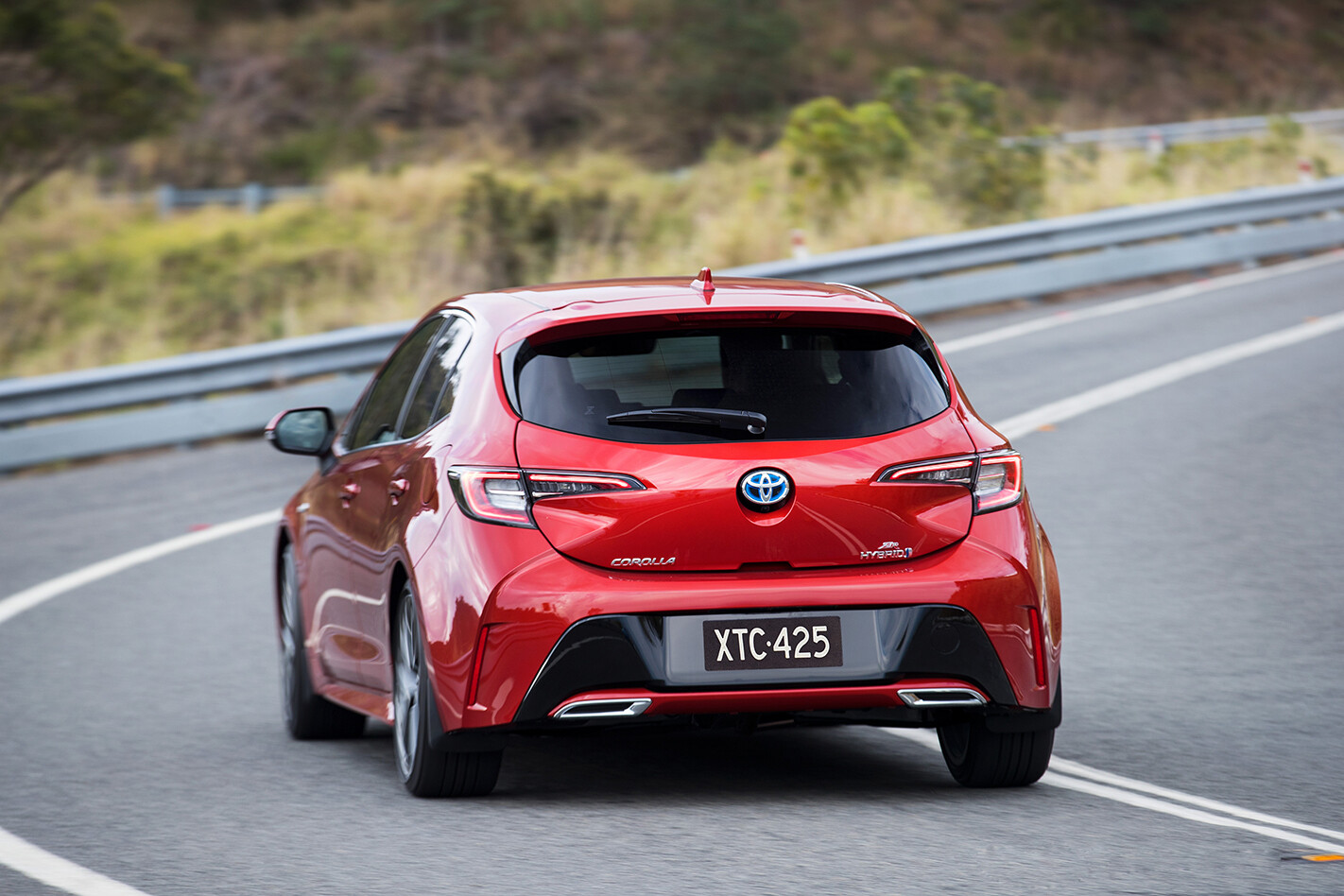 The CVT also works well when putting the gearbox in manual mode and using the steering-wheel-mounted shift paddles, should you feel like a little more hands-on driving.

That’s a good thing because the six-speed manual available with the Ascent Sport is a little disappointing. It has a nice shift action that’s undermined by an imbalance between the clutch and accelerator that makes smooth gear shifts difficult.

The hybrid, which uses a smaller 1.8-litre petrol engine and a different CVT unit with a view for greater efficiency, doesn’t feel as dynamic.

The Corolla hatchback has a 40mm-longer wheelbase than its predecessor, which would normally translate into a significant improvement in legroom. Unfortunately, that’s not the case in the back row. While the front seats are spacious and deliver superb comfort, the rear seats lack knee room and headroom. That’s a shame because the rear bench is actually shaped very well and offers good support for a pair of adults.

The sedan, on the other hand, is impressively spacious, with plenty of head and legroom in all seats for adults. 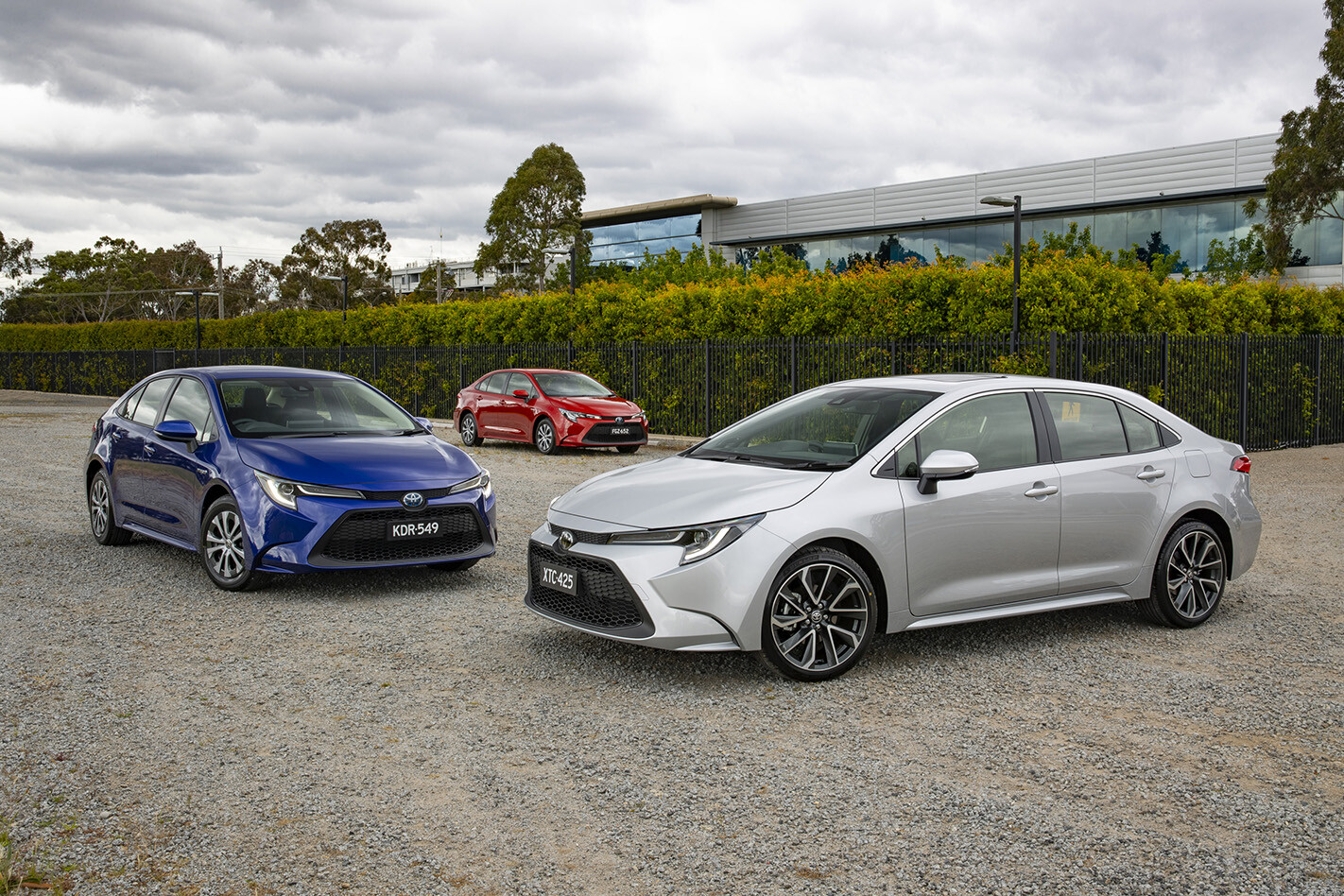 The absence of rear air vents in the Ascent Sport and SX is also a negative, given they’re available in the ZR grade.

The Corolla’s hatchback's superior driving dynamics seems to have been achieved at the expense of practicality. Opening its lightweight plastic hatch reveals a tiny boot measuring just 217-litres in all but the Ascent Sport with tyre repair kit, and ZR Hybrid.

The ZR Hybrid’s boot holds 333-litres because it is equipped with a puncture repair kit that does away with the bulky spare wheel under the floor. That’s still 27-litres less than the previous model Corolla, and smaller than key rivals such as the Hyundai i30 (395-litres) and Volkswagen Golf (380-litres).

And you'll be stuck for a while if you get a puncture.

The Corolla sedan has no such issues has a much more practical 470-litre boot, which is the same as the previous model. That’s a massive jump of 253 litres on the Corolla hatch and only 25 litres less than the bigger Camry. Plus, you’re not disadvantaged by going hybrid, either, as both engine types gain the same litre count and 60/40-split rear seats.

Where does Toyota make the Corolla?

Corolla hatchback and sedan models – including the hybrids – are built in Japan.

Perhaps swifter overtaking from a turbocharged engine. The Volkswagen Golf, Ford Focus and Renault Megane offer this, for example.

A bigger boot and more rear legroom as found in the Golf, Astra, Focus and Hyundai i30, Honda Civic, and Skoda Octavia.

A more practical wagon version, as available with the Focus, Golf and Octavia.

Possibly the all-weather security of all-wheel drive, standard on a Subaru Impreza.

Other small car rivals you may want to consider include the Mazda 3, and Kia Cerato.

Are there plans to update the Corolla soon?

The 12th-generation Corolla Hatch went on sale in July 2018 with the 2.0-litre petrol and hybrid versions.

Apple CarPlay and Android Auto were added to the Toyota hatchback’s infotainment system in October 2019. Current model Corollas purchased before then can have the system retrofitted.

Unless performance is at the top of your list, it’s hard to go past the economic hybrid versions, with the mid-priced SX being our pick of the bunch in terms of value and features.

The sedan is your best bet if you require a practical boot space and need to ferry people around - we reckon it looks pretty good too.