After a seemingly endless number of new eighth-generation Golf models over the past year, the headlining 2021 Volkswagen Golf R has finally arrived to complete the line-up.

It hasn’t landed in Australia just yet, and probably won’t until the second half of the year, but amid all the regulatory controls surrounding COVID right now, we managed to snare one of the first examples to head out of Volkswagen’s headquarters in Wolfsburg for an initial run in frosty German winter conditions ahead of its local debut later this year.

There is tradition here of course. The new model is the fifth Golf in 18 years to wear VW’s (newly restyled) Rennsport badge, and every one has been as memorable as those that went before it. A purebred pedigree.

But with five-door competition that now includes the Audi S3, BMW M135i xDrive and Mercedes-AMG A35 4Matic, the new Golf R will need to be very much at the top of its game to make a lasting impression. 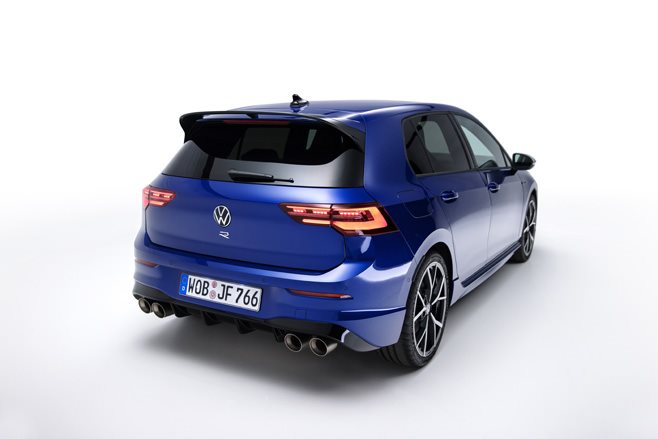 Up front, the latest uber-Golf runs a more powerful version of the familiar EA888 turbocharged 2.0-litre four-cylinder engine. With detailed changes, power peaks at 235kW with torque extending to 420Nm from 2100-5350rpm, making the new 1551kg R the most powerful series production Golf model yet.

By comparison, its direct predecessor offered 218kW and 380Nm, so this is more than just a token increase in reserves, giving the new model a power-to-weight ratio of 151kW/tonne. Of its rivals, it’s the new Audi S3, which runs the same engine in another state of tune, that gets closest to challenging the Golf R’s on-paper figures with 228kW and 400Nm.

Accompanying the reworked engine is an updated version of Volkswagen’s in-house seven-speed dual-clutch gearbox (DSG), which uses an upgraded auxiliary oil cooler and new software mapping for faster shift times. There is no manual gearbox option – Volkswagen says there isn’t sufficient interest in any of the Golf R’s key markets. 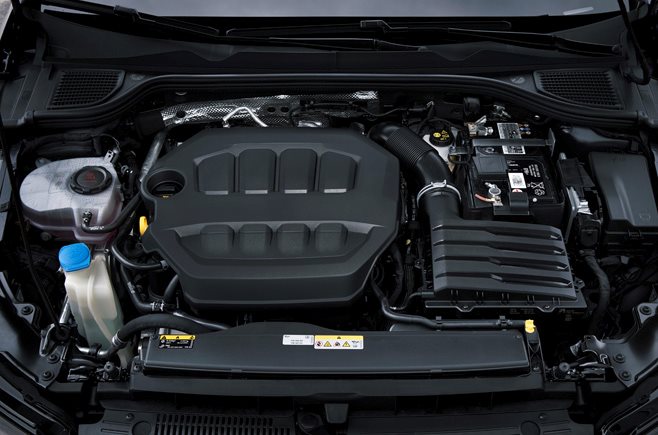 It’s the four-wheel-drive system, though, that has seen more significant changes. Produced by BorgWarner, it has been thoroughly re-engineered with the addition of a new central differential that provides a faster and more rear-biased apportioning of drive.

There’s also a new electronic rear differential among myriad other changes, bringing torque-vectoring qualities to the rear axle of the Golf R for the first time.

As before, there is an optional Akrapovic titanium exhaust system, as fitted to our test car. It doesn’t liberate any more power, but it does save 7kg and gives the new model a truly stirring exhaust note that is enhanced by a sound generator in any one of its more sporting driving modes.

Underneath, there’s a reworked MacPherson strut (front) and four-link (rear) suspension. The R rides 20mm lower than the regular Golf and gets Volkswagen’s excellent Dynamic Chassis Control with variable-rate dampers and an additional 1.3 degrees of negative camber at the front. 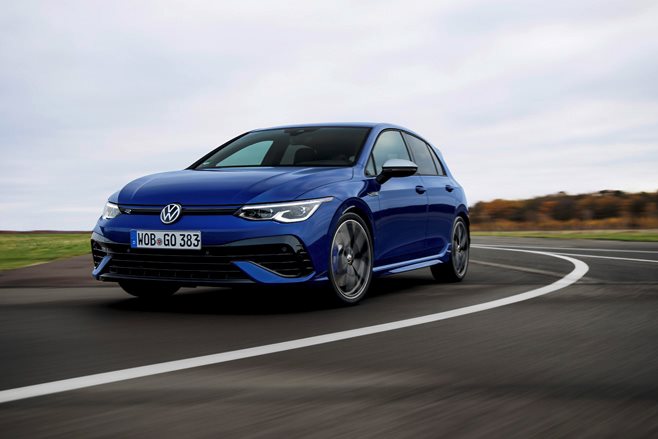 The chassis is networked with a so-called Vehicle Dynamics Manager (VDM). It aims to provide the new model with a more balanced feel, with less understeer and, thanks to a new driving mode that sends the majority of drive to the rear wheels, proper drift qualities.

Altogether, there are five primary driving modes: Eco, Comfort, Sport, Race and Individual. But in a development also brought to the Golf GTI Clubsport there’s also an additional ‘Nurburgring’ mode, which uses settings developed by Volkswagen on the notoriously demanding German circuit, where much of the new Golf R’s chassis tuning has taken place over the past two years.

The standard wheels, unique in their design, are 18-inch diameter, though our test car wears optional 20-inch wheels with 235/35-profile winter tyres. 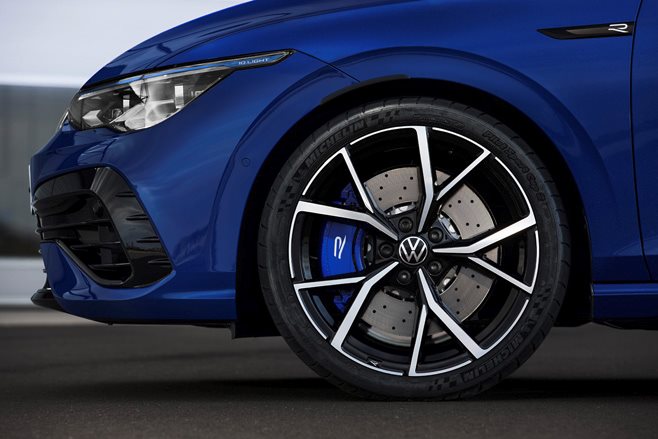 Other changes include a quicker variable-ratio steering rack than before, attached to the same upgraded front aluminium subframe as the Golf GTI, and also larger front brake discs with new two-pot calipers. The brakes also use a new master cylinder and, despite being larger than before, are 600g lighter at each corner.

Externally, the new Golf R is distinguished from other Golf models by a uniquely styled front bumper with a front splitter element and large lower cooling ducts. VW has also beefed up the sills underneath the doors, and at the rear there’s a prominent twin-plane spoiler atop the tailgate, plus a large three-channel diffuser bookended by two round tailpipes either side.

Step into the Golf R and you’re confronted by an interior that does its best to reflect the car’s sporting pretensions without deviating much from that of milder Golfs. There are standard-fit sport seats and sports steering wheel, steel-capped pedals and a series of unique digital instrument displays among other bespoke touches. 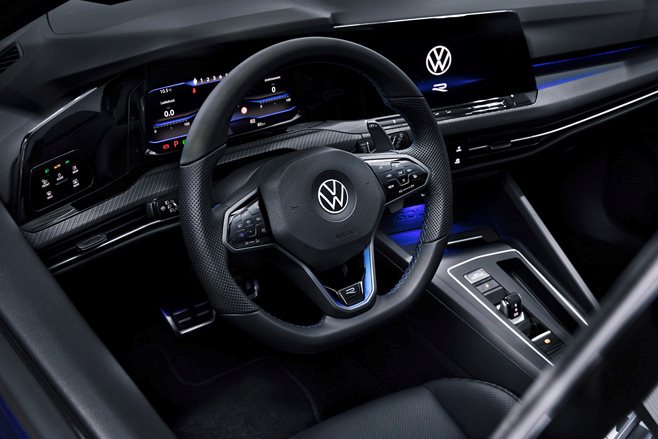 The new seats, with heavily sculptured squabs, are especially snug and quite supportive. They offer a good range of adjustment, allowing you to sit suitably low, and there is also plenty of adjustability in the steering column.

The dashboard is well built, though the shiny hard plastic on some sections does give it a slightly cheap look, despite the inclusion of more agreeable materials elsewhere.

Two digital displays deliver sharp graphics at high resolution, though the central infotainment display in our test car was infuriatingly slow to respond at times. 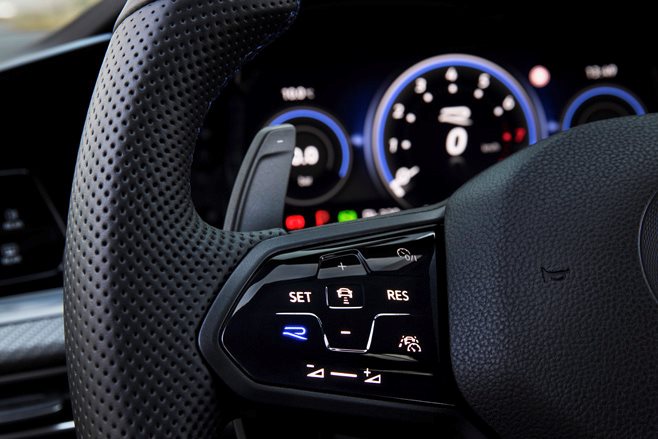 Which isn’t something you can say for the Golf R’s accelerative ability. With a 0-100km/h time of 4.7sec, the new model doesn’t match the claimed 4.6sec of its predecessor, but it equals the official times quoted for the BMW M135i and Mercedes-AMG A35, and comfortably beats the 6.2sec of the Golf GTI Clubsport.

And the Golf R also feels quicker than the figures suggest. The manner in which it launches from a standing start is nothing short of spectacular. Load it up with revs on the launch-control in Race mode and it explodes away. There’s momentary slip at the front wheels before the drive is properly apportioned, but from then on the driveline is tremendously effective at placing the Golf R’s reserves to the road.

Low-end response from the latest EA888 evolution is quite a bit sharper than before, after which the broad spread of torque makes it hugely tractive. Equally, it now revs more freely as it approaches the 6700rpm cut-out. And you get this breadth whatever the driving mode. 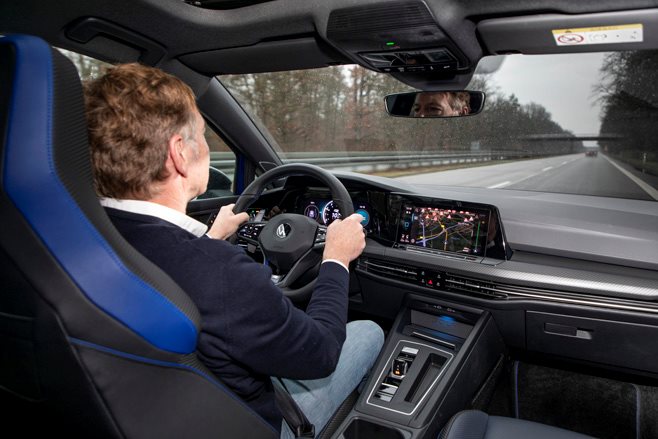 Neither does the process of selecting the most responsive mode feel so laborious. One press of the new R button on the left-hand steering wheel spoke instantly sets all the various functions – engine, steering, gearbox, all-wheel-drive system and dampers – into their most aggressively tuned state, at which the new Golf R feels deliciously responsive and eager.

The added urgency brought by the reworked engine is supplemented by an improved action to the DSG, delivering smoother and faster shifts, most notably on downshifts.

Indeed, the new Golf R delivers a good deal of feel and involvement – more so than in any previous incarnation. It is intense and engaging over any given road in the right driving mode. However, while the variable-ratio steering is very accurate, eager to self-centre and quite communicative, the lightness evident at lower speeds lingers, even when you’re pushing hard out on the open road. As confidence-inspiring as the new car is, it would be even more memorable with some meaningful weight to the helm. 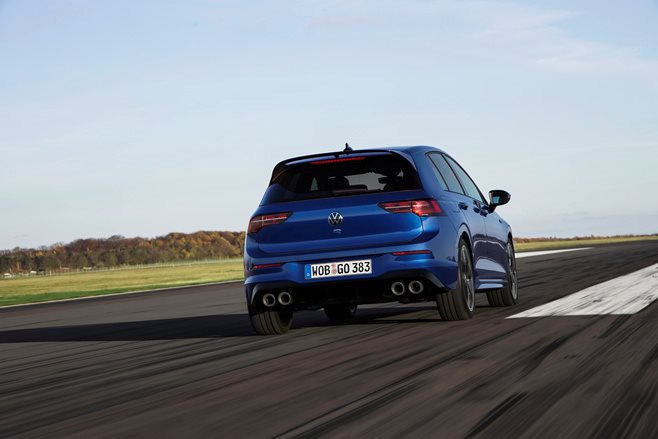 That said, the result of the new chassis tweaks is an almost total absence of understeer, even on winter tyres, for which the torque-vectoring system has to take some credit. There’s a brief moment of push at the front under power into tighter corners, but the Golf R is truly throttle-adjustable and hugely enjoyable to hustle along.

The outstanding grip is backed up by tremendous body control. Late and aggressive turn-in brings just a brief pause for thought before the VDM system nails the right level of damping force. The Golf R resists lean extremely well, remaining flat and eager as it scythes through corners and keeping pitch and dive well under control. It is this overall composure that defines the new model, and brings a more fluid but more agile feel than any previous Golf R.

As for ride quality, while the old R could be a little brittle over less than smooth roads, the new one brings genuine compliance in all but Race mode. This feels the most broadly usable Golf R there has ever been. 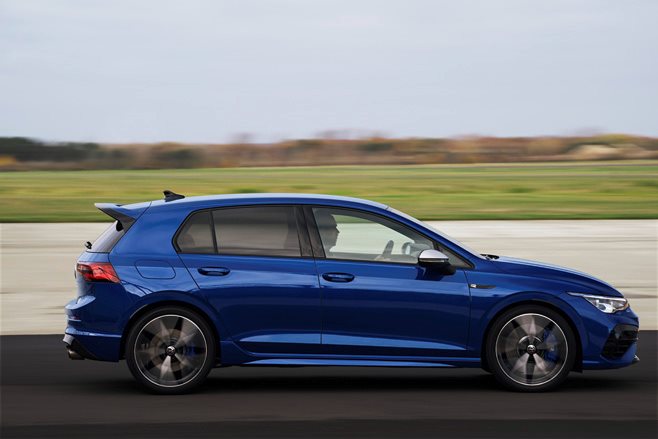 On first impressions, the new Golf R not only lives up to lofty expectations, but exceeds them. It is fittingly quick; perhaps not at the level of the current hatchback king, the Mercedes-AMG A45, but with the accelerative ability and sheer sense of occasion on open throttle to challenge the speed and attraction of all its direct rivals.

It is also a terrifically well-balanced car whose traction and on-the-limit exploitability is every bit as impressive as the tractability and ride. For outright performance and all-season appeal it rises above the new Golf GTI, and comfortably so.

The Golf R’s clever chassis technology brings a broader range of characteristics to the table than before. There’s greater compliance and overall comfort at the more relaxed end of the scale, but added response and even more impressive body control in the more sporting settings than its highly admired predecessor. 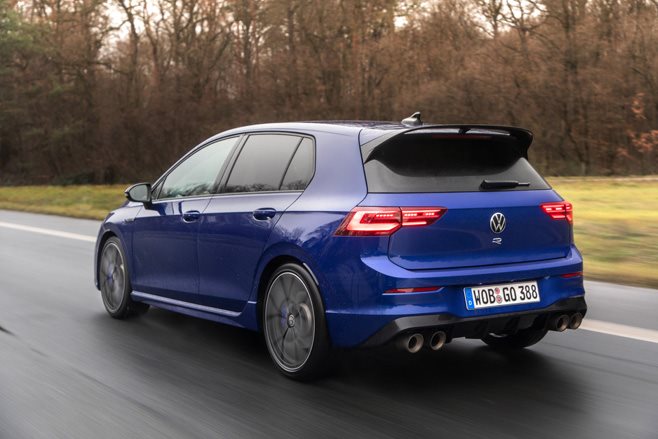