THE process of dreaming about, researching and tyre-kicking your next new car is filled with exciting possibility.

But actually laying your cash down at the dealership can snap you from fantasy into a grim reality of lacklustre retained values, wildly expensive insurance premiums, spiralling repayments and untold thirst for premium fuel.

What if you knew about the hidden costs upfront, because someone had crunched all the critical numbers, before drawing conclusions about how to best spend your hard-earned on a gleaming new car? That's where Wheels’ annual Gold Star Value Awards comes in.

In other years, Wheels has taken the cream of the crop across all the key car classes and broken each car down into key cost components such as annual fuel and depreciation costs before feeding the data into a clever set of formulae.

The only change to the formula this year is that, instead of taking only the best cars in each class, we’ve put all the cars on sale in Oz through our analysis.

Thousands of cars were tipped into the hopper, but just one winner in each of 21 classes – welcome Dual Cab 4x4 Utes for 2015 – is elevated to the top of the podium and presented with a coveted Wheels Gold Star Value Awards gong. 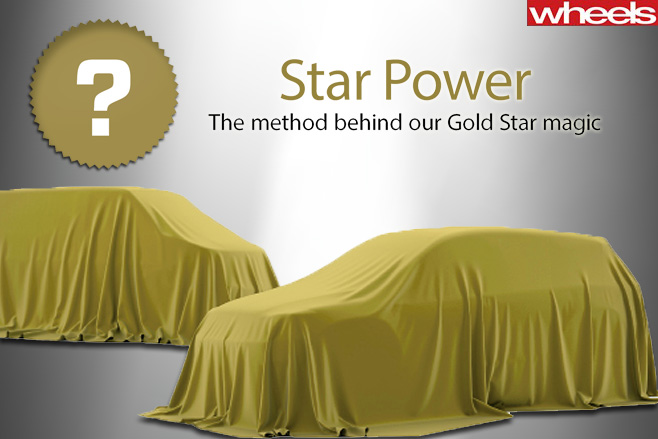 Class ceiling
GOLD Star Value Awards eligibility used to be capped at $150K, because the depreciation on cars beyond that far outweighs running costs. This year we instead let the formula take care of car selection. No big-buck cars came within an Aventador’s roar of the podium.

Depreciation
THIS is the biggest – and least considered – cost of new car ownership. Of the thousands of vehicles we evaluated, three-year resale value figures ranged from 36.9 percent (BMW i8) to 79.0 percent (Mazda 2 Neo).

Insurance
COMPREHENSIVE insurance quotes sourced from AAMI for a 35-year-old male living in Chatswood, NSW, Rating 1 for life, no finance, car for private use.

Fuel
ANNUAL fuel cost calculation is based on ADR combined-cycle consumption figures. Annual distance travelled is taken as the Australian Bureau of Statistics' average of 14,000km and actual fuel prices are used.

Purchase price
MOST new-car buyers set out with a budget in mind, so Gold Star cars is divided into consumer-friendly price brackets. The real cost of owning the car is depreciation, which is where price comes into the equation.

Real cost
IT'S relatively easy to put a representative number on the three years of depreciation, fuel and insurance, so the total of these equate to 80 percent of a vehicle’s score.

Service
WIDESPREAD fixed-price or capped-price servicing schemes should make it possible to compare car servicing costs. But there are still some brands or individual models without such. As a result, service intervals are scored. A 12-month interval (or longer) is likely to be be less expensive (and more convenient) than six- or nine-month intervals, so it gets maximum points. Cars with variable or ‘condition-based’ service intervals are also given full points.

Warranty
IF NOTHING else, a five-year warranty gives greater peace of mind than shorter ones. However, it’s impossible to put a hard cost on what an extra warranty is worth; it only saves money if and when something goes wrong. For that reason, warranty accounts
for 10 points out of 100.