Confession time... I had an absolute blast in the Abarth 124 Spider.

In fact, it was one of the few cars I snuck back out on track with for another cheeky session after testing was done. 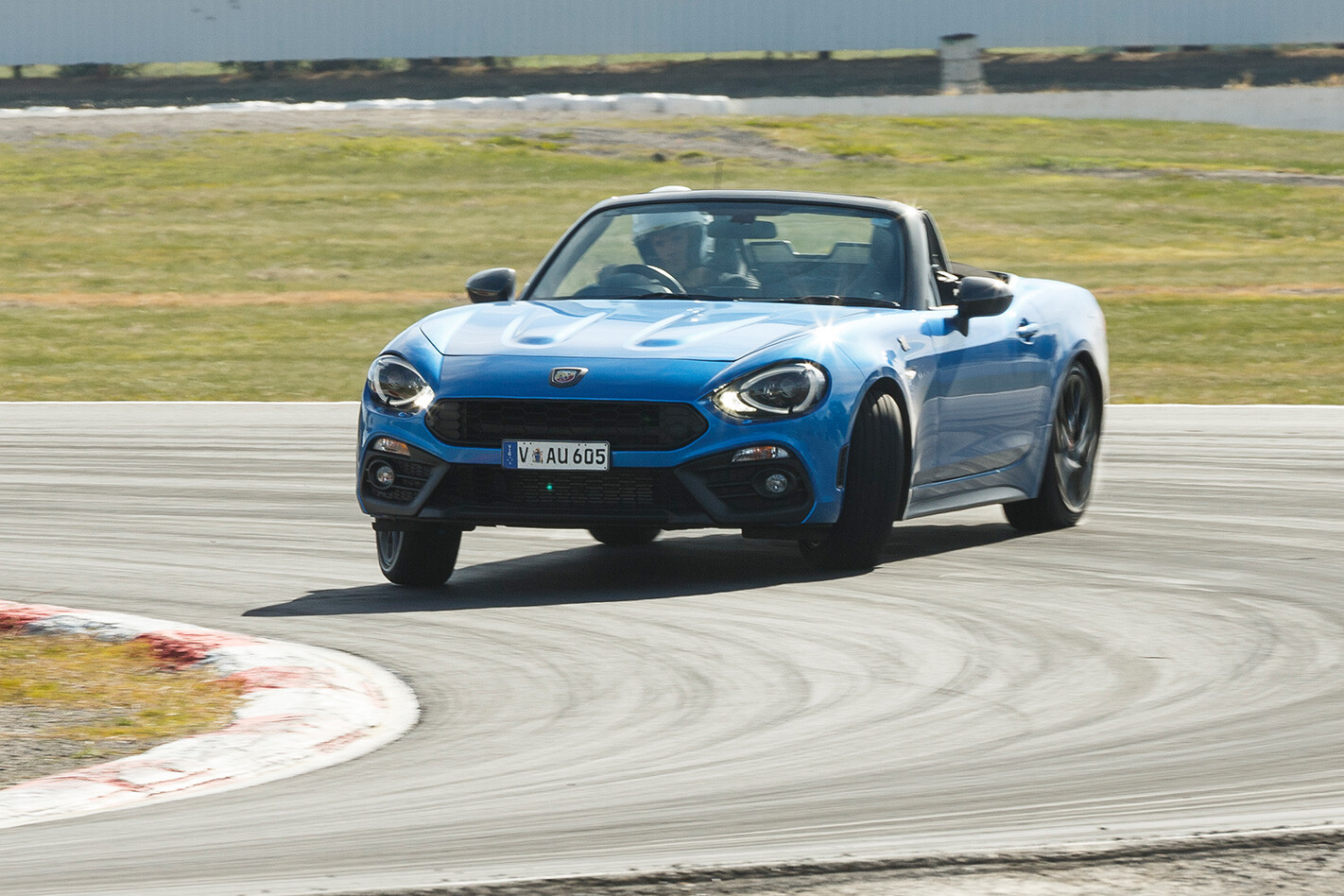 I’ve always thought the Mazda MX-5 – the car that, of course, underpins the Abarth – needed about 10 per cent more of everything to be truly brilliant, and the 124’s bigger Brembo-based brakes, well-decent Bilstein damper set, mechanical rear slipper and chunkier turbocharged engine bring that to the table.

Hell, thanks to a schnozz that would do a Roman proud, it even looks more resolved (apart from the fooling-no-one interior) than the Mazda. And yet... here we all are, discussing why the Abarth 124 Spider has come in second-last place. It’s a bit of a shock, actually.

How could this have happened? Numbers don’t lie. The data traces tell the tale – despite being one of the lightest cars on test at 1060kg, the 1.4-litre turbocharged Abarth’s relatively modest 125kW/250Nm isn’t enough for it to record less than seven seconds to 100km/h, or less than 15 seconds to 400 metres.

This poor showing right from the outset puts the Italian/Japanese hybrid on the back foot. The red ink isn’t done with yet, though. The Abarth logs the slowest 80-120km/h time and the fourth slowest lap time – albeit with the fastest speed at the apex of turn four with 97.9km/h and a competitive 66.1km/h at turn 10 – all of which help to bury the two-seater down the order in a competitive, keenly priced sub-$50,000 field.

In fact, its $41,990 sticker price hurts the Abarth the most, especially when it’s slower than a Toyota 86, which is a full $10K cheaper. It can’t even be saved by a set of judging scores that rank it in second place in the category. 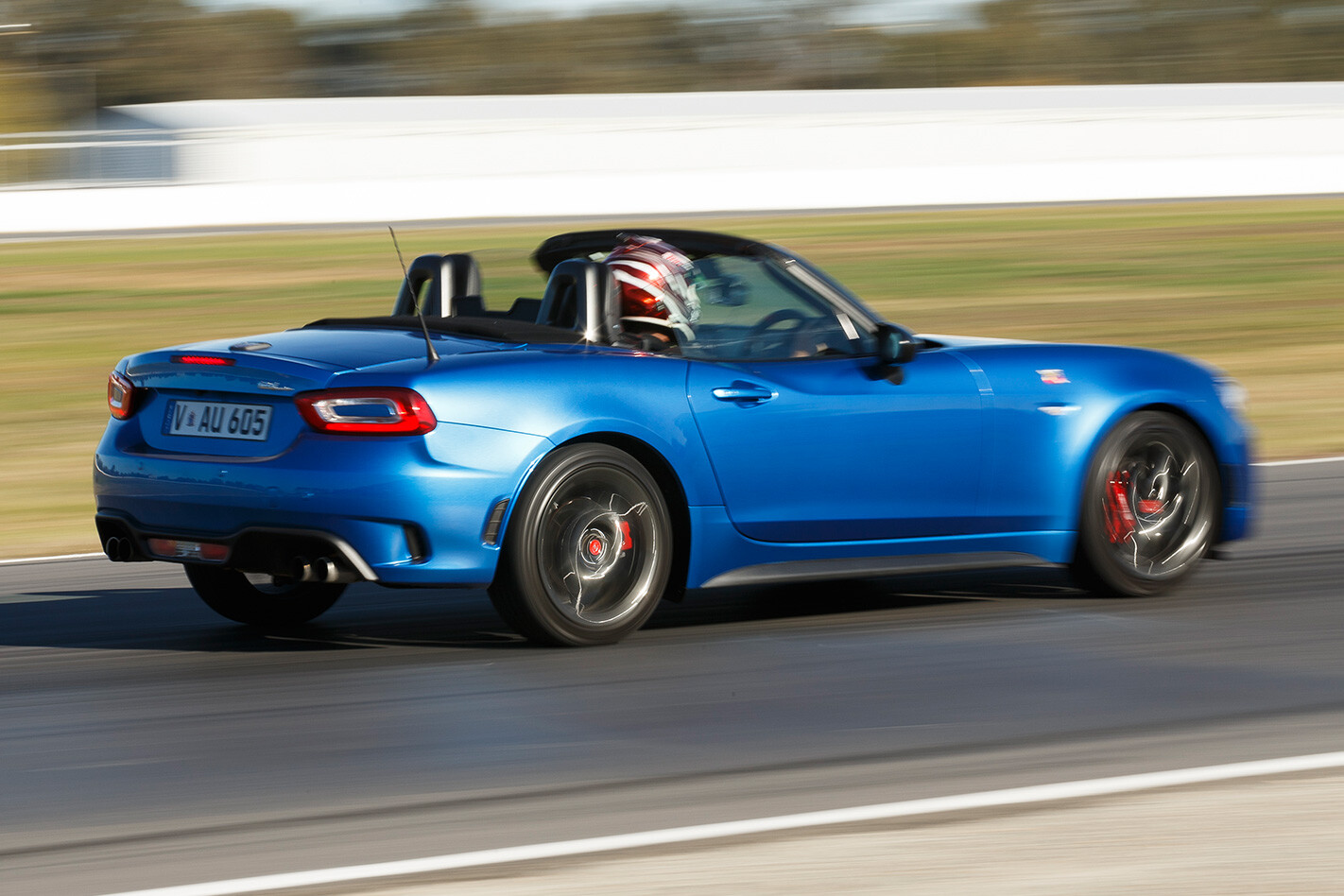 Second! No-one really had a bad word for it; its inherent balance may be more nose-led than the MX-5 it’s derived from, but that sweetly weighted steering and additional roll and pitch/dive stiffness give the svelte little chassis a genuinely fun edge, while its optional Monza exhaust system gives the at-times lacklustre MultiAir engine character.

The extra 50Nm over a 2.0-litre MX-5 don’t hurt, either, as long as its spinning above 2000rpm. That’s the beauty and reality of BFYB’s mathematics, though. On paper, the Abarth looked strong, but when the slide rule’s out, a lack of outright pace in the face of musclier foes puts it right here in seventh place.

WARREN LUFF SAYS
“It was more of a surprise packet than I anticipated. Through all the tight and twisty stuff, like so many small sports cars it’s a lot of fun."
"You can really slide the back of the car around. It’s got really good front end grip, surprisingly. It just cries out for another 100 horsepower. The chassis is way ahead of the engine. But in terms of fun, it does everything right."
"Brakes are good. Gearbox is quite good. You’d also like a seat that held you a bit better.”

JUDGES NOTES
David Morley - 2nd: “I think I actually prefer this to the MX-5. Beefier engine counts”
Dylan Campbell - 1st: “What a ridiculously fun, unhinged car. Wish it had an extra 50kW”
Louis Cordony - 5th: “An aggro, yet charming, take on Japan’s brilliant roadster"
Tim Robson - 1st: “Such a fun little jigger, but it just didn’t have enough firepower”