There have been some truly momentous Alfa Romeos in the past thirty years. But not one of them was ever as good as it should have been.

Why? Front-wheel drive, that’s why. We’re not saying that a tail-dragger can’t be a great thing (drive a Megane Trophy and you’ll know what we mean) but, dammit, Alfas were born to be rear-drive.

So you can see why the world was taking notice when the wraps came off a car that Alfa reckoned was going to take on the mainstream Germans at a stroke; the Giulia Veloce, complete with rear-wheel drive. Is that the whole Giulia Veloce story, though? Of course not, and enough of the intellectualising; what’s the Veloce like when it comes to the BFYB acid test? 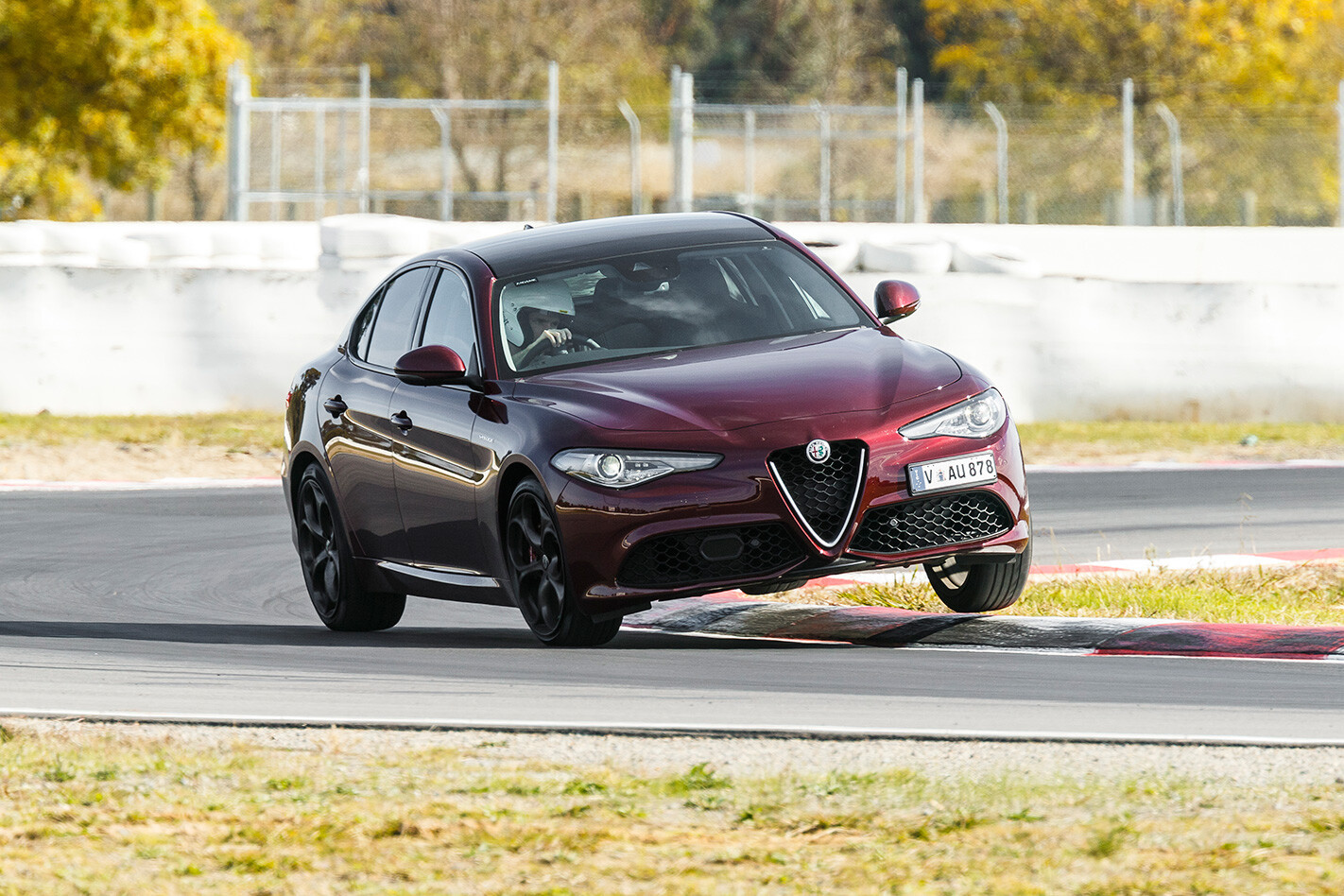 Actually, it’s not the result the Alfisti might have been hoping for. Fundamentally, the Alfa is just too road-oriented to make too much of an impression at a track, even a tight little one like Winton. The thing just feels soft overall and there’s plenty of body roll to remind you that this isn’t the balls-out QV version.

The Veloce didn’t suffer too badly in slower stuff, but the too-soft set-up really played against it in faster corners where it just couldn’t carry the momentum of pretty much anything else here. You can see the numbers for yourself, but what they don’t show is that the Alfa just didn’t feel comfortable being flogged.

Funnily enough, though, there was no lack of straight-line pace and a 13.92 is proof. Nought to 100 in less than six isn’t suggestive of a straggler, either. More than that, though, the tweaked two-litre engine in the Veloce sounded and felt like it wanted you to be forceful.

The eight-speed auto didn’t hinder it and the bonus of those ratios is that the early ones can be quite short, which keeps the thing on the boil more of the time. That said, I reckon the engine could have used an extra 1000rpm or so at the top end, but clearly, it’s been tuned for midrange rather than stretching things out between turns nine and 10 at Winton. 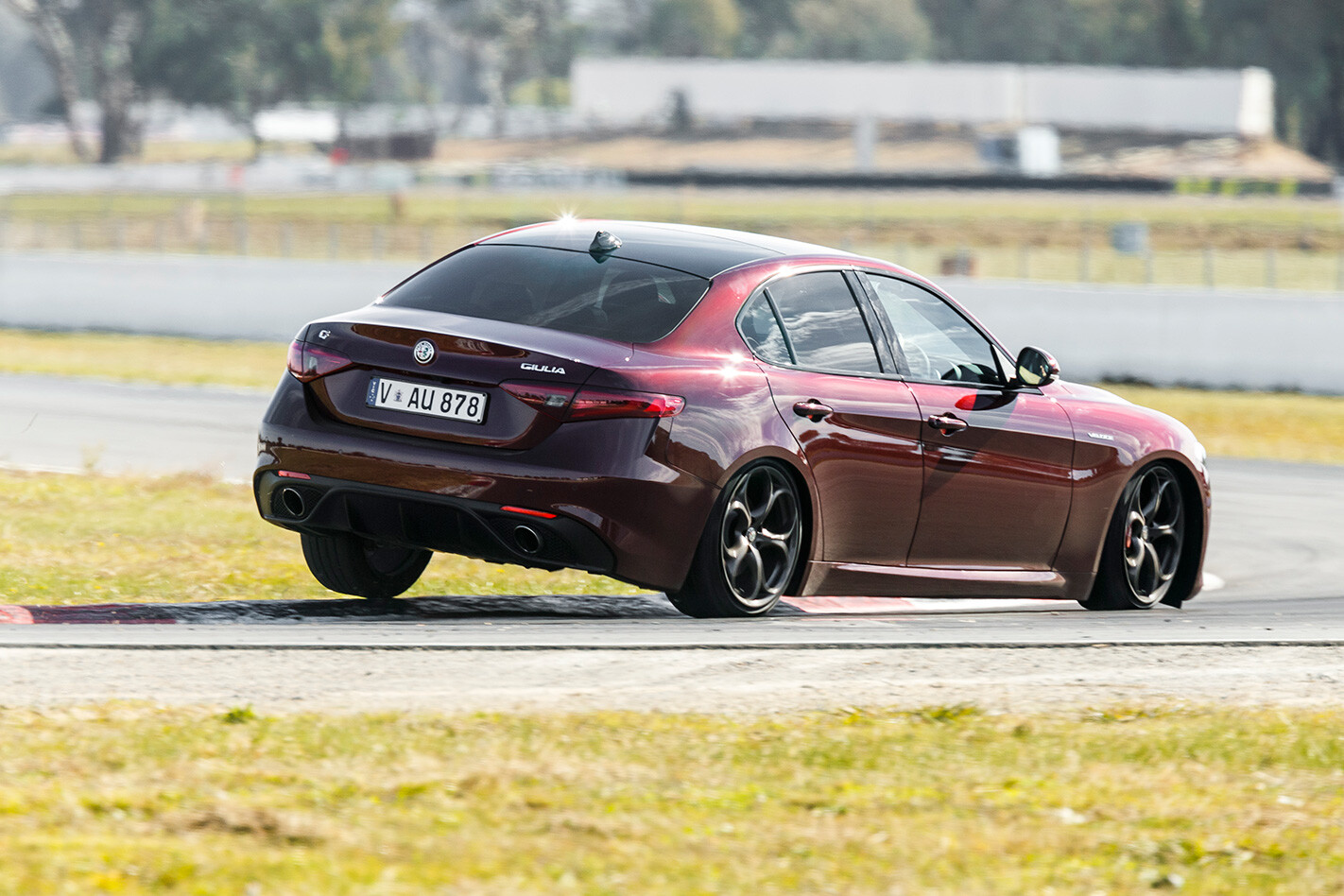 The steering felt a bit light to be really enjoyable trackside, too, and I can’t help wondering why, because the rear-drive base-model Giulia seems to have a bit more meat through the helm.

Look, the Veloce is certain to shine on-road and that makes sense given its design brief, but if occasional track duty isn’t on-brand for Alfa Romeo, I don’t know what is. I mean, if we’re talking core values...

Warren Luff says
“It’s another car that’s very restricted by not being able to turn the stability and traction control all the way off... which hurts mid-corner and corner exit. Overall it’s not a bad car, it just lacks feel and it lacks substance. It’s a bit vague in the front end and it’s quite light in the steering so it doesn’t give you confidence.
The engine’s got reasonable power and the brakes feel quite nice and I love the styling. As an everyday car there’s so many positives like the interior space and driving position.”

Judges notes
David Morley - 8th: “Here’s a car I need to spend more time with… on the road”
Dylan Campbell - 7th: “Lovely car, but what’s the point of a mechanical LSD with fixed ESP?”
Louis Cordony - 6th: “Great chassis and looks but outdone in this company”
Tim Robson - 6th: “Some overly sharp steering going on here – didn’t feel quite right”