Because when it launched its Giulia, the first derivative from its €5bn Giorgio platform, it began at the top.

It tasked the Giulia Quadrofoglio Verde with jump starting the brand’s reputation, aiming the 375kW sedan at the jugular of Germany’s most established benchmarks. 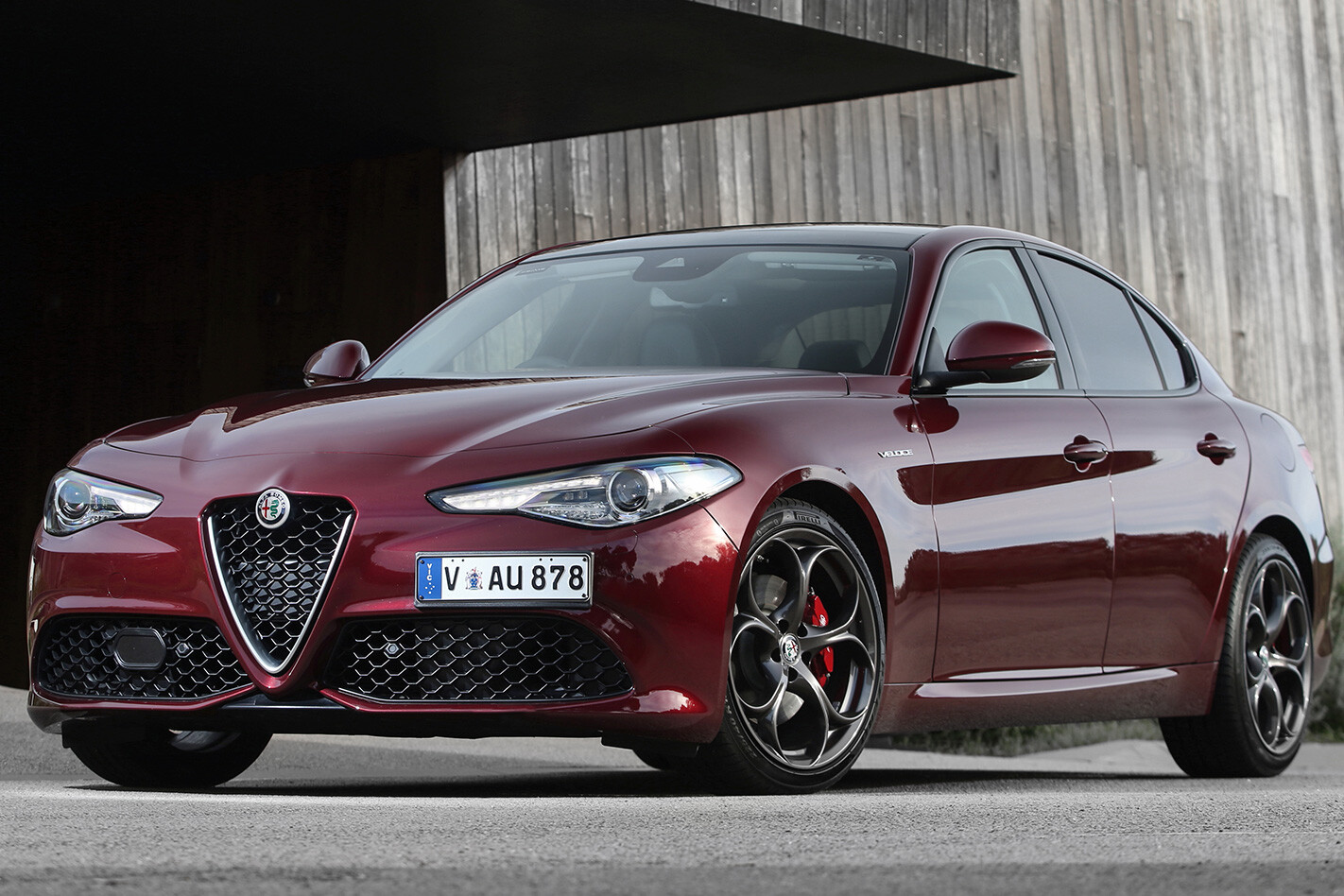 The decision has so far paid off. The Giulia QV has dive bombed into the $150K super sedan category and proved a genuine, or even better, alternative to BMW’s M3 and Mercedes-AMG’s C63 S.

But that’s not the only battle it needs to win in this war. There’s strong competition further down stream, where Alfa Romeo’s inserted its Giulia Veloce.

Dusting off the badge from the 1950s Giulietta Sprint, the Veloce is the second performance model in the range, occupying the rung between QV and Super variants. 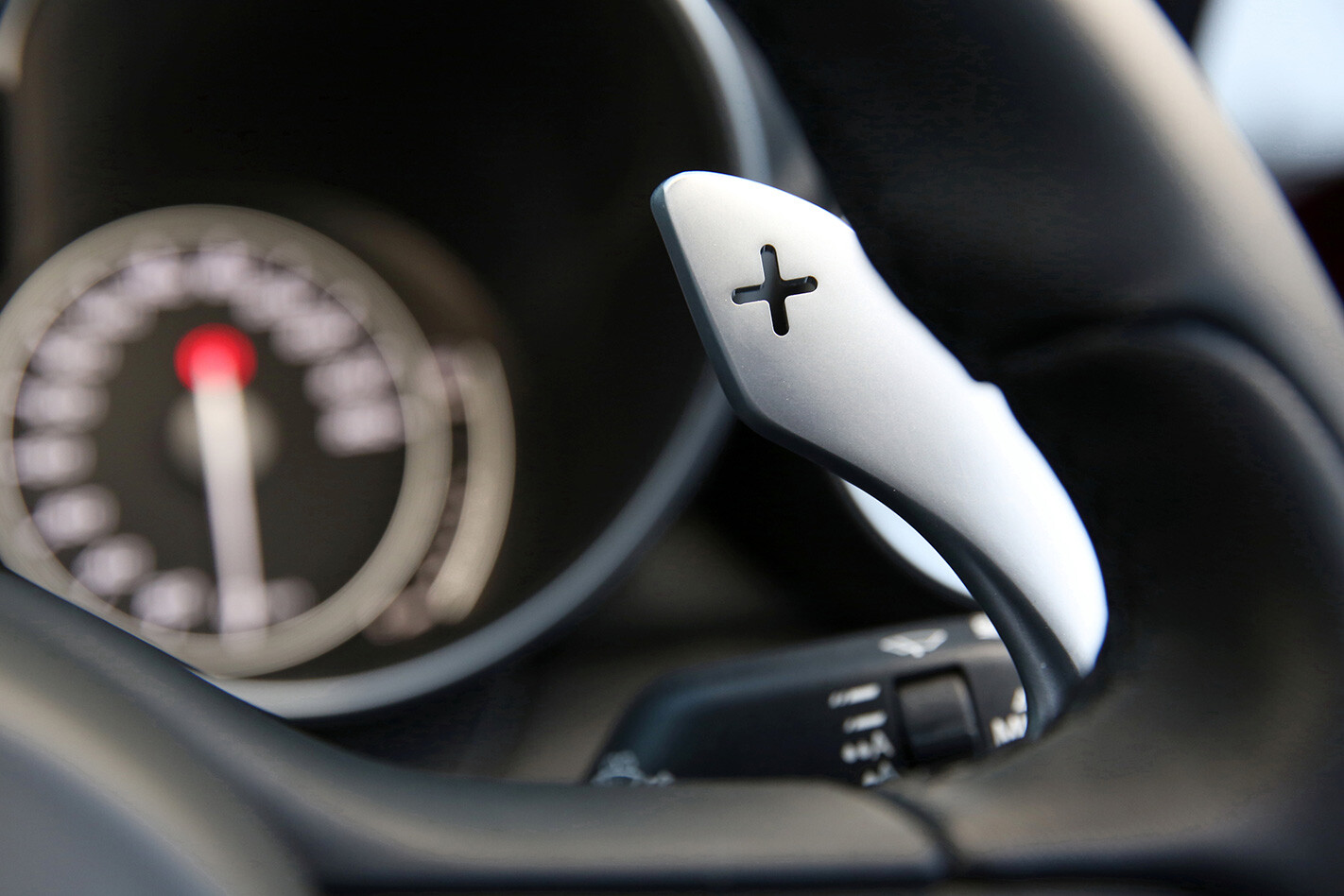 First glances, however, suggest the Veloce is more parts QV than  anything else. FCA employees might even struggle to separate the variants as they roll down Alfa Romeo’s Cassino plant in Italy.

Those 19-inch ‘telephone dial’ wheels, wrapped in 225mm wide rubber up front and 255mm-wide rubber out back, feature on the QV’s option list. While red brake calipers – two-piston at the front and single-piston at the rear – peer from behind its wheel’s curved spokes.

However, its specs reveal it’s more related to the lower priced Giulia Super variants. Stuff like that faux rear-diffuser – plugged with single exhaust tips and small fins – its brakes, wheel widths and 2.0-litre four-cylinder are shared.

And Giulia Supers can spec a Veloce pack to add the same wheels, brake paint, and design details. 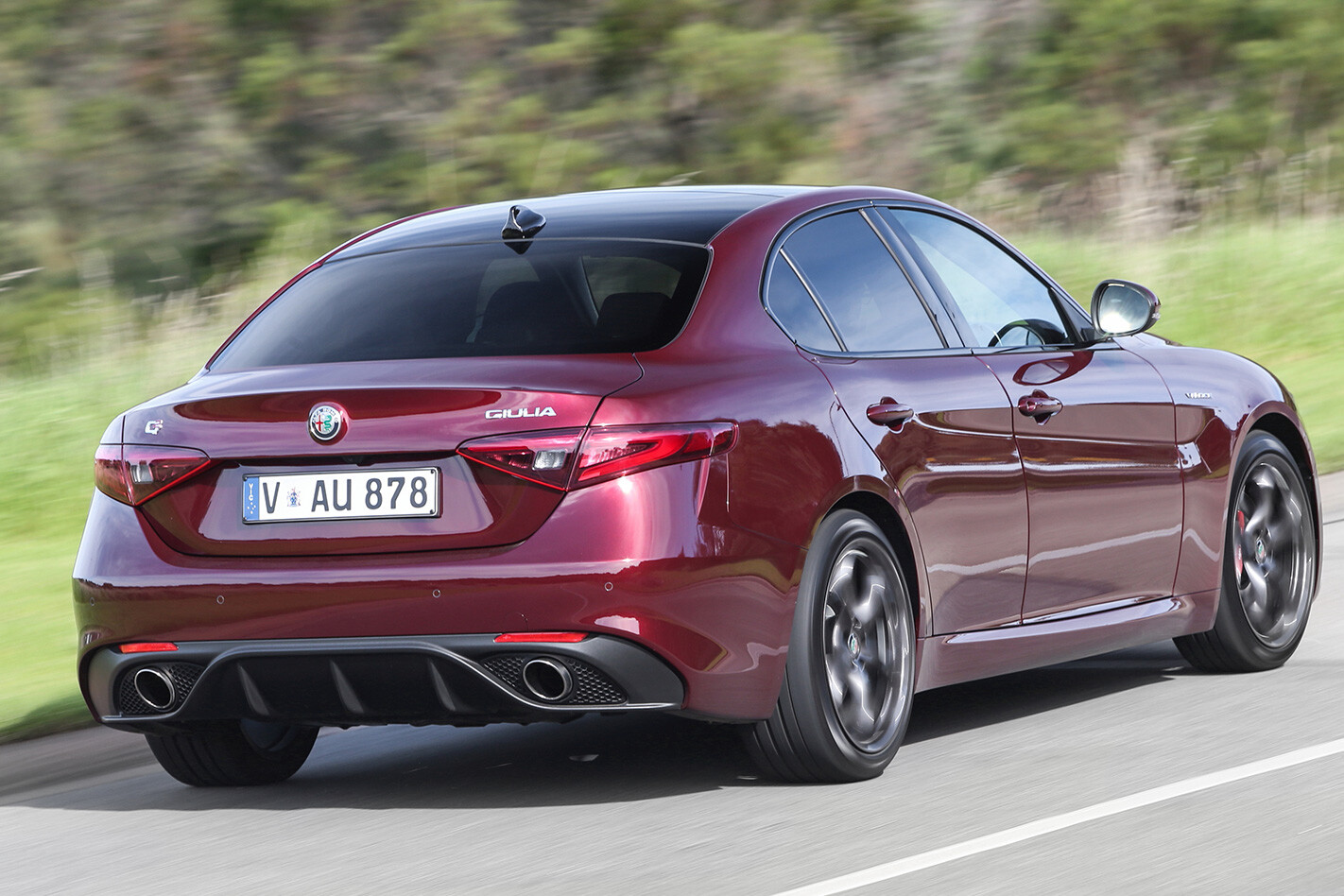 But there are some crucial Veloce ingredients that remain exclusive. The turbo four-cylinder, equipped with Fiat’s multi-air cylinder head tech, thrums out 206kW and 400Nm. Or 59kW and 70Nm over the base petrol tune.

Meanwhile, Alfa Romeo’s slipped an LSD between the Veloce’s rear wheels. Unlike adaptive dampers, the LSD can’t be optioned on lesser spec Giulias and differs to the QV’s more hardcore electro-clutch unit. 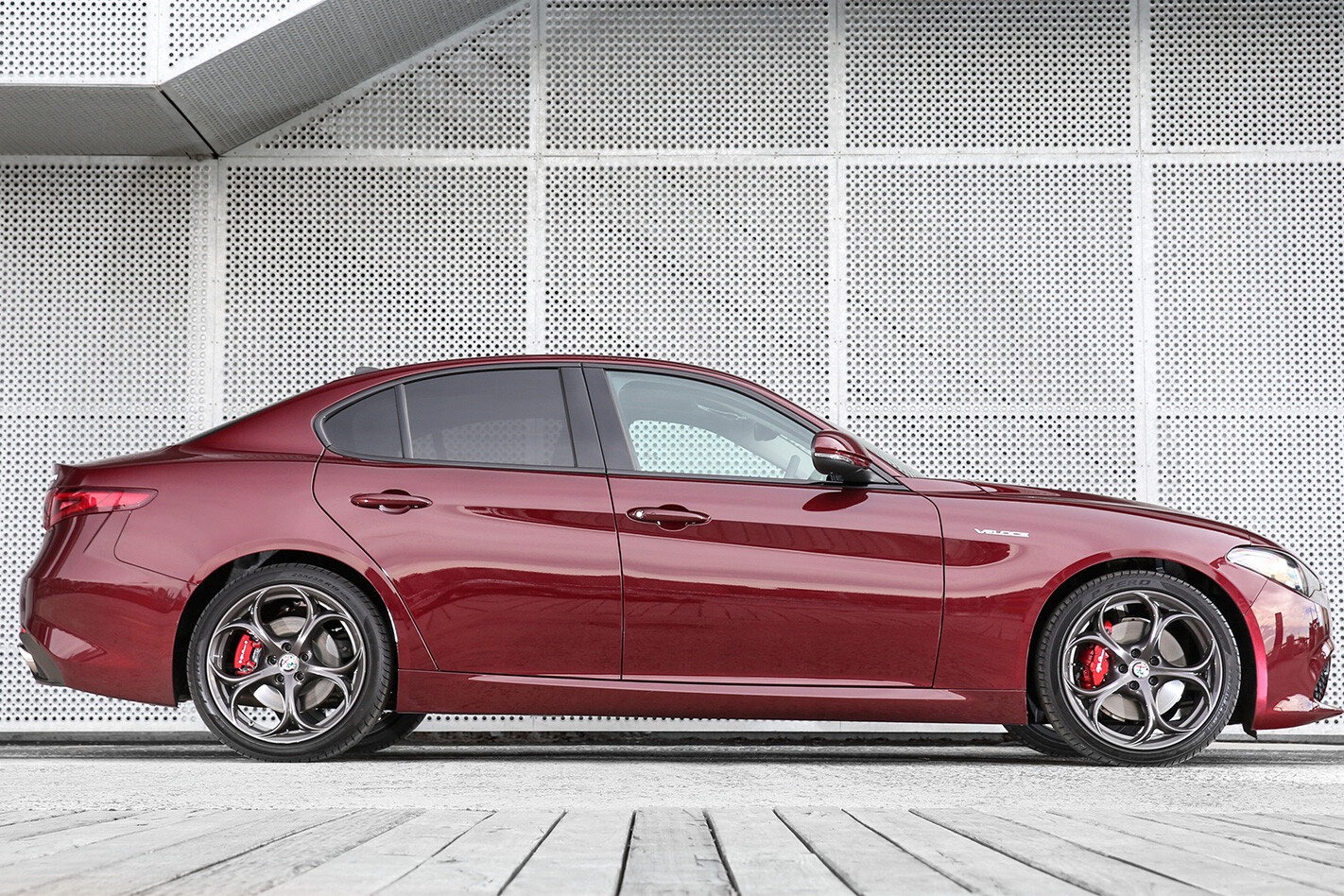 Most importantly, this gives the Giulia an instant point of difference to rivals priced around its $70K mark. Neither Lexus’s IS 200t, Mercedes-Benz’s C250, or BMW’s 330i boast adaptive damping and a rear limited-slipper.

The most refined thing about the Veloce is the way it handles Victoria’s winding tarmac. There’s a supple feel to the way its dampers smooth off potholes and absorb bumps.

Their pliancy extends to the Veloce’s secondary ride, allowing it to rise and fall on a road with excellent body control, which it uses to cover ground at a rate. 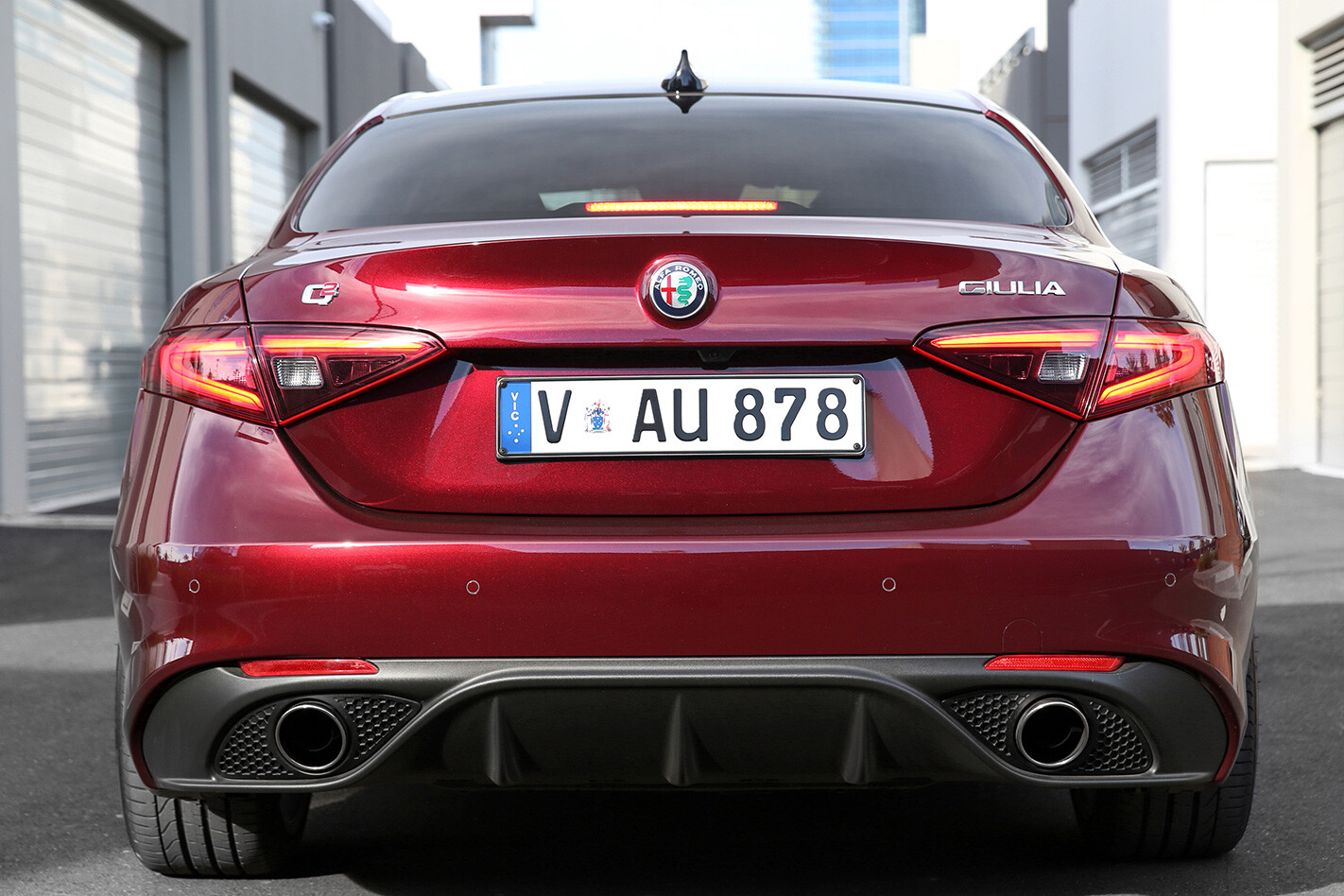 As one MOTOR staffer put it, the Veloce needs to drive only half as good as the QV to be a hit. And it does. It has the same composure that makes the QV great. But there’s a few things that hold the Veloce back as a 330i-bashing superstar.

That turbo 2.0-litre four feels as potent as Alfa Romeo claims and delivers power in a linear surge with the eight-speed auto. But it can’t rouse an emotional response.

The oversquare engine stirs with a noise that’s equally coarse as it is angry, and we wished it could redline somewhere closer to 7000rpm.

Neither does the thin-rimmed steering wheel plumb back enough road texture. It also suffers, like most of the controls, from a lightness which isn’t welcome when dialling up commitment. 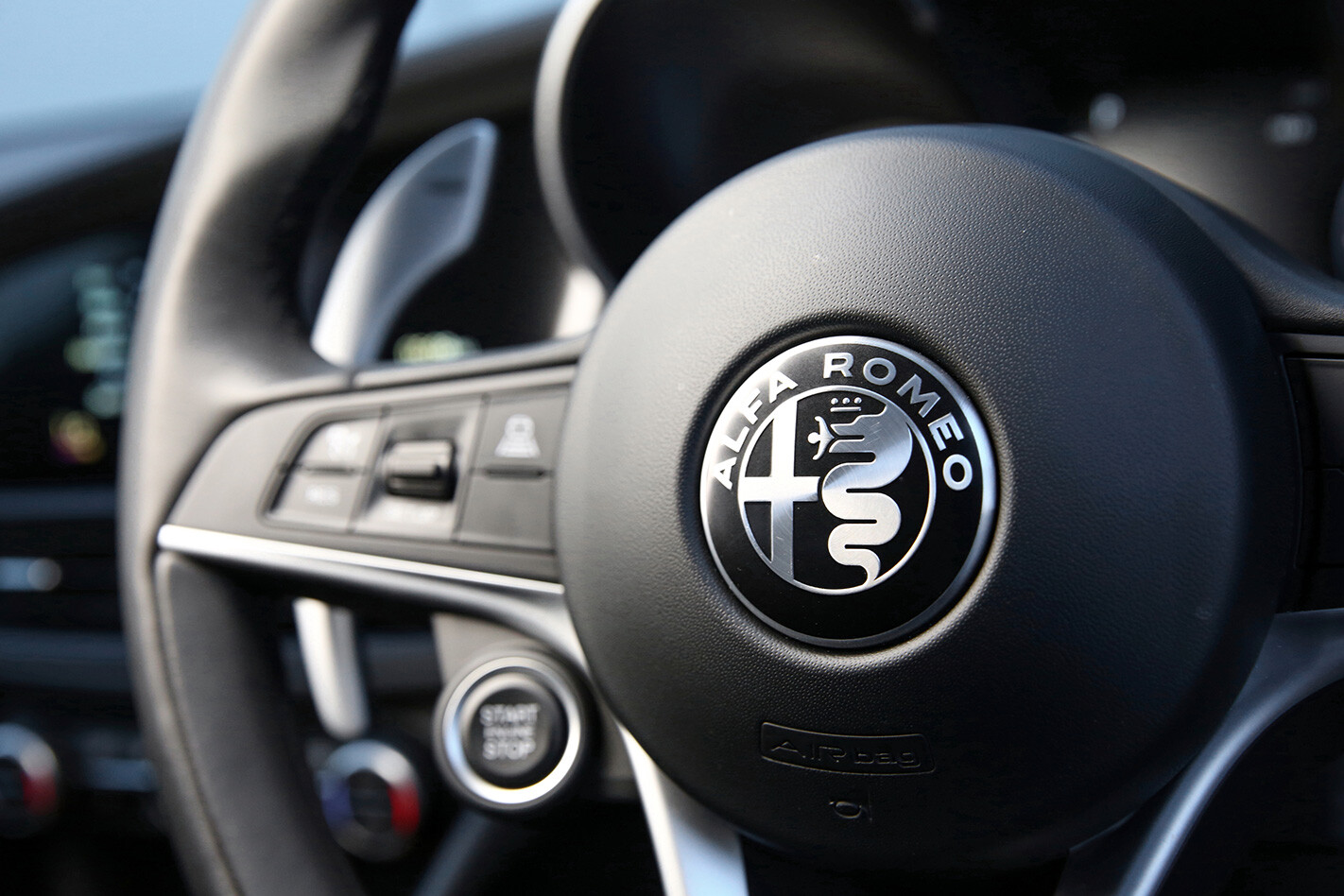 It’s again marked down by the fact its drive modes aren’t joined by a Race option like in the QV, robbing the Veloce of not only a track suspension tune, but a way to neuter its stability systems.

Perhaps this speaks loudest about the Giulia Veloce. Even though its LSD-equipped chassis and QV-esque looks suggest it’s up for much more.

First impressions count, but its the lasting one which settles this score. As we suspect it’ll work most effectively as a road car – a comfortable, quick tourer. And not a budget apex-honed QV missile.