Infiniti may have quietly laid its four-door GT-R concept to rest, but a desire to take on Europe’s best remains alive and kicking.

That’s why the Hong Kong-based company, which acts as Nissan’s luxury arm, has launched its latest Infiniti Q60 with a seductive new exterior.

And followed that up with a potent new engine for the range topper, known as the Red Sport, as the model enters its third generation.

Don’t be fooled, however, by Infiniti’s haste to label this Q60 an ‘all-new’ car. Under its fresh sheet metal lurk familiar origins. Sure, it’s grown in length, width, and the tracks are marginally wider. But it’s that 2850mm-long wheelbase which hints its DNA’s getting on. 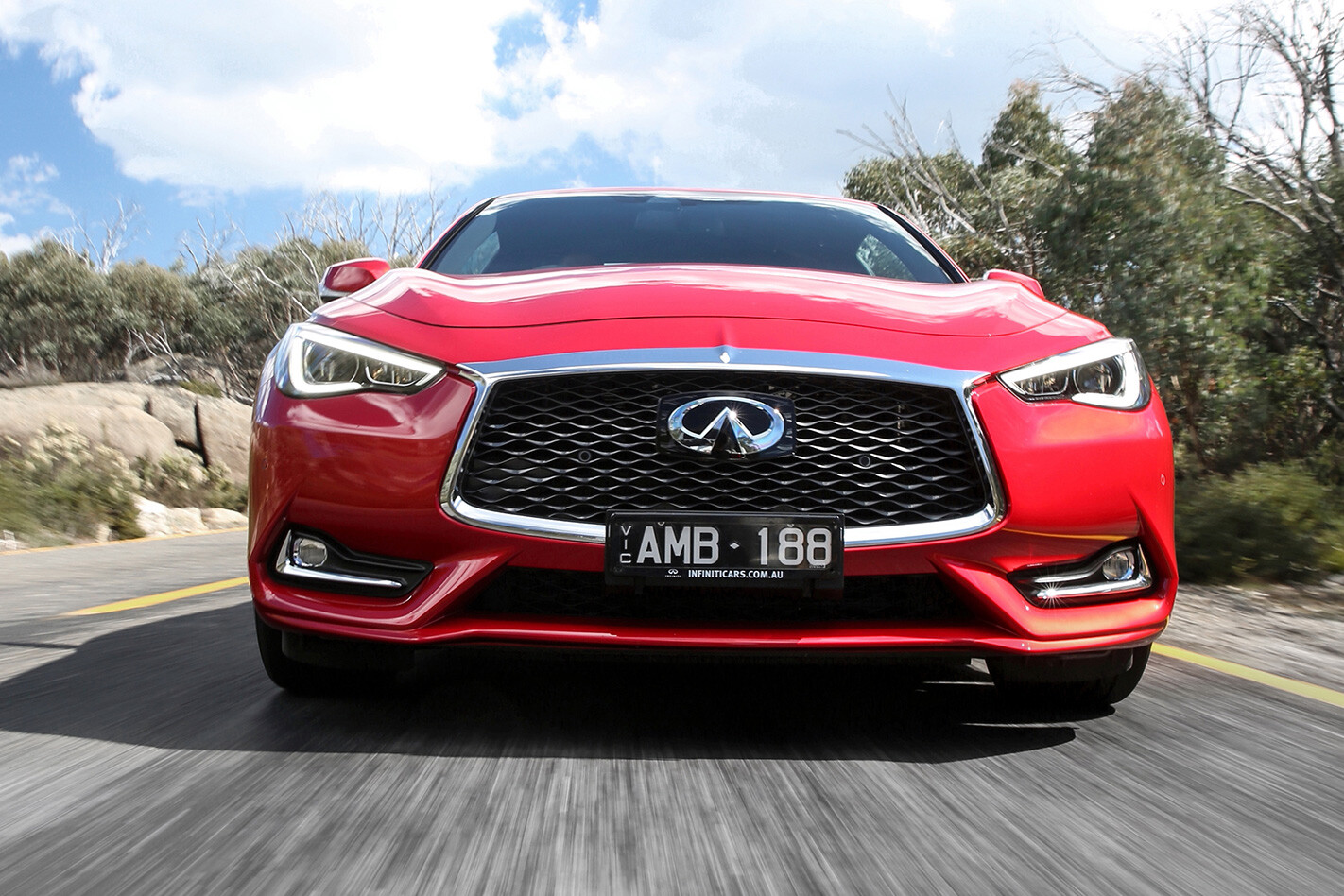 Born on Nissan’s FM platform, which has underpinned everything from the 350Z to the current Infiniti four-door Q50, it’s wheelbase is identical to that of the succeeded G37 Coupe S, sold here from 2012.

And the Q60’s no lightweight. Thanks to a steel-heavy structure and healthy standard options list the Red Sport manages a portly 1784kg kerb figure. By comparison, that’s 92kg heavier than its forebear. Or 20kg on top of a Nissan GT-R. 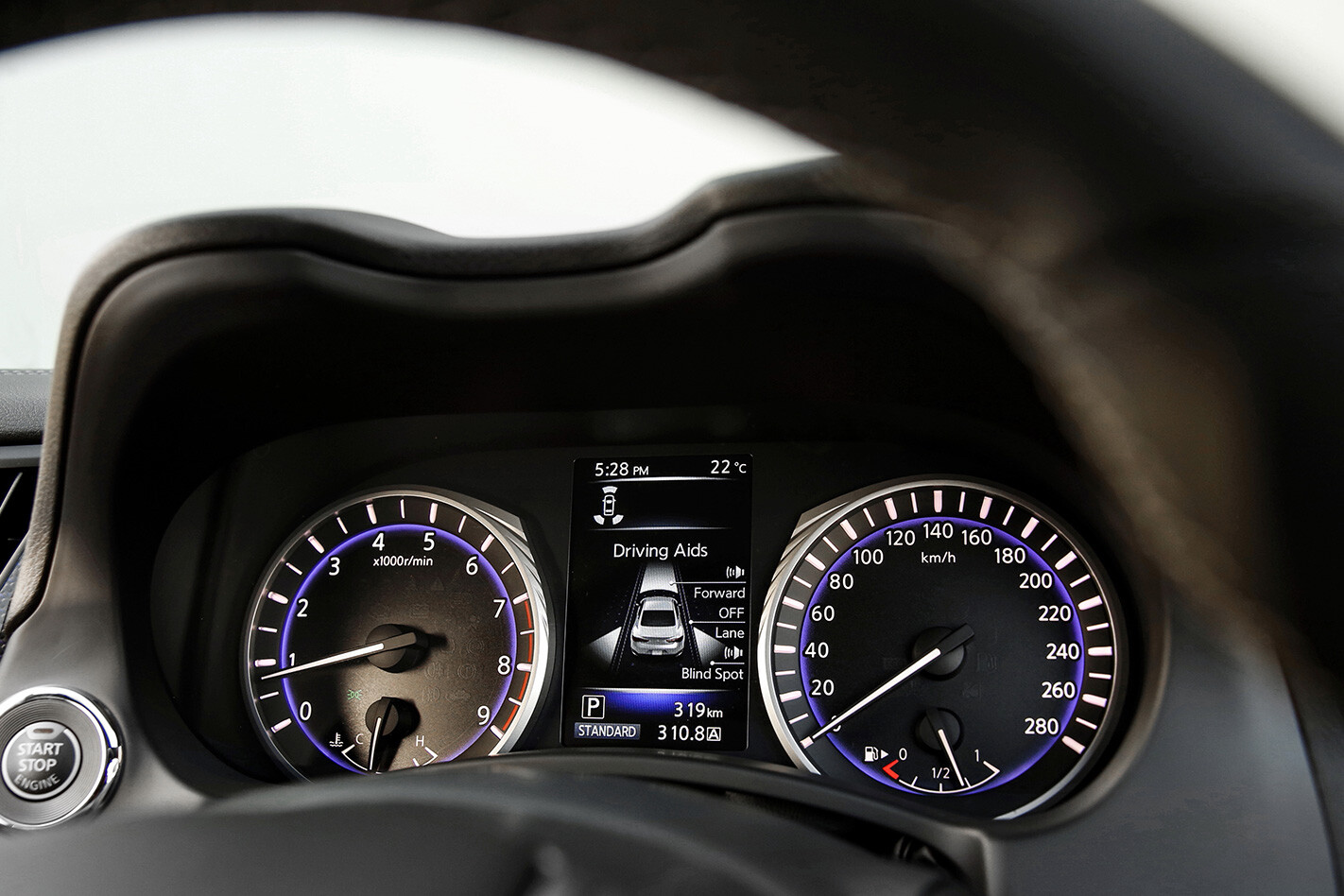 Infiniti’s engine division forged a new 3.0-litre twin-turbo V6 to lug around the new mass. Codenamed the VR30 it comes from the same engine family as the GT-R’s VR38DETT, yet with little relation. Much like the 3.7-litre atmo V6 in the G37, grunt dominates the driving experience. The Red Sport musters 63kW and 115Nm more than the old unit, putting peak outputs at a burly 298kW and 475Nm.

This is fired exclusively through a seven-speed automatic transmission to an open-differential rear axle. Overseas markets have the option of all-wheel drive, but Infiniti Oz has no plans for that to come here. 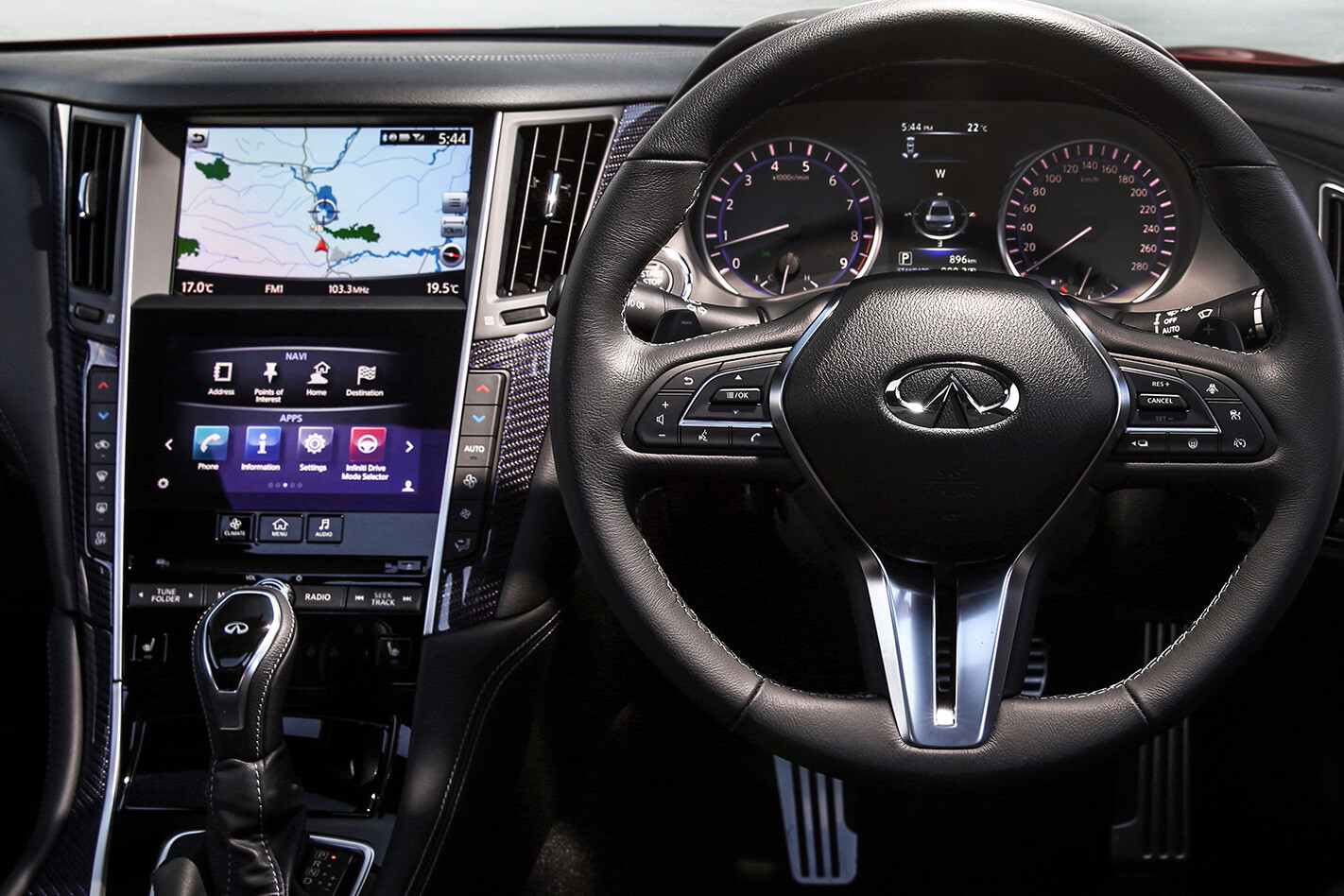 It doesn’t matter all that much, though, as the company whispers both cars will crack on to 100km/h in around five seconds flat.

Sinking full clog in the Red Sport leaves us with little reason to doubt them. Thrust builds from 3000rpm to its 7000rpm redline in a seriously rapid, but linear, manner. 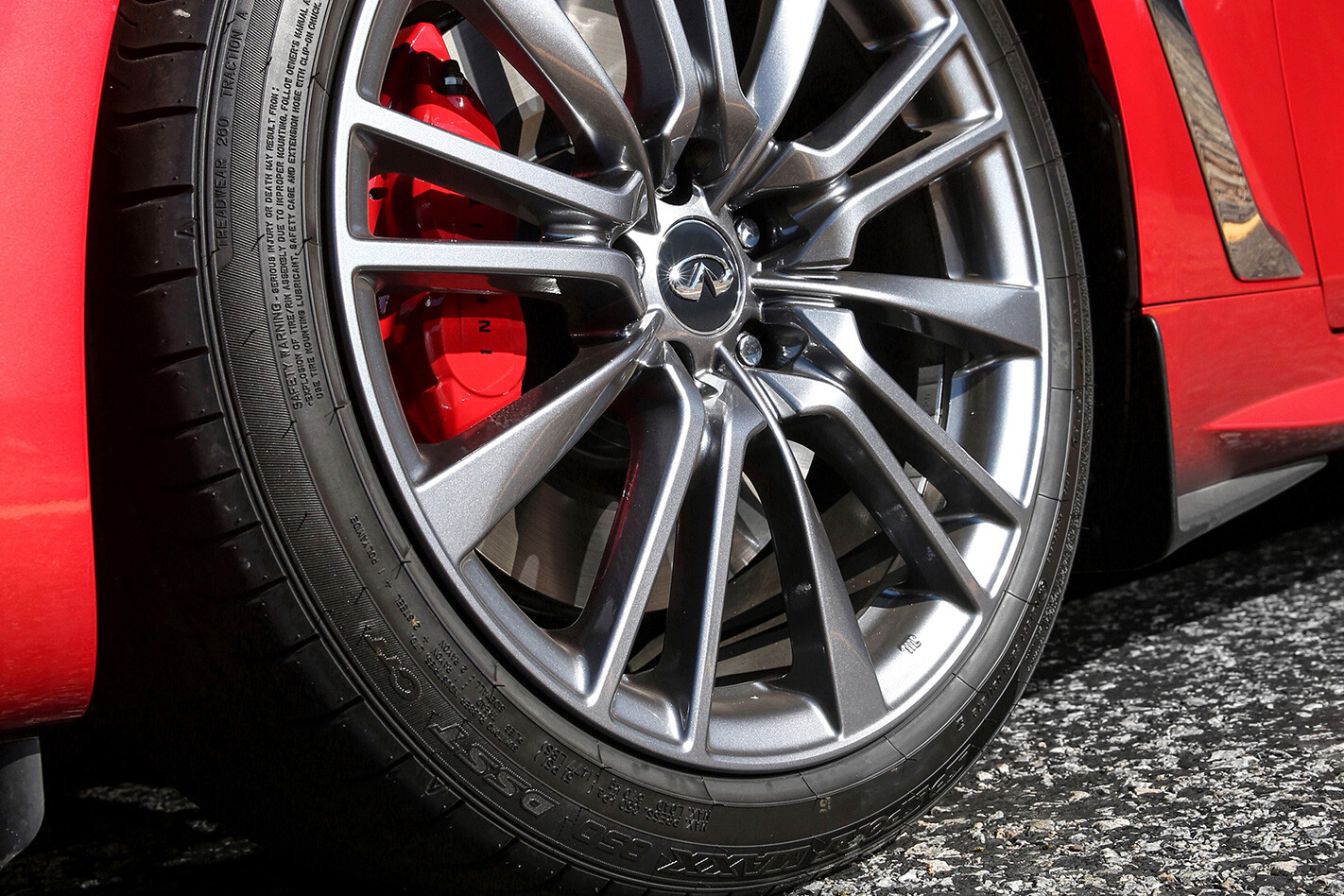 The acceleration above triple digits is addictive and it wails like a GT-R muffled by pillows. As it unleashes this on 245mm-wide rear tyres, it’s a wonder the stability system doesn’t flash like a lakehouse’s bug zapper. In fact, lateral traction’s pretty good.

Of course, new suspension bits help. The Q60 carries over a front double-wishbone and rear multi-link setup that suspend 19-inch wheels. Engineers have binned rear-steering and active suspension geometry, but have selected adaptive dampers exclusively for the Red Sport.

Working with a balanced chassis, they help extract decent grip from the Dunlop Sportmaxx tyres. Ride-wise, the package picks up ripples and fine disturbances, however overall body control is good, even when the Q60’s ratcheted up into Sport Plus mode (another Red Sport-only treat). 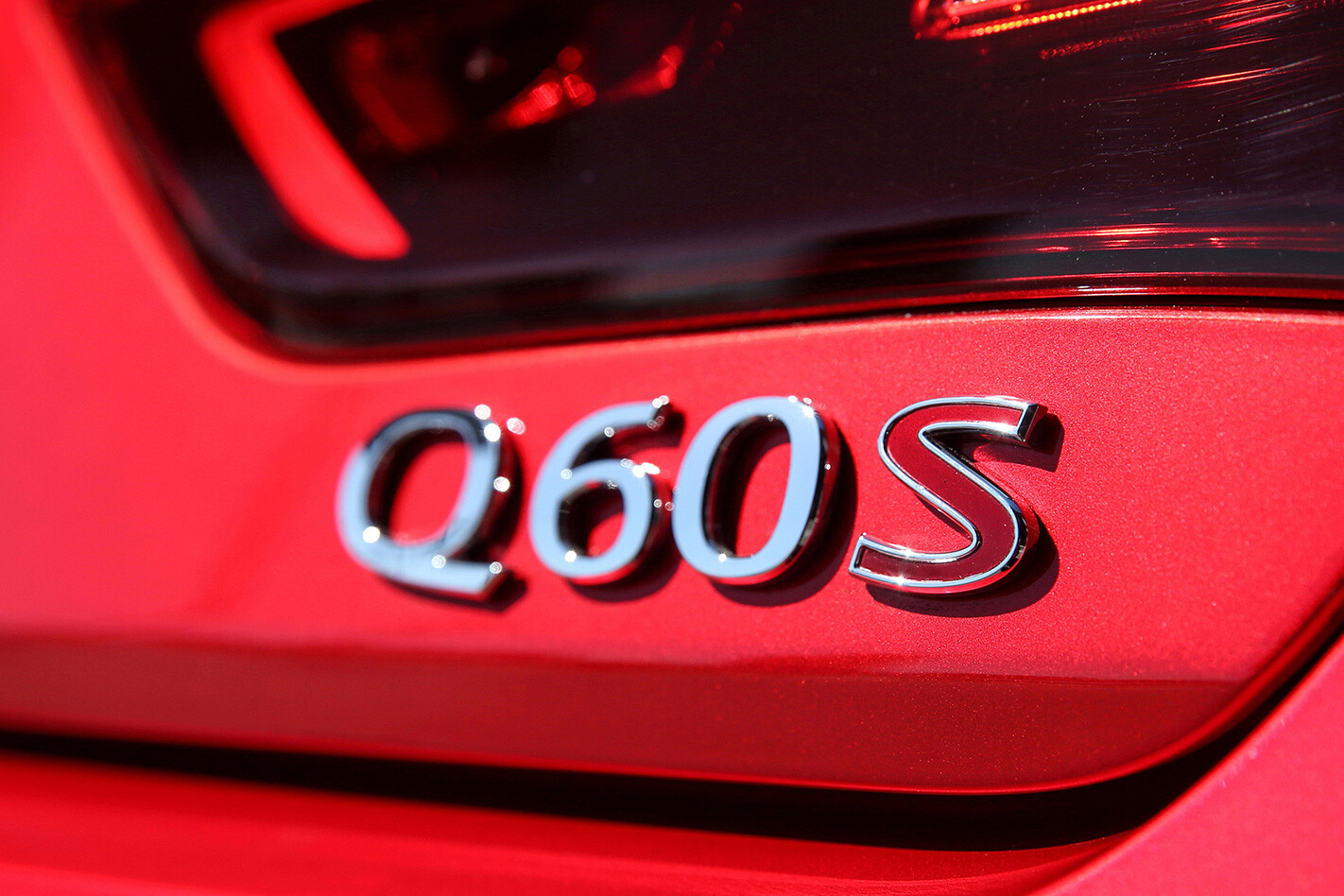 Another standout are the brakes. Made by F1 gurus Akebono, they’re strong and offer good pedal feedback.

Forget styling, though, when it comes to the Q60’s most polarising feature you can’t ignore its steer-by-wire technology. The system’s been upgraded to offer more feel and feedback since its introduction in the Q50 sedan, but it still feels completely digital and distant.

It’s very accurate, and does away with kickback, but there’s no information to help you judge commitment levels. 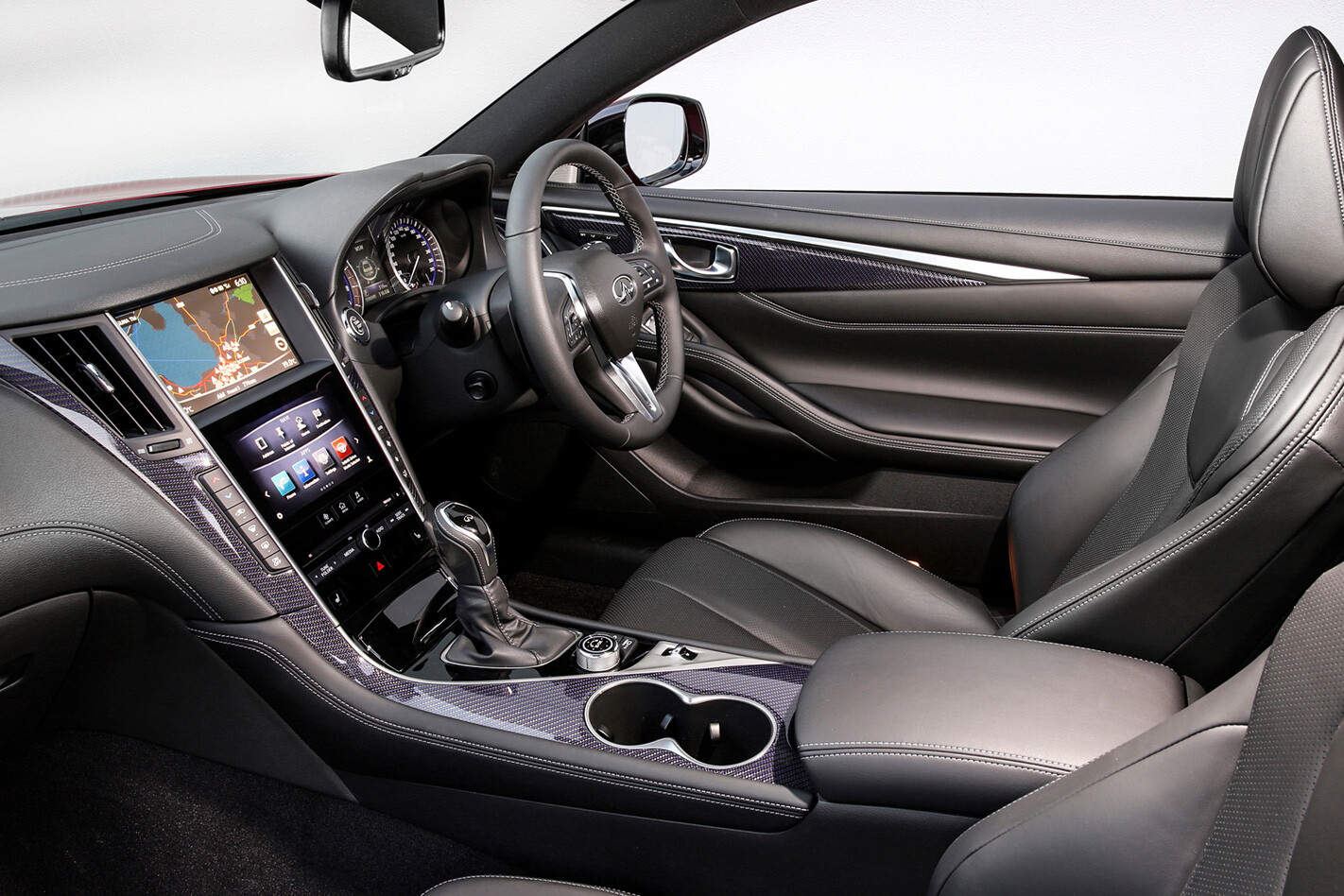 Inside, though, Infiniti’s worked hard to class up the workstation. It’s slipped pieces of carbon fibre, aluminium, and semi-aniline leather to lift its ambience. It’s nicely designed, too, if you ignore the fact two digital screens stack on top of each other.

And there’s almost nothing left on the options list. Besides paint, everything from the noise-cancelling Bose sound system to the eight-way adjustable seats are standard. It’s impressive.

Speaking of impressive, the Q60’s swooping lines look striking in Sunstone red (pictured). It suits the car’s dramatic looks, which will be a big drawcard for the brand. It’s been hard at work refining the car’s exterior and travelled lengths to perfect panel gaps and paint finish. But we’d wish Infiniti had applied the same attention to the Q60 Red Sport’s interior. It bears questionable fit and finish in some areas despite an all-round solid feeling. Another little niggle comes with the seven-speed gearbox, which can be a little lazy downshifting third to second.