It’s called the Infiniti Q60 and it is perhaps the sexiest and speediest Japanese sports coupe we’ve seen in some time.

Revealed overnight at the Detroit motor show, the next-generation Q60 flaunts a low nose with full LED headlights that rises over muscled hips towards a shapely rear.

The slim tail-lights even give a nod to the coupe formerly known as the Infiniti G37 and G35 that came before it in 2008 and 2002 respectively, while 19-inch alloy wheels and dual sports exhaust fill out the lower parts of the body.

The four-seat cabin gets lashings of contrast-stitched leather and carbonfibre-look trim, surrounding the twin centre screens that now include a G-meter among other performance displays. Big news is the availability of a 3.0-litre twin-turbocharged V6 engine in two states of tune – 224kW/400Nm or 298kW/475Nm. In each case power is made at 6400rpm and torque between 1600rpm and 5200rpm, all channeled through a seven-speed automatic to either the rear tyres or optionally all four wheels.

The all-wheel drive system is an on-demand type that typically sends 100 per cent of grunt to the back unless slip is detected. Infiniti hasn’t revealed performance or kerb weight figures for its new coupe, but the Q60 gets an active front grille shutter and slippery aerodynamic figure of 0.28cD. 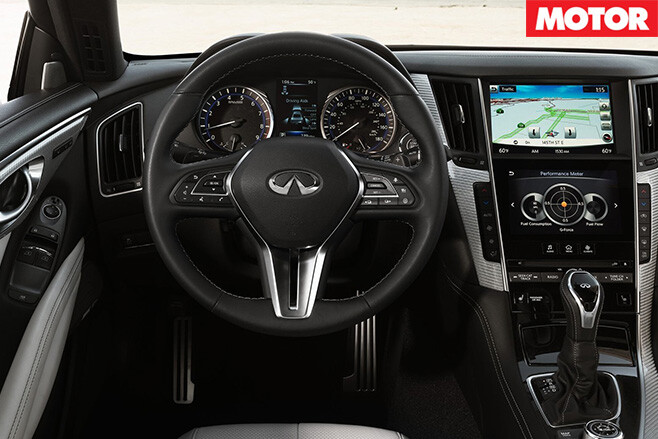 There is also a 2.0-litre turbocharged four-cylinder that opens the batting for the Q60 range with 155kW/350Nm to rival the BMW 420i and Lexus RC200t. Infiniti certainly throws around plenty of acronyms at potential 4 Series and RC buyers.

The standard Dynamic Digital Suspension includes Sport and Sport+ damping modes, mirroring the hardware and software changes of the closely related Q50 sedan that are aimed at addressing previous ride and handling concerns.

The brand’s controversial fly-by-wire steering setup, called Direct Adaptive Steering, is claimed to have “undergone significant re-tuning to enhance steering feel and feedback” and is now available with six driver-select settings. Only the four-banger gets traditional rack-and-pinion electric-assist steering. 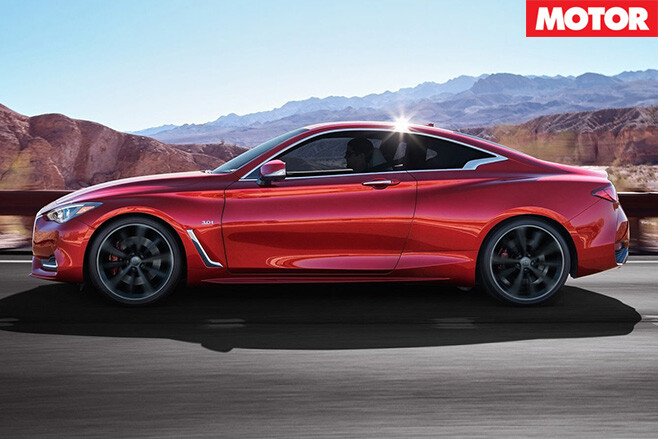 Infiniti Australia says the Q60 coupe will arrive locally in the fourth quarter of 2016. Only one twin-turbo V6 version is confirmed at this stage – you can guess which one – and the four-cylinder isn’t as yet.

The current Q60 is priced at bang-on $70K, but even if the powered-up new-generation coupe stretches beyond $80K as is expected, then it will still likely have rivals covered for performance.