In the way of throttle and brakes, Infiniti has shown us steering can also be operated by wire.

How does it work? The theory is Infiniti’s ‘Direct Adaptive Steering’ removes the mechanical link between driver and front axle, replacing it with an elaborate ‘virtual’ union.

The system feeds steering wheel inputs via a ‘steering force sensor’ to Control Modules, which then send a signal to a pair of motors driving a conventional-type rack and pinion assembly.

Interestingly, the design integrates a conventional steering shaft as well, though under normal driving conditions a bespoke clutch mechanism disconnects the steering wheel from the rack.

Should the Control Modules sense an issue, or the car need to be moved with the engine off, the clutch engages, forming the normal mechanical steering path.

Convoluted? You bet. Infiniti, however, spruiks ‘interesting’ benefits of steer-by-wire. Firstly, it claims steering action is more “direct” and responds quicker to driver input as it removes the “mechanical loss” of a steering shaft.

Secondly, it completely isolates the steering wheel from the unwanted shock, from road imperfections such as potholes, otherwise transmitted in conventional steering. And a by-product, for good or bad, is Infiniti’s design removes all vibration normally experienced, full stop.

Thirdly, its system allows a wider variety of steering “feel” (its description, not ours) and counterweight calibrations so, essentially, the steering character is customisable and can be programmed/assigned/saved to the vehicle’s settings. 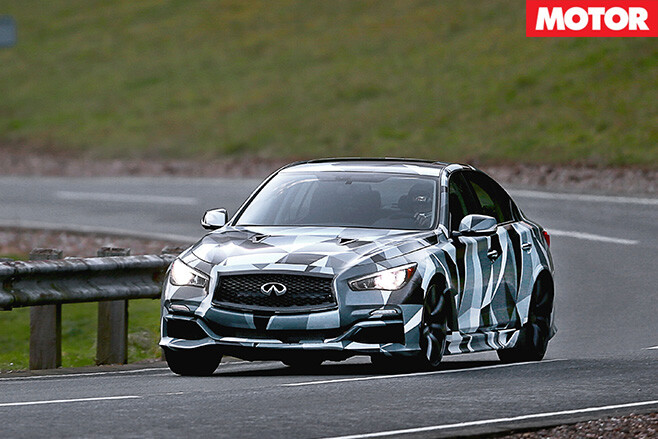 Downsides? For a start there’s added cost and complexity, the latter, in theory, compounding potential for failure. That it still requires a mechanical shaft as a fail-safe measure adds questions of redundancy to the ‘virtual’ element of the system.

But a major point of contention with digitised steering, one that no doubt creates skeptics and enrages purists, is it simulates traditional feel and feedback attributes. And the wider critical verdict of Infiniti’s system is, despite 10 years in development, Direct Adaptive Steering falls short of providing natural traits drivers are accustomed to via purely mechanical (electrically or hydraulically assisted) means.

However, one theoretical benefit of a steer-by-wire system is it could work in tandem with electronic stability control systems to correct the trajectory of the car independent of driver steering input. Adding the ability to override the driver and steer around a problem, perhaps to dramatic degrees.

The Infiniti Q50 currently integrates Active Lane Control in with its steer-by-wire system claiming it’s the most sophisticated lane-keeping tech out there because it doesn’t rely on ESP intervention. It’ll also compensate for crosswinds and road camber changes while ALC is activated, removing the need to add steering correction to the car.

Will it catch on? Time will reveal whether the system sparks.

DOUBLE TIME
The system’s rack-and-pinion operation is controlled by a pair of small electric motors, one at each end of the rack mounted at 90 degrees. The use of two motors provides an extra fail-safe, costs less, and also allows the engine to be mounted lower.

CENTRE COMMAND
Looking like regular external hard drives for your desktop PC, the three Control Modules are essentially the brains of the system, and receive inputs from the SFS (to the right) to then talk to the two motors on the steering rack. Having three modules allows operation to continue should one fail.

MODAL INSTINCTS
In some Infiniti Q50 variants, by using the centre stack touchscreen to access Drive Mode Selector, a driver can choose four preset modes – from sport-focused heavy to leisurely lightweight – plus one personalised mode to tailor the steering’s characteristics.

USE THE FORCE
The steering wheel itself is mechanically linked to a Steering Force Sensor. The SFS serves two functions. On one hand, it mainly affects and varies the resistance to simulate feedback, and on the other sends input data to the Control Modules.

CLUTCHING SAFETY
In the middle of the conventional steering shaft is a clutch, normally disengaged to let the steer-by-wire system do its thing. It engages to create a solid mechanical link should the electronics fail.