The leaves have fallen off the trees. The skies are grey all day long. Early morning windscreens are covered in ice. Must be time to dust off the Driftbox, load 19 or so cars on to transporters and head for lovely Winton in central Victoria.

Yep, it’s Bang For Your Bucks time again. For many MOTOR readers, BFYB is the main event of the motoring year. We’d all love to drive the latest and greatest supercars that will drop bombs on each other in a few months at PCOTY, but the reality is those of us who have not worked hard enough at being born rich (thanks Gina) are, effectively, budget bound. That’s where the BFYB equation comes into things: how fast can you go without having to rent out the spare bedroom as a meth-lab?

These 12 months have been a bit of a champagne year and a quick glance at any of the contenders would have most revheads stopping for a second look. Obviously, the big local hitters are here, but for the last time as a club. 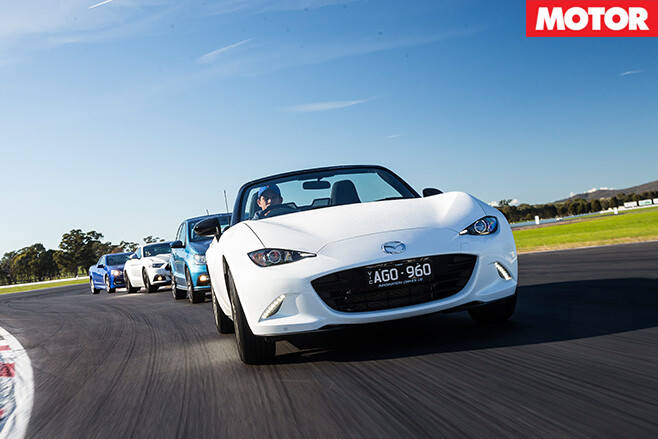 Holden will still be building cars this time next year, but Ford Oz won’t. Scratch one epic battle in 2017. But for 2016, it’s still game on with the V8 Commodore pack facing off against the last-of-the-breed XR6 and XR8 Sprints. Gen-next is here too, in the form of the Mustang and the Chrysler 300 SRT with its new eight-speed auto and more poke; they’re the very cars that will be attempting to fill the void when the locals have left the building.

Our $100K cap hasn’t ruled out some of the tastiest Euros, either. Audi’s brand-new hot-shots are present and accounted for in the form of the TTS and the RS3 Sportback, which promises to be practical but potent with that crazy five-cylinder engine. The cheapest AMG you can buy – the A45 – is also here, this time with a power hike and revised suspension.

There’s also a pair of BMWs, starting with the reigning over-$50K champ, the M135i, and another that has been deemed ballsy enough to carry the M-badge into a new market segment. Where the proper M-stuff used to stop at the M3, the new M2 aims to extend the M-ness down the price ladder as well as expunge the bad memories of 2011’s 1M, which was somehow less than the sum of its parts, not to mention more expensive than the M2. 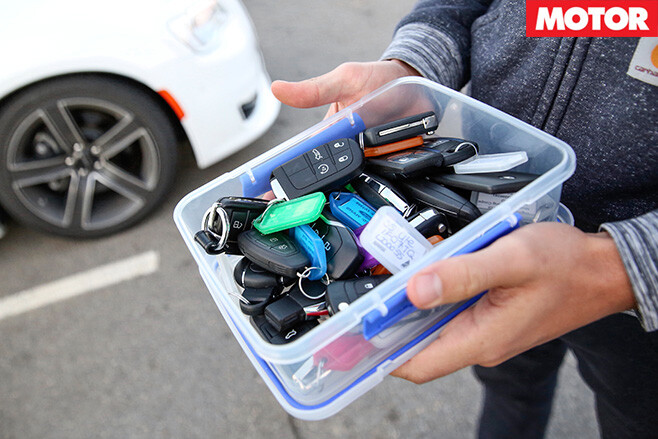 But if those sub-$100K muthas make BFYB interesting, it’s the tiddlers (for want of a better word) that really take the ethos to the limit. Yep, the sub-$50K category is where the knives are really out.

DAVID MORLEY
Fresh from a failed audition as Arnie’s replacement in Terminator 6, Morley was left with no choice but to return to the madhouse

WARREN LUFF
Two days before BFYB Luffy was racing a McLaren 650S GT3, so we started him in the Fiesta ST to help him ease back into it

DYLAN CAMPBELL
The power of command having gone to his head, ‘Dictator Dylan’ decreed only his right side was to be photographed

Let’s begin with the reigning sub-$50K (and overall) champ: Ford’s character-filled Fiesta ST. The problem for the little Fordy this year is its performance has remained the same while the competition has all taken steps forward. Okay, it’s still well below thirty grand, but will it have enough oomph when we crunch the numbers in the BFYB abacus?

The opposition has never been sharper. There’s the revised VW Polo GTI, itself a two-time BFYB winner in its previous generation, which is now fitted with adaptive dampers as standard. Also from VW is the Golf GTI, this time in Mark VII, base-model form – a first for BFYB. Don’t forget that it’s the Golf GTI that has been setting the hot-hatch benchmark for a decade now, so let’s have less of that base-model cringe, shall we? 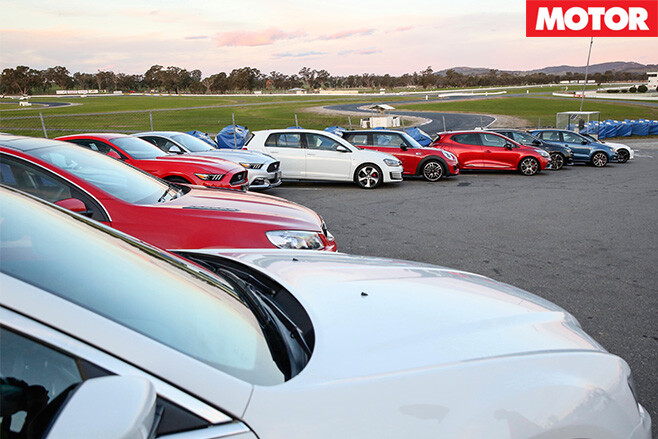 Renault’s Clio Sport has muscled up with the advent of the Trophy 220 edition, following the lead of its big brother the Megane Trophy with a revised suspension tune, more grunt and better seats. There’s also a new tune for the double-clutch gearbox, aimed at making a sharper tool.

Plenty of Mini Coopers have had a crack at BFYB over the years, so it makes sense that the latest JCW version would get a guernsey, too. With 170kW, two litres and razor-sharp suspension, it’s the most focussed new-gen Mini yet.

While we all fell in love with the new 1.5-litre ND MX-5 at PCOTY last year, with the 2.0-litre version of the MX-5 finally on sale, the ‘big block’ got the nod for Bang. The Mazda’s 118kW might not sound like much, but surely, any advance on the 1.5-litre version’s brilliance has to put it in with a shot. You’ll also recall we had the Peugeot 308 GT at BFYB last year, but this time, the more serious GTi 250 version was a walk-up start. It doesn’t have the tricky diff or bigger brakes of the 270 version, but it does have the sticky Michelins from that car as an option. With 184kW from just 1.6 litres, it promises to be some kind of hand-held flare.

Wildcards? You want wildcards? Okay, how about these two? Thanks to the marketing departments at both Holden and Ford, there’s a big hitter from each camp that sneaks in below the $50,000 category cut-off. Actually, both the Commodore SS Ute and the Mustang Ecoboost easily make the financial cut which shows you just how much car you can get for reasonable money these days.

They’re both new models too, and even though the Holden Ute is ‘just’ a facelift of the VF series, it’s a big enough upgrade that the vehicle itself is hugely improved by wearing the VF II tag. For a start, the rather good 6.0-litre V8 is now a 6.2-litre unit, capable of 304kW and no less than 570Nm of torque. Significantly, the Ute also gets the luscious new soundtrack engineered by Holden for the VF II and if it isn’t the best sounding two-door ever to haul a hay-bale, we’ll go hee-haw. When it comes to the Mustang Ecoboost, I know what you’re thinking: what the hell is a Mustang doing with a four-cylinder engine? What you have to remember is that four-banger ’Stangs have been a reality in the US since the fuel crisis of the late-’70s led to the Mustang 2 with its piddly four-pot.

By which I mean, Americans ‘get’ a Mustang with four cylinders AWOL. But before you dismiss it out of hand, check the stats: a meaty 233kW of power and 432Nm. That would have been enough to see off pretty much any local V8 built before the turn

The formula for success

Determining a Bang For Your Bucks winner is easy – every car earns a score, highest score wins. How we calculate that score is a little more complex. We split the field into two categories ($0-$50K and $50-$100K) as it gives a clearer indication of each car’s performance relative to its closest price peers. However, we also award an overall winner, incorporating data from the entire field. 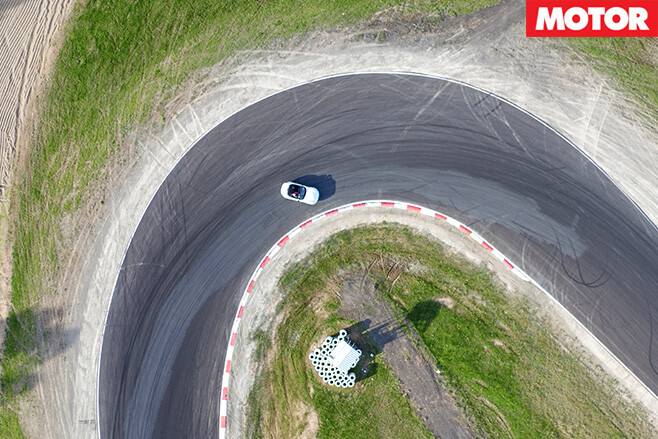 As the name suggests, the score is made up of performance (Bang) and price (Bucks). Comprising 40 per cent of the final score, price is the easy bit. The field has an average price (this year, for all 19 cars it was $55,795) which is given the indexed value of 100. If a car is cheaper than the average it’ll score greater than 100 (remember, high scores are good), if it’s more expensive, its Bucks score is less than 100.

The Bang score makes up 40 per cent of the overall score and is determined exactly the same way, there are just more criteria – listed below right. A lap time says a lot more about a car’s total performance than its ability to simply stop from 100km/h, so the various criteria are weighted. The data is collated in a huge Excel spreadsheet and after deploying various mathematical formulas to balance each car’s respective results on the track, we arrive at a ‘field performance average’.

Again, this average is given the indexed value of 100 and cars faster than this score higher than 100, cars slower than this score less than 100. The ‘Bang’ and ‘Bucks’ scores are then combined in a 60:40 weighting to become the final BFYB score, though the final scores are all divided by two to make the numbers look a bit nicer. 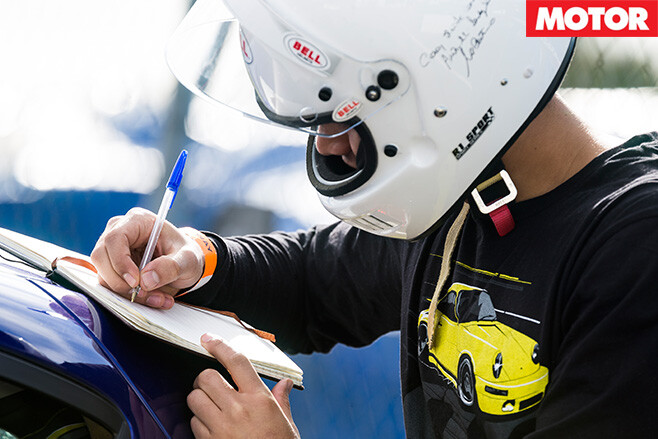 Obviously, changing any of the criteria weightings will have an effect on the results. Every year we re-evaluate the formula and look for potential improvements, however it’s remained largely the same since 2008. It remains so for 2016 – we think the current formula offers a good balance between rewarding an exceptionally fast car while still giving the budget offerings a shot.

Winton Raceway
It’s the same old Winton but with a completely new surface. Winton’s 3.0km liqourice strap is dressed in sticky new tarmac following a recent $1 million injection from the local government to bring the track up to global standards. The layout is unchanged, however the reprofiling of some corners, along with the smoother surface, should mean lap times will tumble compared to previous years.