Performance Car of the Year 2016

The Brownlow Medal, Formula 1 World Championship, hell, even the Gold Logie are all about finding the best, smartest, toughest and most successful entrant in any number of pursuits.

And Performance Car of the Year is no different. Unless you consider that none of the cars here will bring their WAGs with them, wear too much bling, and none of them will get fried on sponsors’ champagne and hurl into their handbags.

Which is not to say there won’t be any bad behaviour or tantrums, but if there is, it will most likely be the work of the broader MOTOR crew rather than the cars themselves. Actually, that’s interesting. 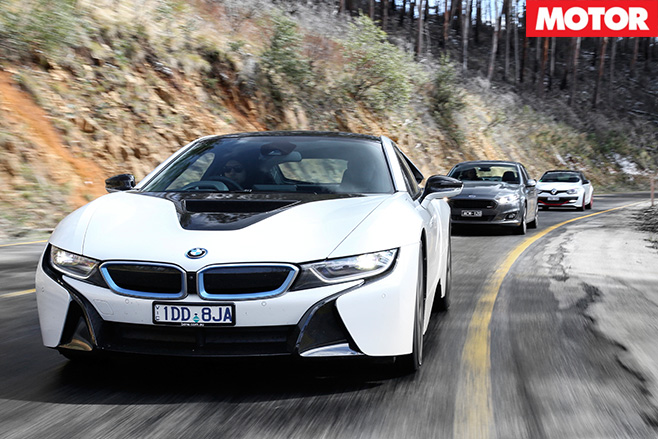 While PCOTY judges generally make about four major mistakes per man, per year, the list of four-wheeled participants that have soiled themselves or the race track over the years is a pretty slim volume. Not that this knowledge fills MOTOR’s staffers and judges with any real hope, because hope is not a commodity associated with PCOTY.

Nope, we all know the next few days will be spent either sweating away behind the wheel of something exotic, standing around waiting for golden light to descend or, if there’s time, eating something yellow. Welcome to PCOTY, fools. 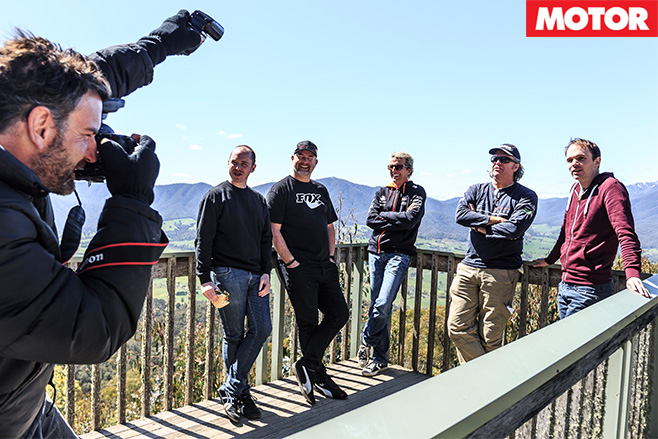 Anyway, since it’s all about sorting the chaff from the wheat, we should start by letting you know who got a guernsey this year. Following a hot showing at Bang For Your Bucks earlier in the year, the Renault Megane RS275 Trophy-R could not be ignored in the major league.

With the sort of horsepower that V8s were only dreaming of 15 years ago, the Trophy has both the grunt and the chassis to make a real statement. Which it does. But more than that, the Renault has the grip and clever front diff to make us wonder aloud if, in fact, this isn’t the best handling tail-dragger we’ve ever strapped into. Big call, but…

Another vaguely affordable entrant is the Peugeot 208 GTi 30th Anniversary. It’s another car that did well at BFYB and, if you believe the hype, it finally recaptures the spirit of the 205 GTi that still gets us old blokes misty-eyed whenever it’s recalled. 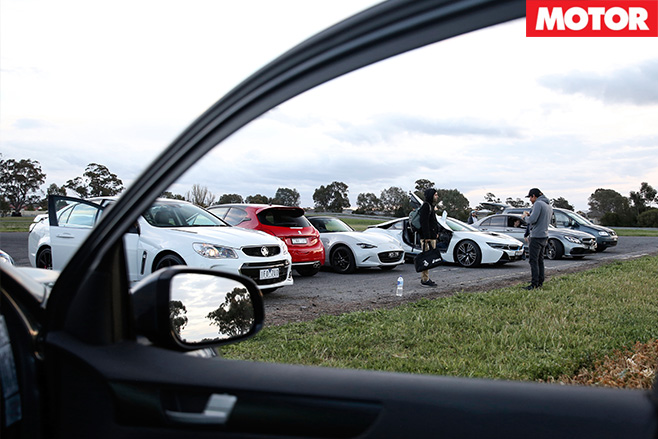 Oh sure, the new 208 has scads more power than the old 205 (about double), but if it can channel the spirit of the old flexi-flyer, then it’ll be a force to be reckoned with.

Staying with the sensible-money stuff just for a moment, we come to the reborn Mazda MX-5. Again, the headlines would have us believe that the new Mazda roadster has tapped into the ethos of the original (and, so far, best) MX-5. And the spec sheet bears that out, too, with a kerb weight almost as tiny as the non-airbag NA MX-5 and a small engine tuned for flexibility.

Word on the street is that the little Mazda is not over-tyred and, therefore, has grip levels to match its thrust levels. The original MX-5 made the concept of balance its cornerstone, but does modern tech still allow for that type of analogue response? 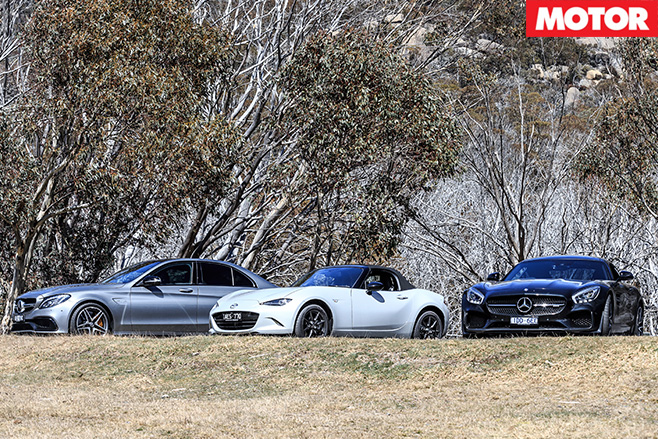 If you’re old enough to shave (don’t laugh in this company) then you’re old enough to know that the first Lexuses were stately, solid luxo cars that dropped residual value like they’d been driven off the roof of Trump Tower. But later in life, Lexus got a bit cynical and started putting leather trim in Camrys and calling them ES300s.

This has tarnished every mid-sized Lexus since, but the new RC F is the car to change that perception. With a 5.0-litre V8, 351kW (we reckon that’s conservative) and rear-drive, this one could add up to a poor man’s LFA. 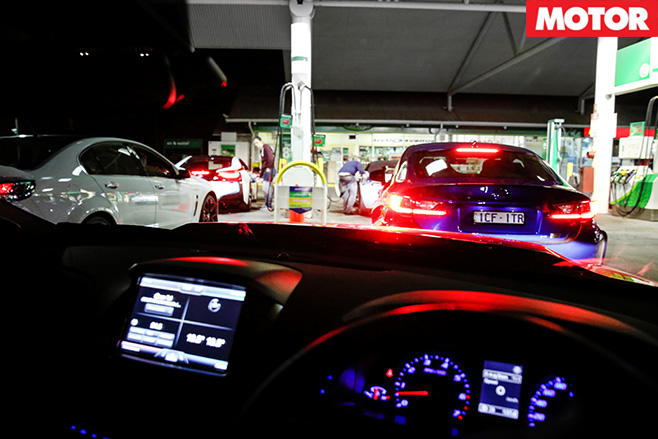 A pair of Mercedes-AMGs emerged as contenders this year, too. The original C63 was – and is – one of the best Q-ships ever to drop a chalkie. Those mild-mannered looks and giant atmo V8 lurking within were enough to make most of us go a bit wobbly at the knees on first acquaintances.

Of course, time and technology stand still for neither man nor machine, and eventually the dreaded emissions caught up with the C63 as they did nearly every non-turbo passenger car engine. So the new C63 has a pair of snails hanging off its smaller (but still 4.0-litre) V8. But can the raw evil be maintained? 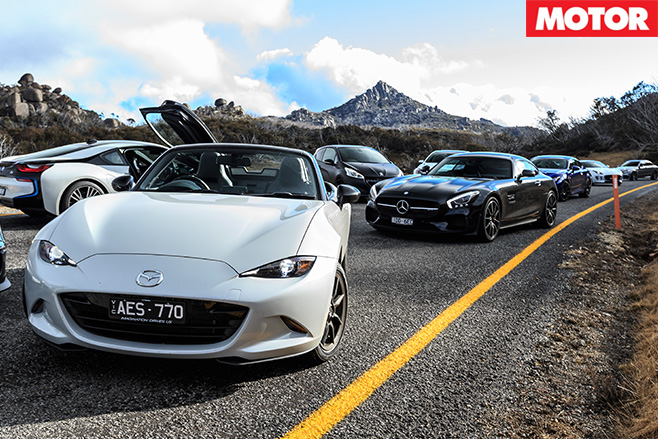 Then there’s the AMG GT S which is – somewhat loosely – based on the gull-winged SLS coupe, but seems a much more liveable, useable piece of equipment. Like the C63, the GT S has gone from a big atmo lump (in the SLS) to a 4.0-litre, twice-blown V8.

The gull-wing doors are gone, but it’s still a big car for a two-seater, with a long nose and short rump, and loads of character. The Euro scribes are hailing it a 911 competitor. Can that really be true?

Speaking of 911s, the Porker du jour for 2015 is the new GT3. Like the 991 on which it’s based, the new GT3 is longer, wider and a little heavier. The big question mark surrounds the electrically-assisted steering and whether it can still convey those legendary 911 levels of feel, feedback and involvement. 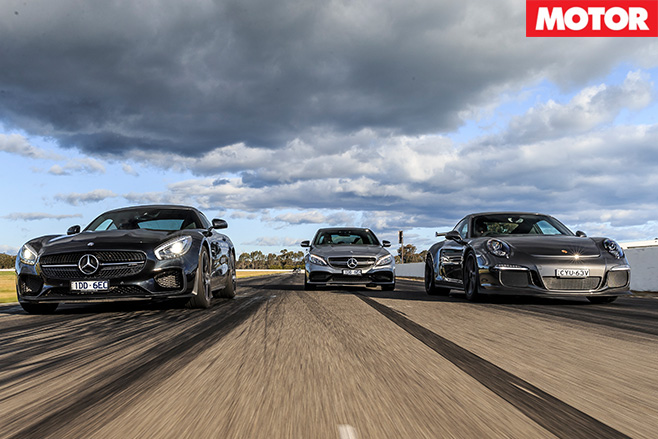 And then there’s the paddle-shifted PDK transmission with no option of a conventional six or seven-speed manual. Oh dear. Has the tactile baby of tradition been chucked out with the bitter bathwater of efficiency?

Another huge hitter comes from Jaguar. But while the F-Type charmed us last year, this time around there’s all-wheel drive in an attempt to inject some semblance of sanity into what is otherwise a sanatorium special.

The rest of the F-Type Coupe R package is still that svelte shape which harks back to the original E-Type in some ways, but doesn’t pander to the past at the expense of going modernly fast. But on the basis that nobody thought to question last year’s car’s (podium placing) rear-wheel drive, not everybody is convinced that driving all four wheels will benefit the big cat. 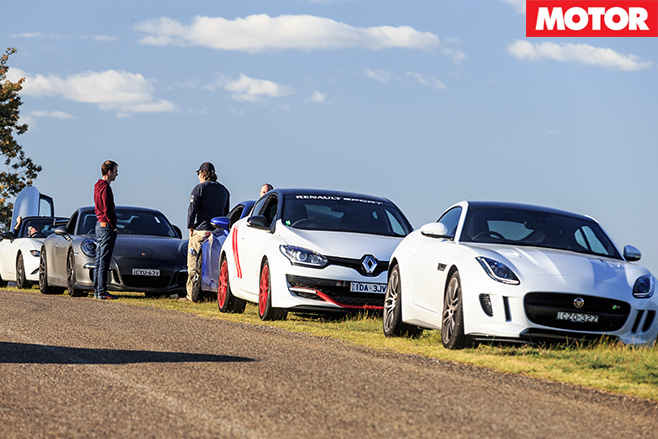 Now, while we know that local car-making is about to grind to a helpless end, that doesn’t mean that local performance cars have dropped off the radar. Quite the opposite, in fact, and the last-one status of the XR8 and the Series II VF Commodore SS has ensured that interest in them has never been higher.

Ford seriously under-estimated the number of supercharged XR8s it could sell, and Holden probably would have done the same had it not already known that a huge percentage of its Commodore sales were of the V8 models. 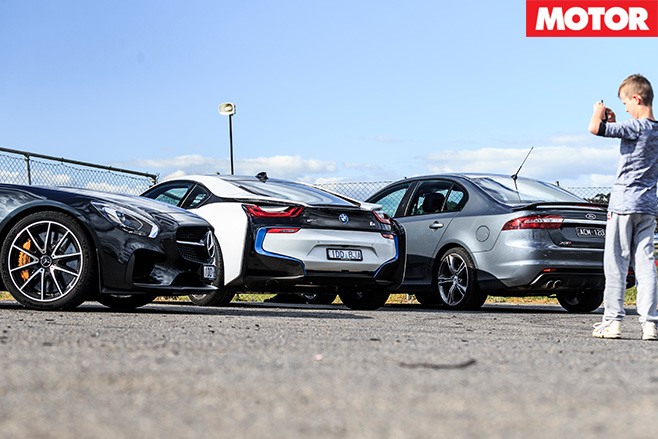 Meanwhile, the move to FG X sheet-metal has done the XR8 a world of good, and that blown 5.0-litre continues to punch harder than its advertised 335kW of power would suggest. And the Series II VF?

It’s a big step up, what with a bigger 6.2-litre engine pinched from HSV (more or less), some visual and aero changes, and a new soundtrack that will blow you away the first time you hear it. Throw in the Brembo brakes of the Redline model and the Ford – and everything else here at PCOTY – suddenly has tougher competition than ever. 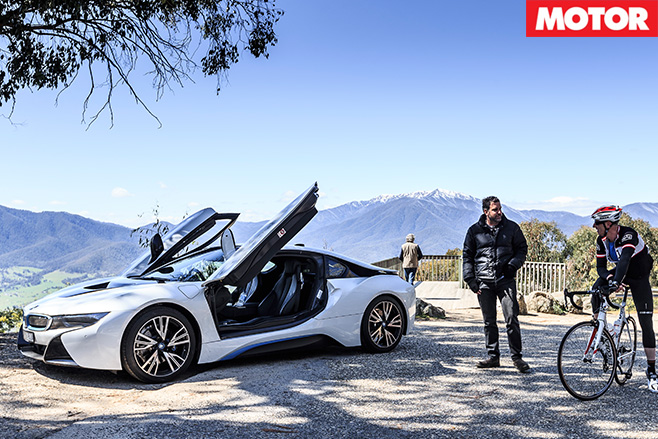 The wild card is from BMW. Expensive, space age and undeniably racy, the i8 is a glimpse into the future of high performance. Okay, so if all you know about hybrids is the Prius, then prepare to be blown away.

The triple-cylinder engine of the i8 is interesting, and so is the all-wheel drive layout that sees electric motors driving the front wheels. It also has a plug-in facility, allowing you to charge it overnight for a commute’s worth of electric-only fun. And hey, at least we know where the AMG’s gull-wings ended up. 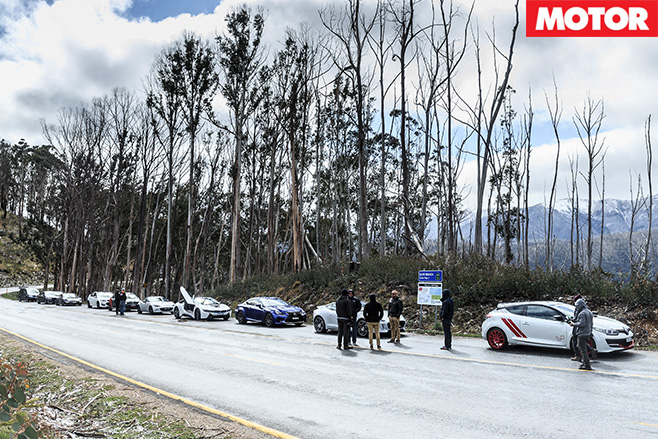 That’s a pretty wild collection of cars when you think about it, and diversity is not something that’s lacking in this year’s crop of hotties. In fact, I reckon it’s some kind of champagne year, really, and it’s certainly the first time I can recall a hybrid making a serious play for the silverware.

And then throw the additional ingredients into the mix: the weather, the highway patrol, The Cockburn and, yep, four days of yellow food and shared motel rooms, and you’ve got yourself one hell of a hootnanny. Or the next Jonestown, who can say?