We continue to be astounded by the rate of automotive progress and nowhere is the rapid advancement more evident than Bang For Your Bucks.

In 2015, two of our $50K-$100K contenders managed to scrape under the 13-second quarter mile bracket; 12 months later we have six cars in the 12s and our slowest contender is tripping the beam at 13.4sec.

We’re breaking new ground here, as when Bang For Your Bucks first bounded into existence back in 1994, it wasn’t envisaged cars this fast would ever face the BFYB formula.Remember, this was back when all and sundry were invited, including the likes of the Honda NSX and Porsche 911 Turbo. Three of this year’s premium crop would hose that force-fed Porker to 100km/h and two others would be snapping at its heels. 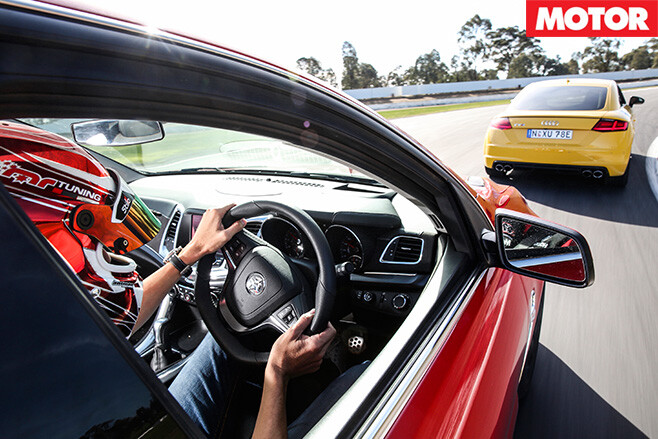 So what’s lining up this year? Well, having dealt with the cheap ’n’ cheerful brigade last month, this time we have a full Bunnings’ worth of serious hardware. Leading the charge are the current hot hatch kings, Audi’s RS3 and the Mercedes-AMG A45. The AMG took the honours in our comparison test earlier this year, but that means naught here. Both cars come with optional extras, the A45 housing a limited-slip differential between its front wheels while the RS3 is wearing wider front tyres and magnetic dampers.

Ingolstadt’s second offering is the new TT S. The base model impressed last year, firmly shaking off its ‘hairdresser’s car’ tag, and extra grunt and a sharper chassis are unlikely to hurt it around Winton. But, at $99,900, it’s hard up against the $100K price ceiling. Joining it in the pricing stratosphere is BMW’s new $89,990 M2, the first proper M-car to appear at BFYB since the 1M, built to a similar recipe but now even cheaper and even faster.

In order to maximise its chances BMW has sent along the six-speed manual, Oz-only Pure edition. Expensive cars rarely have enough Bang to compensate for their Buck, can Munich’s new turbocharged baby be an exception? 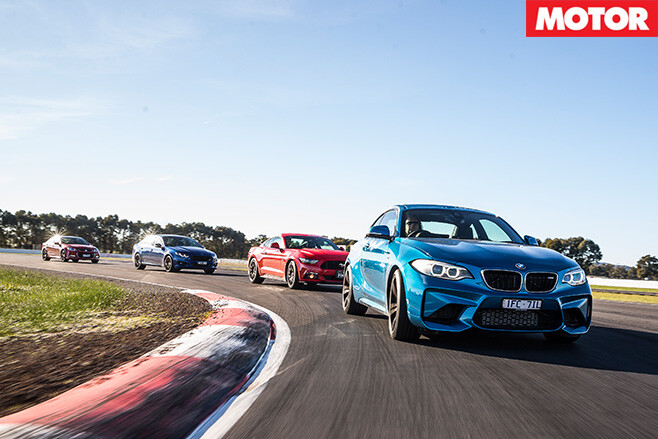 Joining it from the BMW stables is last year’s returning $50K-$100K champion, the brilliant M135i.

Our next contender also uses a turbocharged straight-six to send power to the rear wheels through an automatic gearbox, but that’s where the similarities end between the M135i and Ford’s Falcon XR6 Sprint. At $54,990, if the Barra-powered Bluey can run the numbers it’s supposedly capable of, it should be in with a shout, but based on our experience thus far, that’s a big if.

So, to the V8s. The XR8 Sprint was a late inclusion. Being no faster, but more expensive than its six-cylinder sibling, it was only ever going to finish behind it, but when we fell agonisingly short of securing a Focus RS (it was almost a matter of hours), it managed to secure a guernsey. Rounding out the Blue Oval brigade is an imported icon, the Ford Mustang GT. Packing 306kW/530Nm from its 5.0-litre V8 for less than $60K ($57,490 to be precise), it’s a strong proposition on paper. But few of Ford’s legendary pony cars, at least those lacking Shelby badges, have ever felt comfortable in a racetrack environment.

Its closest rival, both on price and performance, is Holden’s SS-V Redline. It’s a critical success and should fare well with the judges, but whether it can post strong enough numbers compared to its more powerful opposition to secure Bang glory is another matter entirely. One thing in its favour is its price tag; at $54,490, it’s the bargain of the group.

Last, but very far from least, is Chrysler’s 300 Core. The updated American brute finally has the eight-speed auto it’s always deserved, as well as some extra grunt (now 350W/637Nm) from its 6.4-litre Hemi V8. It’s a dead-set weapon in a straight-line with one of the best engine notes you’ll ever hear and it’s a lot better in the corners that you might imagine. It can also atomise its tyres at will – and all for $65,000. As ever, the judges won’t be evaluating the contenders on their ability as out-and-out track cars, but Winton does offer a safe environment for them to explore the outer edges of each car’s performance and dynamics. Luffy will be responsible for all lap data, while Morley and yours truly are in charge of straight-line performance figures.

So, in the fastest and most powerful Bang For Your Bucks field ever, which car reigns supreme? 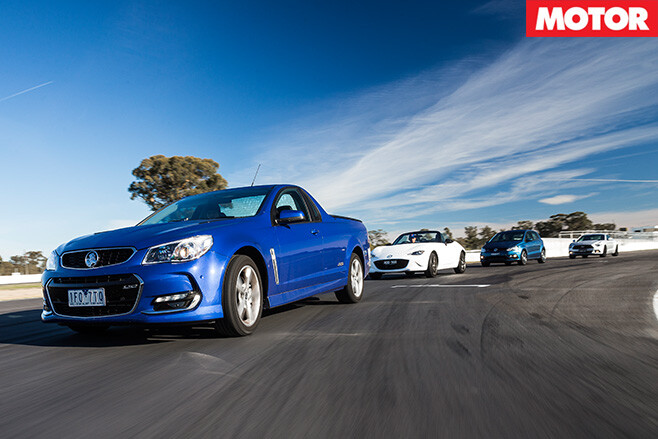 It’s the same old Winton but with a completely new surface. Winton’s 3.0km liqourice strap is dressed in sticky new tarmac following a recent $1 million injection from the local government to help bring the track up to global standards. The layout is unchanged, however the reprofiling of some corners, along with the smoother surface, should mean lap times will tumble compared to previous years.