The five reasons why the 2017 Audi TT RS is different to any of its rivals hide under its bonnet.

Porsche’s 718 Cayman S has moved on to a four-pot. Lotus’s Exige steals its heart from a Toyota Avalon. And while a Jaguar F-Type’s six has charisma, it won’t match the second-gen TT RS for grunt. 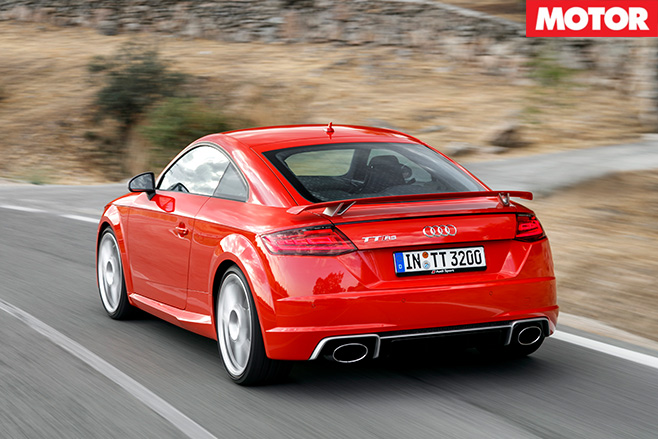 Audi hasn’t simply upped boost on an RS3 engine, either. For now, this new 2480cc turbo five powers only the top-shelf TT. It’s also a stripper. Now made from alloy, rather than cast-graphite iron, the material lightens the block by 18kg.

Other stuff, like a magnesium oil sump piece, lightweight pulleys, and hollow crankshaft, see another 8kg pulled from the TT RS’s nose. Audi’s engineers say this has shifted its centre of balance rearward by a per cent or two, now skewed 59 per cent front and 41 per cent rear.

Audi’s crammed more boost into to the new turbo, while it’s also reprogrammed the seven-speed dual clutch’s software to cut shift times. Firing power through the latest Haldex-based quattro system, the RS is claimed to clip 100km/h from rest in 3.7sec. 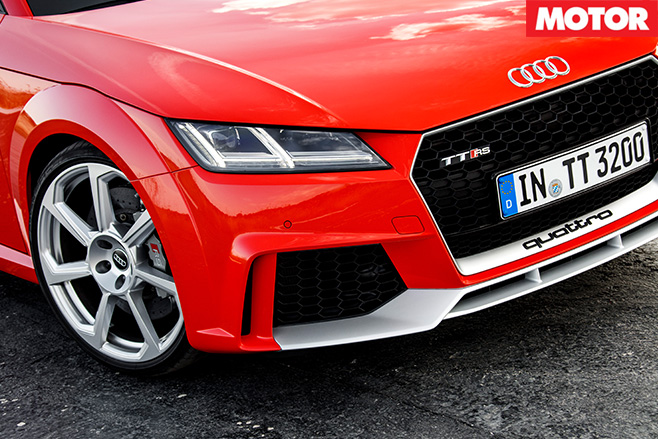 An engineer told us you’re squeezed by close to 1G during the first moments of acceleration. Does it feel like it? It is frightfully fast, but not organ crushingly so.

Mid-range, rather, is the five-cylinder’s party piece. As once the car clears the first few metres off the line, there’s an explosion of speed that lasts until the 7000rpm redline. To 150km/h, there’s a good chance the RS would hose anything this side of a Nissan GT-R.

Thankfully the diet hasn’t ruined the engine’s vocal pipes. It still sounds like a split Audi R8 V10 whether you have the new bi-modal exhaust flaps open or not. 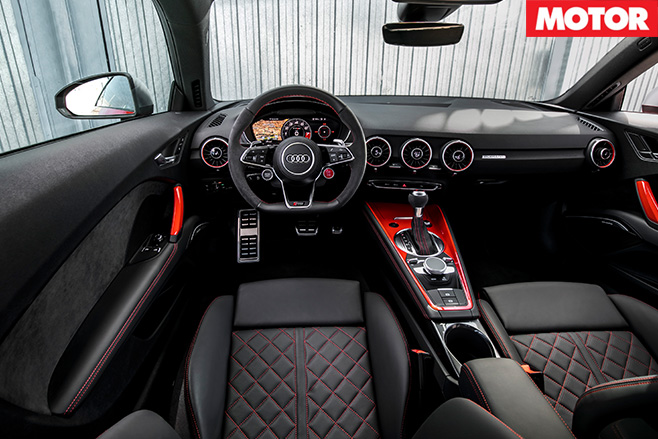 But while rapid, the drivetrain’s not all that refined. In dynamic mode it can be a little jerky to low-speed throttle inputs and would benefit from smoothing. It’s sleepy sometimes, too. Stomp the throttle while coasting in auto mode and the ’box needs a couple moments before it wakes up and drops a gear.

Of course, being Audi’s iconic sports coupe, there’s a fair bit of design work on the RS. Inside there are RS specific seats and an oh-so-cool steering wheel stolen from the R8.

Exterior-wise huge front air intakes hoover the road, and a fixed rear wing hangs off its rump. Oval tailpipes are another clue this is the big-daddy TT. 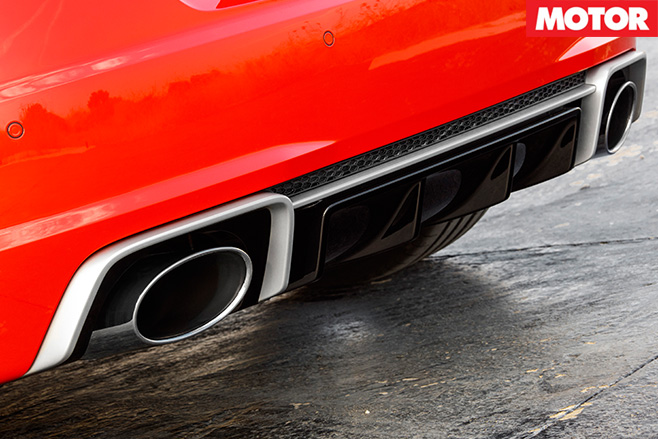 What it shares with other TTs is a wonderfully keen front-end. It points with laser-like accuracy and the variable ratio rack is seamless, but an extra 65kg around its waist slightly dulls the chassis’s responsiveness.

Front grip needs to be managed in tighter corners despite the fat 255mm-wide rubber all round. But it’s mostly a point-and-shoot affair in the RS, feed the power in early and it’ll simply lunge at the next apex with V8-shaming shove. 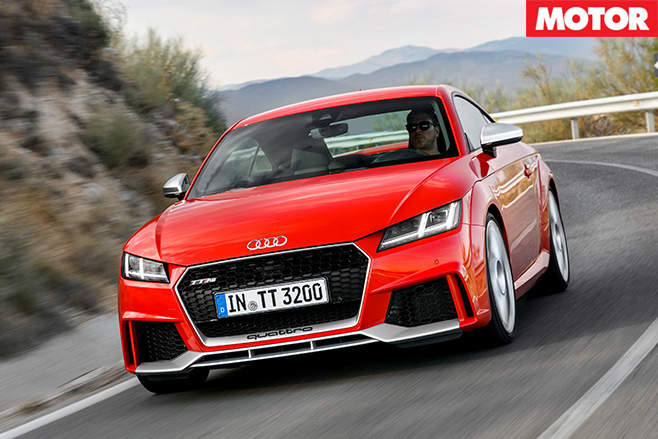 However, it feels like its engineers spent more time on its drivetrain than its chassis set-up. The TT RS is hugely fast, but we suspect it’s not as involving as what Stuttgart offers at this price (which will be $145K-ish, Audi Australia says).

On a winding back road, too, it’s hard to believe the RS would be any more effective than the wieldier, four-pot TTS. 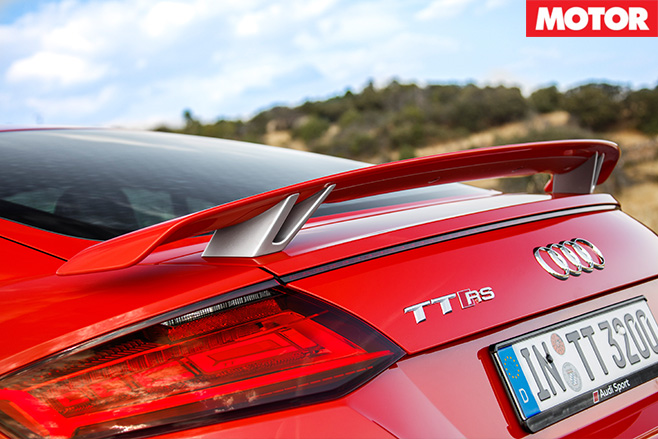 Really, what it all boils down to with the TT RS is that engine. So the question you need to ask, is it special enough to justify the $45K-ish stretch?

For sheer thrills and exclusivity, we think the five-pot is. And, oh, that noise. But when that point of difference is increasingly difficult to truly enjoy on anything but the Autobahn, maybe it isn’t.

One thing’s for sure, when the TT RS (and its roadster equivalent) lands mid next year in Oz, a head-to-head with Porsche’s new four-pot 718 Cayman S will help sound out the true answer. 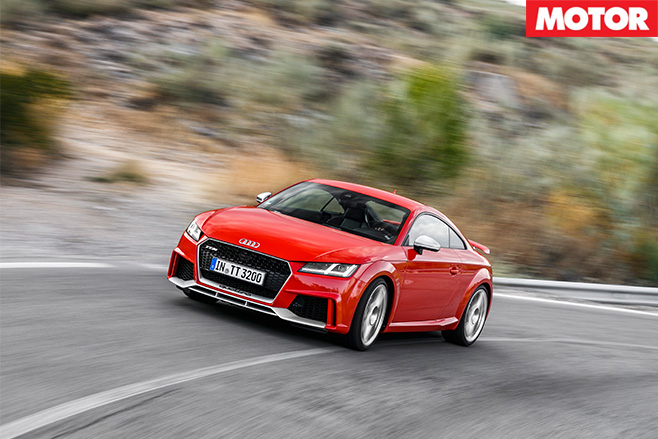 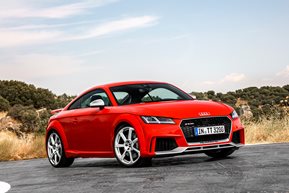