How would a four-cylinder Ford Mustang fare at its first ever Bang For Your Bucks?

It was tricky to get a sense prior to the event. Down on power, but down on price, and with 73 fewer kilograms between the front wheels, it was going to be interesting to say the least.
And interesting might be the most appropriate word to describe its dragstrip performance.

Pipped by three front-drivers for trap speed, the neutered ponycar even had the Polo GTI yapping at its hoofs across the quarter mile. Odd for something with 233kW and 432Nm – even in a car weighing 1629kg, not what you’d call gutless, on paper at least. But the reality is, it’s not particularly fast in a straight line. Which just seems odd for a Mustang. Not too long ago, that would be the end of the story. There’s a reason America’s most popular motorsport category, NASCAR, minimises the corners – traditionally, those in the New World haven’t been much interested. And their cars have reflected this with enormous power combined with live axles.

Not the Mustang Ecoboost. In fact, it’s quite the sorted thing in the cornering department. It tore around Winton third fastest for the $0-$50K class, beaten only by a sticky-tyred Peugeot and muscled-up ute – proving the Ecoboost is, in some ways, more than the sum of its parts.

The bum-o-meter confirms what the stopwatch says, all the judges having very nice things to say about the Ecoboost’s chassis. The steering is keen and direct, if lacking feel, and the rear-end stable, with a sniff of understeer if you ham it up – but otherwise it does everything you’d hope it to. And then some. And don’t think this ponycar is not up for bucking sideways either – it just takes technique. Feint the rear around in an S-motion on corner entry and boot it as the outside rear loads up, and you’ll be looking out the side windows so long as you don’t dare lift. One of the best feelings in driving, and the Ecoboost is only too happy to oblige.

Gripes? Aside from the unsettling philosophical implications of a four-cylinder Mustang, the brakes are too bitey in the initial few centimetres of pedal travel, the interior is low rent and the engine note splits opinion. It struggles price-wise, too, being Monaco-money in this company. So: a bit expensive, a bit odd, and a bit slow – that’ll be eighth, then.

But on track the Ecoboost was hardly out of its depth. It surprised us. With a tune and more power, it could be quite the thing. Or you could just buy the one with twice as many cylinders. Hold your horses for next month, in other words. JUDGES' COMMENTS
07. David Morley
“Sounds like a portable generator. Goes a lot faster than one, though.”

06. Louis Cordony
“Like a sausage roll without sauce. Good, but missing something.” 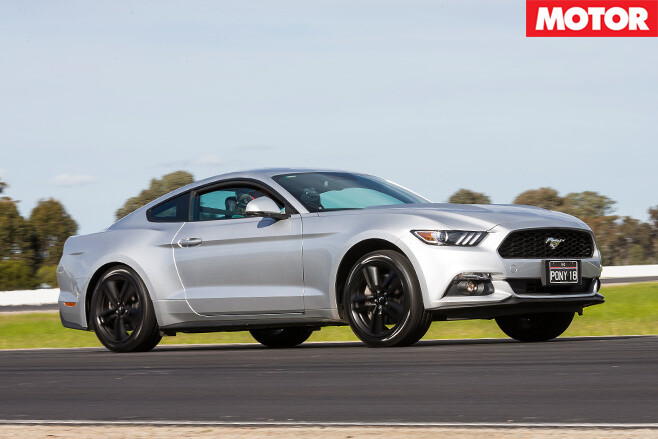 WARREN LUFF SAYS
08. “It has great handling and braking, but it sounds awful”

“There’s something very wrong about a Mustang having a four-cylinder engine. In saying that, it has great mid-corner dynamics; its handling is surprisingly good, particularly for such a big car.

“That said the steering really lacks feel – it’s very light and the feedback doesn’t give you the confidence to unleash the true potential of the car.

“It also has great brakes, but its engine is its weak point. Obviously it’s there for a price-point, but they could have done something better with the sound of it.”