One thing I’ve learned about Mazdas over the years is that ticking the box for the bigger engine option is not always dosh well spent.

Never was that more true than when dealing with the first NA series MX-5. Not only was the 1.6-litre original version all but as quick as the later 1.8, but it was also a smoother, sweeter unit. Save your money: get the 1.6.

But does that still hold these days? Frankly, no. While the new 1.5-litre ND MX-5 is sweeter than a sugar-coated puppy, the even newer 2.0-litre model is definitely worth the extra gold. I know what you’re thinking, 118kW isn’t a whole lot in 2016. And you would have been right, but the MX-5 concept is not of 2016 – it’s a dead-set throwback to the carefree, lightweight, less-is-more days when men were men and roadsters could jump puddles.

One drive of the 2.0-litre MX-5 is enough to prove that it’s appreciably faster and ballsier than the 1.5. Quick enough, in fact, to be considered quick enough. Lined up against the significantly musclier Cooper JCW, the MX-5 uses its rear-drive power-down to good effect to keep the Mini honest to 100km/h. The rest of the drag-race, though, falls to the Mini – but only by a couple of tenths.

Clearly, that lack of kerb mass is doing its thing (the JCW, itself no porker, is nearly 200kg heftier). What’s lacking for the Mazda is V-max through the traps, pointing, once again, to a car that is easy and efficient to launch from a standing start, if not actually that grunty. 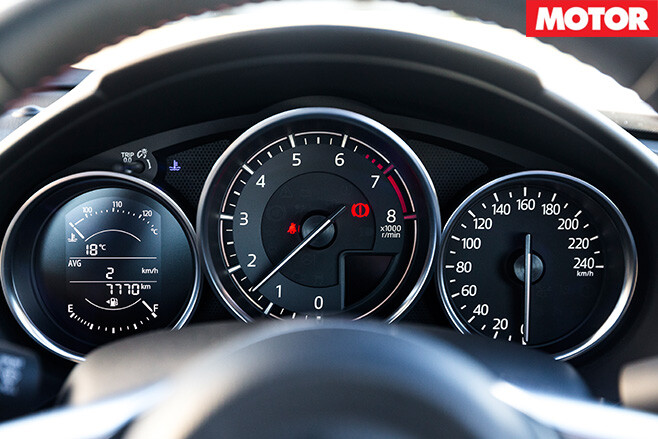 But a tractable engine and lightness can only achieve so much and, at Winton, that limit was reached with the others blowing by on sheer hump out of turns. The MX-5 was up there on corner speed, just not on velocity down the chute.

But man, is it fun. Yes, it moves around and it body-rolls more than most here, and there’s always something happening – and not always the same thing – at each end, but it delivers huge giggles in the process. The steering feels natural and all the controls are weighted just so; another traditional MX-5 long suit. It’s also the most analogue-feeling car here and one that us old blokes were quickly able to relate to.

Less pleasing is the wide centre console that eats into an already pretty tight cabin. But just like the SS Ute, which can carry a big load at high speed, when you can drop the top of the Mazda on the right day, you’ve just added a whole new dimension to the experience. You youngsters would do well to sample an MX-5 and discover what proper fun at the wheel really means. 01. Dylan Campbell
“Surely the most fun you can have with 118kW, had a ball in this thing.”

01. Louis Cordony
“Finely attuned to every one of your inputs. Cheek-popping fun.” WARREN LUFF SAYS
01. “The MX-5 is a real driver’s car – it makes you think about driving”

“In a modern world of electronics, the MX-5 is refreshing as it’s still very pure. It’s fun on the limit and you don’t have to be going that fast; it’s driving at its most basic.

“It slides, it has understeer and oversteer, it makes you actually think about your driving because there’s no electronics or sticky wide tyres to make up for poor driving.

“It’s sort of hard to get the lap time out of it because you’re trying to have that fine balance of under and oversteer and carry as much speed as possible, because it doesn’t have the power to make up for it.”