By the third generation NC, a muffin top bulged below MX-5’s tightening little shirt. No harm in eating the occasional airbag, it thought. A little extra chassis bracing at dinner, perhaps some speakers for dessert. Next minute, 1110kg, 170kg more than the NA launched in 1989.

But now it’s 2015 and the ND is here. The fourth-gen MX-5 scores two engines, one with grunt and one without, and it’s that latter one we’ve just punted on Aussie roads for the first time.

With just 1.5 litres, 96kW and 150Nm, Mazda could sell the engine to Janome for fitment into sewing machines. But, you see, the MX-5’s had lap band surgery.

Mazda went a bit nuts with the weight reduction, and fair enough when you think about the benefits to acceleration, braking, handling, fuel consumption, wear and tear on consumables like brake pads and tyres.

With increased use of aluminium over steel, and cutting steel by using higher-tensile versions, Mazda saved 20kg from the chassis. Meanwhile the razor was taken to the suspension hardware, 12kg saved there. The reinforcing ribs of the 2.0 engine block were thinned and reshaped, saving 8kg. The new gearbox and casing were delicately designed to spurn any unnecessary metal, saving 7kg. The diff housing was given the same treatment, saving another 7kg. Already we're up to 54kg - the rest is thanks to a shave here and a trim there, strategic employment of under-the-skin aluminium bits, and body panels themselves, and many other small tweaks

A lot of that surely came down to Mazda tightening the MX-5's dimensions back up. It's a whopping 105mm shorter than the NC (in fact, the ND is even 40mm shorter than NA), it's 10mm wider than NC, 10mm lower, and its wheelbase is 15mm shorter. Yet interior space has grown by the smallest of fractions. We’re impressed. 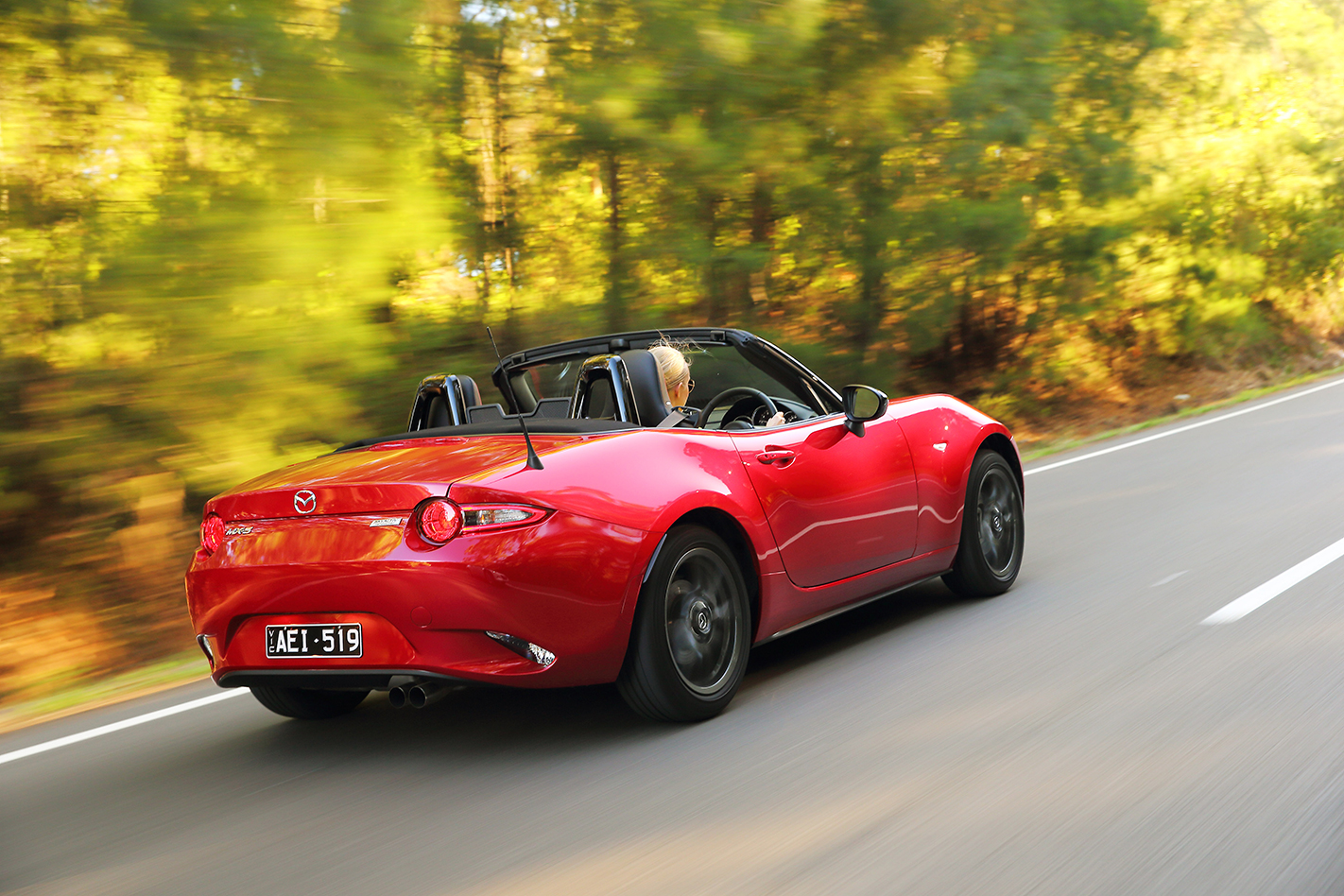 AAAND BREATHE IN
That said, slinking down into MX-5 Version 4.0, the first thing you notice is there's no steering wheel reach adjustment. Goneski, to save weight. Never mind, move the seat forward and you find it's tolerable, yet your legs (at least, mine, and I'm 173cm) weren't cramped at all. Or much.

Rather than being able to pull the steering wheel nice and close to your chest, it lives just in front of the instruments and you move your seat closer to the dashboard. And it's at that stage you realise, it's tight.

Mostly for better rather than worse, the gear lever feels like it's right next to your left knee. The rear vision mirror feels about 20cm from your head. Meanwhile you'd need to put the roof down to wear a helmet for track action. Unless you're a hobbit.

The ND’s interior is tight like the car’s been gently shrink-wrapped around you. Large Humans, this is definitely one car you sit in before purchasing.

That said, you're hardly rubbing shoulders with your passenger. In fact, the MX-5 is reasonably generous in its cabin width, so that the centre console is large enough for two cup holders and the entertainment controls. But in the driver's seat, you'll be chicken-winging your left arm to reach both. 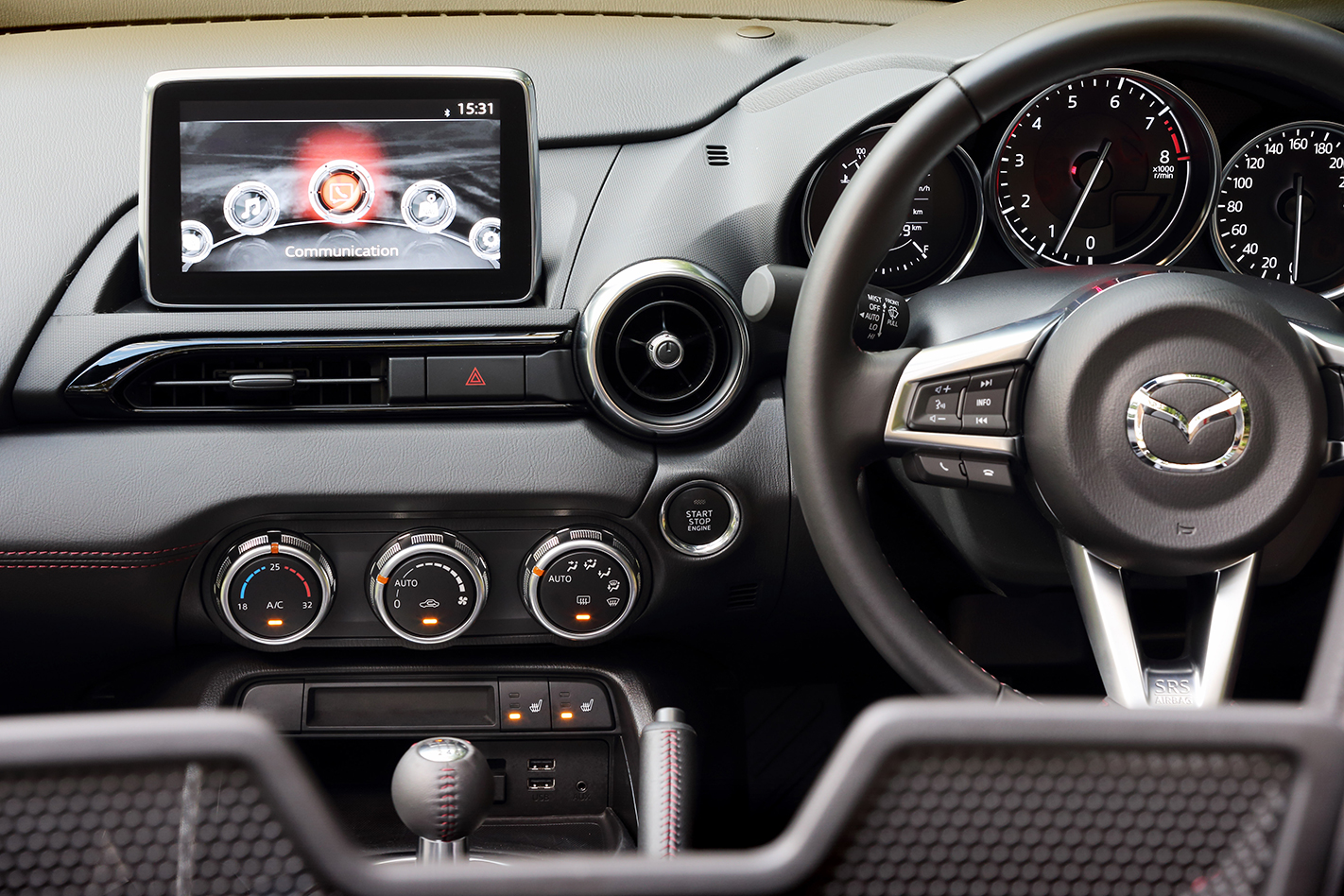 I'M GOING HOW FAST?
Okay, out on the road, let's get two things straight about the new 1.5-litre MX-5: it doesn't have much power, and it doesn't have much grip. If you're after something that, under full throttle, will squeeze you into your chair and hurl you at the horizon, the MX-5 isn't for you, particularly this 1.5-litre version. Come on, it has 96kW – a 147kW Toyota 86, which itself can struggle up a steep incline, has nearly 50 per cent more power. And if you want your face to distort in a high speed corner, because of Velcro-like grip levels, again, the 1.5 MX-5 isn't for you.

In fact, it would probably be a bit boring around a track like Phillip Island. But the core thing is – and this is important – it tries hard to keep the driver entertained, occupied and engaged at any speed under 120km/h.

Perhaps, being a road car bound by speed limits and all, there's a case for this being more relevant. The controls are satisfying to use, and feel natural and well calibrated, which is helpful, as you use them often. And while the power isn't mind-blowing, the revvy, naturally-aspirated engine is at least an enthusiastic participant, and sounds kind of good, but most of all, it suits the car's level of grip, of which there is more than the power could ever overwhelm.

But the interesting thing is, the lowly power and grip don't necessarily feel like shortcomings of the car, or downfalls. It’s impressive how the MX-5 takes low power, and low grip, and still puts a silly grin on your face. It feels faster than it is, and it says, come on, let's do this driving thing together. Unlike so many other performance cars, the 1.5 MX-5 goes out of its way to involve you, rather than isolate you in the process of driving (sort of) fast.

YOU'RE ITS BRAIN
The MX-5 is obedient to your inputs and commands as driver. And a lot of that comes down to the way the controls feel.

The electric steering is light but feels natural, honest and enthusiastic, imbuing the front of the car with a sharpness, a keenness to point. It’s really nice to use.

Meanwhile the gears are short (although given how slowly the engine is revving, they can feel oddly long), so you're constantly interacting with the gearbox, you've constantly got something to do, and this is a good thing, as the gear selection and pedals are a pleasure to use. The gearchange is short in throw, oily, tight, precise and easy to use. The clutch has plenty of feel, so does the brake, whose stopping power mightn’t tear the fabric of spacetime, but feels meaty and communicative.

Generally the controls feel ‘right’ and natural – perfect for confidence when driving hard, and help make the car feel like an extra-sensory extension of your body, rather than some machine that’s reluctantly doing as you ask. The result is that mysterious thing you'd be surprised is lacking in so many performance cars: connectedness. Given you're not going particularly fast, the 1.5-litre MX-5 is perhaps one of the easiest cars to feel confident driving fast. 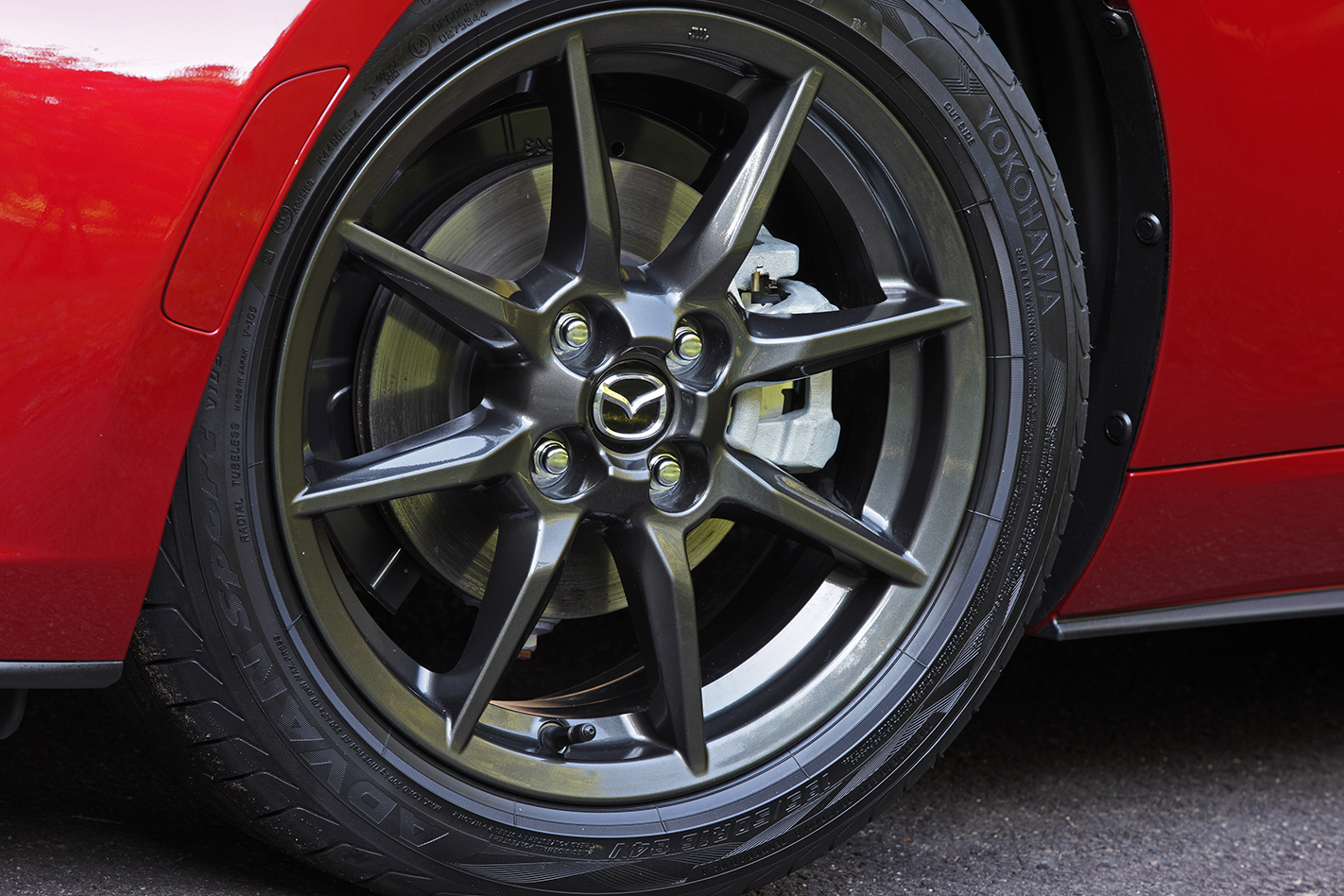 KEEP ROLLIN'
A tighter, slower kind of road will suit the 1.5 MX-5 best – and after just one or two corners, you’ll notice the MX-5 is softly sprung. It definitely doesn’t sit flat through corners.

It would be easy to pick on the MX-5 for its body roll, but the upside is not only an acceptable ride quality, but impressive compliance – drive the MX-5 fast up a bumpy road and it takes it in its stride. It doesn’t get upset, so you feel confident pushing. Of course, you’re not going that fast.

Sure, the MX-5 is on the softer end of the body roll spectrum, but it moves through its roll axes smoothly and naturally. It's a car that appreciates silky smooth inputs and would get upset by aggression. This is not a car you grab by the scruff and manhandle through corners.

THE FIDGETY TYPE
That said, while the MX-5's ride is far from firm and punishing, it's far from silky smooth. At all times, particularly on Aussie country roads, the MX-5's suspension is always transmitting something into the cabin. It could be called fidgety or busy, and never seems to relax until you’re on billiard-smooth bitumen. Perhaps this, combined with elevated general road noise, could be why the MX-5 makes you feel like you’re going faster than you really are. But they could also contribute to the MX-5 being a bit draining after a long drive.

Still on the topic of everyday stuff, we were impressed with the fuel consumption. Despite enthusiastic testing the trip computer reported 6.9-7.2L/100km. Of course, it could be optimistic, but it’s safe to say oil prices are unlikely to keep 1.5 MX-5 owners up at night. 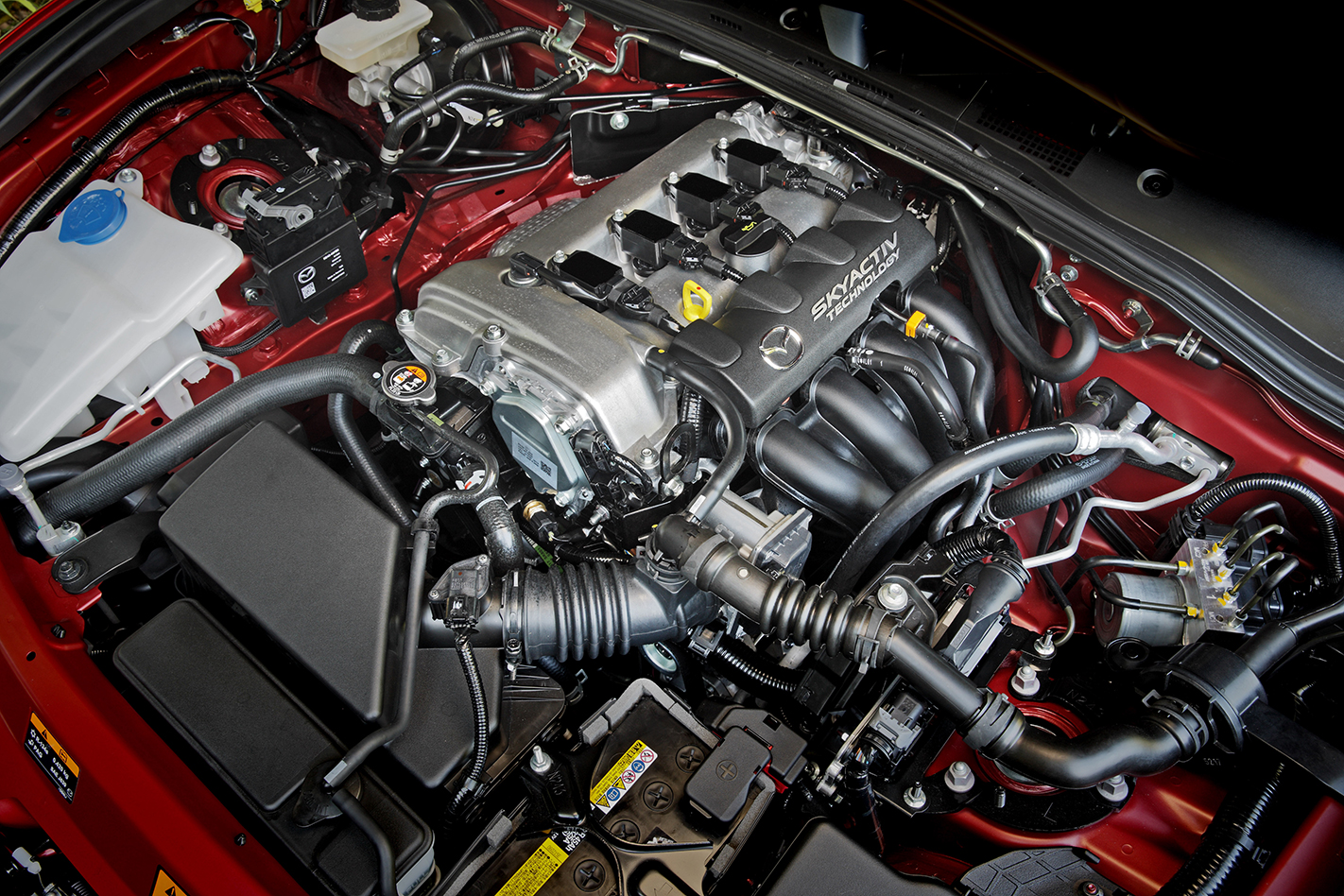 THE LAST LAUGH
In a world of cars obsessed with power, it's refreshing to drive something that's focussed more on the experience of driving, than excluding the human bit or substituting it with technology, in the name of simply going fast. The key thing with the ND 1.5-litre MX-5 is that it says, up front, 'look, I'm not going to blow you away with my power, but I'm keen to have fun anyway'. Drivers of all experience levels will get a lot out of the 1.5 MX-5. Perhaps more experienced drivers will be unable to resist at least browsing for stiffer suspension, wider wheels and tyres, and if not looking at forced-induction kits, regretting they didn't get the 2.0-litre. We haven’t driven that one yet, but with 118kW and 200Nm, we’re looking forward to it. It was perhaps fortuitous for the 1.5-litre that we drove it in isolation. With a playful, engaging, low-grip chassis, it underlined the argument that power isn't everything. Given the 2.0 is a modest $2500 premium, we'll hold off our final verdict on the 1.5 until we’ve had a crack in its more powerful sibling. A little extra power never did anybody any harm, surely?

Four out of five.

Click here to read the full range review of the Mazda MX-5. 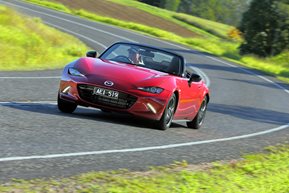