Car of the Year judging is a tough gig. It may not look like it, but an entire week of gruelling, unforgiving tests takes a lot of effort and co-ordination. At the centre of all the hubbub are these seven individuals, who between them will yell, swear, throw water bottles, and squabble over which of the contenders is worthy of the coveted Wheels Car of the Year crown in 2017.

So without further ado:

Avoid blood-level spikes in his caffeine stream and keep expertly engineered cars coming, and Carey’s an affable gent. But while this is a way of life in his adopted Italy, it’s far less do-able at COTY, in rural Victoria, where ‘baristas’ favour Blend 43 and a dynamic range encompassing “total crap” is a given. As a result, JC will reduce a dud spade to an “utterly effing useless attempt at a soil-shifting device.”

A comprehensive skill set has seen Inwood scale the motoring ranks with supercar pace. A graduate of the grind of weekly deadlines on Auto Action, the boy from Bathurst joined Wheels in 2013 and made his COTY debut in 2015. This year, as acting editor, Inwood steered the ship from the coveted COTY throne. The dunny, that is, where history dictates votes are tallied.

Ponch reckons his once steel-trap mind has given way to a softer wit, more like a fine French suspension or an absorbent undergarment; says it happened in early June 2008. On a Tuesday. Incisive road-test analysis delivered with turn of phrase to make Kevin Bloody Wilson blush. A solid penchant for shirtless dancing. Recent style suggests salmon out; ripped, Bros-inspired shorts in for season ’17.

The hard-charging Hagon has come a long way from his roots on Fast Fours & Rotaries and early motorsport exploits in the ’90s Suzuki Swift GTi Cup series. You’d know his dad, Will, if you’ve had even a passing interest in Aussie motoring over the past several decades and, increasingly, that’s also true of the clued-up, switched-on and enviably well-connected Toby.

Quite possibly a Westworld-style android modelled on Dustin Hoffman’s character in Rain Man, and preferring to go by the name of Maureen Glory these days, Byron is a constant star of his own Wacky Races episode. Having snatched the infectious-enthusiasm baton from Robbo, he also brings a century of car knowledge (and the menagerie of old shitboxes he owns) to the COTY table.

The rarest of Englishmen – one who hardly whinges and appreciates beer not served at the same temperature as tea. Knows his way around cars, thanks to stints on the UK mags that count – Autocar, Evo and Car – and, after countless laps, the way around the You Yangs. On day one fellow judges took to chanting a motivational ‘Up the Duff!’ to buoy the jet-lagged Mike, and it’s stuck.

Not known for suffering fools or beating around the bush, debutante Giusti brought a raised eyebrow to COTY, backed by broad PR and marketing experience with brands from Saab, Honda, Peugeot, Mini and BMW to Audi. Nads’ ability to cut to the core of a debate proved invaluable; recent time at the helm of mine trucks gave necessary context for her frequent verdict of ‘light’ steering. 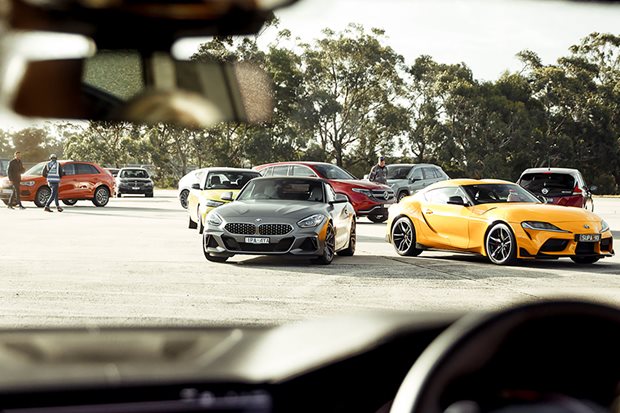