Wheels Car of the Year has been a constant fixture since 1953.

Over time, the format has been refined in order to give each year’s most deserving recipient the best shot at the title. First up is the selection process of cars that are eligible; this year that whittled the field down to 22 models. These are then judged against six criteria through three rounds until we end up with the winner. It’s as simple as that.

Actually, it’s not at all simple. It’s a massive feat of car-juggling logistics, impassioned arguments, long days of metronomic testing and a requirement to contextualise huge amounts of information. This year’s field had no odds-on pre-event favourite, which only made it more interesting. Any victory for 2108 would have to be scratched out the hard way.

So here are the nuts and bolts of how we arrive at Australia’s most coveted new-car award. Read it and you are fully qualified to point and laugh at the posters in the comments section who think an ineligible car should have won instead. All COTY contenders are measured against the five criteria listed below, and not each other. In addition to this, where applicable the entrants are judged as a range rather than individual models within that range. The car must be substantially new insofar as it has been introduced in the 12 months leading up to the WCOTY cut-off date and not merely a new engine or trim variant. That said, the last-ever Aussie built car to appear at WCOTY earned an exemption from that last point; we’re hard markers but not hard-hearted.

Complex and subjective, this is the toughest WCOTY criterion to judge. The objective is to assess every aspect of a car’s function, taking into account its intended role. Put simply, we’re seeking complete satisfaction. Every aspect of design is considered, always in relation to purpose and price: vehicle packaging efficiency; all-round user-friendliness, especially interior layout, flexibility and ergonomics; quality of materials and assembly; visual and tactile pleasure.

Driving dynamics take into account all handling characteristics and their fitness for the car’s role. We’re looking for sweet harmony in the interaction between tyres, suspension, steering and brakes.  Comfort must also be considered. Quality of ride on varied surfaces is a major factor, but seating and spaciousness, plus overall smoothness, quietness and quality of noise are also important. 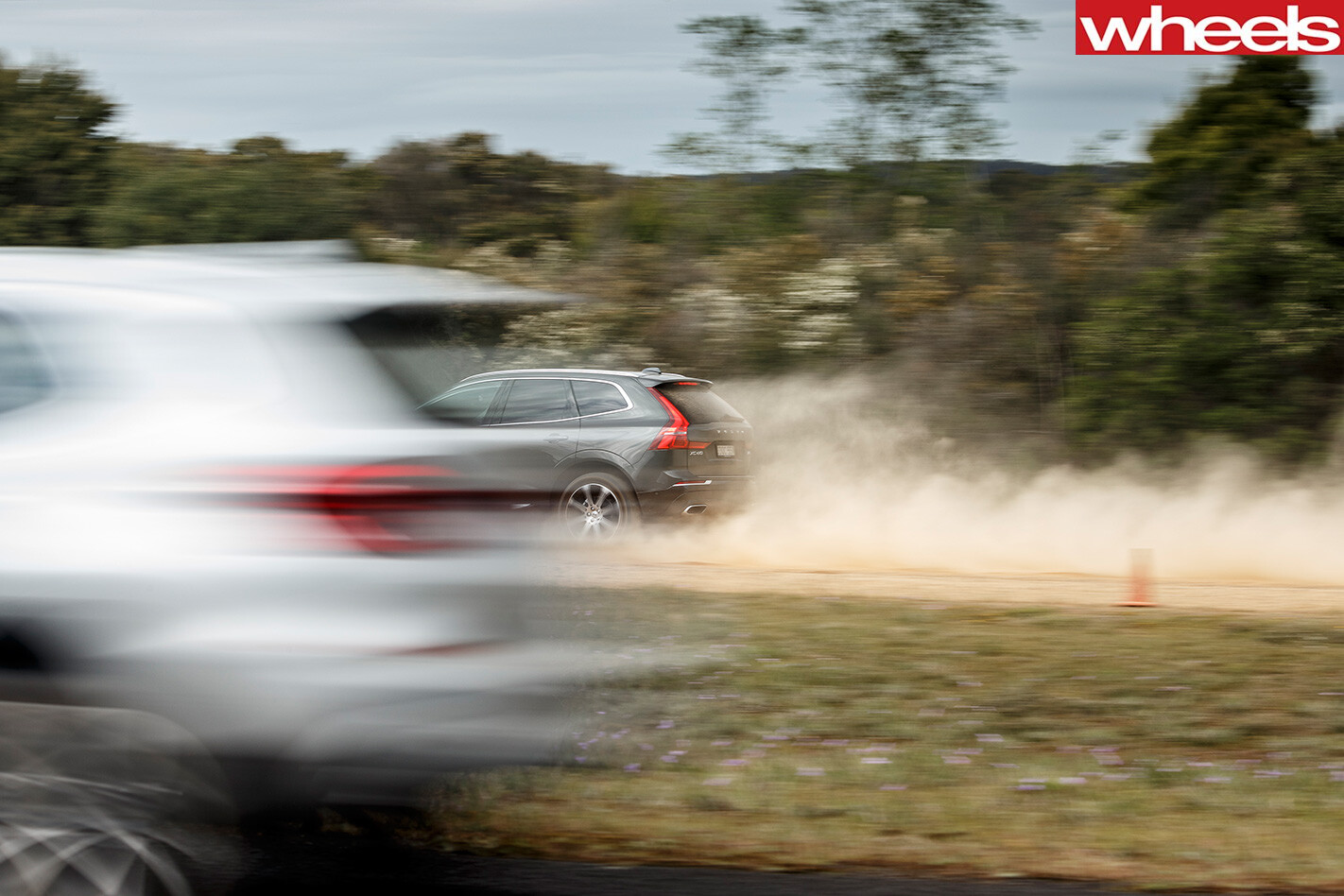 The assessment of drivetrain encompasses every aspect of engine performance and transmission behaviour. In the case of models with multiple drivetrains, special attention is paid to those offered in the most popular variants.

Remember that today’s state of the art is tomorrow’s ordinary. Important innovations are not common, but are recognised when a car maker does deliver. Incremental improvements rate only incremental adjustments to a vehicle’s score against this criterion. Technical advances in all spheres are assessed: innovative materials and engineering; core vehicle system enhancements; all-new features. Ignore the hype and excitement that often comes with novelty; the question here is whether a new technology can deliver genuine improvement in the driving or ownership experience.

In cases where a manufacturer fails to equip a car with a widely adopted and worthwhile technology – something that’s state of the art, in other words – its score against this criterion reflects the omission.

Our primary concern here is fuel efficiency. The real-world results gathered over the course of the WCOTY program and earlier road tests are given greater weight than the results of official, government-mandated tests. 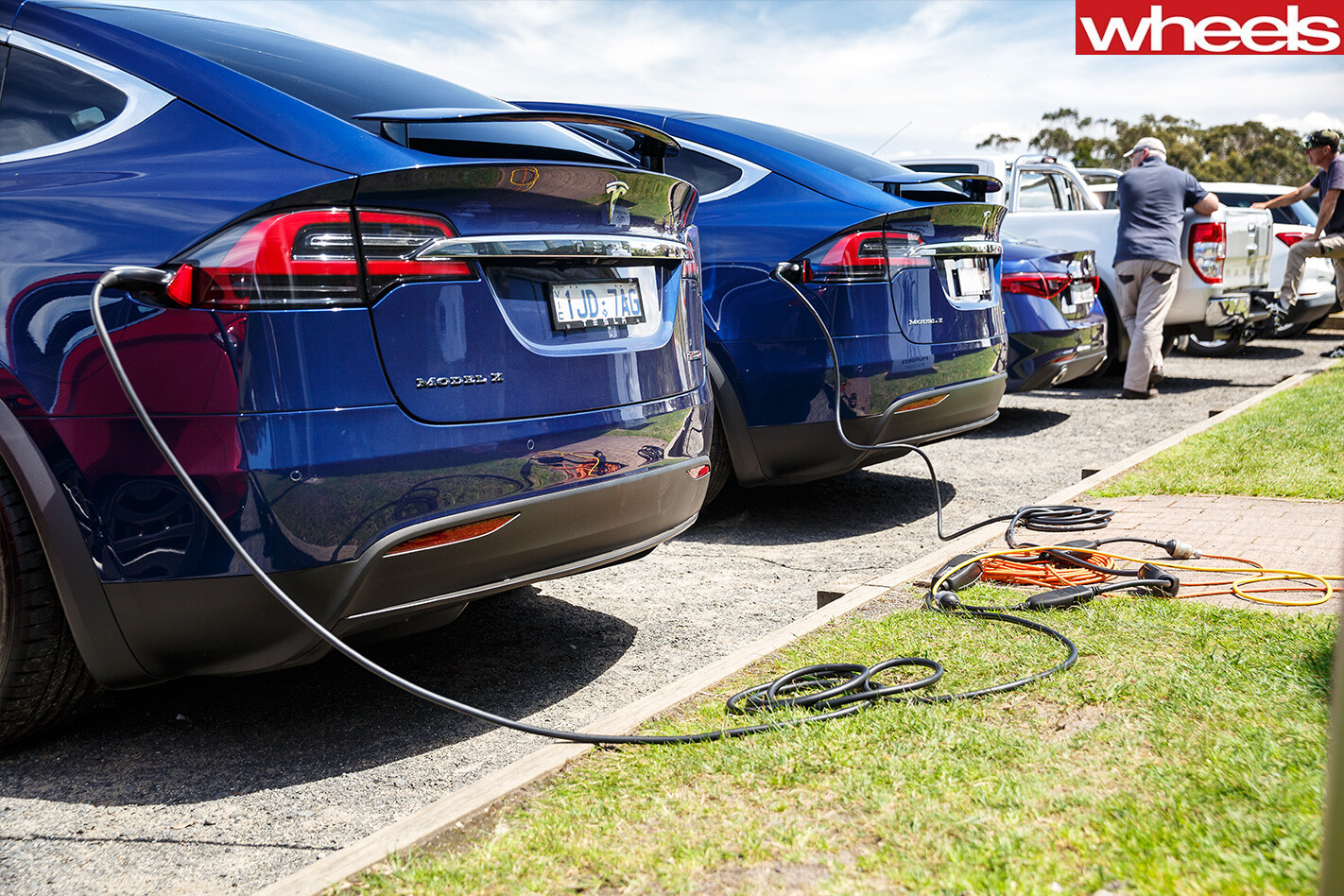 For any type of fossil fuel there’s a directly proportional relationship between the amount burned and the carbon dioxide emitted. So there is a very strong link between a car’s fuel use and its output of the gas that’s the main cause of climate change. The exception here is electric cars, which offer at least the opportunity to utilise zero- or low-emission energy sources. Their efficiency also translates to low running costs.

Energy consumption is the bedrock of the scores given a car for this criterion. But the number is fine-tuned upwards in recognition of outstanding and credible efforts to reduce energy consumption and emissions in manufacturing. This also includes measures to boost the use of recycled materials, where significant.

Passive and active safety are assessed separately before an overall score is given against this criterion. In both categories the fitment of advanced and effective safety technology is rewarded. The efficacy of some active safety systems, notably ABS and ESP, is assessed by judges during the WCOTY test program. Passive safety scores are based, where possible, on published data from independent testing. In cases where none is available, judges take into account a vehicle’s array of standard and optional passive safety equipment and the manufacturer’s past achievements in this field.

For both passive and active safety, the focus must above all remain on vehicle occupant protection technologies that work.

Affordability is the big thing here. But we’re seeking excellence, even at the lowest prices, and above average engineering and design at any price. A bad car may be very cheap, but never cheap enough to be good value. And an expensive car that’s not extremely good is even worse.

WCOTY judges assess how the car compares with its marketplace peers for space, quality, equipment, refinement, comfort and competence. They must also take into account running costs, including predicted depreciation and maintenance. The price of any special efficiency tech is weighed against the degree of cost reduction it brings, and scores adjusted accordingly.

After a short presentation on each model’s genesis, the judges inspect its every orifice. That includes exterior and interior design, packaging efficiency, seating, cargo space, versatility.

Slippery sand over hard-packed clay, and a slight crown. It is used to assess handling and ESC effectiveness.

Full-force panic stop at 80km/h on a silty surface that can become muddy in wet conditions. 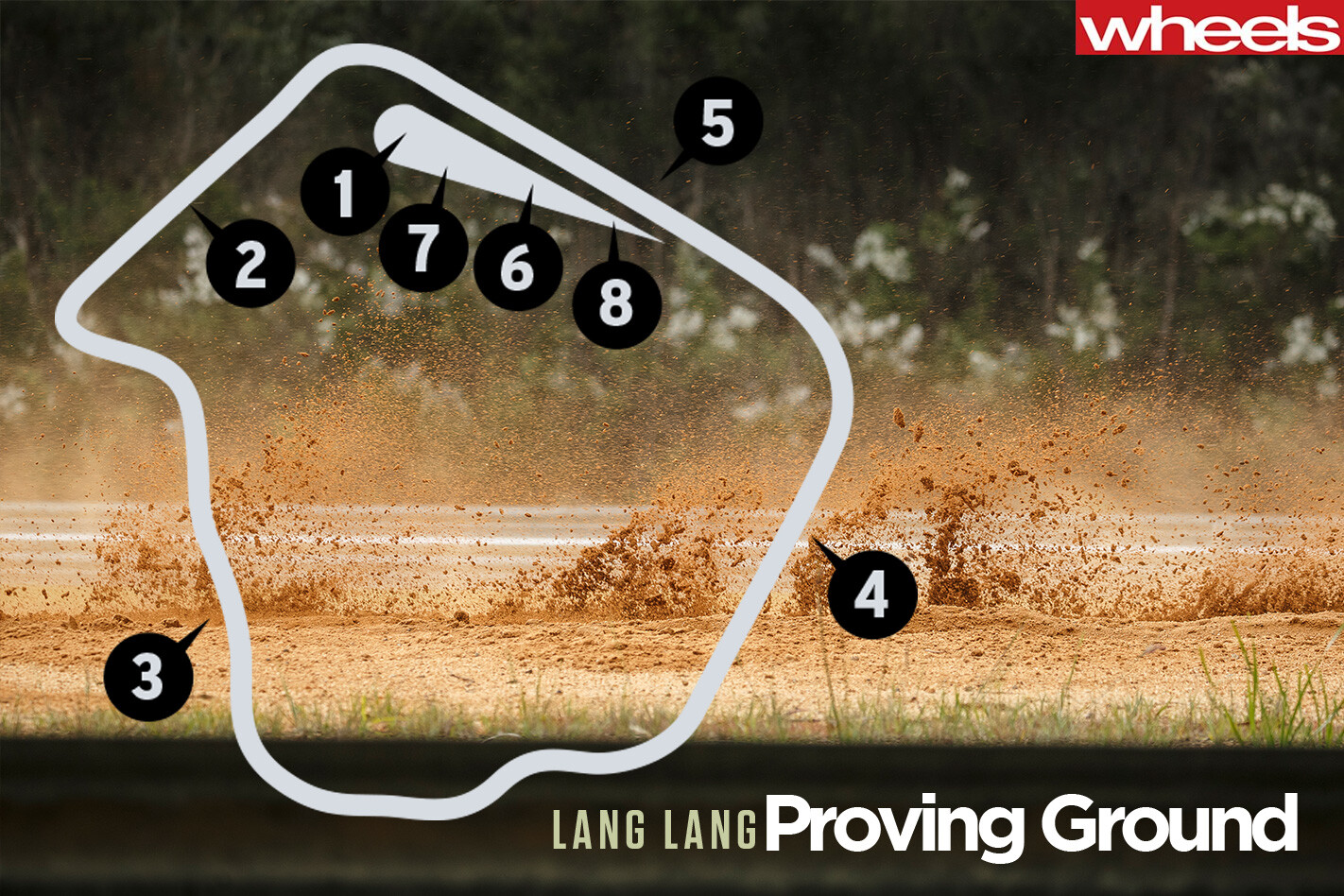 Potholes, patches, lumps and bumps driven at a steady 100km/h reveal plenty about a car’s ride, stability and rigidity.

Autonomous emergency braking-equipped cars have their sensor smarts appraised by two towed rigs that use the rear ends of real cars.

Keeping John Carey’s immortal “monotonous repetition is the foundation of great road testing” mantra foremost in mind, WCOTY’s road loop is all about retracing the same roads, at roughly the same speeds, in every variant that makes its way into stage two. 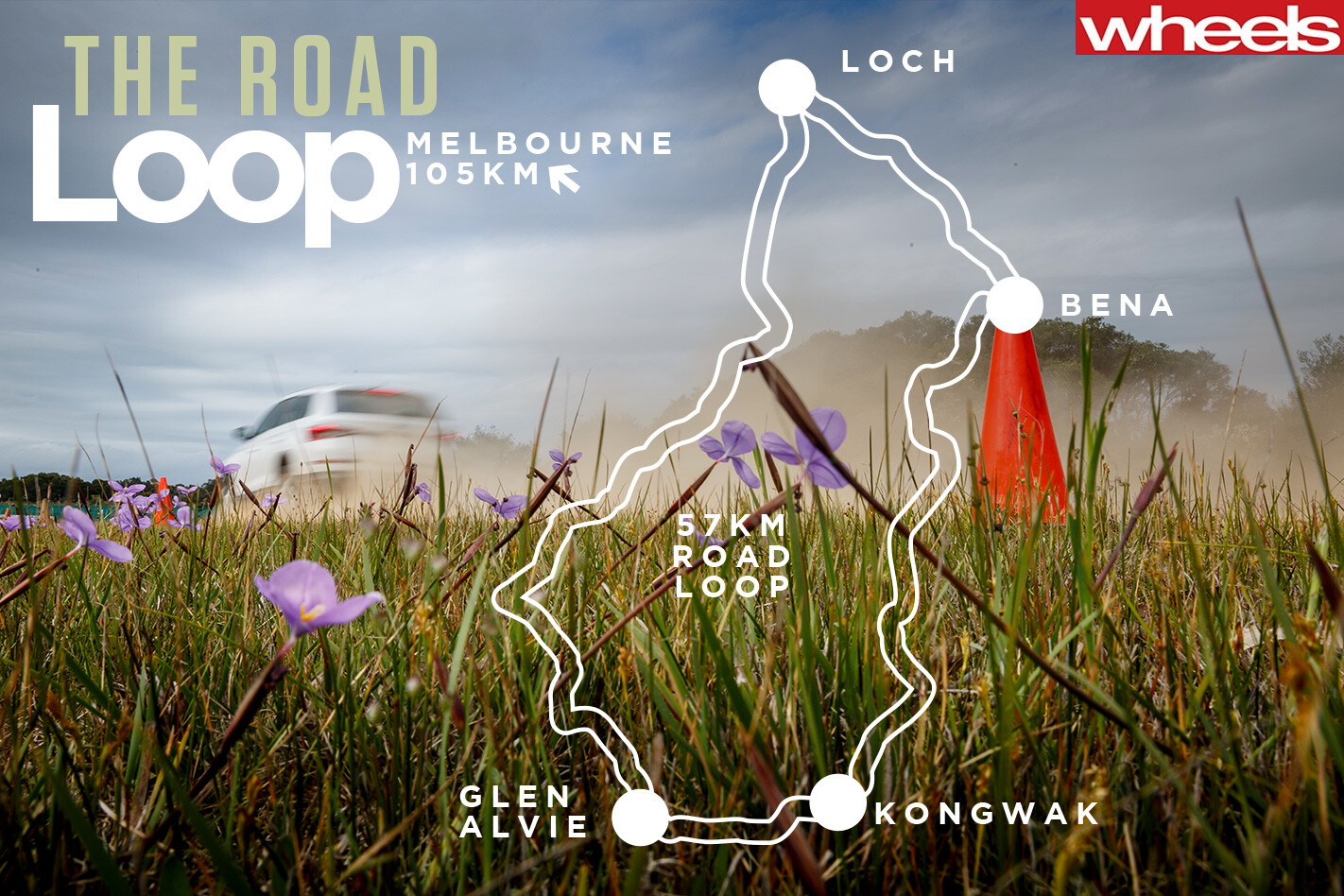 Deviating slightly from our previous route due to the implementation of 80km/h limits in former 100km/h zones, the road loop starts in the charming village of Loch, transitioning from a 50km/h-limited suburban street directly into the topographically challenging 100km/h-signposted turf that is the Loch-Wonthaggi Road. A driver change just after the roundabout on the sinuous Bena-Kongwak Road introduces an even lumpier surface until emerging in the hamlet of Bena.

Then it’s left on the South Gippsland Highway – a great test of engine torque, cruise control and driver-assist systems – before returning to Loch. In all, 57km of blissful repetition, to the varying tune of tyre hum, engine revs and judge’s opinions.