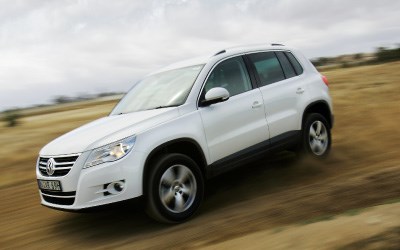 While other manufacturers have been trying for years - and in some cases, over several model cycles - to build a compact SUV that meets the criteria observed by COTY, none have made it to the final hurdle.

Then along comes Volkswagen with the Tiguan, its first attempt at such a vehicle, and slots it straight into the final handful of COTY contenders. Make no mistake, the Tiguan isn't just a very good soft-roader, it's a very good car. So how did it come so close, and what stopped it from snatching the trophy?

First impressions, it must be said, weren't particularly good. VW's styling department have provided a somewhat anodyne interpretation of a smallish wagon that nevertheless appealed to Carey's astringent tastes: "Pert and (for the genre) reasonably pretty; benefits from restraint in surfacing and detailing," he enthused. However, it left others, such as Tander - "has a very long bonnet with rest of car squashed towards rear" - ambivalent.

What couldn't be ignored was the Tiguan's apparently tighter-than-usual dimensions, which would eventually come back to bite, dashing its COTY hopes. Compared with the Subaru Forester, the only other compact 4WD in the field, VW's effort appeared somewhat truncated. But looks can be deceiving. While the VW is indeed 170mm shy of the Subaru's overall length, it's slightly wider, just 7mm lower and rides on a wheelbase only 11mm shorter.

The result, however, is a cargo area that's undeniably tight, leading Stahl and Bulmer, the most recent breeders on the judging panel, to phone spouses and request pram dimensions (I kid you not), to see if they would fit in the Tiguan's 1.07m-wide boot. Turns out they did not, but other judges chose to focus on things like the Tardis-like rear legroom, the reach- and rake-adjustable rear seats, and the stylish interior finishes.

Out on the You Yangs torture chamber of roads and tracks, the Tiguan's abilities came into sharper focus, with some intriguing mental comparisons. "A GTI SUV, or what?" noted Stahly, who also deemed the road manners "overall nice, very car-like ... Golf-like, even". Newton went a step further, asking whether the 147kW, petrol 2.0-litre turbo was "better to drive than a WRX?"

The fact was that none of the three Tiguans driven - a 2.0-litre 125kW petrol, 103kW 2.0-litre diesel or the beefed-up 147kW 2.0-litre petrol - failed to impress for their handling, steering or braking. All three managed short stopping distances on the gravel and wet tarmac, while the stability control quickly sorted things out on slippery surfaces without shutting down the power completely.

Of the three, the low-pressure turbocharged, direct-injection 2.0-litre petrol, with manual transmission, was the most impressive, simply because it offers such strong performance for its $33,990 price. Or did, until, under the guidance of editor Bulmer, it ground to a halt with painful ratchetting noises coming from the front end indicating a driveshaft problem. Nevertheless, when the votes were tallied after three days at You Yangs, the Tiguan was easily voted through to the next round of driving. A replacement 2.0 TDI was requested, and supplied, although this version came equipped with the six-speed automatic.

So it was on to the road loop to continue the battle with the remaining six semi-finalists. As ever, this can be the most telling of COTY disciplines. With on-the-limit handling, braking and acceleration completed, Stage Two emphasises strengths and weaknesses already identified, while unearthing valuable insights that may have been missed in the proving ground cut and thrust.

Two things immediately came to the fore in the Tiguan's case. One was confirmation that this must be the world's best-handling compact SUV. Forget about excess body roll and understeer - the Tiguan points, grips and steers better than many hatchbacks or sedans. Backed by effortless performance from the 2.0-litre engine (the 125kW version, that was; the 147kW was left back at base) or the grunt of the diesel, it meant, in my own words, "there's no reason to buy a BMW X3 (still!)"

But the other aspect of the Tiguan's on-road behaviour that focused attention was the ride quality, which drew the worst of Robbo's single-word condemnations, namely "unacceptable!" Strangely, the petrol-powered version seemed even stiffer than the diesel, despite Volkswagen claiming that suspension settings were broadly similar. After much head-scratching it was decided the difference had to be in the different tyre brands (Pirellis for the petrol, Bridgestones for the diesel), despite the actual tyre specs and pressures being otherwise identical. Both rode with a knobbly lack of comfort, jolting back-seat passengers in particular and going some way towards explaining the Tiguan's excellent body control.

In other respects, Tiguan occupants are extremely well looked after. The rear seat is a ripper, certainly offering better leg room than the mid-sized sedans that also made it through, and despite occupants sitting high enough to look over the front headrests (a bit like in the Golf, which contributes some of the Tiguan's DNA) there's still plenty of head room under that high roof. The doors open wide for easy access, there are cupholders galore, a glovebox with its own cooling facility and plenty of air vents. In short, as well as being fun to drive it is also easy to live with.

Except for the lack of boot space, which ultimately swayed most judges not to vote 'Tiguan' when it came to choosing a COTY 2008 winner. In terms of technology (especially drivetrain), functionality, environmental friendliness and other COTY criteria, it ticked most boxes. But surely, most thought, a nominal off-roader destined for suburban family duties needed more sheer volume to cart gear in the rear? "I have major reservations about the lack of luggage room," Bulmer wrote at the last. Clearly, despite the Tiguan's otherwise excellent packaging and abilities, it was on the mind of other judges as well. 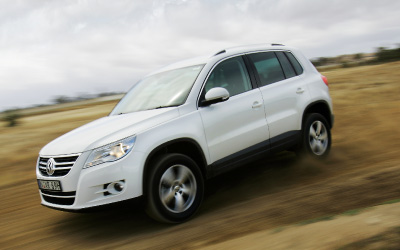 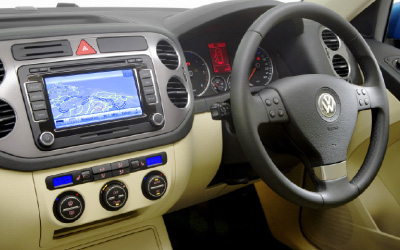 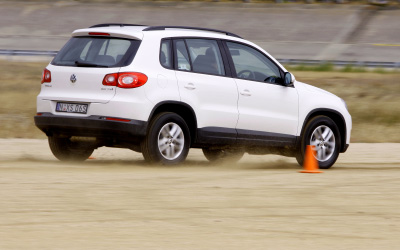 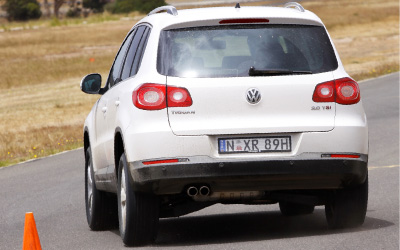