COTY threw up some fascinating contrasts this year, but none as compelling as the familial clash between our pool of Mercedes-Benz C-Class coupe and cabrio variants. The outlying C200 rag-top and C63 S AMG Coupe were separated by nearly $80,000 and 240kW and the personalities were spread just as far.

The basics build on the C-Class sedan, with the usual trade of less practicality for an increase in style and exclusivity. Cabin architecture and design is as impressive as the four-door and wagon – although with an obvious reduction in rear space – but the dynamics have moved up a notch, certainly in the Coupe, which rides and handles with noticeably more polish.

The 375kW C63 S was one of the outright stars at the You Yangs handling course, demolishing it to a V8 soundtrack as hard-edged as anything that’s been developed there, yet also possessing a sensitive side when dialled down for everyday duties. But it also wears a correspondingly serious pricetag, one that we struggled to get our heads around: $162,115 is a serious chunk of change for a C-Class, even one that can almost pace an Audi R8. 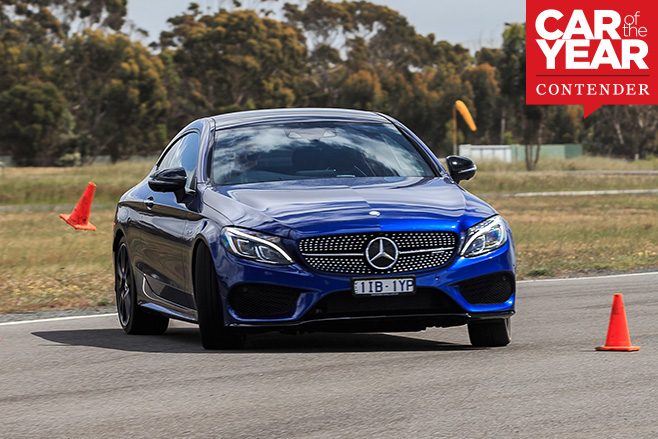 Which is why the new AMG C43 exists, of course; a smaller V6-powered sister to provide lesser thrills and without the hand-built heritage of the C63. As in its other applications the engine is a cracker: not as viscerally thrilling as the bigger V8 but keen to rev and – with 270kW – still properly fast by most people’s standards. It rides better than the C63 too, and vastly better than its GLC sister when asked to deal with the vagaries of the durability circuit. It’s hard not to turn to statistics to compare the two AMGs, but while the C43 has only three quarters of the engine and two thirds of the pricetag of the C63, it offers a far higher percentage of the driving experience.

But moving down the range brings more disappointment. The C300’s four-cylinder 2.0-litre turbo manages a respectable 180kW, but turns thrashy when extended. The chassis lacks any go-faster encouragement, firmer than the sedan but despite the standard adaptive dampers, low-speed ride often feels bumpy, and little genuine feel gets past the steering’s electric assistance. It’s a sports-free coupe. 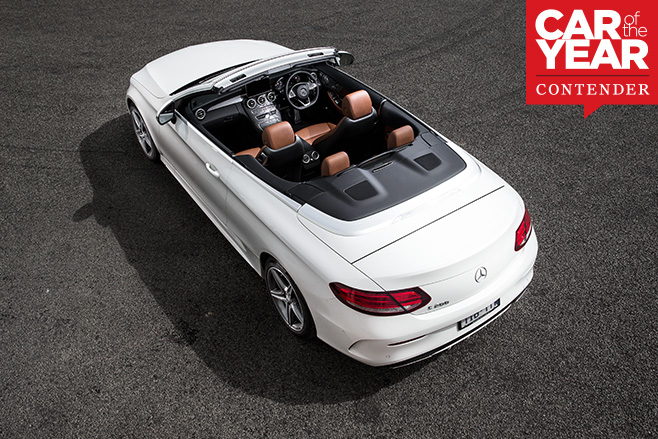 The C200 cabriolet has a more relaxed dynamic demeanour which suits it well. Merc certainly charges a hefty supplement for the roofectomy – the $85,900 C200 cabrio is $2600 more expensive than the C300 Coupe, with the 135kW base engine having to work against a 125kg podgier body. It’s definitely better suited to wafting rather than whapping, but it does gentle progress impressively well roof up or down thanks to a noise cancelling hood and the ‘Aircap’ system – wind deflectors that pop up above the windscreen. These look slightly ridiculous when deployed, like the car is wearing a toupee, but work well to eliminate buffeting.

It used to be obvious that Mercedes spent as much time developing the cheap variants as the expensive ones – they’d be slower and have less kit, but the fundamentals would be just as good. These days, and especially with the C-Class Coupe and Cabriolet, that no longer feels like it’s the case.