No shame in come second in a PCOTY field this strong

Drive any Porsche Cayenne, from the base-model to the Turbo S, and it’s the GTS that hits the sweet spot.

Do the same with the entire Panamera range and an identical result crops up. So you can imagine that hopes were high for the Cayman GTS before anybody had even driven it.

Mind you, any Cayman is odds-on to be a pretty decent way of getting around, what with that gorgeous flat-six mounted in the middle, a front-end that yaks like a neighbour over a paling fence and an inherent balance that dares you to try to unload it, even at track speeds.

And, all that applies to the entry-level version, so adding some more kit, rubber with more grip and a bigger serve of kilowatts can’t do any harm, can it? Indeed.

Jump into the Cayman and – super-low-slung seating aside – it is perfection. There’s a level of quality apparent in the Alcantara and plastic that very few competitors can get close to. The stitching on the dashboard, for instance, is straighter than an FBI Christmas card.

Fire it up and the flat-six sounds urgent and kind of wholegrain, but smooth (if that makes any sense). The bellow when you hit the active exhaust (‘das racket-flappen’, in its native German) also promises many hours of fun going back and forth through tunnels and underground car parks.

It’s more than just fits of giggles, too; the steering is among – if not THE – best in the business. There’s just enough wriggle through your palms to tell you all you need to know about the road surface, and equally, there’s also just enough weight to fill you in on your current yaw and G-loading.

Throw in the sight of the two front guard-tops doing that old-timey Porsche thing of bobbing along in front of you, and you have a car with more tactility than a sandpaper singlet.

But don’t let the overt fun and feel of the Cayman GTS fool you; oh no, wind it up on a racetrack or dragstrip and you soon discover this ain’t no toy. The first 100 clicks arrive in just under 4.5 seconds, while the full quarter-mile occupies just 12.7 seconds of your valuable time, at which point you’ll be heading for jail (gaol, in my day) at a bit over 177km/h.

Attack the track with something like Luffy filling the space between the wheel and pedals, and you’ll lap Winton in 1:37.7sec, or fourth fastest of this lot. And when this lot includes the new 911 Turbo and potential track day heroes like the new M4, that’s nothing short of amazing.

It’d be even faster with even more grunt. And while there’s no question that the chassis could easily cope with more snot, that’s missing the point a little. See, the Cayman is all about that elusive commodity: balance.

<p">And if you tune into its wavelength and make the most of that balance, then the Cayman GTS offers up performance that will only leave a complete philistine wanting more.

Now, I seem to remember when the first Cayman S was bashing through the 13-second barrier, and marvelling to anybody standing still that this was, indeed, a mighty effort for the 911’s poor relation. That’s a twisted view, of course (my speciality, I’m told) and I have to admit that calling the Cayman a poor relation to anything is selling it short beyond belief.

In fact, there’s an argument that, these days, with the ever-higher price of admission to the 911 club and the extra weight and width of same, the Cayman GTS has been elevated to a higher post than ever before.

See, at $166,390 and with all the ability and purity it encapsulates, the big question anybody with half a brain will ask when they step from a test drive in a Cayman GTS is this: “Do I really need a 911 these days?” And that, folks, is the motoring leap of the century. 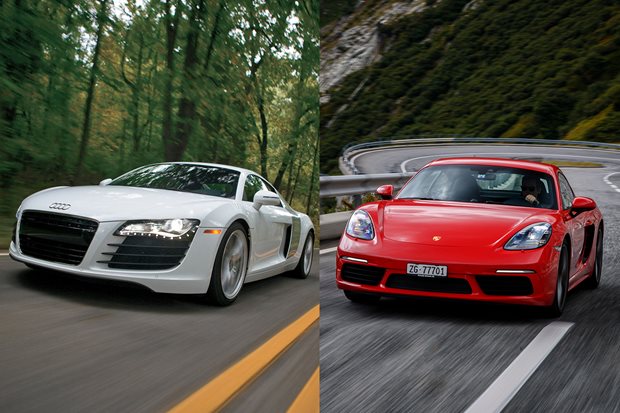 It's German coupe v German coupe, though with two distinctly different takes on the segment