YEAH, sure, look, all right. Showing up for a PCOTY packing less than 100kW in 2015 is like admitting you voted for Rudd and Abbott at the same time.

Hell, the BMW i8’s second motor is almost more powerful than the entire Mazda MX-5. But if your mother has told you once, she’s told you a hundred times – always wear clean underwe… err, never judge a book by its cover.

The cover, in this case, is a lightly specced manual MX-5 sporting a 1.5-litre SkyActiv inline-four without a turbo or supercharger in sight. The whole shooting match might only weigh 1009kg, but its power output was always going to limit it in the final figuring.

And yet the number of judges who sat around agonising about where it should be ranked, and the overwhelmingly positive sentiment from everyone who drove it, is testament to how much fun everyone had with it. Mazda swore it would get back to the ethos that made the 1989 NA such a revelation, and by gum, it’s pulled it off. Delicate steering, engaging balance, a plum driving position, a willingness to be pushed right to the very edge, all underpinned by a civility that allows it to be easily used day to day – the MX-5 can hold its head high in the midst of this prestigious key bowl.

A couple of judges remarked on how supple the suspension tune is; a competent shock and damper tuner could definitely eke out a gain here. Letting the little engine breathe a bit better would also help its cause.

DECA is almost custom-made for the MX-5, of course, and the touring stages, too, kept the MX-5 high in the hearts of everyone who drove it. A run down Mount Buffalo chasing the more fancied Mercs will be a personal highlight for many, many years to come – so much so that the hunt for an early-model MX-5 is officially on. Ultimately, a lack of firepower kept it down the order – and perhaps a bit further down than most of the judging panel is, in their heart of hearts, comfortable with. PCOTY is as much a numbers game as it is a best-on-ground contest, though, and the Mazda’s 0-100km/h dash and lap time dragged it towards the bottom of the rankings.

We can only imagine how good an MX-5 that’s 10 per cent better everywhere – stiffer, lower, lighter and more powerful – could be. The 2.0-litre car should be eligible for a return bout in 2016, and with the impending MX-5 Nation’s Cup series, this book will only get better with every reading. 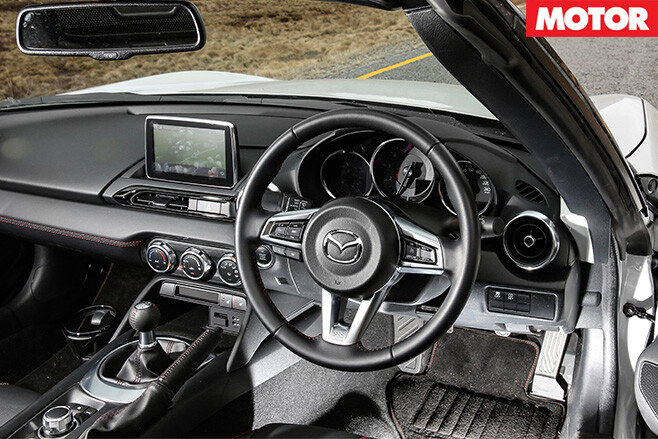 JUDGES' RANKINGS
Dylan Campbell: 8th
“There are certainly faster cars, but I do appreciate the lengths it goes to entertain”

David Morley: 10th
“Deserves to have all the impact of the 25-year-old original MX-5. Probably will”

Scott Newman: 7th
“Cheap and very cheerful; possibly most fun of the lot on track thanks to wild oversteer tendency”

Tim Robson: 5th
“OMG, what an utter delight. Playful chassis, loads of feel, maybe a mite too soft for my taste”

Warren Luff: 8th
“If this was BFYB, this thing would be an outright winner for sure. Crying out for another 100kW”